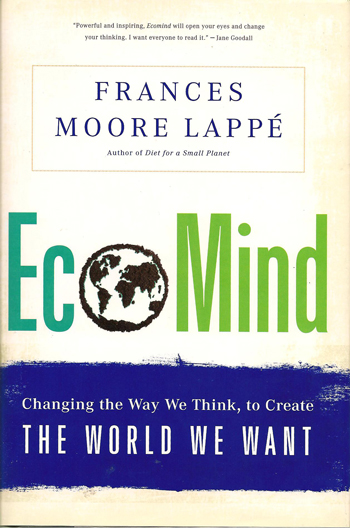 The first book I ever read that explicitly addressed environmental issues (besides a Barbara Kingsolver novel) was my AP Environmental Studies textbook in high school. Each chapter followed a similar format: explain how a certain part or type of our ecosystem is supposed to work, explain all the ways in which we are ruining it and the dire consequences, and close with suggestions on how we might be able to avert disaster. It was an incredibly depressing class. While it galvanized me to change the way I live my life, I watched many of my classmates turn into cynical pessimists. “Why even bother?” they asked.

Consider EcoMind by Frances Moore Lappé the antidote. Lappé brings a strong set of credentials to the task of dismantling our fatalistic views of humankind. She’s the author of the seminal 1970’s bestseller Diet for a Small Planet, which introduced us to the outsized environmental impact of meat production. Now, in EcoMind, she addresses chapter by chapter all the reasons we tell ourselves that we are doomed to continue polluting, destroying, wasting, razing, and killing the planet and its animals. In her view, it’s possible to turn things around–we just have to keep a positive attitude.

This may sound flip and a little Pollyanna-ish, but the book is anything but. Lappé is clear that things are not going well. Each chapter, in the strong tradition of all environmental book, starts with a long list of statistics outlining just how bad things are. But then she veers away from the trodden path, challenging our assumptions and offering new, data-based solutions.

Take, for example, the idea that in order to save our planet, we have to stop GDP growth. I’ll admit it, this is an idea that has taken hold of me in the past few years. But it’s anathema to anyone except borderline extreme environmentalists, and especially to business leaders and policy makers. No growth isn’t the solution, Lappé argues. Because what we’ve had hasn’t even been true growth. It’s actually been destructive and wasteful, because growth as we currently define it includes money spent to clean up pollution (for example), and fails to take into account negative externalities like asthma caused by pollution. Instead, she says, let’s pursue real growth, which would distribute resources fairly and limit destruction. At which point, she heads off into the social and political science of income and power inequality, and how that affects decision making. (No, I never said this was a beach read.)

The whole book is like that: an intelligent synthesis and mesh of all the different sciences–social and traditional–and how they work together to influence environmental policy for good and bad. This is the kind of book that makes you periodically set it down on your lap and stare off into space, just processing and critically thinking about what you just read. In short, it’s a mind-blower.

There are some weaknesses to her plot. This book is still speaking within an echo chamber–it’s a book by an environmentalist for environmentalists. Which is helpful, no doubt, but some of these ideas would do well to make it into the broader consciousness beyond the TED talk class. And there is still a lot of sadness inside this book, even as she strives to offer up a utopian vision for the future. Lappé concedes that it is far too late to slow the freight train of climate change–but hey, maybe we can figure out how to work around it!

Still, if you spend any time at all debating or writing about environmental issues, I highly recommend EcoMind. Perhaps it’s not something your book club would want to take up, but it’s a mind-expanding treatise that (I hope) will influence environmental leaders and individuals such as yourself, as they try to affect change and save the environment–whatever that looks like.

I Did a Juice Cleanse, and OMG It Worked