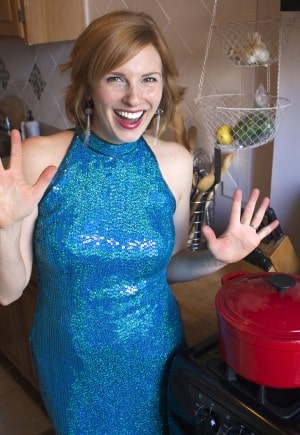 Brittany Barton is the host of The Sparkle Kitchen Show and Wellness Beets Podcast, as well as a wellness chef, photographer, and writer. A sufferer of autoimmune diseases and eating disorders much of her life, she has reset herself for healing and nourishment by committing to eating real food. On her blog, SparkleKitchen.com, she inspires her readers to eat deliciously and become a healthier, more sparkly version of themselves. Connect with Brittany on Instagram, Pinterest, Facebook and Twitter.

Nutrition and health were my beats as a kid. I took to heart everything the media reported and then made it my mission to disseminate that information to family and friends. As soon as my mom brought the groceries home, I’d carefully read every label and discard the items I deemed unfit for consumption.

This had nothing to do with a want or need to lose weight. I was fortunate to have a speedy metabolism and never thought twice about the amount of calories I consumed. My motive was in protecting myself and loved ones from the dangerous ingredients that supposedly caused this or that disease.

My obsession only intensified throughout college and my early 20s. My digestion had been problematic since before I can remember, and I searched for ways to ease the discomfort for years. I was willing to try anything for some relief. So I shifted my eating plans on a regular basis as a way to test my body and improve my health issues.

It was a combined desire of wanting to do the right thing health-wise and to be respected for those choices that led to my dive into vegan food.

Once I began working in the environmental protection field, I became heavily influenced by my surroundings. Many of my colleagues and new friends were vegetarian, vegan, or raw dieters, and my curiosity led me down a similar path. Let’s face it, I wanted to fit in and be accepted.

After a month of binging on food policy documentaries, I could no longer look the other way at how our meat is produced. Beef would never taste the same again. I was willing to sacrifice flavor for the environment and humane treatment of animals, so I gave up meat. When my stomach upset continued, a friend suggested I eliminate dairy, since it’s a common intolerance for people. I went for it.

With dairy eliminated, I was now eating a mostly vegan diet. During this time, my digestion issues lessened and I thought this must be it. My health and values were aligned and I decided this was the life path for me, no turning back.

I was vegetarian and then vegan for three years. Over the course of this new diet, I still ate seafood and eggs occasionally and splurged on bites of meat during holidays with my family. But I always felt guilty for eating it. I thought it was unhealthy and would lead to some awful disease.

These years of restrictive behavior made it difficult for me to relax and just enjoy food. Perfect eating became an obsession, and I judged all others for their food choices.

Despite eating what I considered healthy, my body began showing signs of distress. Severe dry skin patches popped up. I had to go back in for my third colonoscopy before my 24th birthday. I had repeat running injuries that never seemed to heal. With these mounting issues, my dad called me the unhealthiest healthy person.

But I was blind to the fact that my eating habits may be contributing to my problems. I was solidly convinced I was doing what was best for my body.

Five years later my dry skin had reached a tipping point. My friend recommended a few nutrition science books, and by the next week I’d gulped down five books and made appointments with doctors. All results pointed to nutritional deficiencies.

My diet in the last year or so had begun shifting to the regular indulgence of meat a few times per month. Sustainable meat sources were readily available and I proudly told others I eat only “happy” animals. So when I learned I needed to change my eating preferences further in order to improve my health I was perplexed. How could consuming mostly vegetables, fruit, whole grains and little meat be the root of my problems?

I was determined to cure my ailments, so I had no choice but to make the change to a diet that served my body’s nutritional needs. That included eating meat guilt-free for the first time in years. Meat was no longer the enemy. It was a rich source of nutrients my body needed to thrive.

Then I had the realization that saved my life. My diet choices had induced a full-blown eating disorder. I was a food restrictor. And my choice to become vegan was a way to have more control over my body by removing all the animal fat.

Seeing this side of myself wasn’t pretty, and only validated the need to lift all bans on my diet.

I was also officially diagnosed with a dairy allergy, which explained my lifelong digestion discomfort. All of the puzzle pieces were beginning to fit together.

Should You Go Vegan?

When I adopted a plant-based diet, I was unaware of the possible health implications. My surroundings influenced my decision. Eating more plants seemed like a logical way to improve my health, only the opposite happened. It led to restrictive eating patterns and nutritional deficiencies.

That was a major mind shift that I’m still trying to wrap my head around. With the environmental world bashing meat production, it’s difficult to go against a movement aligned with my values. I’m still committed to my environmentalist values. Most of my food is purchased from small sustainable farmers and the “happy” meat philosophy still rings true to me. I just have to remember that the motive for this comes from a place of ethics rather than restriction.

Vegetarian and vegan didn’t work for me, but it does work for so many people. If I had been less naive about nutritional needs and worked with a dietician, my story would be different. It’s smart to have a medical professional involved when making the choice to omit meat. Meat is some of the most nutrient dense food on the planet, containing essential vitamins that plants cannot provide. You must be up on your body’s inner workings before you toss meat to the curb.

Food is a personal subject. We all have strong opinions of what we eat and how we eat it. It’s easy to become wrapped up in the lifestyle and leave behind the fact that food is a necessity for living. Green smoothies are as much of a fashion accessory as your new floral clutch. The media throws conflicting studies at us daily so it’s difficult to find the truth.