“I can’t wait until we figure out how to generate rapid growth clones of cod so I can eat fish and chips without terrible guilt over contributing to the collapse of fisheries,” my friend texted me–apropos of nothing–last weekend.

And that’s the dilemma. Faced with a smorgasbord of West Coast oysters, seared and overfished tuna, and other delicious fair at any of the hundreds of seafood and raw bar restaurants across the city, you must make a decision. Do you:

A. Feign ignorance and order whatever looks good, or

B. Pull out your Monterey Bay Seafood Watch app and be disappointed by all the lovely items on the menu you’re not allowed to order.

Now there’s a third option: Head to The Bounty instead, where the hardest choice will be whether to order a second (or third) cocktail.

Helmed by Kevin Ang, Lance Hess, and Adam Collison, this new restaurant just opened last summer. But don’t be fooled by the seafood–it’s a cozy place to go in the winter, too.

Collison, whose family in Baltimore has a demolition and salvage company, was in charge of the decor. He he had a challenge. When they got the place, it was a hair salon, serving as a front for a what they think was a brothel in the back. (How else to explain the mattresses?) But now there’s no evidence of its shady past. Instead, it looks like it’s been a fisherman’s bar for the better part of a half century.

There are old distillery barrels topped with wood for tables, a sail hung across the ceiling, and a worn, dark wood bar cobbled together from antique cabinets. The beer tap is an old tank with spigots inserted. A large canvas sourced from Build It Green is stretched across one wall, on which Collison painted large swaths of blue, evoking an abstract seascape.

For more sustainability cred, All the lights are LED, the kitchen equipment was bought used, and the kitchen and bar floor is made of recycled rubber. Aaron Wood, one of the bartenders from The Drink, another bar by Collison, did the stained glass transom over the entrance, depicting a ship on high seas, and a muted rainbow separating the bar from the back kitchen. Above the kitchen a swatch of recycled hotel tiles shimmer in blues and whites. Add in the candles and seasonal cocktails, and it’s just the place to go for a mid-winter meal or drink.

The seasonal menu at The Bounty, by Chef Eric Mann of Prune and Craft, changes sometimes daily, depending on what fish is available.

“We only use northeastern, fresh-caught fish, nothing farmed,” Ang told me. “There are some fish that aren’t endangered, but we try avoid them when they are in their mating season. Even all our oysters are local, we don’t do West Coast oysters.” Right now you’ll find vegetarian and carnivorous items like celery root soup; chicken liver mousse with crispy duck cracklings salad; kale salad; a cheese plate with a selection of five American farmstead cheeses from Saxelby Cheese, served with house-made crackers and preserves; grilled albacore tuna; squid ink pasta; gilled cauliflower steak; seared Long Island duck breast, and more. Meats come from Pino’s, what Collison calls, “the last great European-style butcher in New York.”

Good seafood was the impetus behind the restaurant. Collison says, “I lived three blocks away, and I wanted to eat clean seafood everyday. And there was no other place doing that.” As other partners came on, the idea for the restaurant morphed from a crab shack (not sustainable and not always in season) to a general seafood restaurant, with top-tier cocktails.

Ang has been a bartender for 15 years at various bars and Tiki Disco (though he doesn’t even look like he’s been legal to drink that long), brings baking expertise from Roberta’s, and personally trains all the bartenders carefully, using Japanese jiggers that are accurate to the micron. This revelation spurs a debate between him and Collison on the chemistry of cocktails: pouring to the miniscus, the viscosity of various liquors and so forth. No, really, their not OCD at all.

“We don’t do any free pouring here,” Ang tells me. “It’s incredibly important, especially with any good cocktail program, it requires consistency. Everyone here has had years and years of experience.” Add in house-made syrups, and you’ve got a cocktail menu that will serve your tastebuds like a butler.

I tried the Autumn Rose, an aperitif with Campari, St. Germain, fresh ginger syrup, lime, a little bit of orange juice and an orange twist–perfect for clearing the palate. Or try The Alpine, which tastes like a refreshing ski run down the mountain. The cocktails are priced at $10, which seems shockingly low for such an exacting New York bar. 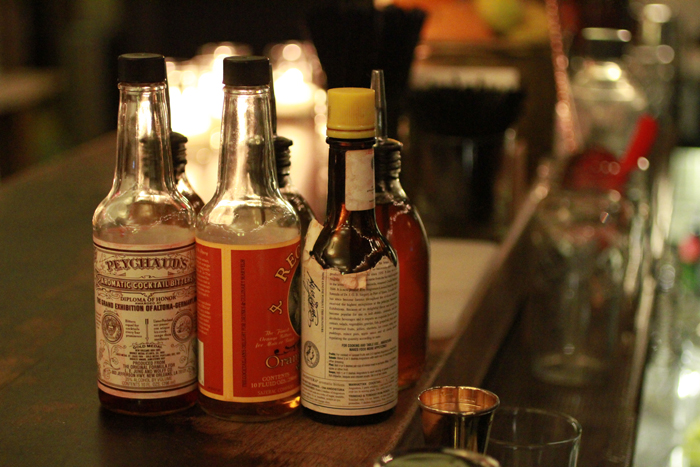 While I’m there, the soundtrack runs through a whole list of indie-ish alternative and rock music. “Young people music,” Kevin calls it. It’s mostly upbeat, but somehow Radio Head’s Talk Show Host sneaks in there at one point.

The Bounty is off the Greenpoint Avenue stop on the G train in Greenpoint, Brooklyn, and is open for dinner Tuesday through Sunday.

Review: This Book Is So Fun to Read, You'll Forget It's About Doomsday