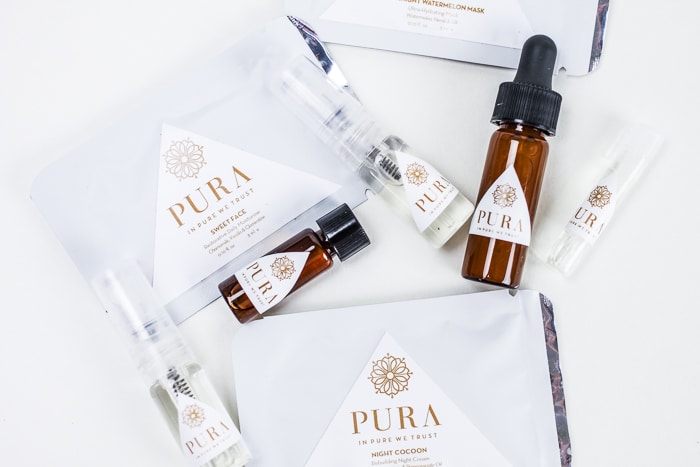 Pura Botanicals is a Canadian company that believes in packing their products, which they adorably refer to as potions, with minimal yet powerful oils and herbs. Sometimes, when you’re reviewing a whole new line, it can get overwhelming trying to get a handle on all the ingredients, but Pura makes it a cinch to understand what they’re putting into their delightful glass bottles. I tried the entire Pura Skincare Sampler Collection for several weeks and here’s what I discovered:

Having just run out of my very favorite Yurrku Tamborine Cleanser, I was pleased to receive a deluxe sample of their luxurious and very Downton Abbey-ish Countess Cleansing Nectar to tide me over until I got around to a reorder. The neroli oil made the Countess Cleansing Nectar smell extra amazing. Though it’s marketed as both a makeup remover and a facial cleanser, the almond oil actually makes this cleansing oil more effective as a makeup remover. You’ll need to double cleanse to get rid of leftover oil and stubborn makeup bits.

Following the cleansing step, I was given two mists to try out:  a hydrating one called Botanical Bloom Essence and, on the other side of the toner spectrum, a Clarifying Mist. The Botanical Bloom Essence mist contains rose water and aloe vera juice and witch hazel — it smells and feels lovely. The price will probably keep me from buying more for myself, but I am sorely tempted by the Clarifying Mist which has tea tree water and rosemary oil. My skin had a rare breakout before the test and this particular toner seemed to calm any inflammation and redness. The third ingredient, lemongrass water, brought the fragrance some balance (so that the toner didn’t smell like food). Does anyone else have that issue with rosemary scented skincare? That it smells hauntingly of roast chicken? Just me? [Editors note from Alden: Haha, me too.]

In the morning, I applied Sweet Face moisturizer which was a true winner. Sweet Face moisturizer earns its name with a naturally sweet, almost marshmallow-like scent because of the vanilla oil. The vanilla isn’t just a fun gimmick: it turns out there are natural antioxidant properties in vanilla. The moisturizer is thick and creamy, yet absorbs into the skin immediately. I looked forward to using it every day and felt a pang of sadness when I ran out of my testing sample.

At night, I applied either the Night Cocoon or the Overnight Watermelon Mask for an extra layer of hydration. I liked both the tumeric and pomegranate oil in Night Cocoon which gives it a satiny texture. Of the two night creams, I was a bigger fan of the Overnight Watermelon Mask where the mixture of neroli, sweet orange and vanilla oils was heavenly. Be warned, though: it contains silk protein, so this particular mask isn’t suitable for vegans.

Finally, there were two oils to apply. The questionably named Lolita Face Drops is a simple and fab combo of essential oils including rose as well as Vitamin C. Vitamin C is even more powerful when paired with other micronutrients such as Vitamin E so you get more bang for your buck if you smooth on Lolita Face Drops is after either Pura night cream, which both contain Vitamin E.

Last but not least: the Neroli Eye Ritual oil. If you’ve never used an eye oil before, it can feel a bit weird. I’ve become a big eye oil advocate because, in my experience, they’re really terrific at hydrating and if you get the right kind of oils in the mix, they plump up the delicate skin around your eye so that fine lines aren’t as apparent. I enjoyed the Neroli Eye Ritual, though it left my skin oilier than I could handle in the mornings. Pura actually recommends this for nightly use, that way your concealer doesn’t slide around all over your face.

As a whole, Pura is well-thought-out and intelligently designed so that their skincare creations work well alone, but work even better together. They’re an excellent and trustworthy source of high-quality skincare products, or, if you like, “potions”.

Why a Traditional CSA Is no Longer Enough