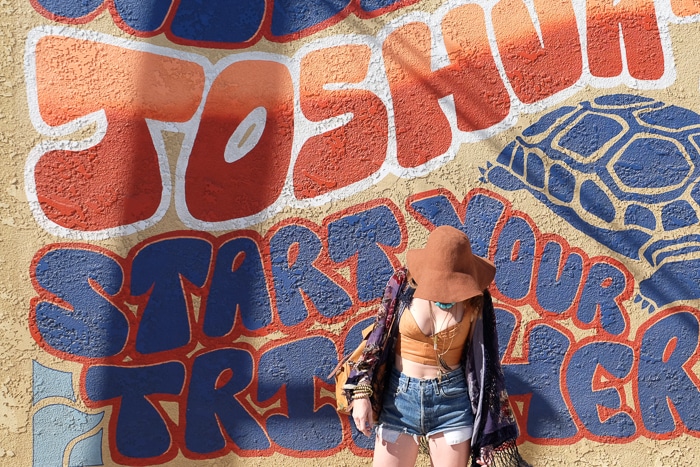 I had just finished interviewing Hall Newbegin of the sustainable wilderness perfumery Juniper Ridge on the phone, when he invited me out to his trade show, Desert and Denim, in Joshua Tree.

Now, I’m not so into trade shows. Usually they’re held in large, fluorescent conference centers, vast warehouses filled with booth of unsustainable items. Every time I go, I spend 80% of my time asking the vendors if they are sustainable or ethical in anyway, and getting either a blank stare, or a chipper, vague, greenwash of a statement. I don’t have time for two days of that!

But it was clear from the beginning that Desert and Denim was different. Described as a “raucous trade show in the high desert,” it can be thought of more as a gathering of renegade makers, who do a little business during the day at the outdoor show, in between sips of beer and whiskey, then gather at night for live music. I put the call out on Facebook, and found a San Francisco friend to come with me. 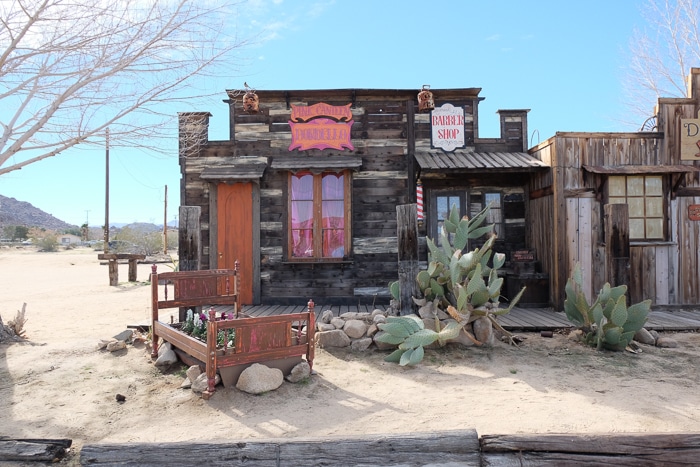 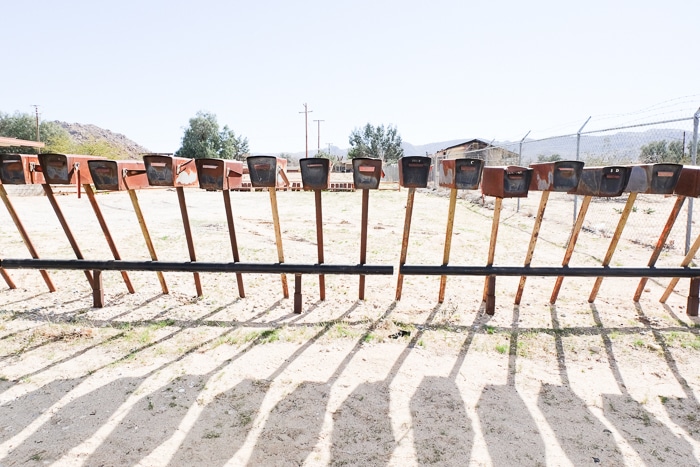 Joshua Tree, where it was held, is a town of 9,000 people situated less than an hour away from Palm Springs and a couple hours away from Los Angeles. It is the gate to Joshua Tree National Park, a protected Mojave Desert area complete with rock climbing, hiking, camping, and breathtaking vistas.

The downtown area, which is sparse to the point of being quaint,  has the look of a Western movie set, with art galleries, a yoga studio, two outdoor gear stores, quirky gift shops, and plenty of vegan options. Saturday morning there’s a Farmers Market, and there’s a natural grocery store. It’s often the site of retreats and music festivals, but most of the time it’s the home of artists, musicians, ornery westerners swaggering around with mustaches and boots, and retirees. It feels like it still lies on the frontier: wild, untamed, vast, mysterious, bohemian, slightly outside of the law, even. Like Burning Man but with at attitude, suede fringe, and motorcycles. 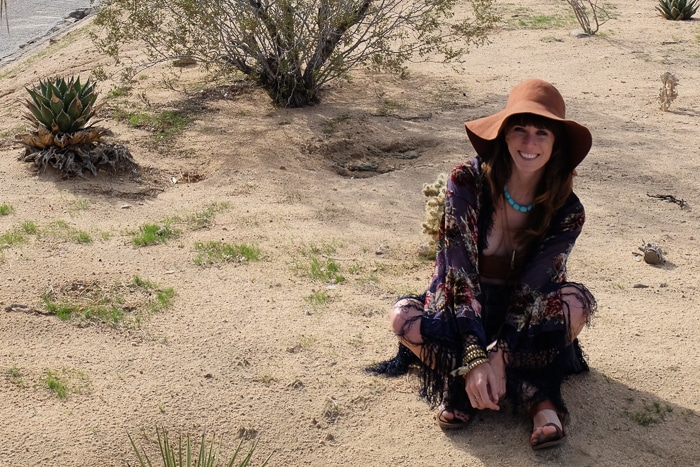 For breakfast, we had smoothies and a vegan bagel with an LA couple at the Natural Sisters Café, before heading to the trade show. We had the pleasure of running into Kelsi Smith of the marketing company Stylesmith and her girls, and they invited us out to the High Desert Test Sites, a collection of art scattered in the desert. We only had time for one, which is a shame, because there are several others to see. 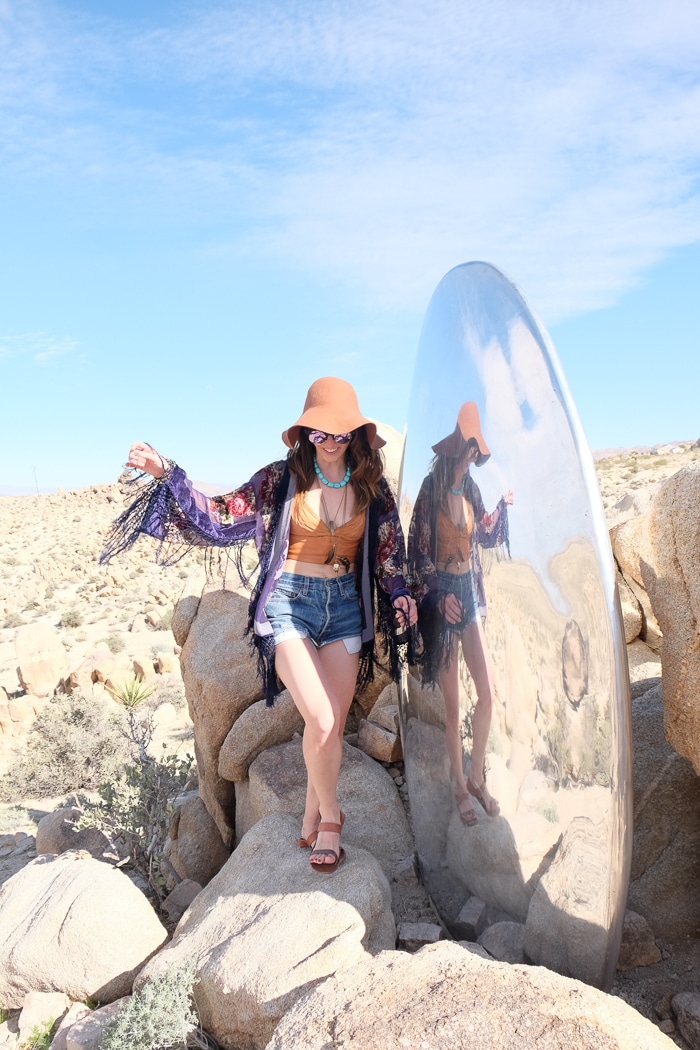 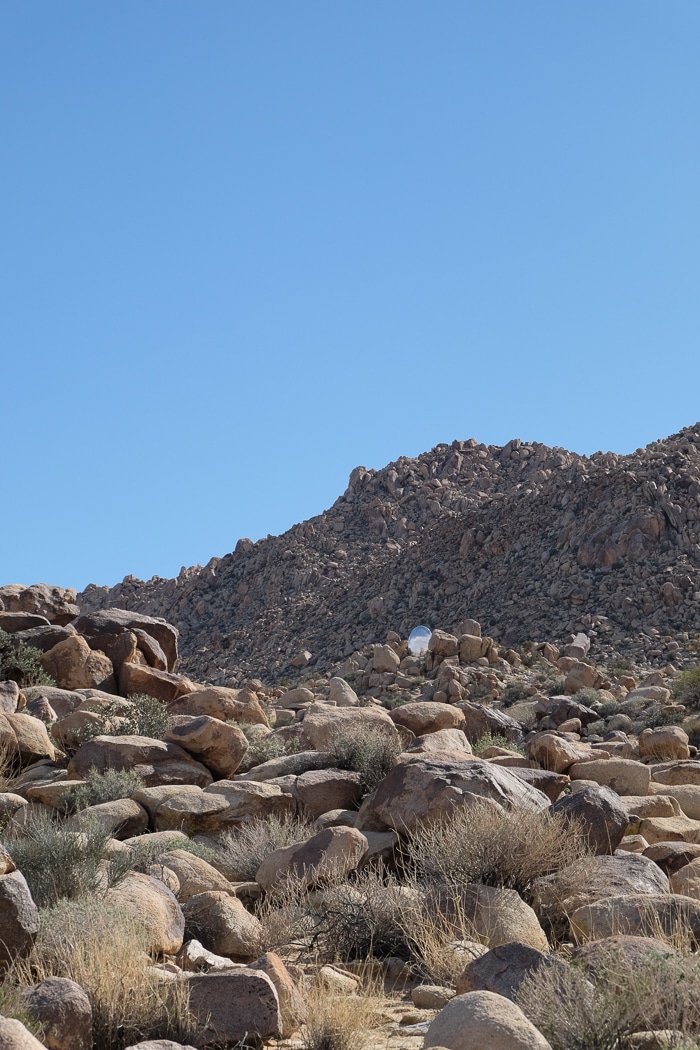 At the Desert and Denim trade show, which was held outdoors in the sunshine at the eco-luxurious, 5-room hotel Mojave Sands, it wasn’t just about perusing wholesale, handmade items. There were also activities to keep us busy, like perfume making with Juniper Ridge, haircuts by Byrd Hairdo Products, tarot card readings in a gypsy caravan, and indigo dying by Brooklyn-based Apprvl, which has blankets, dye kits, denim repair kits, pillows, dyed vintage napkins, and pestemels (sort of like Turkish towels). 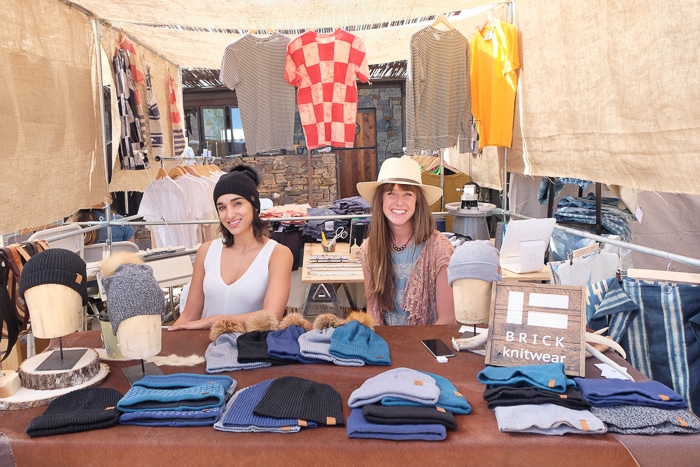 No, this isn’t a trade show for vegans. While everything was handmade, and beauty products were toxin-free, there was a preponderance of crafted leather products at every other booth.

The show was overrun with photographers and the stylish LA set. It may have been New York Fashion Week back in NYC, but the action was all here.

We listened to records from Gnome Life, a label that sells gorgeously-designed records and cassette tapes, featuring folk and indie music with mystical origins. My friend and I both bought an Ever Present Calm record.

We picked up dark chocolate, single origin bars, and superfood nut butter from Endorfin foods. Their chocolate has coconut sugar and coconut milk instead of the conventional stuff, sources unroasted, organic cacao beans in order to preserve their health benefits, and adds subtle flavor with organic essential oils. I’m seriously considering picking up a CSA subscription! 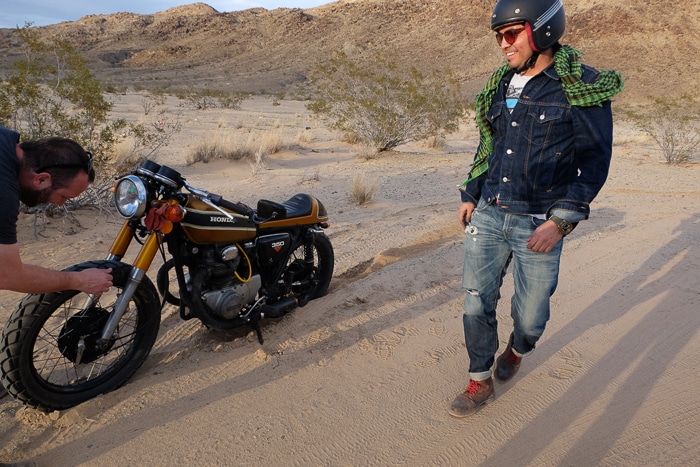 At the end of the first day, everyone piled into their cars, and a caravan headed out to the desert to where Totally Blown puts the finishing touches on their clothing. They sell American-mde overalls, kimonos, and tops made of cotton, rayon and linen, and dyed with natural vegetable dyes. Then, they take the items out to the desert and shoot them full of buckshot to give them a unique smattering of holes.

As the sun set, co-founder Cody demonstrated how to use a shotgun, then guided each of us through shooting up a piece of clothing. I chose to shoot holes in the long-sleeved tee I had indigo dyed earlier that day. 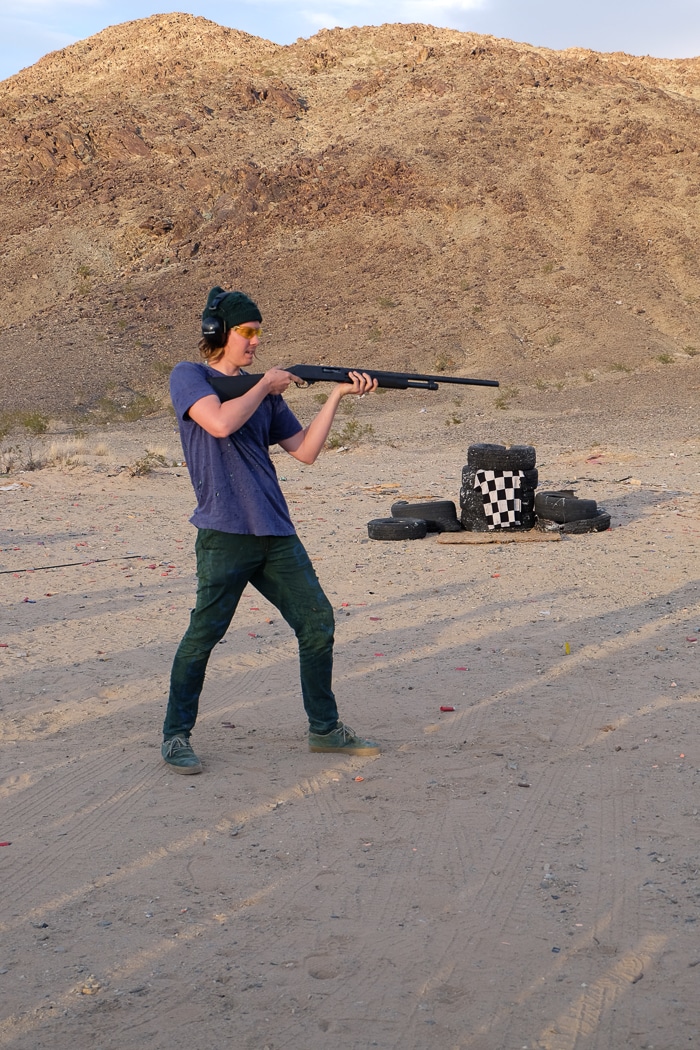 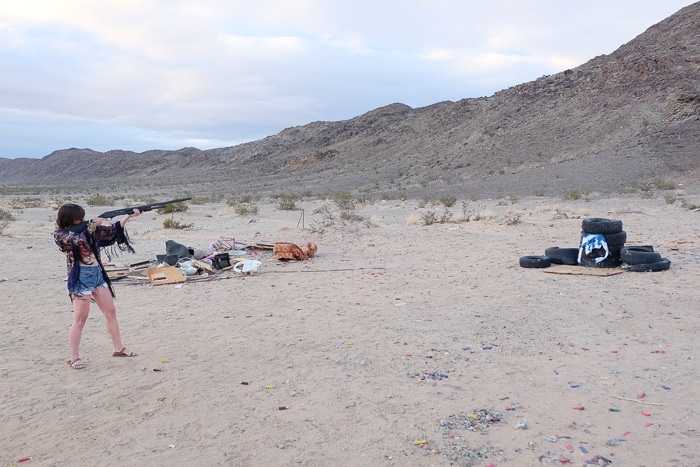 That night we headed to the art gallery Taylor Junction, where we looked at local art, and listened to live music in the backyard, sipping pinot from a can by Union Wine Co., an Oregon-based winery.

For breakfast the next morning, we rolled into Crossroads Café, which was running only a 15 minute wait. (It was a half hour the night before for dinner.) The menu features typical southwestern options like corn bread, hot cakes, and huevos rancheros, with optional vegan cheese.

That day I quickly hit the rest of the booths, stopping to get all-natural leathercare for my fiancé’s vintaeg leather jacket from Otter Wax, which now also makes Charasu hair care, free of sulfates and parabens. 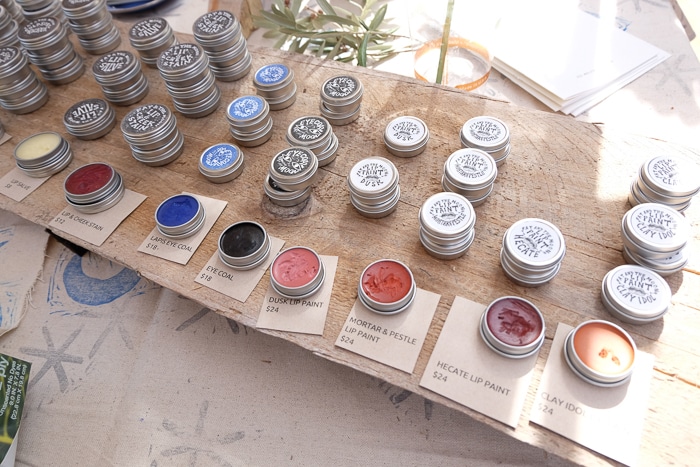 I made sure to stop by Fat and the Moon to try some of their natural lip colors. I was disappointed not to meet the founder, who had taken a break.

DOOMEDnyc had a sleek collection of artisan leather goods, including an impressive roll-up makeup kit that you could strap to your bike or motorcycle.

After sampling some Colorado whiskey by Stranahan’s, we took off for the national park, where we watched the sun go down from the top of a huge pile of boulders. 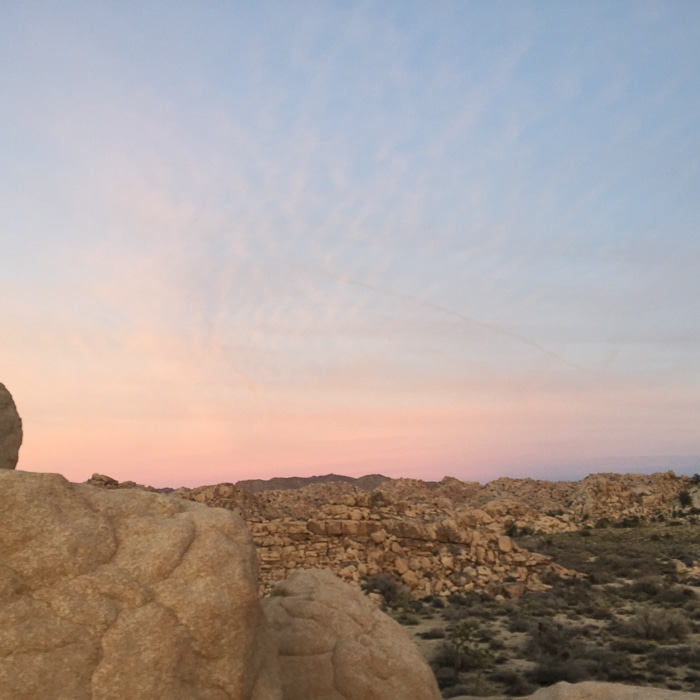 We stayed in an off-the-grid shack, which we heated with a wood-burning stove. That night we relaxed with locals and other Desert & Denim attendees at the famous Pappy & Harriet’s, at a former Western Hollywood set built in the 40s. We retired to Hicksville Trailer Park, a quirky motel complete with a fire pit inside a teepee, a pool, a hot tub, arcade games, music, and a recording studio. 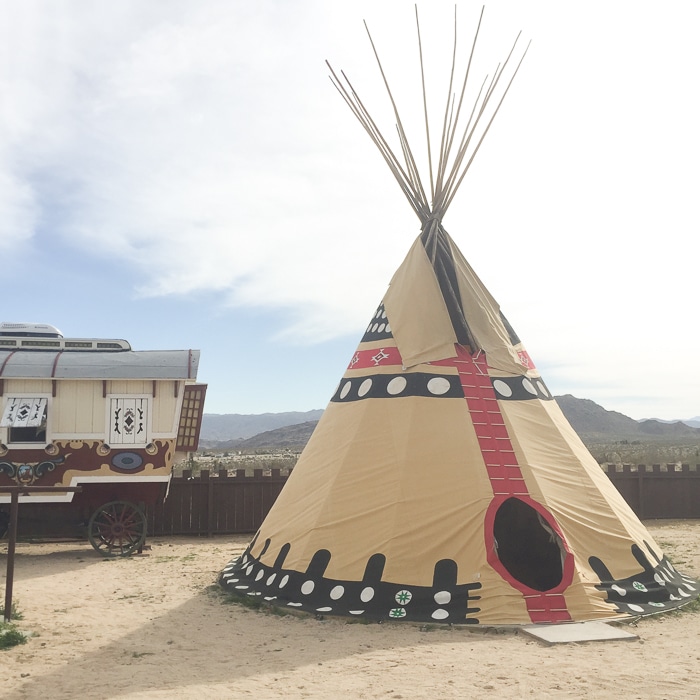 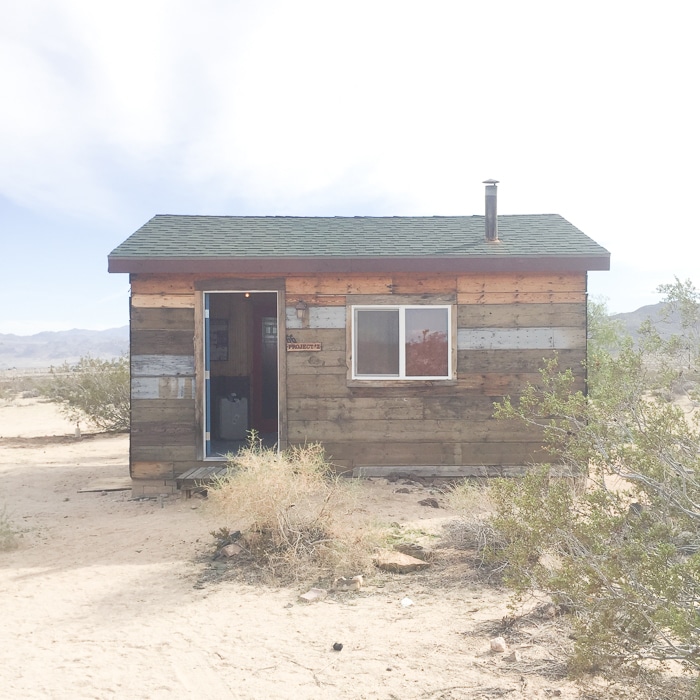 In the end, it became clear you need more than two days to experience Joshua Tree. Here are the things we were unable to do (requiring another visit!):