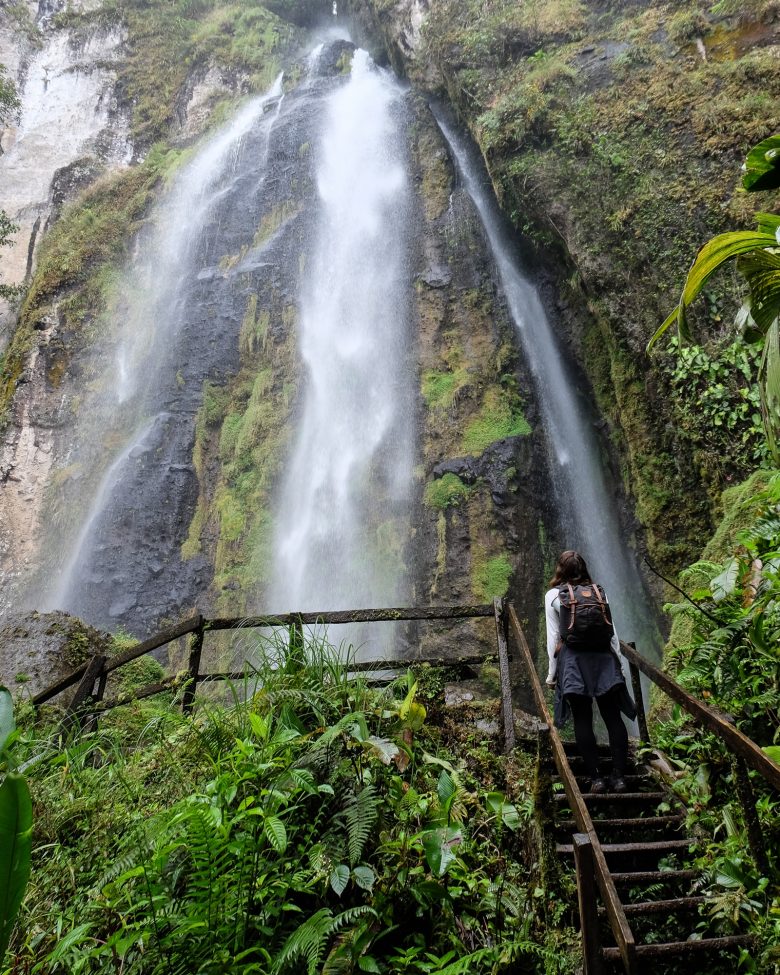 Last week, we went on a refreshing 3-hour hike to a waterfall led by a local 79-year-old Nicaraguan man named Chico. Chico fairly skipped up the mountain and always had a smile on his face. Our other guide, Freddy, from Matagalpa Tours, explained that all the local men in that mountain community age really well. But the women, well…after having 10 children, and spending their whole lives in the kitchen, they suffer physically.

When we finished our hike, we went to Chico’s home to have lunch. We sat down in the kitchen, and his daughter and wife shuffled from the wood burning stove to the old sink full of dishes, looking bone tired. They were cooking the corn, to then grind it, and make it into tortillas. They do this every day. They were cleaning the dishes, shooing the dogs out the door, and dealing with questions from their kids. They also needed to hang up handwashed clothing on the line outside (it rained off and on that whole week, so it would get wet again), sweep the floor, and take care of the farm animals out back.

You see, the men go work in the farm or go hunting, but they’re finished by early afternoon and spend the rest of the day hanging out, drinking, or going on a hike. The women, they work from early morning until late at night, cooking, cleaning, and raising the kids. These two women had never hiked the mountain trail that is 10 minutes from their front door. They’ve never seen that waterfall that their husband/father is so familiar with.

I do not envy those women at all. This is all to say: I do not agree with this article that has been going around about “the tyranny of convenience“, which makes no distinction between conveniences that release us from menial labor and give us choices, and empty conveniences that tempt us away from living our lives well. Too often we romanticize DIYing all our own stuff, but we don’t realize what a completely DIY, package-free, homecooked, line-dry life actually looks like. It can look like drudgery.

Thank you washing machines and computers, gas ovens, vacuum cleaners, refrigerators, cars, hot water heaters and all the other things that allow me to live my life, work, and travel.

The newest and best report out on fashion’s impact on the environment. It puts fashion’s emissions at 8 percent of the global total. (Which is still not the second most polluting industry.) | Climate Works

Oh no, not another new ethical fashion brand. (She really nailed this one.) | Eco Warrior Princess

Levi’s is eliminating chemicals in its supply chain, woohoo! But it sounds like they also eliminated some jobs in doing so. | EcoCult Inbox

I love Meredith as an editor (I’ve written for her before) and I love her even more after reading this thoughtful essay on American manufacturing. | Racked

Has there been prison labor in C&A and H&M’s supply chain? | Quartz

Is “ethical” and “sustainable” fashion made with deadstock just greenwashing? | Eluxe Magazine

How Patagonia grows every time it fights for what is right. | Fast Company

Americans have stopped trying to stuff so much clothing in their closets. | Quartz

Supplements are a racket. Especially if you’re under 40 and don’t have a chronic condition. | Ars Technica

Dang, this eco-friendly hostel was 15 minutes away from where we were in Playa Maderas, Nicaragua last week, and I had no idea!

The 11 cities most likely to run out of water..after Cape Town. | BBC

Microplastics have reached the remotest parts of Alaska. | Pacific Standard

I stumbled across this research on Blue Zones, and I feel like it’s the final word on the healthiest diet. | NPR

The U.S. has shockingly dirty meat. | The Guardian

While we’re being honest about the zero waste life, let’s talk about plastic containers. | Litterless

To get consumers to act more green, evoke pride instead of guilt. | Pacific Standard

We need to ban all single-use plastics, not just this bag and that straw. | LA Times

You can blame smog on nail polish now, not just cars. | Forbes

How to be an activist from an O.G. climate activist lady. | Man Repeller

There is a lot of lying going on, even in the green community! Here’s how to do a 30-second article fact check. | Hapgood

Ethical Writers & Creatives member Jazzmine Raine has an inspiring new project: the Hara House, a zero waste guesthouse and social enterprise is located in Bikaner, Rajasthan, India. Twenty percent of all tour and room booking profits are put aside in their Hara Innovation Fund to invest in social entrepreneurial projects in North India focused on environmental action and education, like Doodlage and EduCare India. Contribute to their IndieGoGo campaign and get a perk of staying there next year!

The size-inclusive, ethical boutique Chic Cartel is having a Kickstarter campaign for a super-hot velvet bikini, meow!

Designed With Intent, a platform for sustainability through design, is hosting a TweetChat next week featuring guest Cora Hilts, founder of Rêve En Vert, the premier online retailer of sustainable luxury. They will will be discussing ways to curate a #ConsciousCloset. Please join the conversation next Thursday 8 March from 8-9pm BST.

Eileen Fisher is looking for young women age 16 to 20 for a weeklong residency in design and sustainability. | EcoCult Inbox

Save PBS and NPR From Trump’s Budget Cuts!

Coca Cola: Commit to Keeping your Plastic out of our Oceans

The 7 Best Eco-Friendly Hotels and Resorts in Nicaragua