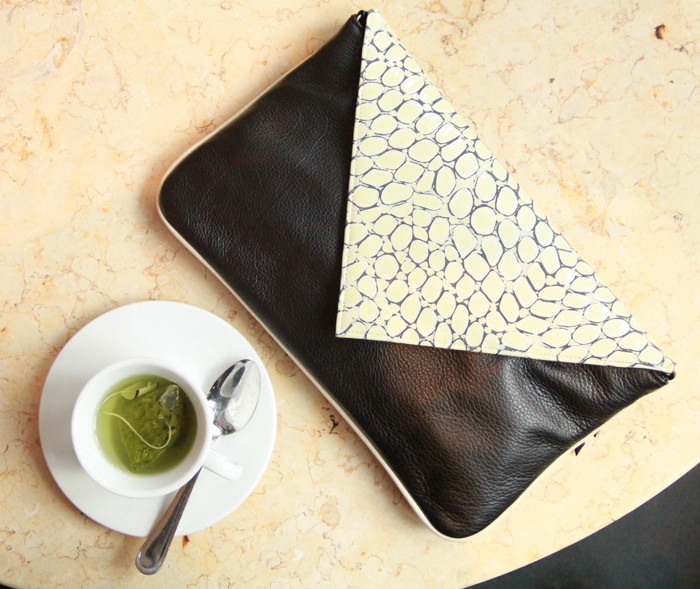 Jess Rizzuti’s purses are not what they seem.

Seen tucked under your friend’s arm at a cocktail party, you would think the Sophie Hard Baguette, in sumptuous, pattered, bone-white and black trim, is made of crocodile. As a well-dressed woman strode past you on the street, you would take the Olivia swinging from her shoulder, in ivory and gray graphical design, as python.

Save your outrage, because it’s actually a trick of modern and inventive design. Rizzuti, who was a textile designer in a former life, isn’t content to turn out yet another plain black bag. Instead, she uses cow and lamb leather–byproducts of meat production–and shapes it into what looks like exotic and luxurious materials for her collection of purses, totes and clutches. She also frequently uses eco-friendly cork, pressing it into snakeskin and crocodile. 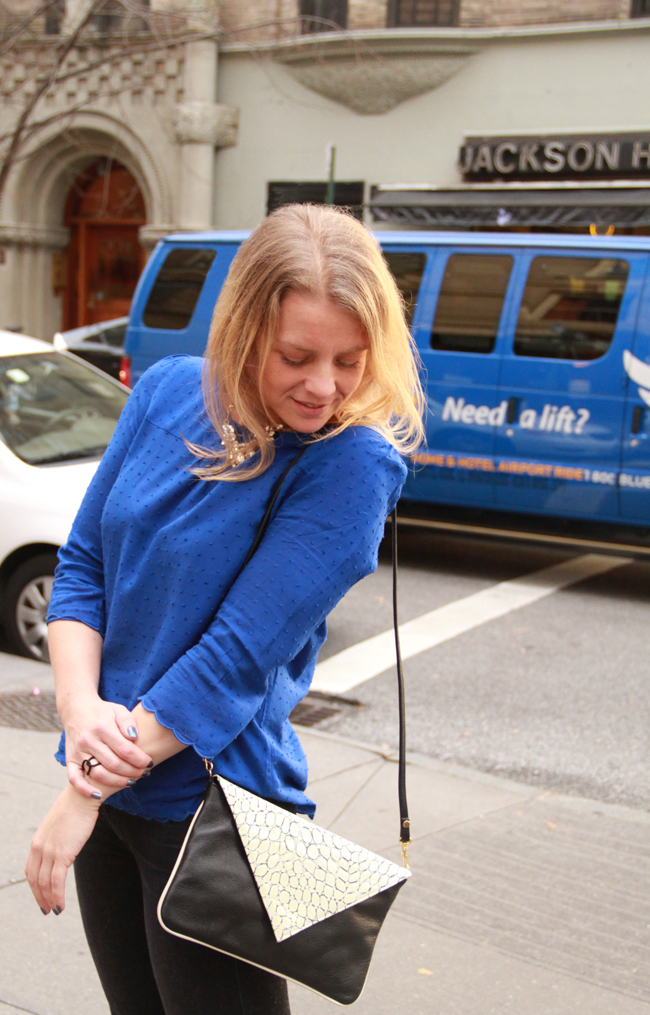 “I use a lot of materials that appear to be exotic skins, but aren’t,” she says, as she shows me her samples at an Upper West Side café. She pulls out purses with linen, cotton batik and raw silk linings. One purse she’s experimenting with is almost entirely free of hardware (a solution to the problem of sourcing ethical metal hardware). The strap slips through loops under the flap for an optional shoulder purse.

And Rizzuti is almost always experimenting: with materials, with looks and with sourcing. Her purses are made with water-based dyes and glues. She produces in New York and New Jersey, and gets much of her custom material done on Long Island. Leathers come from Italy or elsewhere. “Now I’m trying to find out more and more where the leather is originating from,” she says. “I’m buying it here in New York, but I want to get the back story on where I’m getting things.” 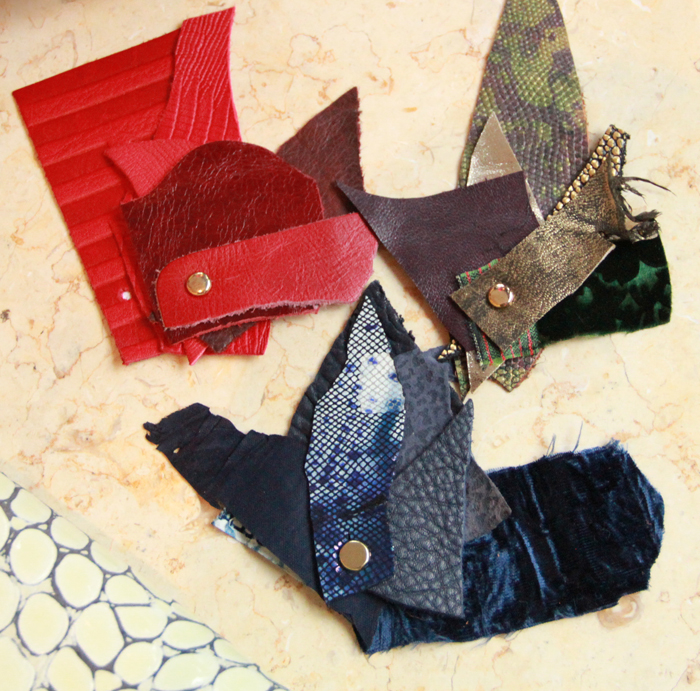 As for how she came to be a sustainable designer, “It just kind of happened naturally. My mom just raised me to be a good person, and just to think about how I’m doing something, and apply that to fashion. So many things in fashion are really terrible for the environment, so it’s just about trying to do my best.”

She recognizes that there are trade-offs to taking the sustainable route. “It definitely takes more time and more thought, more planning. The fact that I am probably not making as much money as I could be, because I’m spending more money on materials and producing locally, that’s my choice. I’m not creating a zero carbon footprint. There are certain things that I don’t even know. So it’s a learning experience for me, too.” 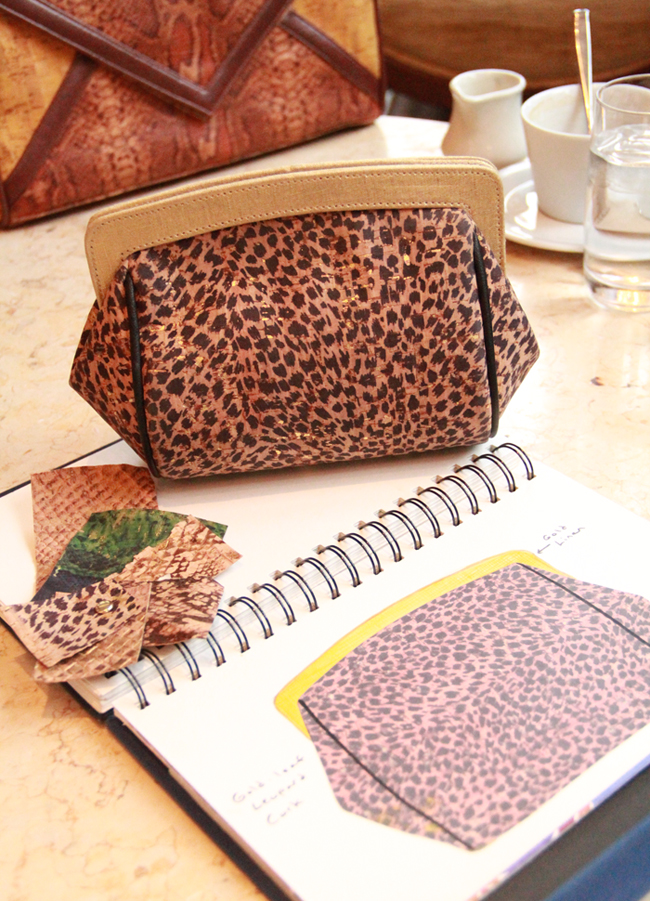 Her first collection debuted in 2009 and she’s since been nominated three times for InStyle’s Independent Handbag Designer Awards, for “Best Green Handbag,” and has been featured in People Magazine and InStyle.com. “When I started I was a little all over the place, now I’ve learned to have a more critical eye, and edit myself,” she says. “It’s becoming a little more cohesive, with more longevity.” She designs for the 30-something professional woman, who’s looking for a long-lasting piece that is “fresh, and different.”

She develops each design in her studio in Riverdale, a quiet neighborhood above the Bronx, right next to the Wave Hill house. She seems to thrive on creativity and aesthetics–when she’s not designing, she’s a florist, event planner and mural painter.

One thing you’ll know for sure: “I plan to always produce in the United States, no matter how big I get.”

In New York, you can see and touch her designs at Pamela Gonzales on SoHo, or shop online at Jessrizzuti.com. 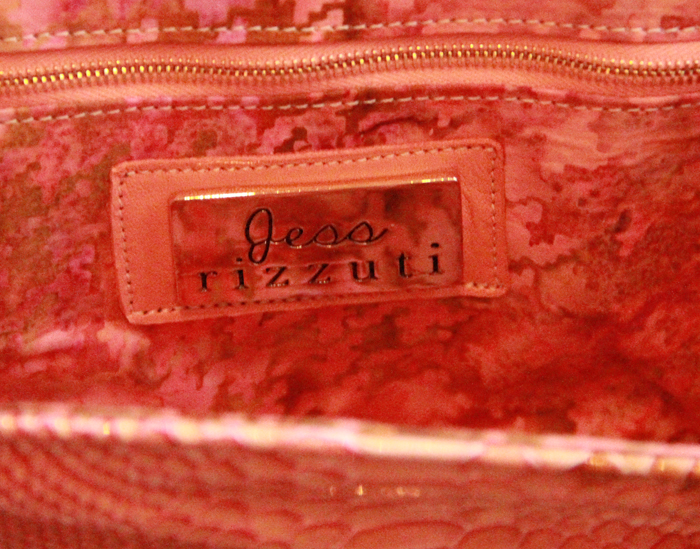 Giveaway Alert! 4 Lush Books and Documentaries About Surfing and Climbing During the 50s and 60s