You  would be forgiven for being puzzled about the fact that up until yesterday, Brooklyn did not have a Whole Foods. Surely, there’s one by the Urban Outfitters when you get off the Brooklyn Bridge? You know, where Equinox, Crunch, Planet Fitness, and Gold’s all have outposts within a few blocks of each other for health-loving yuppies? Nope.

It took about eight years, with many stops and starts, but the Whole Foods has officially opened its doors, and chose to do so right next to the Gowanus Canal. Not surprisingly, the store has decided to call itself Third & 3rd (with accompanying fancy typefaces), not Whole Foods Gowanus, which brings up connotations of everything decidedly not organic.

Whole Foods first had to clean the site of toxins, then erected a huge, 56,000-square-foot space worthy of the suburbs, housed all on one floor, instead of the vast basement you see at other Whole Foods in NYC. It even has a parking lot bedecked with solar panels and futuristic windmills, two electric car charging stations, plus bike parking and bike repair. (Necessary, because in this neck of the woods, it’s no as walkable as you would think.)

The first 250 in the doors were promised a canvas tote back (Really? No year supply of sandwiches, a la Chik-fil-A?) and by the time I arrived at 8:30 in the morning, there was a mob waiting at the doors. I swung around to the other entrance reserved for press, and found inside … a grocery store. But a really nice one!

Within minutes of the breaking bread ceremony ending, the store was just as crowded as Union Square at 6 p.m. on a weekday. I took a stroll, and discovered some interesting treats: a coffee bar serving Italian-style coffee, a butcher shops displaying entire pigs and cow ribs hanging from meat hooks, a juice bar where every single smoothie has kale, a knife-sharpening station, the normal (for Whole Foods) pizza, sandwich and bakery counters, YUJI Ramen, plus a whole aisle of refrigerated craft beer. And oh yeah, the vinyl record section. (Which is tiny–really just an aisle ender–but has gotten the most press from hipster haters.) It even includes accessories from Wrecords by Monkey. Before I checked out with my fairly standard frozen berries, almond butter and mixed greens (OK, and a sweet potato flavored yogurt by Blue Hill–let’s live a little), I was passed by a 20-something clutching a freshly-pressed Lana del Ray record wrapped in plastic.

Not to be confused with any faceless corporate entity, Whole Foods has taken pains to ingratiate itself with Brooklynites, featuring tons of locally-sourced artisanal items from names you recognize, like Liddabit Sweets, Van Leeuwen Artisan Ice Cream and frozen pizza from Roberta’s. I spied a special, commemorative collaboration between a local chocolate and local beer company, which I puzzled over before moving on.

They will also use proceeds from the sale of specially-designed reusable bags to plant fig trees throughout the borough, and will feature 5% days, where 5% of of the store’s sales are donated to a non-profit. The first, on January 11th, will go to Brooklyn Botanic Garden.

I hadn’t had breakfast, hoping a few free samples would be tossed my way. But I only got a sample of extremely funky cheese and a piece of bread, so I bought a slice of wood-fired breakfast pizza topped with a fried egg, and took it upstairs to The Roof. On the way up, I noticed the wooden stairs had some character–they’re repurposed from the Coney Island board walk. The old bricks you see around the store are from a decommissioned building in Newark.

It was pretty quiet up there, and the outdoor area was covered in snow. But when it gets into full swing, you’ll be able to order beer on tap or wine to enjoy with your locally-sourced meal–Sweet Action Ribs, Buffalo Seitan, Winter Grilled Cheese, cheeseboards and local charcuterie boards are on the menu–while you gaze out over Brooklyn’s most famous Superfund site. Next door, the 20,000 square foot rooftop greenhouse isn’t quite finished yet, but promises to provide year-round, fresh produce on a huge scale. There’s a grey/storm water reuse system for irrigation.

One wrinkle they haven’t quite ironed out is what’s going to happen to the historic Coignet building, a gorgeous ruin that is hugged on two sides by the new gigantic store. It’s for sale, and Whole Foods has promised to do some repairs to it.

Whole Foods Third & 3rd is expected to be about 60% more energy efficient than an average U.S. grocery retail outlet. A state-of-the-art C02 refrigeration system operated in tandem with a combined heat and power plant provides the store with on-site electric generation, and captures exhaust heat to operate an absorption chiller machine, which cools the store. And that means no synthetic refrigerants like HFC and CFC. In the parking lot, permeable pavers and adaptive landscaping reduce runoff. 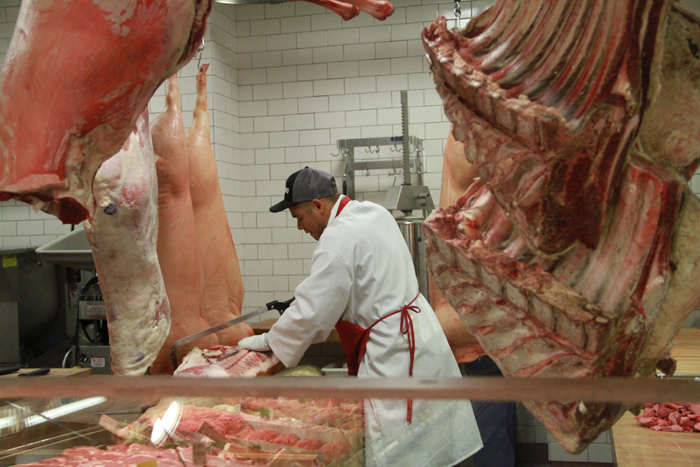 The infamous checkout triage has been jettisoned in favor of traditional checkout lines, though with the special touch of carved, wooden dividers to separate your haul from the locavore in front of you.

The employees were still settling in a bit, including the adorable Caribbean gentleman taking my order at the juice bar, who took about five minutes to do so. The fish counter was yelling out sale prices the entire time, which made me wonder if they would keep it up all week, or even all day. Ouchies for their vocal chords. But overall, the store was running at full steam, and will probably become the store of choice for many Gowanus and Carroll Garden residents. (Watch for real estate prices to rise.) Plus, Brooklynites with a car. If you want to check it out, it’s off the J and R trains.