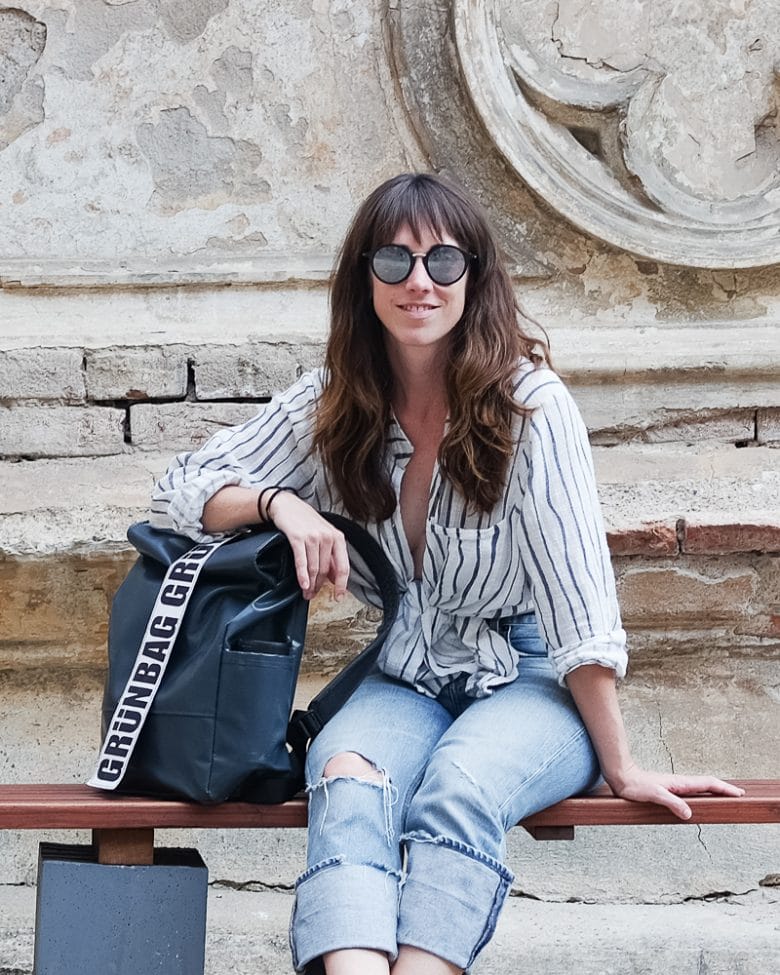 This post is generously sponsored by grünBAG. As always, I only parter with companies I think are doing good work for the world, and what follows is my honest experience and opinion. Support EcoCult editorial by supporting them!

I had seen grünbag, the sustainable Danish bag company, and liked its sleek Scandinavian style. But when I found out that they manufacture many of their bags right in their office, and can do custom bags, that is when I sat up and got excited.

You see, when you’re traveling for a year like I am, you can only have one of everything, and each thing needs to be perfectly useful and versatile. You do the best you can to buy the best version when you are packing, but invariably, you find shortcomings in what you own and switch it out for something better. I’m not alone in this. The woman traveling 52 places in 52 weeks for The New York Times went through two backpacks before settling on her favorite.

I started my year out with a Fjallraven rucksack because they’re trendy and I was seduced by the vague promises of utility, forever quality, and sustainability. And yes, it served me passably well, with two side pockets and two flat interior pockets for sliding my laptop and magazines inside, and a mini pocket inside for tiny things. But what really bothered me was the back exterior pocket. It doesn’t have a zipper – it’s just open to the world. (Waves a friendly wave at pickpocketers.) And when the backpack is full, it’s hard to shove your hand inside that pocket and rummage around for what you want. Oh, and the Fjallraven rucksack is not waterproof at all. I didn’t want to buy a raincover, because that’s another thing to drag around.

So anyway, I was having a conversation in Copenhagen with Florine Hofmann, a fellow eco blogger and the Marketing and Communications Manager for grünBAG, and she mentioned that they make many of their bags right in the office in Aarhus, Denmark. And also, they can do custom backpacks.

“Wait, so could you do a custom backpack for me?” I asked. Because I wanted to combine what I liked about my current backpack with what I liked about the grünBAG backpacks: they’re sustainable, they have a sleek Scandinavian design, and they’re waterproof.

The answer was yes. And, why not pay a visit to charming Aarhus while I was at it and see my backpack get made right in their offices? Well, that is an invitation a traveling sustainable fashion writer like me just can’t resist. 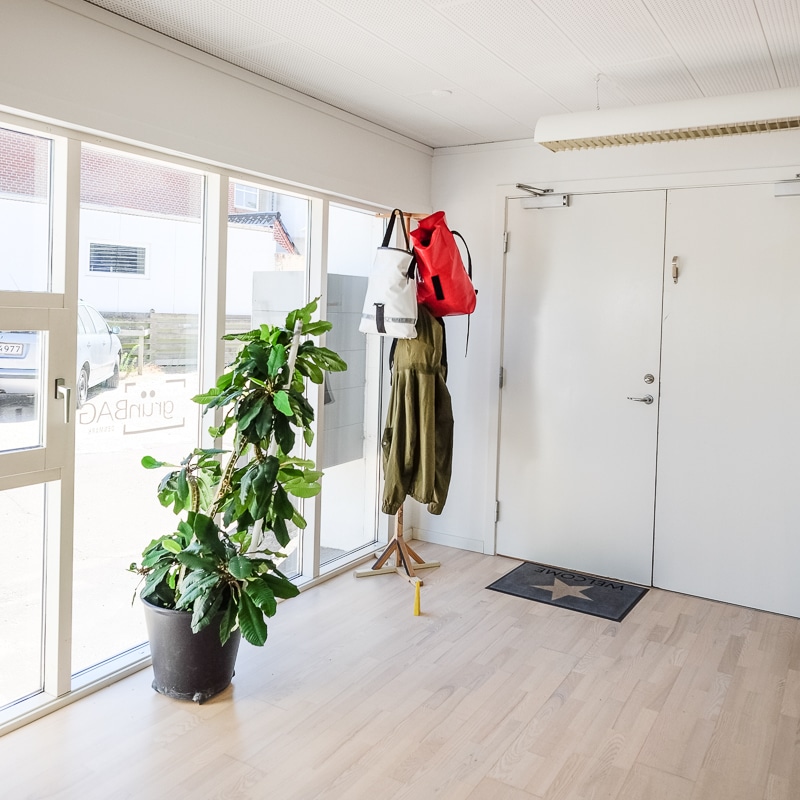 Welcome to Denmark, Home of the Sustainably Humble

Aarhus is the second largest city in Denmark after Copenhagen, but everyone’s extended vacation was just about to start when I arrived by train from Berlin at the beginning of July, so the whole city had a sleepy Scandinavian way about it. The sun shone down even as the wind whipped off the harbor, with its brand new, monumental, black-and-white, angular architecture, and into the historical center of gingerbread brick houses. I spent my morning trying to find a coffee shop that hadn’t closed for vacation and offered wifi, until Florine and her boss, grünBAG CFO Jens Peter Anderson, came and fetched me to bring me to the grünBAG office.

Peter is married to the grunBAG founder and CEO, Helen Leegard Anderson. They are a typically Danish couple in a few ways. One is that they are extremely humble, and got visibly uncomfortable when I tried to ask them questions about themselves. The other thing I’ve noticed about Denmark is that it’s a wealthy, sustainable country, but Danes always seem quite vague about money. I once asked a Dane what Denmark’s main industry is, and he hemmed and hawed and named a few giant companies like Norvo Nordisk (the most ethical pharmaceutical corporation out there), Lego (switching to plant plastics for their bricks), and the shipping company Maersk, before shrugging and saying he didn’t really know.

It was the same with Jens Peter. (Helen focused on her sewing while this short interview happened, as if she weren’t the founder and CEO.) He’s involved in wind farms and solar panel manufacturing as well as his role at grünBAG, which he helped Helen re-start three years ago after a a hiatus of a few years. “We had to adjust small things all around,” Jens said. “Maybe we were too early with the recycling things. The awareness in the Western world is better now.”

And that is the whole story. I tried. They really would rather me focus on grünBAG, so that is what I’ll do.

The ground-floor grünBAG office isn’t large, but it is pleasant, filled with light from the large windows spanning one wall and with perfectly organized shelves of materials and finished bags. There are two industrial sewing machines where Helen and what they call the Redesigners, Christina Puggaard and Anne Munkholm Molbech, stitch the bags together. (A sixth employee,Sille Skrydstrup Aaes, used to be a redesigner but now is grünBAG’s Ecommerce Executive.) Plus a cutting table, a standing desk for meetings, and a dining table where they have lunch, and where they had tea waiting for me. 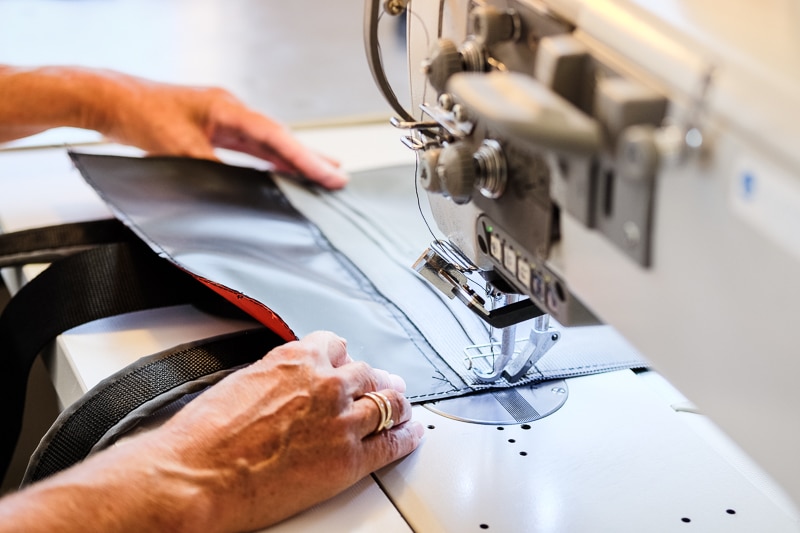 Most of the bags are made right in the office by Helen and the two redesigners. For large orders of over 200, they work with a Danish-owned factory in Poland which is only a half day of ground travel away.  The grünBAG team has visited the factory at least seven times. And besides the fact that Poland is in the EU and governed by European regulations, it’s a Danish-owned factory, so the employees are treated like Danish employees. Which is to say, extremely well. 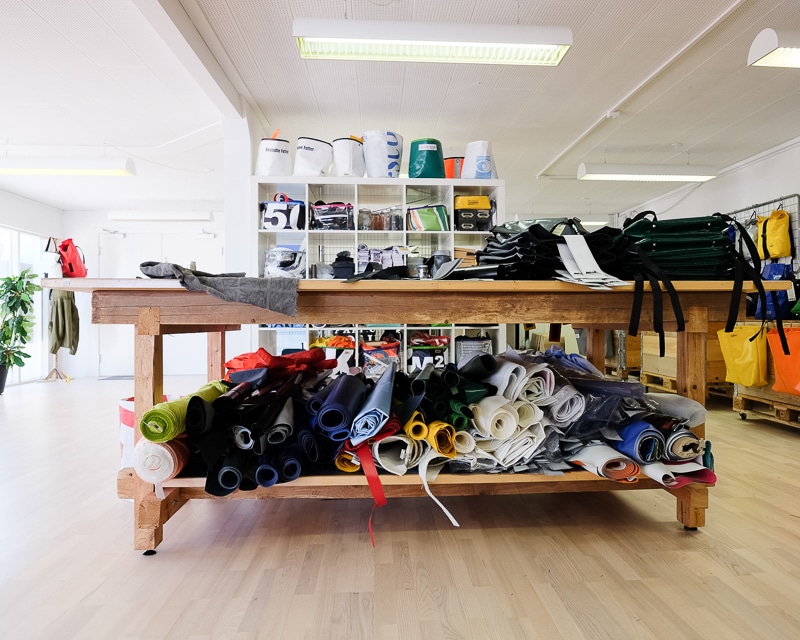 The day I visited, Helen was sewing a fluorescent orange material finished with reflective tape into a bag fit for an arctic explorer. grünBAG has a partnership with the Danish company Viking Lifesaving Equipment. It turns out that every five to ten years, modern inflatable lifeboats have to be completely replaced – even though they’ve never been unpacked! (That’s a good thing, of course.) So grünBAG takes these completely new lifeboats and turns them into the most rugged rucksacks and accessories you’ve ever laid eyes on. 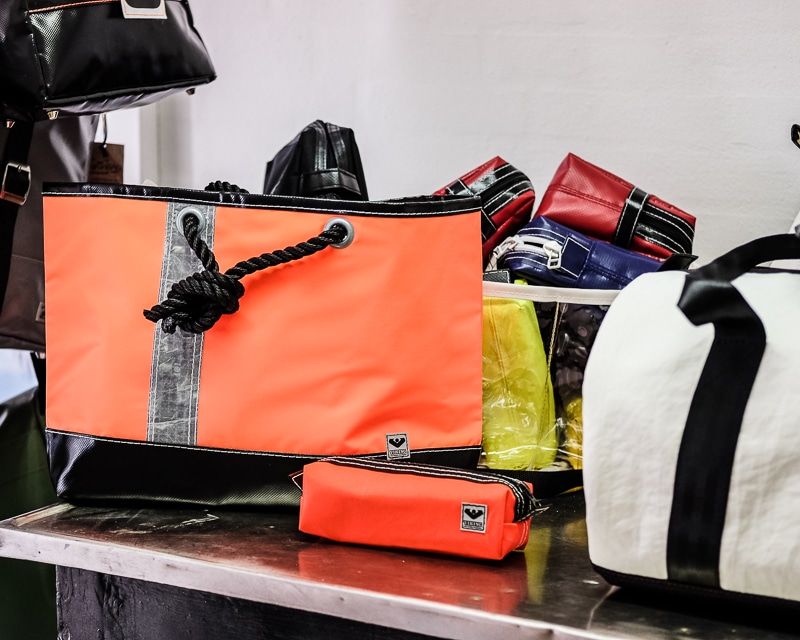 They showed me all the other materials they upcycle into their bags: end cuts from giant rolls of 18-wheeler truck cover material, the leftovers from making party tents, safety suit lining, old sailboat sails, old car seat belts, old vinyl advertisements, and used “big-bags” or giant bags that are used to transport salt that are used once and then thrown out. The buckles are made in Denmark from recycled nylon, or upcycled from old military pant suspenders. All these materials are from Danish companies, manufactured in Denmark, and are rugged and long-lasting.

I’m shocked by all the waste that is going on behind the scenes with industrial companies. “These companies are throwing out tons per day,” Helen says. “They have to pay 150 euros per ton. So they’re happy to give it to us.” It’s more than grünBAG can currently take, obviously, which is why I would like to see this company keep growing!

Ninety percent of materials in the final product are recycled. Just the thread, Velcro, and metal feet are newly bought, and the zipper, though sometimes they recycle that from life rafts. If you choose a backpack with the simple leather strap and buckle instead of the branded velcro strap, that will be new, and make your backpack not vegan, obviously. (They used to try source old belts but it was too complicated and costly.) They estimate they end up throwing out about 2% of what they get in, with scraps go to artists and schools, or into fun party triangle banners. 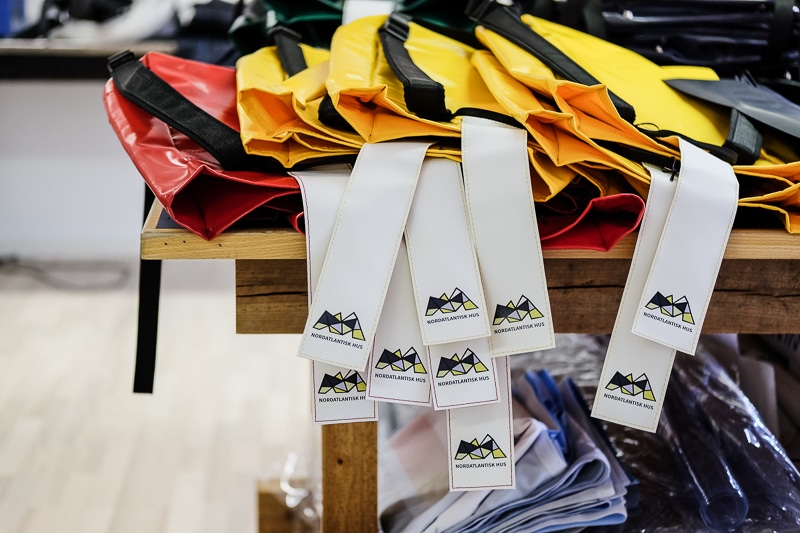 I notice they have a pile of backpacks on the cutting table with a logo on the strap – they’re for Nordatlantisk Hus, a Danish museum. grünBAG does a lot of corporate gifting, especially for architecture firms – they have a special Architect bag even. The architects like the design, and also that the backpacks can be covered in dirt and concrete dust and wiped clean after.

A small local printer does the logos for them. You can also order a custom backpack for yourself or for a gift. Maybe I should have had the EcoCult logo printed on mine? 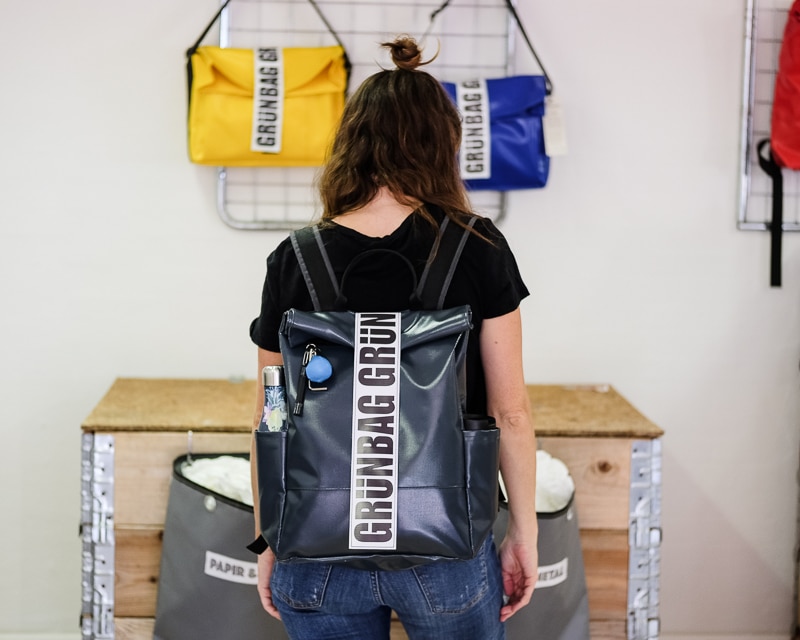 So, finally, the reveal!

Here were my requirements for the perfect backpack for being a sustainable digital nomad:

When they showed me the backpack that was custom-made for me, it was even better than I had requested! It’s lightweight, and holds so much more than it looks like it will – but even when it’s full, it maintains a shockingly rectangular, slim profile. (My old backpack made me feel like a turtle when it was full.) It can be overstuffed and it will still close, with the velcro shutting it tight. The deep zippered pocket on the front holds a surprising amount as well, but is hidden underneath the fold-over top, so that pickpockets don’t even know it’s there. This is a huge thing for me, because I never felt safe with my wallet or other valuables in my old backpack. And my laptop and magazines are well protected, slipped into the interior pockets and folded inside the waterproof upcycled truck cover.

Just check out everything that I put inside (my camera isn’t picture because I used it to take this photo): 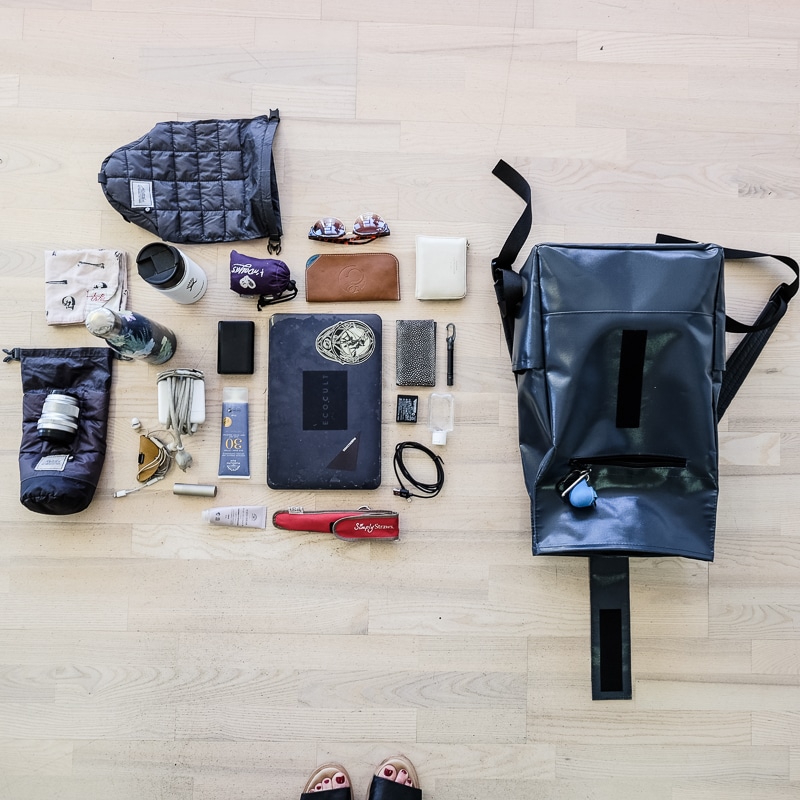 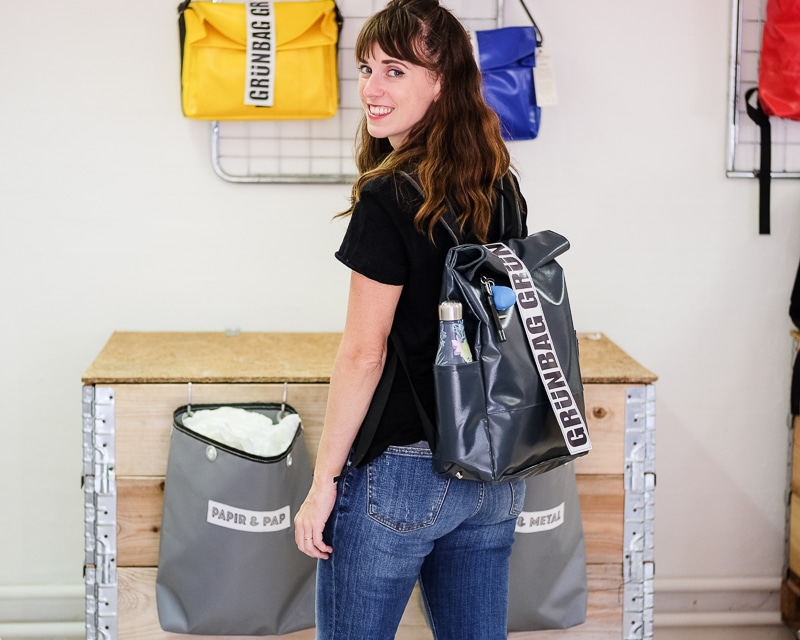 (I’ve stuffed my camera, three books, two magazines in there as well and it does great.)

Even better news: they decided they liked my design so much, that they’re putting it up for sale on their website. So now you can order a grünBAG Alden backpack for yourself! And if you would like the simple thin leather or non-leather strap with the buckle instead of the branded Grünbag Velcro strap, that’s an option as well. Just let them know – they are very accommodating and flexible.

I’ve been wearing this backpack for more than a month now as we’ve traveled, and I literally can’t find anything wrong with it. I call it my Mary Poppin’s bag – so much stuff goes inside! I’m thinking that this will be the lifetime backpack I’ve been looking for, that will protect my camera from the rain in Southeast Asia, look chic on the discerning streets of Northern Europe, and keep my stuff protected from pickpockets in tourist-y cities like Prague and Budapest.

What more could an eco traveler ask for? 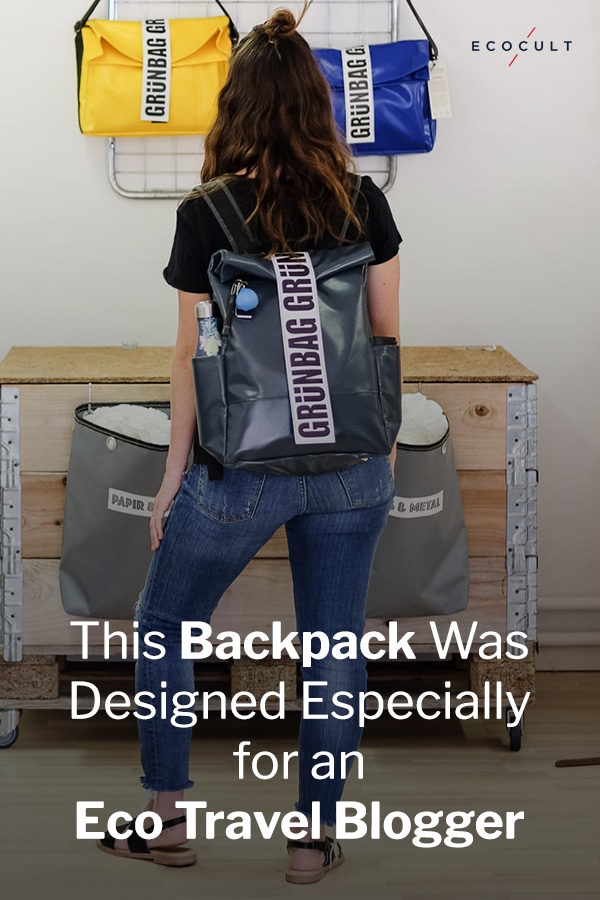 A Traveler's Review: Pons Avarcas Are Ethical, But Are They Sustainable?

Weekend Reading: I Think the World Might Actually Be Ending