Our apartment is only 650 square feet – not palatial at all. The bathroom is small, and felt cramped when we first saw it. But we used some clever tricks to get more storage inside, plus make it feel large, stately, and luxurious!

And yes, some of these require a renovation, but some of them, like the medicine cabinet and shower curtain tips, you can do with minimal tools and in an hour or two.

To be totally honest, the bathroom is the most difficult room in the house to renovate in an eco-friendly way. I found this out the hard way.

I was quite proud of myself when I found some new, gorgeous brass fixtures at Build It Green!… until I found out that all your fixtures and the hardware that fits into them behind the wall have to be by the same manufacturer in order to work together. (Which is ridiculous, in my opinion. What a waste.) So I ended up with a lot of useless brass fixtures on my hands, and had to order new, conventional ones in a panic a week before we were supposed to move in. If I had to do it again, I would have gotten a special low-flow shower head. Maybe I still will, eventually.

Tip #2: Get a medicine cabinet. You don’t need one that goes into the wall. Just buy one that sits on top of it. This is crucial for storing away all your little things that will clutter up the counter and make it feel smaller. I did my best to find a reclaimed medicine cabinet that would sit on the wall, not inside it, since there was no space in the wall. But I could only find the kind that go into the wall. So the one you see is new from Home Depot, too. After a year, the paint started peeling, however, so I don’t recommend Home Depot for medicine cabinets. You’ll have to fix it quickly. 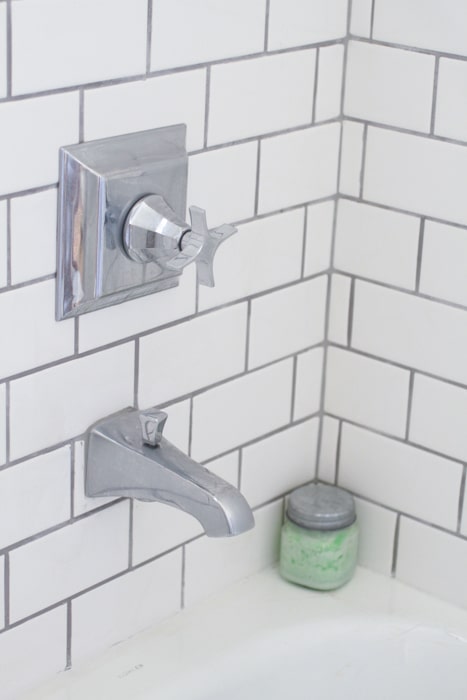 The tub is reclaimed, though it comes with some … character. It has some hairline cracks in two corners that I didn’t see until it was too late. But everyone has graciously avoided mentioning them to me. You can’t really see them in the picture, but you can see them in person!

But the basin sink is reclaimed as well – and it’s the best reclaimed thing in the whole bathroom. That, I’m happy I found.

Tip #3:Locate the toilet under the window.

The biggest change we made in the bathroom was switching the toilet and the vanity. Before, the vanity was below the window, and the mirror was over the toilet – an awkward setup. We switched the setup and put the water-saving, dual-flush toilet under the window. Now, you don’t have to lean over the toilet to look at your reflection!

You can see from the above picture that our apartment has high ceilings. So locating the curtain rod at a normal height was just awkward! We moved the curtain rod up high, and then bought an extra long shower curtain. It makes it seem palatial! 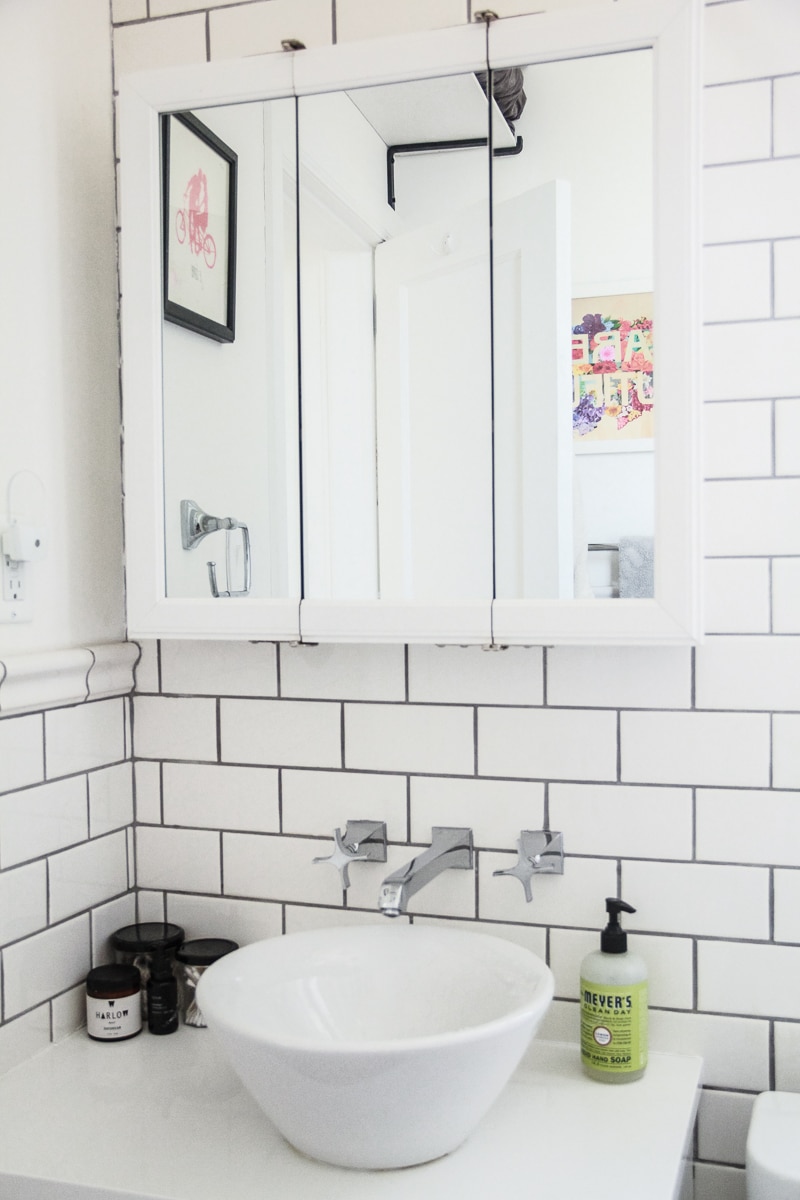 I had also bought a reclaimed vanity in black, and a white reclaimed countertop. My contractor lost the vanity, however, and in another panic, we went to Home Depot and bought a conventional white one, outfitting it with two extra knobs from the kitchen and a white reclaimed countertop to class it up a bit. And you know what? I’m glad we ended up with all white. It seems so much more spacious in there, without a heavy black cabinet sucking all the light toward it. But please do get a cabinet. Again, it doesn’t feel as cluttered as a pipe or even a curtain covering your stuff.

Large tile will draw attention to the tiny floor space. Tiny tiles will fit in much better.

The subway and hexagonal tile we found is also conventional and new (and affordable. If you’re looking for eco-friendly tile options, most are fancy and expensive). But doesn’t it look pretty? I wanted it to fit in with the early 20th century look of the apartment.

We didn’t have a closet in the bathroom, and only one closet outside of it, which we needed for our coats and shoes. So we’re quite proud of the shelf, where we store our towels and sheets. And because it’s above the door, you don’t see it when you walk in, so it doesn’t clutter the space. We painted some reclaimed wood with no-VOC paint, and put it up using handmade brackets off of Etsy.

Tip #8: Do something with the heating pipe.

Nothing makes a bathroom look low end like an exposed heating pipe. We enclosed our exposed heating pipe to make it pretty. Unfortunately, our contractor messed it up somehow and not much heat gets out into the bathroom. To fix it, we would have to rip some stuff out. We’re going to save that project for a few years down the road. Tip: Make sure your heating pipe is all good before you tile it closed. Or, make sure you have a way to open it again.

Tip #9: Accessorize sparingly. You don’t want to clutter up your tiny bathroom! We try to keep ours minimalist, and go with matching tones of blond wood and a dark metal.

So there you have it! How we managed to make a tiny bathroom with a lot of stuff feel large and minimalist.

The Danger of Pity Shopping: When the Unsustainable Option Can Actually More Sustainable

What Is Sustainable Fashion? Here's My Take