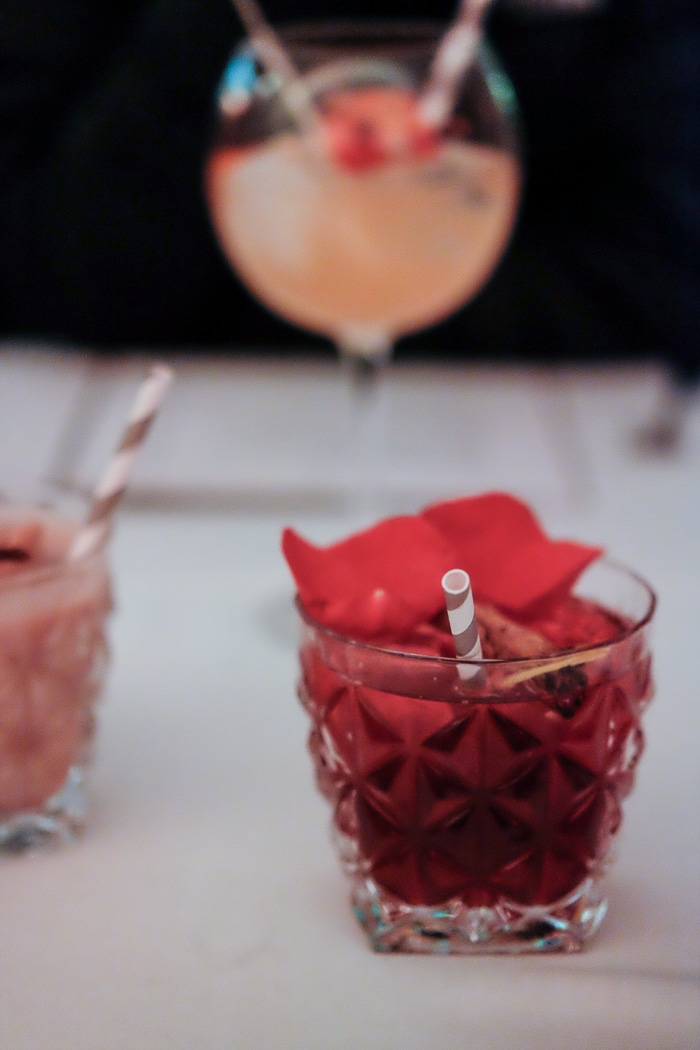 Of course, fresh and healthy produce is not the norm in Mexico City, or Mexico in general. Don’t let the $7 hipster tacos in Brooklyn and Portland fool you: Mexicans like their meat plain in a tortilla without the flourish of produce, beyond some limp cilantro in a suspect side bowl. And factory farming has made some serious inroads here. (A post on how to eat healthfully and sustainably – when you don’t have the budget for three $75 meals a day –  in Mexico is on the calendar for this blog.)

So believe me when I tell you that you need to seek out the sustainable and fresh restaurants. They exist, but in a city of 20 million, there aren’t nearly enough.

Where the Organic Comes From

Surprisingly, Mexico City has a lot of green space – more than half of this mega metropolis is conservation land.

So, many of these A-list international chefs and restaurants source from the chinampas, traditional floating farms in the Xochimilco area. If you’ve visited Mexico City, you may know Xochimilco as a tourist-mobbed canal area where you can buy a bucket of beers and proceed to get wasted while floating down a canal on a colorful boat. But beyond the tourist area lies a fertile farm area and Unesco World Heritage site, that not only supplies organic ingredients to the city’s top restaurants, but also regulates the city’s temperature, keeping it livable for the 20 million residents of what is essentially a drained former lake that suffers from acute water scarcity. Of course, these farms/green areas are threatened by development.

We tried our hardest to arrange a special tour of the organic farms through a local non-profit, De La Chinampa. Unfortunately, it is ruinously expensive unless you have a group of ten or more people committed to the expedition, when it drops to about USD $15 per person (and includes lunch). If you can pull that off, contact the director Ricardo through Facebook. Spanish helps.

If you can’t pull that off, then plan ahead, and start making reservations a couple months in advance for these restaurants: 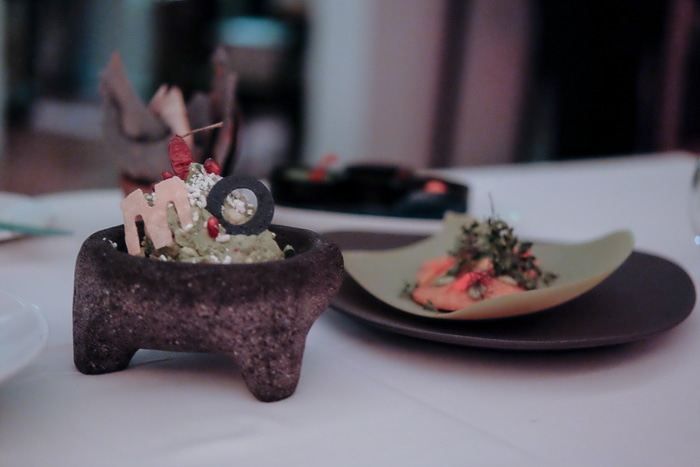 Dulce Patria (Polanco) – I suggest you order the tasting menu, in which each of the many plates is presented like a work of art celebrating consciously-sourced, seasonal, and traditional Mexican ingredients – and that includes crickets! The menu has a large selection of haute and healthy mocktails that are such a delight to order and imbibe (frozen incense?) that none of us missed alcohol. Bonus: the head chef is female.

El Cardenal – With several locations in Mexico City, this traditional farm-to-table restaurant is packed with Mexicans enjoying a special meal with colleagues or family. You can try ant eggs, beef tongue, or vegetarian items piled inside a taco shell you pull from a basket that is constantly refilled by the waitstaff. The straws are compostable, too! You can make a reservation a day in advance; we were told we would have to wait for lunch, until my husband pulled the, “My name is Alejandro” card (that’s his middle name) and got us a table.

Pujol (Polanco) – One of the most famous restaurants in Mexico City, period, Pujol specializes in farm-to-table Mexican cuisine elevated to a perch  – number 20 in the whole world, to be precise. The new restaurant is furnished entirely with Mexican-made furniture and decor, and the ingredients come from either Oaxaca (where the chef has another restaurant) or Xochimilco. We did not plan ahead far enough, so we were unable to experience this restaurant. So, start calling as soon as you have your plane tickets. 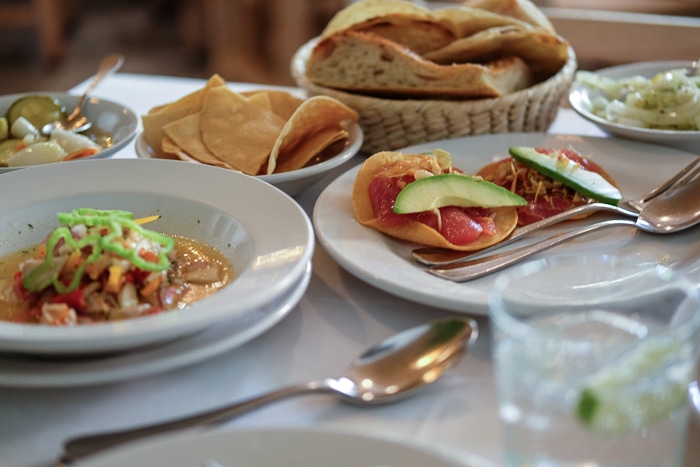 Contramar (Roma Norte) – This seafood restaurant may seem casual, but it’s got one of the most coveted tables in Mexico City. We arrived right when it opened for lunch on our last day in Mexico City, and my husband had to work his native-Spanish-speaker magic to snag us a table. The sustainably sourced fish and shellfish is accompanied by chinampa-grown vegetables. If you can’t decide or decipher the menu, the friendly waiters will guide you with enthusiasm. You won’t leave disappointed.

Raíz Cocina de Estaciones (Polanco) – It might be a little easier to get a table at this relaxed, affordable, and reportedly under-rated farm-to-table restaurant, serving house-made corn tortillas, trout from local mountain streams, edible flowers, wild greens, and other fresh produce.

Quintonil (Polanco) – This farm-to-table, avant-garde take on Mexican cuisine is ranked as third best in Mexico City.  Try the sustainably-caught catch of the day for seafood, or the ever present squash. Otherwise, the menu is seasonal. 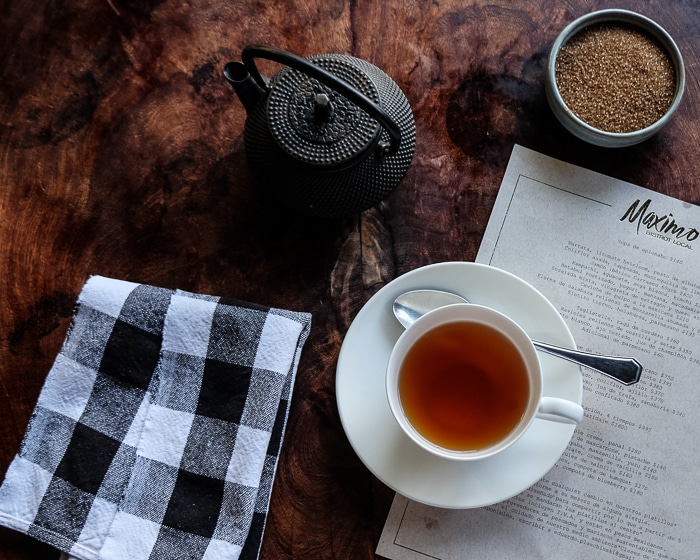 Máximo Bistro (Roma Norte) – With a European flair, this restaurant is committed to showcasing fresh produce from in and around Mexico City, at relatively affordable prices. Up to two-thirds of the ingredients come from local farms, including Xochimilco. And the furniture, decor, and place settings are also fair trade, sustainable and local. 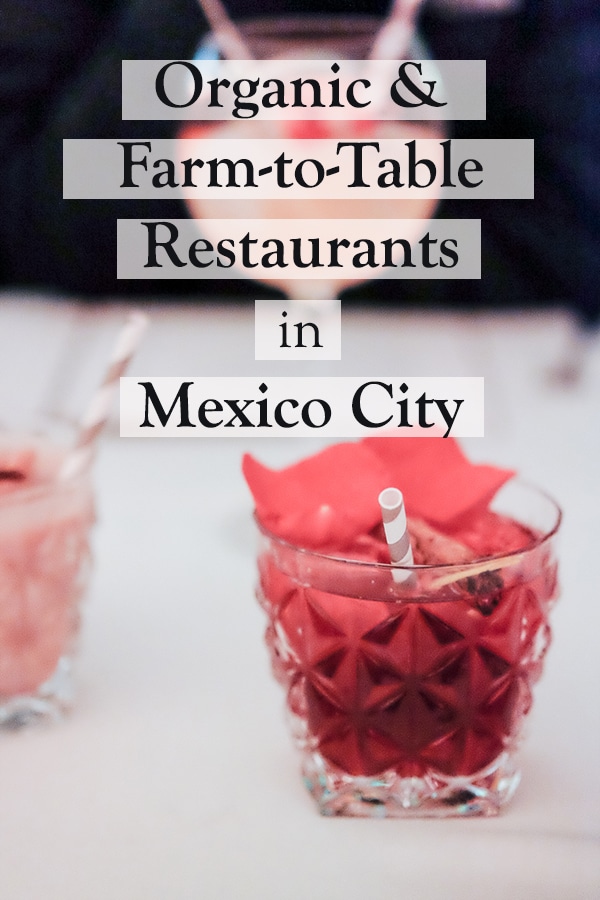