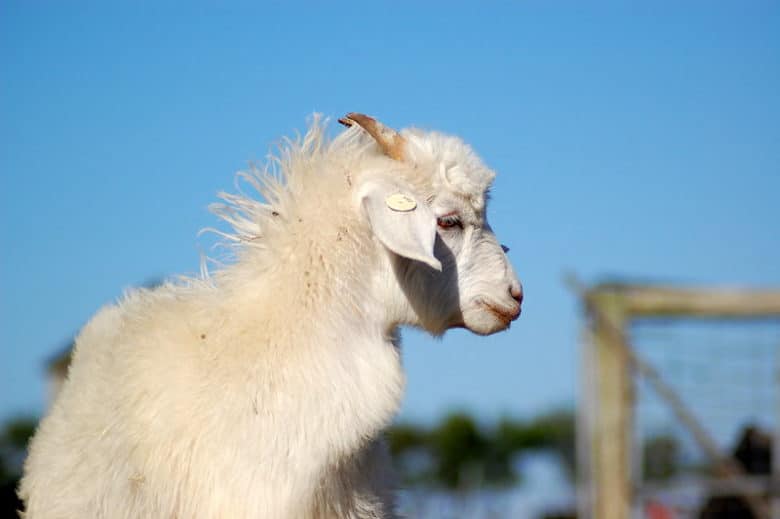 I’ve known for some years that there are problems with our supply of cashmere. Once reserved for only those who could afford to fork over $300, cashmere has since shown up in fast-fashion chains like Uniqlo for a third of the price. That’s great for the inclusivity (though access to cashmere is not exactly a human right) but this democratization and overproduction of cashmere has inevitably led to ill effects on the environment and threatened the livelihoods of Mongolian nomadic communities.

As China has taken control of cashmere flowing out of Mongolia and ramped up their spinning and knitting technology, goat herders are going for quantity over quality, switching from other traditional animals like yaks to cashmere goats. The number of goats in Mongolia has tripled to more than 61 million. As they graze the grasslands down to nubs and dig their millions of sharp hooves into the ground, they’re damaging the steppe and causing desertification. Combined with climate change and artisanal mining, overgrazing has led to an estimated 70% of grazing lands being considered degraded. It may be irreversible within five years.

In fact, according to Kering’s EP&L,  cashmere out of Mongolia has over 36 times the negative environmental impact of wool. 36 times! Click To Tweet

I’ve talked before about my deep and abiding love for alpaca as a sustainable and ethical alternative to cashmere. (And I want to write about yak as another alternative soon.) But, there are still a lot of conscious brands out there using cashmere from Asia. So instead of writing it off completely, I wanted to dig into the subject and find out if sustainable and ethical cashmere fashion exists, and if so, how to choose better.

Is Cashmere Cruelty-Free and Fair Trade?

Cashmere is named after Kashmir, the now disputed territory between India and Pakistan, and traditional producer of famous pashmina scarves. But Kashmir goats have traditionally been raised across Central and Northern Asia, including in Tibet and Nepal. The largest producers (in order) are China, Mongolia, Iran, and Afghanistan. It’s the second highest-earning export from Mongolia. Each sweater requires about four goats to produce.

“We believe that the cashmere goat is just about the only animal you can take something from without hurting it at all,” says Jacqui Burger, the Dutch co-founder of the fair trade cashmere label Sogoodtowear. They are largely raised by nomadic herders, wandering from place to place in search of grass to eat. The goats grow thick coats in the winter (the colder the weather, the better the cashmere).  “This coat they want to get rid of in the spring, so if you don’t comb it, they’ll comb it themselves on shrubs and bushes,” Burger explains.  It’s like giving your pet cat a brush, albeit if your pet cat was rather large and you needed to immobilize them for a little bit so you could actually collect the hair efficiently. On North American farms, that’s done using a headstock so they don’t wander away. It doesn’t look particularly comfortable, but no pain is involved. “It’s done within a few minutes,” Burger says. “And they run off quite happy.”

It’s not unheard of to shear a cashmere goat, but the quality of the resulting fiber is rather mixed. And it’s more stressful for the goat (just imagine trying to shave your cat versus just give him a brush) and exposes them to sunburn or windburn.

Supporting a nomadic people’s traditional way of life is great, of course. Unfortunately, they usually have little leverage or power to set the price for raw cashmere. Prices are determined by middlemen, who, as middlemen do, mark up the prices before selling the cashmere to the spinning mills.

So, cashmere in itself is a great fiber! It’s natural, organic, biodegradable, functional, soft, and (somewhat) supports the livelihood of traditional nomads. The world would be a poorer place without cashmere in it, for certain. There are just three main issues with it. One is that too many goats are degrading the environment in Mongolia. The second is that herders are not realizing the full financial benefit of raising these goats and harvesting cashmere. The third is what happens to it after it gets harvested. It’s subject to the same processes as many other fibers, including being mixed with synthetics, bleached, and dyed with synthetic and toxic dyes by underpaid workers.

So what can you do as a conscious fashion consumer if you want to wear sustainable and just cashmere?

1. Invest in Well-Made Cashmere That Will Last a Long Time

I just don’t see the point in buying cheap cashmere just to say you own cashmere. It’s not like cashmere sweaters have a  big Cashmere logo on them that you can show off for prestige. It’s a purchase that is an investment in you, like a good massage, a quality mattress, or organic apples from the farmer’s market. If you feel the need to save money outweighs your quest for softness, then just go with another wool.

So, say that you’re ready to invest. What to look for?

The best cashmere comes from the coldest parts of Mongolia, because it grows longer on the goats to protect them from the elements and therefore is higher quality once spun and knit. According to Racked, high-quality cashmere, technically classified as Grade A, will be slightly stiffer when you buy it, but will soften up over time. It will be less likely to pill or get holes.

Then you should think about where it’s spun and knitted. The most luxurious cashmere that will last the longest is knitted in heritage factories in Italy and Scotland, while more affordable cashmere is knitted in China.

Frances Austen’s cashmere sweaters, for example, are made from Oeko-Tex Standard 100 certified yarn that is spun by Cariaggi, a well-regarded Italian mill whose fibers averages 38 mm in length, compared to Chinese cashmere that averages 32 mm. The factory runs on 100% renewable energy (hydro, solar, wind), has reduced energy consumption by 40% and carbon emissions by 23% in the past three years, collects rainwater and recycles water from the dyeing process. Cariaggi started a project in 2015 to support and document a sustainable cashmere farming operation in Mongolia, and says that all the cashmere is brushed, not sheared, once a year. The cashmere yarn is sent to Johnstons of Elgin, a 200-year-old family-owned factory in Scotland well known for crafting luxury textiles and socially responsible practices. And Frances Austin will take your sweater back for repair. When I posted a video of my cat kneading my new Frances Austin sweater that the brand sent me, the founder Margaret didn’t care at all. “I had a giggle but they’re pretty indestructible so I thought it was a good wear test,” she messaged me. That’s a recommendation to me!

This cashmere made from extras and offcuts does have a lower impact than virgin cashmere, but it does rely on the continued existence of virgin cashmere, so it’s not the silver bullet to the issues of desertification in Mongolia. Ideally, someday we’ll be able to feed old cashmere sweaters that are no longer wearable back into the system and recycle them into new cashmere sweaters. Until then, we’ll have to combine this with the next strategy…

3. Buy Fair-Trade Cashmere From a Brand That Is Improving the Supply Chain

The scrappy Dutch brand SoGoodToWear is trying to revive traditional cashmere goat herding in Nepal. “I think if I reincarnate as an animal I would reincarnate as a goat in Nepal,” says Burger. “It was a very Buddhist approach — they were one with the goat. They would live with the goat and treat it very respectfully as a being.” Unfortunately, there are few Nepalese goats remaining and they’re ill-suited for the warming climate of current Nepal, which is more humid than in years past and can lead to moldy cashmere. Sogoodtowear imports top cashmere goats from Australia and interbreeds them with Nepalese goats. The first of these climate-resistant goats were born this summer.  Right now Sogoodtowear sweaters are 8% Nepal cashmere and 92% cashmere from suppliers in Italy and China that are certified as animal-friendly. They are aiming for 100% Nepalese cashmere sweaters in six years.

The direct-to-consumer brand Naadam claims to be the fairest source of cashmere ever, by buying directly from Mongolian herders and cutting out the middleman on the front and back end, paying 50% more to the herders, and charging the end consumer 50% less. They invest in veterinary care for the goats, only buy brushed cashmere, and fenced off 500-square-mile portion of the Gobi desert to combat desertification. Their cashmere is spun in certified Chinese facilities that have a closed-loop filtration system for dyewater, and they use natural and biodegradable dyes.

Kering, owner of Gucci, Saint Laurent, Bottega Veneta, and Balenciaga, has partnered with the Wildlife Conservation Society on a project to improve the sustainability of cashmere farming in Mongolia. The focus is on improving goat combing techniques, teaching the herders how to sort fiber, helping breed higher quality goats, supporting veterinary services, optimizing grazing to areas that can support it, and helping herders access markets for goat meat, cheese, and milk so they can earn more income on fewer goats. They’re also working on a certification system for sustainable cashmere. Buying from one of these luxury brands means you’re getting a high-quality product (see point #1) and supporting, in theory, a more sustainable cashmere supply chain, but it doesn’t mean the cashmere in your product is necessarily more sustainably produced than the alternative.

As with almost everything in this world, cashmere’s problems stem from overproduction and exploitation. If you save up for one high-quality cashmere sweater, choose thoughtfully, and take care of it so it lasts you a decade or more, then you can consider yourself a conscious cashmere wearer. 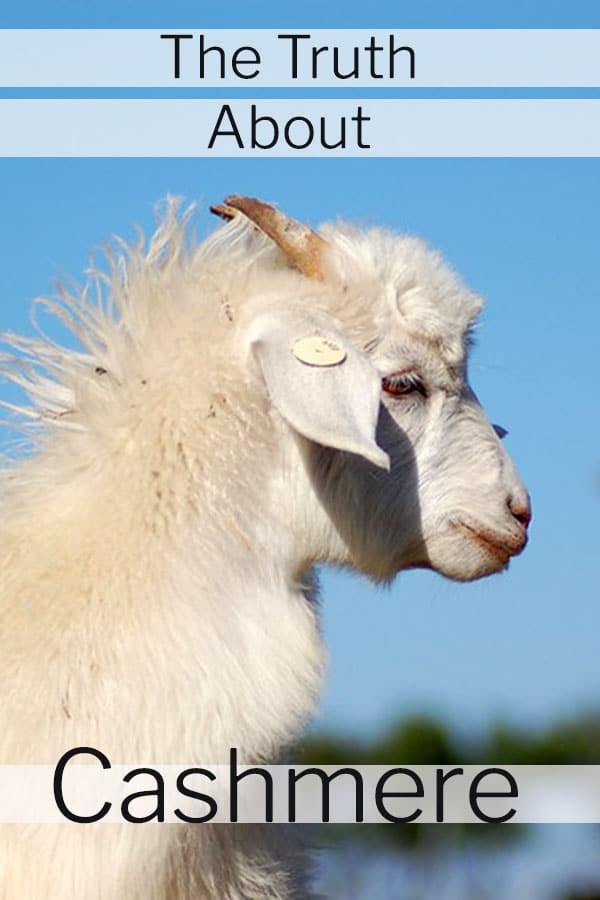 An Open Letter to My Family on Sustainable Gift Giving

Where to Get the Most Beautiful, Ethical, and Eco-Friendly Decor for Your Home