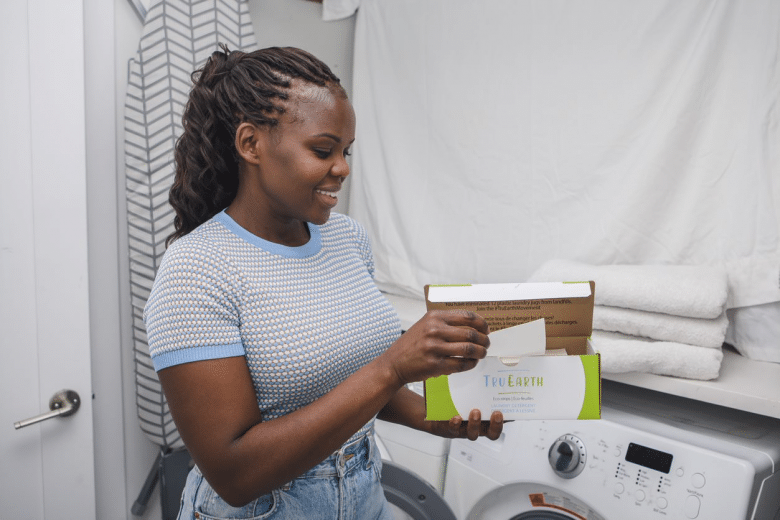 If you’re washing your organic clothing with detergents containing toxic chemicals, then you’re nullifying all the good of your sustainable fashion purchase.

Laundry detergent is one of the most frequently purchased household goods, but few understand how it performs the miracle of washing. The ingredients listed on the back of bottles may as well be gibberish to chemistry illiterates. This gives many laundry detergent manufacturers a free pass to formulate their products with all sorts of nasty chemicals and additives.

To help you navigate the complexities of detergent formulation, we’re breaking down exactly what goes into laundry detergent, what chemicals to avoid, and safer suggestions.

What are the ingredients in laundry detergent and how do they work?

Surfactants are responsible for cleaning out the grime that is released in the water once the washing machine starts spinning. Surfactant molecules band together, surround a piece of dirt, and carry it away once the water is drained.

Builders are surfactant’s right-hand men. They remove calcium, magnesium, and other dissolved minerals from the water so that the surfactants can exclusively target the dirt. Builders also help prevent calcium build-up in pipes.

Both bleaching agents and enzymes target stains. The type of bleach in your laundry detergent is often hydrogen peroxide and it eradicates tough organic stains (like blueberries or coffee). Bleaching is also the reason why hot-water washing has become the norm: hydrogen peroxide is only activated once it reaches above 60C/140F.

Enzymes tackle various other types of stains, such as grease, protein (like egg yolk or milk), starch (from potatoes or flour) and vegetable or fruit smudges.

Together, these ingredients form a well-coordinated army of molecules that thoroughly cleans our laundry. Especially when it comes to fragrances, manufacturers are often not obliged to disclose exact formulations because they are considered ‘trade secrets.’ This means that they could be sneaking harmful ingredients into their products by way of regulatory loopholes.

Many toxic chemicals in laundry detergents are flushed into the environment where they can harm marine life. Others are designed to stay on fabrics long-term to give our clothes a fresh smell and bright glow. As we live and sweat in our clothes, these chemicals are absorbed through our skin or inhaled, which can affect our health.

Nonylphenols and nonylphenol ethoxylates (NP/NPEs) are chemical surfactants that get rinsed out with each load of laundry. Sewage treatment plants are not equipped to filter out NP or NPEs. While detergents contain NPEs, which are less toxic than NPs, NPEs degrade into NPs, meaning their persistent harm to the environment is greater than their initial risk. Research has shown that NP/NPEs disrupt the reproductive and endocrine system in fish and shellfish. For instance, when exposed to this chemical, oyster embryos showed “delays in development, abnormalities in the shell hinge and increased death rates.”

Luckily, NP/NPEs have been phased out of laundry detergents in many places such as the United States, the EU, China and Canada. However, NP/NPEs still remain common in many developing countries. A study conducted in June 2020 by Toxic Links, an environmental NGO, tested ten Indian detergent brands and six major bodies of water in the country. All showed elevated levels of the harmful toxin.

Phosphate is another big one to steer clear of. It is used as a builder in many laundry detergents, and its impact on the environment is known to be highly destructive. When introduced into waterways, phosphate promotes the rapid growth of algae which deprives marine life of oxygen and sunlight.

The European Commission acted swiftly and approved a voluntary non-use agreement on phosphate in the 1980s, which later became a ban, with many manufacturers in the EU subsequently replacing phosphates with a safer builder called Zeolite A. Around the same time, Procter & Gamble, which owns Tide, Downy, Bounce, Cheer, and Gain, among others, started phasing out their use of phosphates in the United States. However, in many developing countries where affordable detergents dominate, the use of phosphates is still common practice.

Another harmful chemical found in detergents that has seeped its way into our drinking water is 1,4 Dioxane. This chemical is omitted from the list of ingredients on labels because, strictly speaking, it is not strictly an added ingredient, but a byproduct of the manufacturing process. It is considered a probable human carcinogen according to the Environmental Protection Agency (EPA), which states that it has caused “vertigo, drowsiness, headache, anorexia and irritation of the eyes, nose, throat, and lungs in humans.” Additionally, “damage to the liver and kidneys has been observed in rats chronically exposed in their drinking water” and “tumors have been observed in orally exposed animals.” A 2019 study by Citizens Campaign for the Environment has found that 1,4 Dioxane is present still today in many common detergents. So far, in the United States, the state of New York is the only one to have imposed a ban on this chemical.

Phthalates are usually omitted from ingredients lists because they are hidden behind the ‘fragrance’ label. Manufacturers are not legally obliged to disclose what their fragrances are composed of because they are considered “trade secrets.” The chemical, which is used in washing detergents to prolong that fresh laundry scent, is known to disrupt hormone and reproductive systems.

Many other chemicals used in fragrance can cause irritation or are carcinogenic, such as p-dichlorobenzene, styrene oxide, galaxolide, triclosan benzyl acetate or benzyl alcohol.

Optical brighteners create the illusion of brighter whites by coating your clothing with UV-reflectant particles that emit blue light. They are often made of benzene, a definite carcinogen. They can also irritate sensitive skin, eyes and lungs, and they decompose slowly in the environment. Some brands that are known to use optical brighteners are Tide, Dreft and Ariel.

One last important group to mention are silver nanoparticles (Ag NPs), which are used to eliminate odor-causing bacteria. Similar to optical brighteners, these particles seep into the ecosystem and damage aquatic life. Rodents exposed to Ag NPs in a laboratory setting have shown detrimental effects to their “circulatory, respiratory, central nervous and hepatic systems” as well as effects on dermal tissues, according to a study by Purdue University scientists. the US National Center for Biotechnology.

This list of harmful chemicals is by no means exhaustive. Unfortunately, there are hundreds of toxic substances that get added to our laundry detergents and other cosmetics or cleaning products.

Should you DIY your detergent?

Many eco-conscious individuals have opted to make their own DIY laundry detergents. The formulations, which often consist of washing soda, Borax and a bar of soap, are not harmful to the environment. However, the efficiency of these homemade detergents is questionable.

After using homemade detergent for about six months, Kathryn Kellogg of Going Zero Waste started noticing her clothing, towels and sheets becoming “oily and dingy.” She realized that the build-up of oil from the detergents, “attract and trap dirt in your textiles, creating the exact opposite effect you want.” She wasn’t able to save all her clothing from the ravages of the DIY detergent. Your great-grandmother may have used soap to scrub textiles on a washboard, but, “the problem lies with modern washing machines, which don’t agitate the soap enough to wash [it] clean from textiles,” she says. “Stick with a biodegradable detergent that’s been specifically formulated for removing dirt from textiles.”

What are the safest laundry detergents?

To ensure that you are choosing a safer detergent, the first thing to steer clear of are any hyperbolic messages on the packaging that promise “the brightest white” shirts or “odor-reducing” effects. This messaging likely indicates that the formulations are packed with optical brighteners, silver nanoparticles or harsh bleaches that are bad for you and the environment.

Another step is to opt for fragrance-free laundry detergents to avoid potential hazardous chemicals that are hidden in the fragrance formula. If you’re worried you’ll miss that fresh “clean laundry” smell, pour a few drops of your favorite essential oil into your washing machine drawer.

Tru Earth creates eco-friendly laundry detergent that is paraben-free, phosphate-free, vegan, hypoallergenic, biodegradable, free of added dyes and 1,4-dioxane. Its Tru Earth Eco-Strips are made in Canada and are ultra-concentrated and come pre-measured that you just toss in the wash. The product is great for stinky workout gear and dissolves completely in hot or cold water. The detergent is packaged up in zero-waste compostable packaging.

Defunkify offers both liquid and powder detergents made with 87% bio-based ingredients, which are domestically sourced to reduce transit emissions. The brand concentrates its formulas and never uses fillers. Every Defunkify product is 100% Plastic Neutral, meaning it measures its plastic footprint and then offsets its total footprint by funding plastic waste recovery that is destined for marine ecosystems. Defunkify is also a partner of 1% For The Planet. The brand donates 1% of its annual revenue to environmentally-focused non-profit organizations around the world.

Dropps laundry detergents are vegan and formulated without dyes, phthalate, or phosphate. You can purchase detergents for stain, odor, sensitive skin, active and fabric softener. All of its products are packaged up in compostable packaging. Dropps is also reclaiming 100% of the carbon footprint of the shipping of all of its products, as well as the electricity used by all of its employees working from home in 2021 by expanding access to clean energy to four homes in Jackson, TN.

Puracy’s laundry detergents are safe for sensitive skin. Its products are plant-based made with sustainably-harvested coconuts and common vegetables.

Public Goods’ laundry detergent pods are made entirely of plants. Its products are hypoallergenic, dermatologist-tested and formulated without any harmful chemicals or synthetic fragrance. 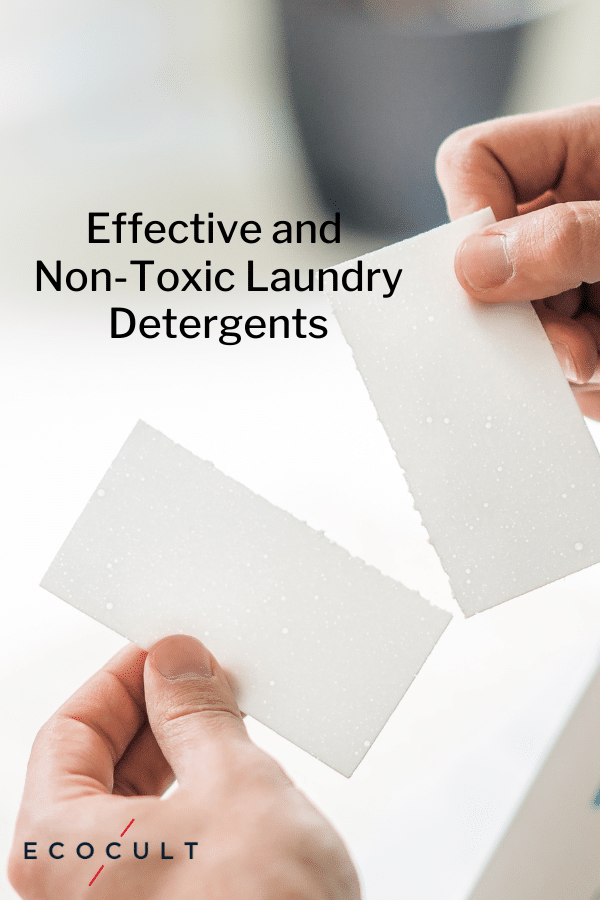 The Coziest and Most Comfortable Sustainable & Ethical Underwear Brands

Why Aren't We All Wearing American-Grown Hemp?