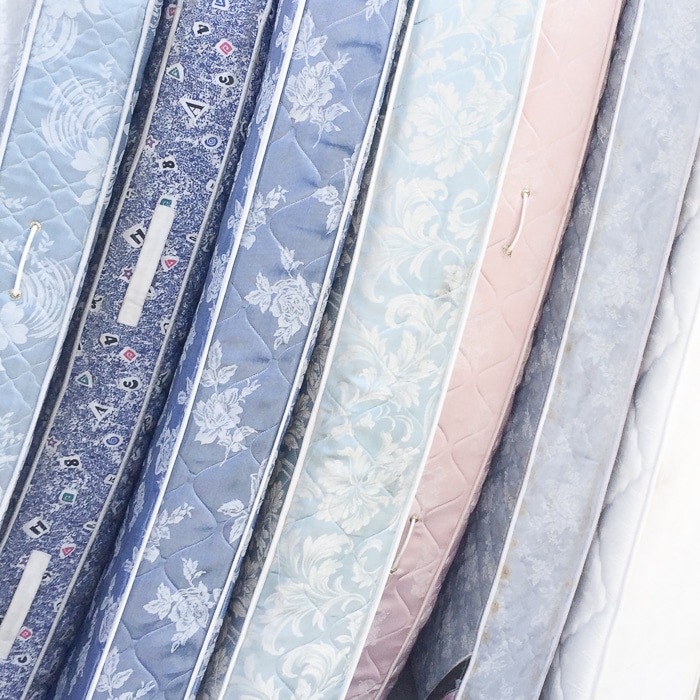 According to the Mattress Recycling Council, “Americans as a whole dispose approximately 15-20 million mattresses and box springs per year.”

I recently purchased a new mattress from Keetsa, which markets themselves as eco-friendly. When I asked the store manager if they have a recycling program for my old mattress, he looked at me, perplexed, and suggested I put it out on the street for the sanitation department to pick up.

For my sustainable, eco-conscious mind, this simply wasn’t good enough. So I did what any millennial would do: I Googled recycle mattress NYC. What resulted was a staggering lack of mattress recycling in a city with more than 8 million people. But, I did manage to find a couple options: Renewable Recycling, Inc if you live in NYC and 1-800-GOT-JUNK if you live elsewhere in the US.

If You Live Outside of NYC

1-800-GOT-JUNK recently partnered with Spindle to create a mattress recycling program that’s available to mattress buyers all throughout the US. They will come and haul away your mattress and if it’s still in good enough condition, they will donate it. If it’s not, they’ll recycle it. The team at 1-800-GOT-JUNK tells me that about 80-90% of a mattress is able to be saved from the landfill and recycled into something new. The wood frames, for example, may be processed into wood chips and used in particleboard, mulch, or animal bedding; the metal components like springs can be melted down and used in appliances, buildings, or vehicles; and the foam, wadding, and latex can be turned into carpet underlay, stuffing for pillows, or reupholstering furniture.

They make it really easy for you to recycle your mattress: just put in your zip code, the date and time you’re available to have them pick it up, and some info about what you’re getting rid of (size of bed, if there’s a box spring, etc.), and they take care of the rest.

In NYC, there’s Renewable Recycling, Inc., based locally in Oceanside, NY. Based on my apartment’s proximity to their warehouse, they offered to pick up my mattress to be recycled at a fair price.

Founded in 2014 by Christine Kiourtsis and her now husband Michael Hawksby, they are spearheading mattress recycling in NYC and Long Island. I sat down with Christine for a Q&A over coffee one summer morning. Her energy and passion for her craft were beaming and only became more evident as we conversed.

Julie: How did this idea of creating a mattress recycling company start?

Christine: I was working for a health club that is very involved in the community, and my husband and I were at a sporting event they had partnered with at this beautiful park. In the middle of all this greenery we saw a pile of mattresses just lying there… in this giant, beautiful park. We both thought, ‘This is terrible,’ and wondered, ‘Wow, how is this an issue and no one does anything about it?’”

My husband started investigating about how municipalities dispose of mattresses. The sanitation department has dump stations and people are supposed to put it in the front of their house and if they can’t, let’s just say, stores for example, the sanitation department will charge that store for picking up. Financially, people don’t want to do that and that’s when this niche of recycling mattresses came to our minds, because no one is really doing it.”

What was it about this environmental issue that peaked your interest?

I was previously employed by a green energy company so the idea resonated with me. After researching, I learned that mattresses harbor toxic chemicals from government mandated flame retardants (in some states) and polyurethane, which can leak into the landfill ground and contaminate our drinking water. Also, not only are they an eyesore, but used mattresses with the rusty springs hanging out become a safety hazard, especially in a recreational park like that one. So it became a passion and we just ran with it.

How did the business aspect generate?

“Well, we started in 2014. You have to prove yourself as a corporation for one year, get approved and certified, then you can apply for grants. I have become certified with two organizations that have helped guide me through the process: the Mattress Recycling Council based out of California, one of the first states to start the mattress recycling movement, and ISPA, the International Sleep Products Association, which is helping to get our word out on a more retail level. NYC has a grant for green energy which a company can apply for once they have become a certified business; they pick one company a year to fund. I submitted our proposal and hope to hear back this fall.

That’s great! And the goal is to be a viable resource for NYC consumers correct?”

Yes! That is the big market we are targeting. We are currently involved with smaller towns and their municipal departments and we aim to provide a great service and can save those towns money in the long run.

How do you help them save money?

Currently, there are companies that pick up the mattresses from transfer points associated with the sanitation departments and truck them to the landfills. Towns are billed per ton for this. One bundle of 20 mattresses equals one ton. Your average queen sized bed is 60 to 80 pounds, and after roughly 10 years it doubles in weight from wear and bodily fluid accumulation. Then, let’s say it rains and the mattress soaks up that water. Now, it’s three times the weight it originally was. So what once was only one ton is now two to three tons, and the towns are all paying for this. With our company, you pay per unit, not by weight. A town called Lynbrook, in Long Island, NY, was our first contract and they are already seeing the financial benefit six months later, so long term, this isn’t just great for the environment, it’s also fiscally beneficial as well.

How about for the individual consumer?

Right now we’re capable of carrying roughly 15 mattresses at a time. For the average homeowner that is environmentally conscious and wants to do the right thing, like yourself, we only charge by distance up to 100 miles from the facility in Oceanside, NY. But truthfully, we would never say no. For instance, if a hotel in New Jersey was getting rid of 50 mattresses and really wanted to do the right thing and use our service, at the present moment we’d have to charge them for a truck big enough to service that distance, but we would absolutely do that if they were willing to help foot that charge. The next step is purchasing a truck large enough to carry numerous mattresses at a time so we can service those with more volume or those that are farther away.

How does the recycling process work?

Everything gets recycled: the foam, the metal, the wood, everything. The box springs too. The way the mattress industry is going it’s becoming more foam based and away from the coils and springs. The foam has become the most lucrative part. The companies that buy the foam from us use it for upholstery, the insides of sporting equipment, bicycle seats, carpet pads, things like that. We also work with companies that will melt the metal down and resell it. It has been repurposed to make benches, lamp posts, light poles, etc.

How did you learn about the recycling process?

Honestly, trial and error. Our buyers do a great job of providing us with constructive criticism and saying, for example, ‘We can’t have any part of the pillow top on it because it jams up our machines, and the machines are expensive to repair.’ So we refined our process to meet that standard. We have a spinning table with cutters that chops the mattress up well and we’ve learned through repetition and refinement how to do this fast and effectively. It’s definitely a dirty job, but we love it and it’s rewarding.

What about mattresses that have bed bugs?

We have a container that has plexi glass on the top where we put contaminated mattresses into and using the sun as a natural energy the container heats up to at least 110 degrees to burn off any contaminants. Unfortunately, those mattresses still have to get discarded but we have been fortunate to not receive very many of them.

Have you reached out to newer companies like Casper to partner with?

“That is definitely a long term goal with us, to have a partnership with an eco-conscious company like Casper, which is based in Brooklyn. Connecticut, as well as California and Rhode Island, actually have laws stating that companies that sell mattresses have a designated service to recycle mattresses in return. When they drop off a new mattress to a consumer, they are required to pick up the old one for recycling. It’s a great model and that is something we as an independent company in New York want to strive to be.

Check out Renewable Recycling, Inc. here and find out how you can help “save the earth, one mattress at a time.”

Weekend Reading: Marie Claire Admits Fashion Might Be a Problem for the Climate