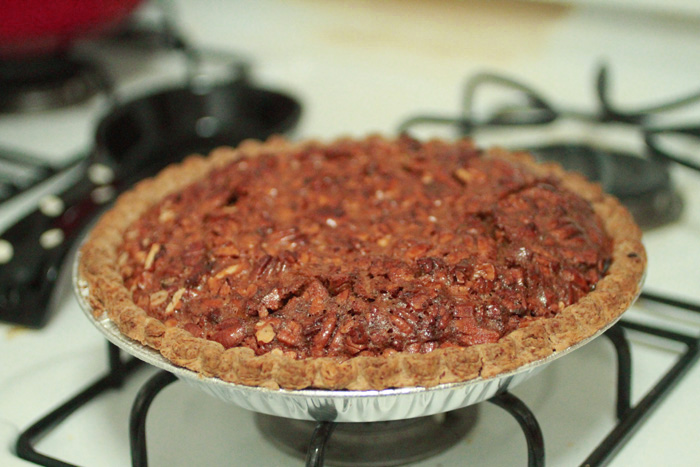 Did you know I’m a southern girl? I may not show it, with all my black, spiky clothes and accessories, and flaming liberalism. But this girl is North Carolina- and Maryland-bred. More importantly, I was raised on Mississippi cooking by my fabulous grandmother.

Now, this can present some extremely serious existential crises, usually around the holidays. It goes like this: I decide I want to recreate a childhood favorite. Say, my Nana’s cheese ball, her crumbly strawberry shortcake, southern fried donuts, or this year, her southern pecan pie. So I call her or my mom up and get the recipe, and that’s when the cognitive dissonance sets in.

Sometimes I know right away when I’m in trouble, usually when she says, “Well, you start with a box of Bisquick …” Or I take the recipe and head to Whole Foods or another natural grocery store, and get blank stares and/or derision. My quest for a spreadable cheddar-like cheese at Whole Foods last year was a fail–I ended up heading to a local, crappy grocery store and settling for what in this case qualified as the “real” ingredient: Kraft Roka cheese. When my coworkers were like, “Oh my God! This is so good! What’s in it?” I told them, “Don’t ask any questions. Just enjoy it.”

This year I stayed in New York City for Thanksgiving with my boyfriend. He’s a Thanksgiving orphan, since his family is Venezuelan. For my first grownup Thanksgiving, I just had to make pecan pie, a staple at southern holiday events. My grandmother’s family had a pecan tree right in the backyard when she was a little girl so they could gather up the nuts and put them right into a pie. Talk about #eatlocal. So I would consider the pecan pie even more important than the pumpkin pie! Plus, it’s a fun and easy activity for kids to help you with: arranging the pecans in the pan, mixing the ingredients and pouring it over the pie pan.

So this year I headed to Yoga Integral Foods to pick up the ingredients. (This is the grocery store that no-waste blogger Lauren frequents.) The young guy working there was as helpful as can be. First, he headed downstairs to find beautiful, raw, organic pecans in bulk. (Though he failed to tell me that they’re outrageously expensive this year because of a shortage.) But when I asked him if they had white sugar, he stopped short. “We don’t consider white sugar healthy, so we don’t carry it.” He led me to the sugar alternative section of the bulk section. He consulted with an employee who bakes and directed me to the coconut palm sugar, a light, crystalized, low-glycemic substitute, saying it would dissolve nicely like regular sugar. And no, it doesn’t taste like coconut.

Then, I asked for corn syrup. “Hey Joe*,” he called to a guy arranging gluten-free items on a shelf. “Do we have corn syrup?”

“I would get fired if we stocked corn syrup,” Joe replied. OK, then. I did some quick Google searching, and decided to get a jar of maple syrup instead for a richer, more natural flavor.

The pie was a success! My boyfriend ate a couple slices, then packaged up a few more to take home with him. It had a sweet, comforting taste, despite being the newfangled northerner’s version.

Here’s the result of my tinkering: 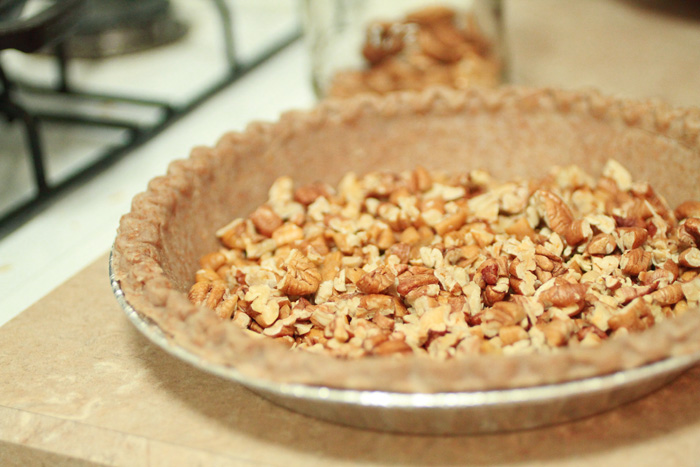 Preheat oven to 350 degrees. Arrange whole pecans on top of uncooked pie shell. Do not press down! Sprinkle chopped pecans on top of them. Beat eggs, then add butter, syrup and vanilla. Stir until blended. Combine sugar and flour and blend with egg mixture. Pour over pecans and let stand until pecans have risen to the top. Bake at 350 degrees for 45 minutes. Remove from oven and let rest for 15 minutes. Serve with vanilla ice cream.

*Name changed because I don’t remember it.

Why Is an Organic Shirt So Expensive?