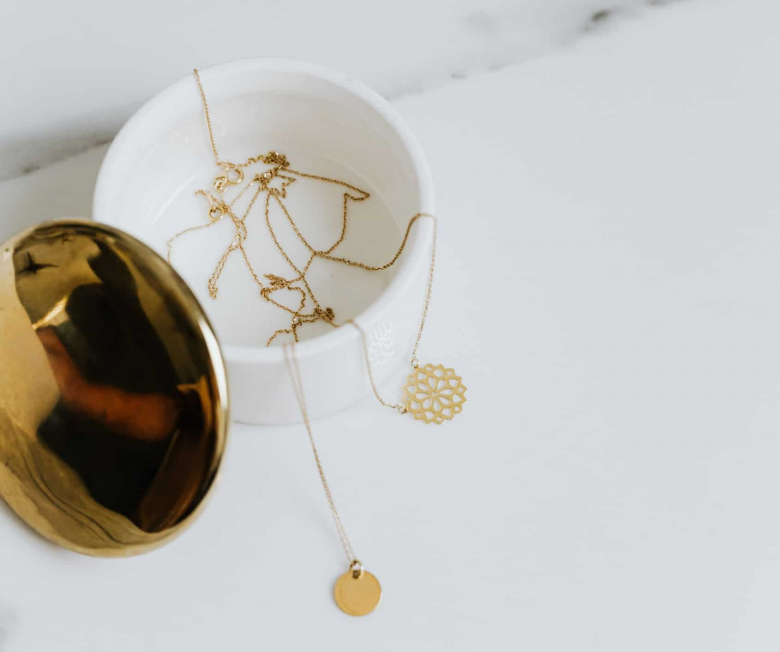 I still haven’t forgotten the disappointment of a “designer” gold vermeil necklace I bought from Net-a-Porter years ago that lasted mere months with its original luster before turning a marshy green color. It has stayed in its box ever since.

Gold jewelry is one piece of fashion that has never lost its sheen. Ancient Greeks wore beechnut pendants and Herakles knots in gleaming gold, the Incans paraded in heavy necklaces to show their connection to the sun gods, and King Tutankhamun was buried (inside a gold coffin) with a trove of fine gold pieces.

Today, such extravagance is out of the reach of most. Gold itself is less abundant, following centuries of aggressive mining, and for most businesses and consumers solid gold is prohibitively expensive, currently trading at around $63 per gram. Just as the gold-loving Nubians used to cover ceremonial objects in gold leaf to give the impression of luxury, the jewelry industry has substituted real solid gold with imitative techniques  —  and none of them is particularly sustainable.

While the clothing industry has awakened to the need for a more circular economy, the wastage in mass-market jewelry is not being scrutinized in the same way. In the contemporary jewelry market, the vast majority of gold-tone jewelry is either a cheaper substance such as copper or brass plated in a thin layer of the precious metal, or a solid silver piece plated with a layer of at least .175 microns of gold. Gold Vermeil is a subset of plated jewelry that is made of sterling silver and plated with at least 2.5 microns of gold. (Vermeil means “ruby” in French, a term that stuck from the Middle Ages when red copper was plated with silver. In the 18th-century, French goldsmiths developed a technique of using mercury to bond gold to cheaper metals.)

So what’s wrong with this process? The answer is a lack of longevity: Discoloration happens quickly with gold-plated pieces, with a greenish oxidized tinge that rubs off unpleasantly on the skin as the layer of gold dissipates. Gold vermeil can be replated if desired, approximately every 18 months, but the cumulative cost puts most people off the bother. This means that when you buy plated or vermeil jewelry, you’re investing in something you’ll soon throw away.

Rebekah Ann, a Brighton-based studio jewelry designer, makes pieces using exclusively recycled gold — a significant change from a few years ago, when she used to offer gold vermeil. “Fast-fashion jewelry can sometimes only last a few weeks,” she says. “People look at fast fashion but never look at jewelry — they’re often not advertising what it’s made from. The value of it has been lost.”

Ann made the move away from gold vermeil to reduce the environmental impact of her work. “One of the things about gold is that it can be recycled indefinitely. With the wear of gold vermeil, it’s just lost to the environment. I just didn’t feel comfortable using vermeil anymore, it didn’t align with my core values as a business.”

She now makes all her designs either with recycled gold or customers’ own pieces that they want reimagined. The decision to drop vermeil is one she is sticking to — though she’s aware the cost pressures on both sides of the buying equation will make wider change slow to appear.

“If I offered silver with gold vermeil I could grow my business dramatically, if you don’t offer it you do really limit yourself. It’s a really tricky line. A couple of jewelers I share a studio with are feeling really torn. As gold prices have climbed, purchases have declined as many can’t afford pieces in solid gold. Some of the pieces are really nice designs, you can understand [why people would buy them] if you want something new to wear. It’s really tricky in the industry.”

How Is Gold Plating Done?

D&M Jewellery Finishers in Birmingham offers a gold plating service to designers and brands around the world. Mark Johnston, co-owner, says his clientele is “high end and middle end, you’ve got Alex Monroe and then we’ve got designers that stock in John Lewis, Harrods,” two British department stores. He says that while some small designers do gold plating themselves to save on costs, more are using third-party platers like his as they scale up.

“Yes we use chemicals,” Johnston says, “but you can’t do [plating] without them.” D&M uses a third party to first strip the gold from the gold bars, a process that requires cyanide. Next, the gold, now in salt form as gold potassium cyanide, is dissolved into the electrolysis solution. The base material is then dipped into the solution and a current is run through it. By the time the finished product is boxed up and sent to stores, the chemicals have been washed off, but it’s important for jewelry makers to manage toxic cyanide waste safely.

The Importance of Ethical Gold Sourcing, Even for Plating

Like Ann, Johnston has concerns about transparency in the gold supply chain. “Top brands out there don’t even know where their jewelry comes from,” he says. “The consumer also needs to know more, but it’s all about price. Eventually, it’ll be forced on them. Companies like John Lewis are asking more questions now about where it’s done.” The Netherlands Center for the Promotion of Imports from developing countries, says it expects demand for traceability to rise in the coming years.

One of the changes Johnston has already made is to switch to Fairmined from South America. “We wanted to know where the gold came from, we were buying more and more, and the more digging we did, we didn’t like what we saw,” Johnston says, such as unlawful mining and bad working conditions. Mining gold requires mercury, and without the proper equipment and regulations, it can be dangerous, even fatal, for the miners. Fairmined gold assures the buyer that miners and the surrounding enviornment are protected.

So Should You Buy Gold-Plated and Vermeil Jewelry?

Knowing all this, we would hesitate to recommend gold-plated or vermeil jewelry. Apart from the issue of waste, the provenance of the raw gold used in such pieces is rarely stated on the product packaging — and there is no legislation that requires it, either.

Real gold will almost certainly repay itself through its hard-wearing nature. For people who can’t afford the steep initial outlay for gold pieces, other precious metals, like silver,  are still worth the investment. Silver, which for comparison is trading at around $0.83 per gram, or about 1% of the cost of gold, and it can be polished, cared for, worn every day, and still last for a lifetime.

It will be a while before mass-market jewelry can make such emphatic alterations as Ann. “The pieces I make can be passed on to the next generation,” she says. “Lots is being done now and the industry is slowly changing —  among the smaller independents it’s a big thing. The more that you get into it, the more you’re aware.”

The Most Beautiful, Ethical, and Eco-Friendly Fine Jewelry Brands

Where to Buy Sustainable Fabrics Online (with Low Minimums!)