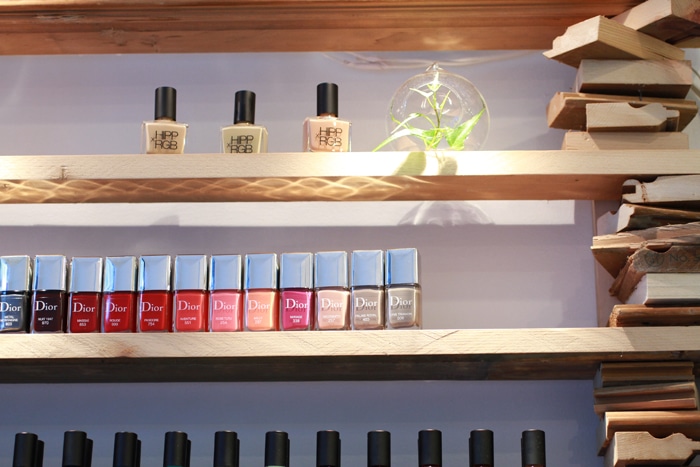 If you were to say, “Hey Alden, what would your dream nail salon look like?” I would say this:

Oh look, a nail salon just like my dream one just opened in Williamsburg! 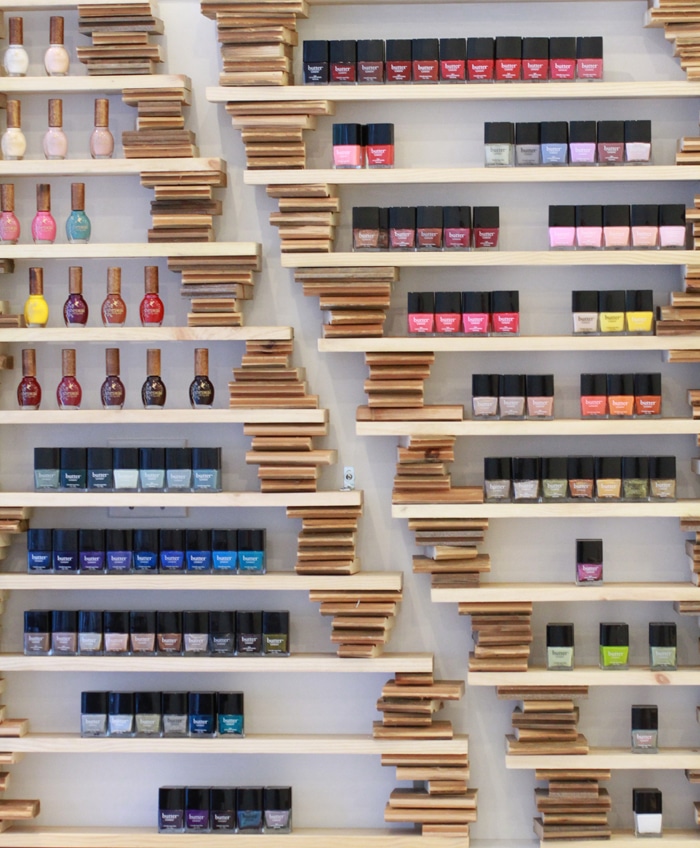 Yes ladies, you heard it from me first. With zero fanfare, a nail salon called PH7 Nail Couture opened its doors three blocks away from Momofuku Milk Bar smack in the middle of Williamsburg. When I discovered this, I immediately ran over to check it out and get a manicure.

Inside I found two, huge reclaimed wood shelves stocked with all my favorites: Sheswai, RGB, Dior, Butter London, Deborah Lippmann, and more. I settled into a comfy, upholstered chair and within ten minutes, a manicurist was soaking my feet in a tub. She moved quickly, trimming and filing with sterilized implements, then painting an orchid purple on my toenails. Then, I moved over to a reclaimed wood desk that I would gladly steal for my apartment, where she did a perfect and efficient job on my nails, topping it with quick dry in lieu of cancer-causing UV dryers. 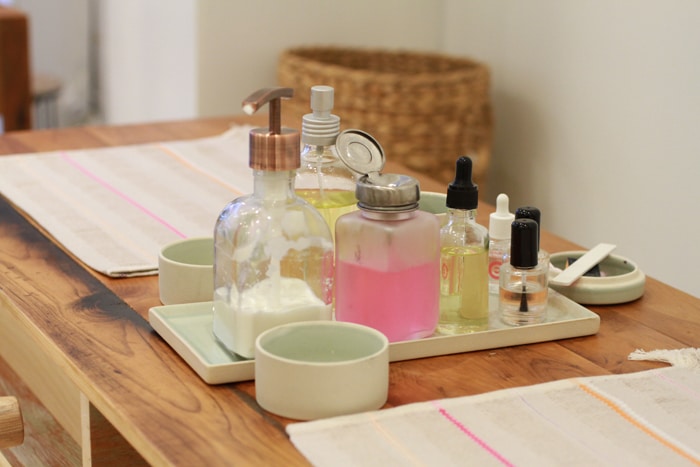 I left perfectly satisfied with my experience. It had the speed, familiarity and efficiency of a cheap salon in Murray Hill, with the non-toxic products of a luxury salon in TriBeCa, and the decor of a Greenpoint boutique.

Chinese sisters-in-law Ai Ke (who goes by Helen) and Do Huang (who goes by Cici) are the owners of this unexpected treasure. Helen used to work as a financial analyst. Cici worked as a consultant before becoming a manager at various Chinese nail salons around New York. 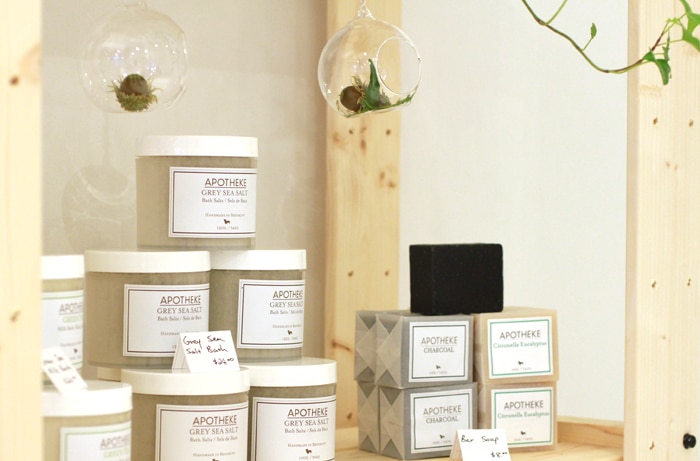 I talked with Cici in person, who designed most of the decor, and as of seven months ago is a new mom. “At the beginning of the pregnancy, I couldn’t do a manicure or pedicure,” she told me about why they chose to go non-toxic with this salon. “I was concerned for my health, eating organic and healthy food. And we didn’t like the smell in other salons.” (That’s what I call the “cancer smell.”)

A basic manicure and pedicure will run you $48. “Yes, the non-toxic polishes are more expensive, but I think it is well worth it,” Helen told me over email. But she says that if you ask a normal salon to use better nail polishes, it would be the same price. (And it is still way less expensive than Sweet Lily in Tribeca.) “We would love to be make it as cost friendly if we could, but that would come at the sacrifice of quality.” She concedes that non-toxic products can be a hard sell to people who don’t know the effects of conventional nail polishes, but, “Since I became more familiarized with the harmfulness of those products, I cannot and would not want to be exposed to them in the long term. We are going to continue searching for the next best alternative.”

(On a side note, I had a conversation just a few days ago with a friend whose mother was a manicurist … and died from pancreatic cancer. Ladies, this is serious.)

As for the lotions and nail polish removers? They use Apotheke lotions, scrubs and balms, which is made in Brooklyn from all natural ingredients. “For fall and winter seasons, we are in the process of switching to Panier de Sens, which is another all natural skincare company from Provence,” Helen told me. “The nail polish removers we use are acetone free, meaning they don’t smell as bad, plus don’t dry out nails and cuticles. We are also in the process of switching to Zoya’s quick dry drops from Essie.” They also offer waxing services with organic wax.

Cici designed most of the oh-so-Brooklyn decor (reclaimed wood, neutrals and greys, air plants), and was the person behind the decision to forgo the massage chairs. “They are hard for pregnant women to sit in. Low chairs make it easy for Mom to have her child nearby, too. Having worked in salons, I can tell you the traditional massage chair is not very clean.” Apparently, it’s very hard to properly clean the basin at the bottom. So the tubs are a nice alternative.

I asked them why they chose Williamsburg for their salon. “Williamsburg is the up-and-coming neighborhood,” Helen said, “There are a handful of decent nail salons, but none tailor to the more health conscious minded crowd, not to mention expecting mothers.”

But the reaction hasn’t been all good. “If I say we have 100% satisfied customers, that would be a lie. Different nails wear the same polish differently,” Helen said. “We have had some customers having difficulty with certain polish, and I am always grateful that they would come back and bring it to our attention. It allows us to learn more about the polish, address the issue and improve our services. Then we have customers who said the polish lasted two weeks, while being cheaper and healthier than gel. I cannot express how happy I was to hear that.”

So for now, they’re holding off on advertising and promoting, as they tweak their all-natural formula to perfection. But now you know it exists, so go, get your nails did, and give them feedback. (And tell them where you heard about it. 😉

My New Eco-Friendly Sunglasses by Woody