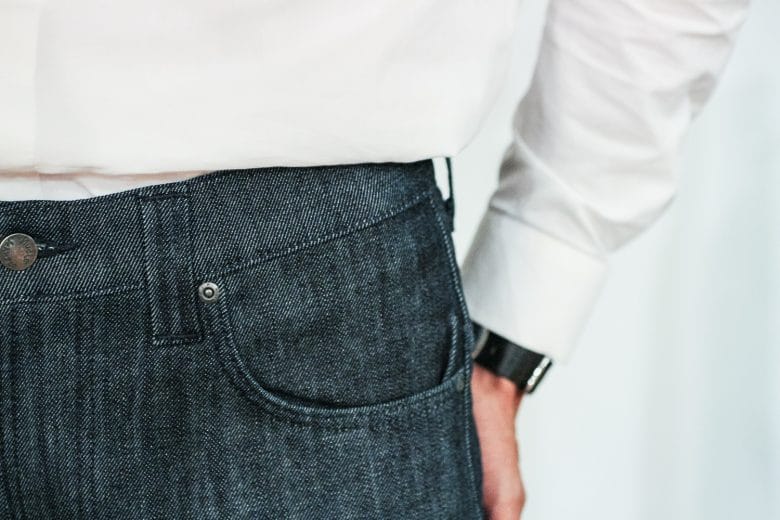 Nudie Jeans is recognized in the industry for making top-of-the-line denim for men with a rock n’ roll aesthetic at reasonable price points. But here’s a little secret:

Many of their styles are unisex.

When I was first told this by Ruari Mahon, Global Head Of Public Relations & Communications at Nudie, I was skeptical. I figured “unisex” meant that a certain type of cool girl with no butt or hips could pull of a boyfriend-style jean. I am not Man Repeller. I require fit. But when Mahon offered to let me and my fiancé come in for a fitting session*, I wasn’t going to turn that down, for Illich’s sake. Illich is 6’5″ and thinner than I am, and Nudie jeans, as I discovered a while back when I was researching jeans that would actually look good on him, is one of the few brands that make extra-tall jeans that are stylish enough for a Brooklyn DJ/architect.

Nudie is also an incredibly sustainable and ethical brand. This Swedish company has been a part of the Fair Wear Foundation, an independent, non-profit organization by trade organizations in the textile sector, trade unions, and NGO’s, since 2009. They manufacture in vertically integrated facilities in Italy and Tunisia. Fair Wear Foundation verifies that member companies implement a Code of Labour Practice along their supply chain and checks compliance by monitoring audits and remediation efforts. 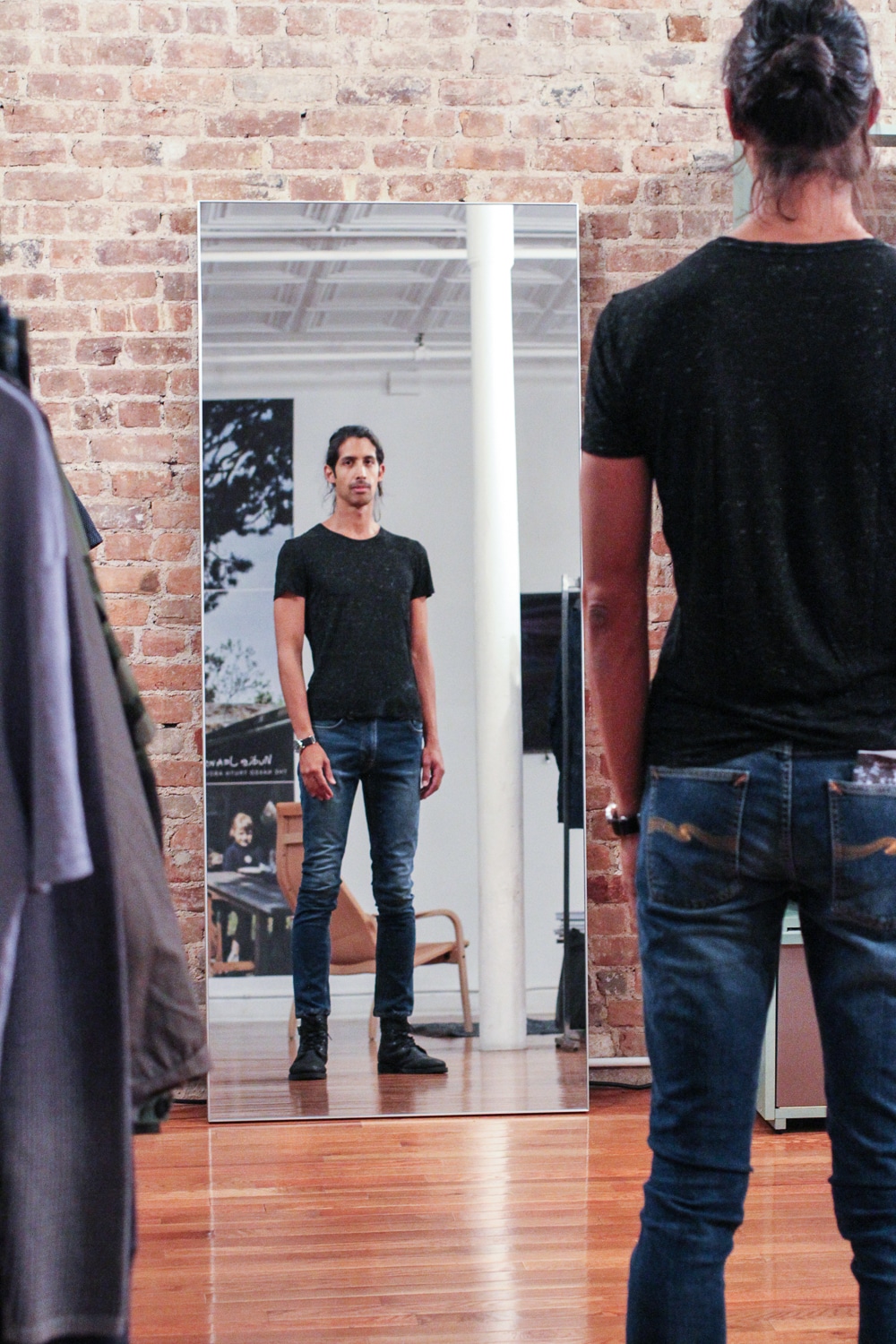 Just as importantly, the jeans have been made from 100% organic cotton since 2012. “Admittedly, our margins are smaller than what they were when we were using a percentage of organic cotton,” Mahon told me. “But when the brand started in 2001, one of the long-term goals was to have 100% organic cotton. It’s important and at the core of of what we do. You want to know that you’re wearing clothing that is produced with a consideration for the environment.”

(You can read more about why organic cotton is more expensive and the drawbacks of conventional cotton in my articles for Refinery29.)

Nudie is famously attentive to detail when it comes to fit and quality, and that extends to the impact of their jeans. The rivets are ungalvanized, which means they were not treated with toxic finishes like conventional rivets, and will, “age beautifully,” Mahon says. The dye they use is natural indigo, the real deal that traditional denim is dyed with, and the dye water is filtered the the point it is drinkable. The packaging is made from recycled material, and the back patch is made from castoff leather from a shoe manufacturer in Italy. They use high-gauge organic thread. Nudie even developed a non-toxic coating to give certain styles that sexy, shiny, rock n’ roll finish. Finally, Nudie offers free repairs for life in their stores, supporting your ability to wear the jeans until they literally fall to pieces years and years from when you purchase them. 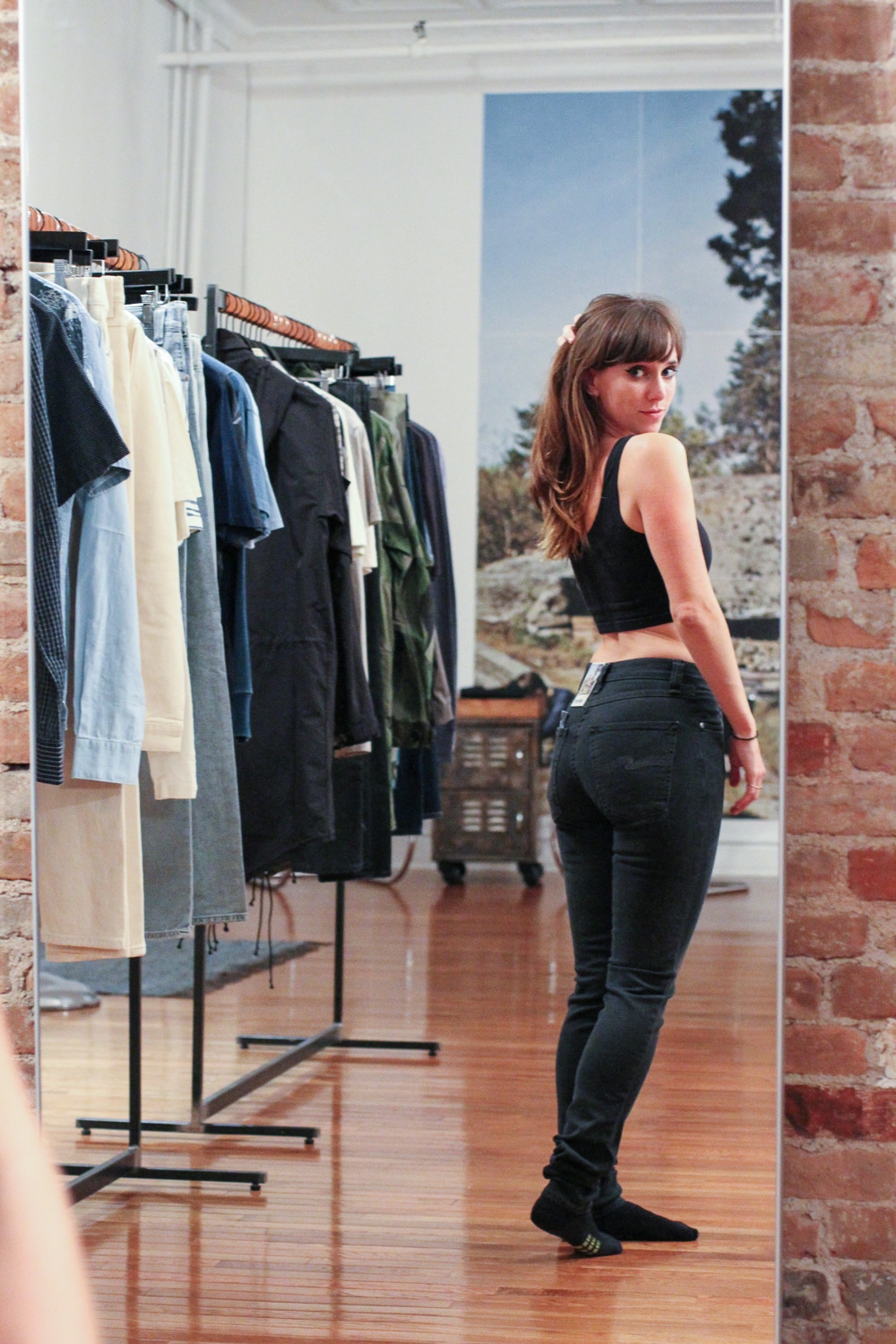 Nudie also specializes in selvage denim, which is denim made on the traditional looms. It usually doesn’t have stretch, though nowadays it can. You can tell selvage denim by turning up the hem to see the how the edge has a different color on the inside and a white trim. Selvage denim is a thing. “Selvedge is for real denim heads. It’s for denim enthusiasts that have a lot of enthusiasm for the process,” Mahon says. Nudie carries denim from Italy, Japan, and Turkey. Though American mills pioneered the process, Japanese selvage is recognized as the best, close to an art form.

“Japan is where selvedge is at,” Mahon says. “It’s like a lifestyle, it’s so current in Japan. It’s what we look to for our exclusive projects. You get heavier grades as well, like an 18-ounce jean we did in November that can practically stand on its own.” 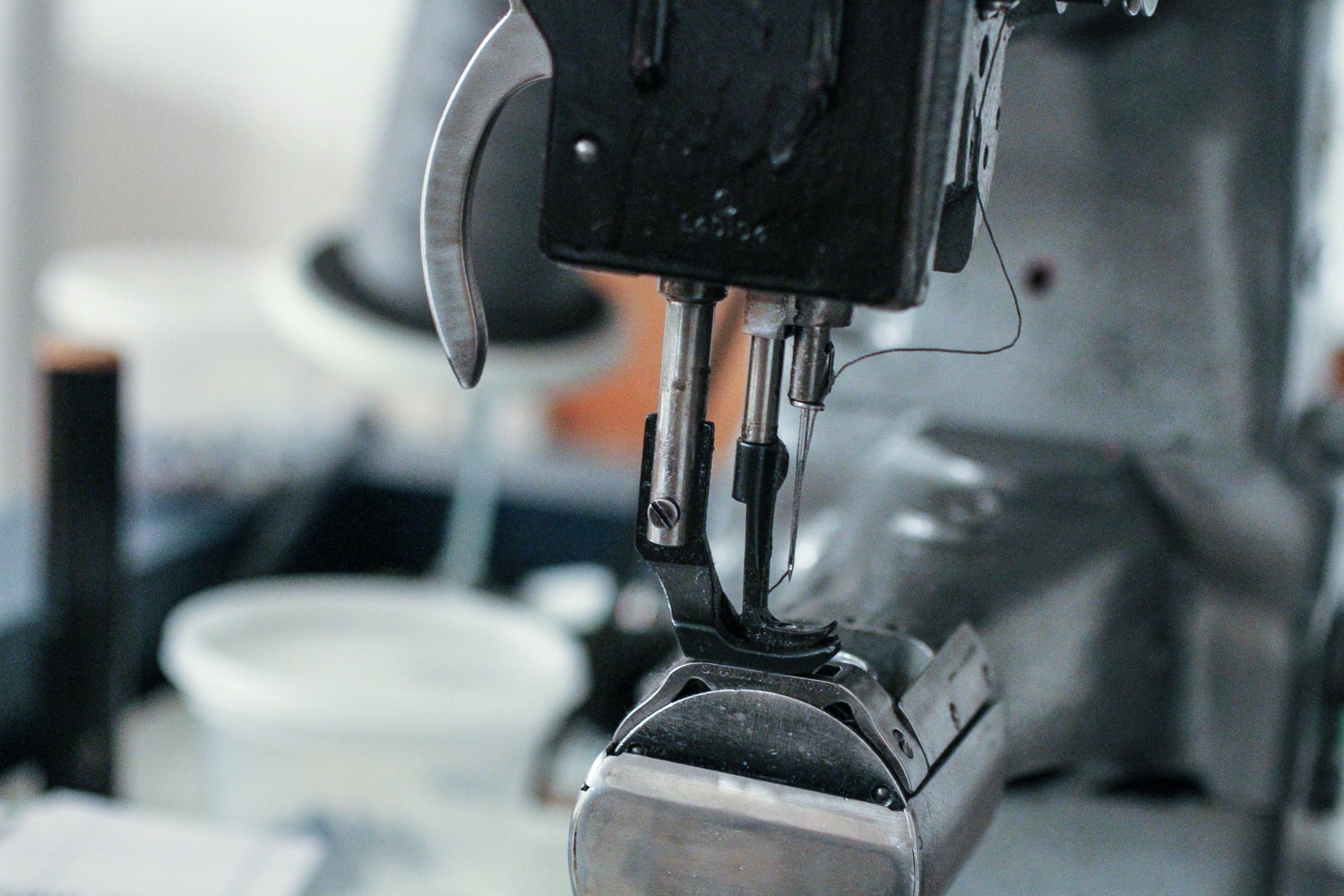 When we arrived on a weekday evening to the Nudie showroom, Ruari grabbed us some Peak Organic beers, asked us some questions to get a sense of what we were looking for, and then pulled jeans from the shelves for us to try. We changed in the large bathroom, which had a bathtub filled with tropical plants. (The Nudie showroom is in a former residential loft on Bowery.) 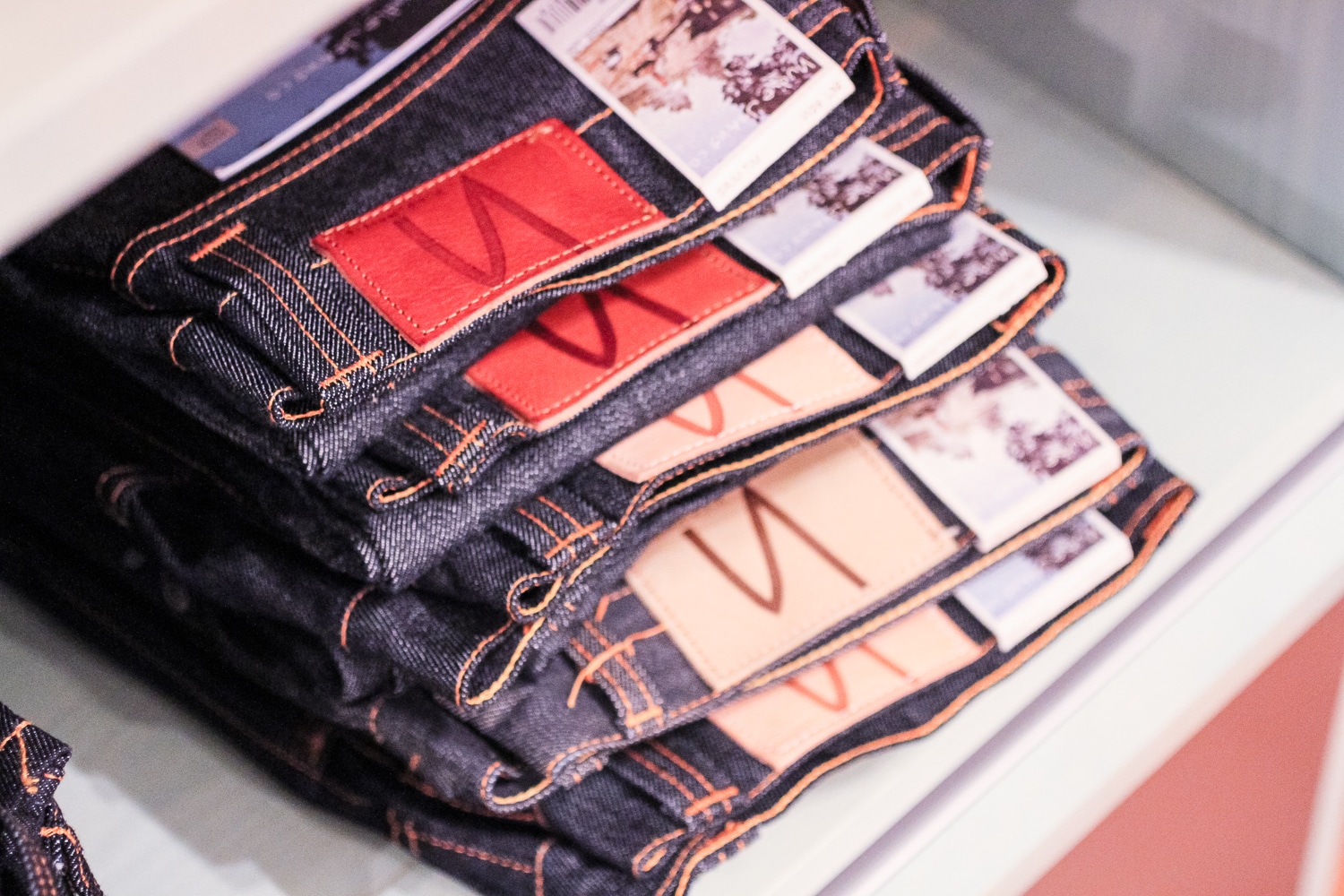 Illich quickly found a favorite pair of indigo selvage jean with just a slightly cropped length for a dapper look. The ones he is modeling here are a couple inches shorter than the length he settled on, though they look pretty great with boots!

I slipped into several pairs of jeans, looking for a light blue pair with a high waist. As I was modeling a pair in the mirror for myself, I turned around and caught Illich surreptitiously taking a picture of my butt. That’s when Ruari revealed that the jeans I was in were one of the unisex pairs. He showed me them on the site on a dude. Yep, very masculine. Yet on me, they stretched and hugged my curves as if they were made with a woman in mind. Magic. (If you want to see Nudie jeans on female models, try here.) 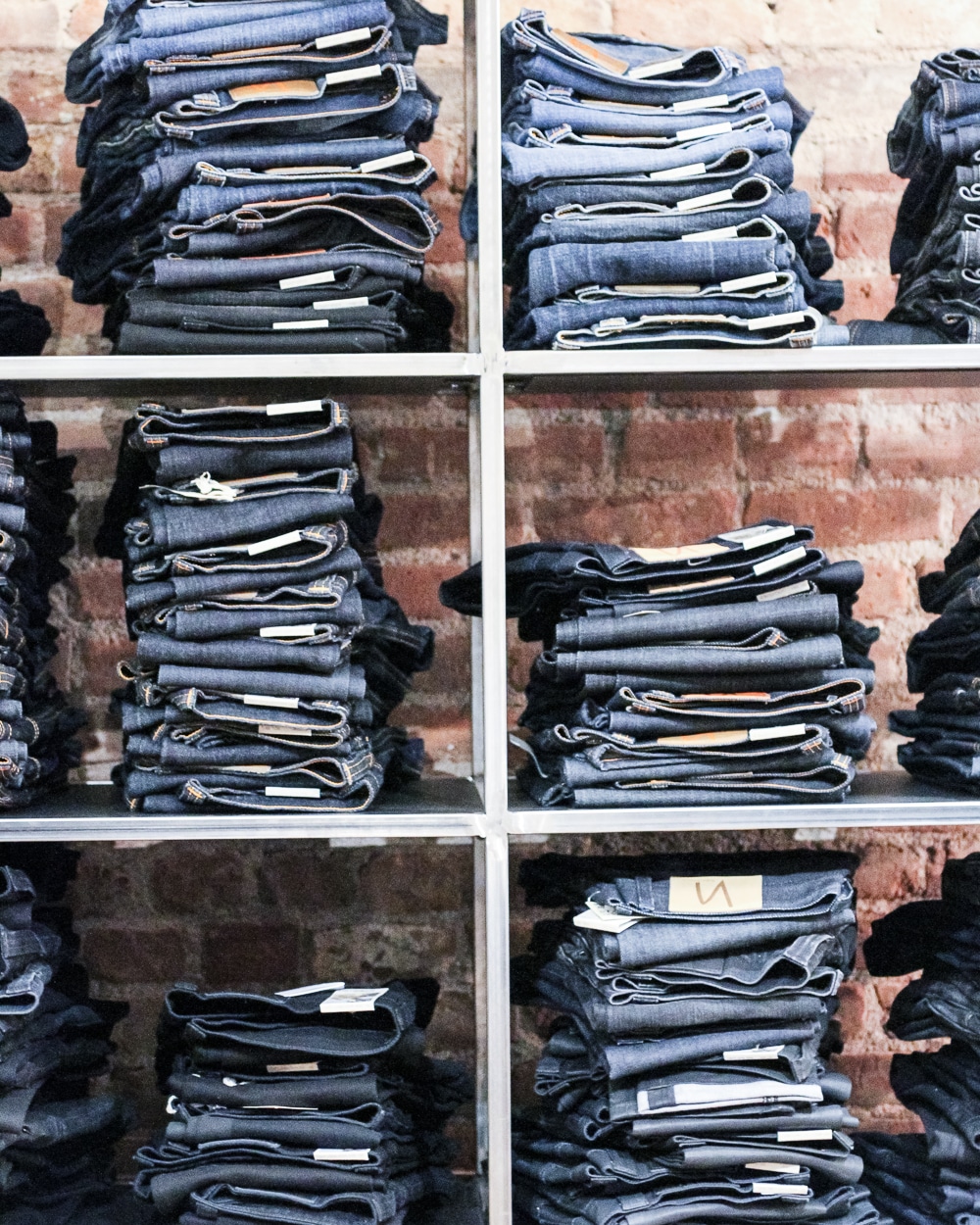 After we chose our preferred style and color, Ruari called in our orders to some stores, along with what length they should be hemmed to. They arrived a few dates later with minimal packaging. Illich immediately put his on and wore them to work with a jacket. I put my on on Saturday for a day of fall activities. They are soft and comfy – as close as you can get to sweatpants while still wearing organic denim. (I’ll be modeling them in an upcoming outfit post.)

And luckily for us and my NYC readers, Nudie Jeans will be opening their first NYC store sometime soon in Nolita, so you can go get your own fitting sesh and free repairs for life.

Hey, bring your dude, too. Mine certainly had a great time. And I consider it another step forward in my ongoing benevolent plot to turn him completely sustainable, from deodorant to jeans.

*We were each gifted a pair of jeans.

A New Place to Grab a Healthy(ish) Lunch in Union Square: V-Burger