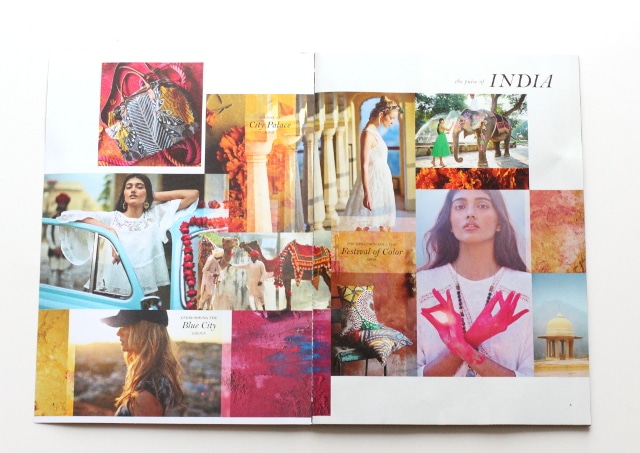 This post is by Catherine of Walking With Cake, a blog about family, home, fair fashion, and everything in between.

When Anthropologie’s latest catalog arrived in the mail, I spent a time perusing it Friday night. I’ve written about this brand in the past and even dissected their site to find ethical clothing options, which is the way I shop these days. I just can’t seem to completely let this brand go, and I’ve been excited and hopeful as they sometimes work with ethical and fair trade lines.

But this month’s catalog left a bad taste in my mouth from my first glimpse at the cover, and I can’t say I’m really surprised at all. The lookbook is beautiful and was photographed in India, as you can see from the picture above. It’s filled with pages and pages of clothing inspired by India, but I can’t tell if they are actually made there, since most things are labeled as “Imported.” I’ve shared my frustration about this issue in the past, and it doesn’t seem to have improved over time. As I glanced at the pages, I was struck by the irony of this artfully directed shoot in an exotic location, filled with clothing that was, in most cases, made in a completely different country.

Looking through the catalog, I found three brands that sounded, simply by their names, like they might be based in India. Two were husband and wife design teams, Pankaj & Nidhi and Deepa Gurnani. Pankaj & Nidhiis a successful clothing brand based in India, so you can assume their clothing is made there, though it’s possible it’s not. But there’s no mention of production methods on their site. The second, Deepa Gurnani, is a line of jewelry inspired by India, but again, there’s no mention of production practices. To be completely fair, both lines may have completely above-the-board production methods, but offer no transparency.

The third brand really made me raise an eyebrow, when I discovered that Jasper & Jeera, a line of leather bags and accessories, is actually a trademark owned by Urban Outfitters, who in turn owns Anthropologie. There isn’t an actual site for Jasper & Jeera products, since it appears Anthropologie either designs or purchases the items and attaches a Jasper & Jeera label. According to Anthropologie’s site, “A trip around the globe surely will not yield as many handcrafted, artisanal finds as are designed by Jasper & Jeera each season. With an eye for the offbeat and the hand-touched, each piece showcases beading, embroidery and printing to the worldliest degree.” But seriously, what does that even mean?

According to this Mother Jones article, India is the third largest garment exporter in the world, after China and the European Union. While there are fair trade and artisan groups growing within the country, there are still many people working in unsafe and inhumane conditions within garment factories. Are these workers, many of whom are essentially slaves, producing clothing sold by Anthropologie, and if so, what does the company plan to do about it? Simply sweeping the issue under the rug, or in this case, distracting consumers with an Indian-sounding name owned by an American company, does nothing.

If these items are indeed made in India, why doesn’t Anthropologie just say so in the catalog? They clearly label items made in Spain or the United States, so what’s wrong with actually labeling a product’s country of origin, instead of the vague “Imported” description? It’s 2015, and customers are beginning to expect transparency within their favorite brands, so it’s definitely time for Anthropologie to jump on that bandwagon. Obviously, they understand the handmade, artisanal look their customers want, but without an explanation of the products’ origins, Anthropologie isn’t offering us the full package and is, in reality, misleading us.