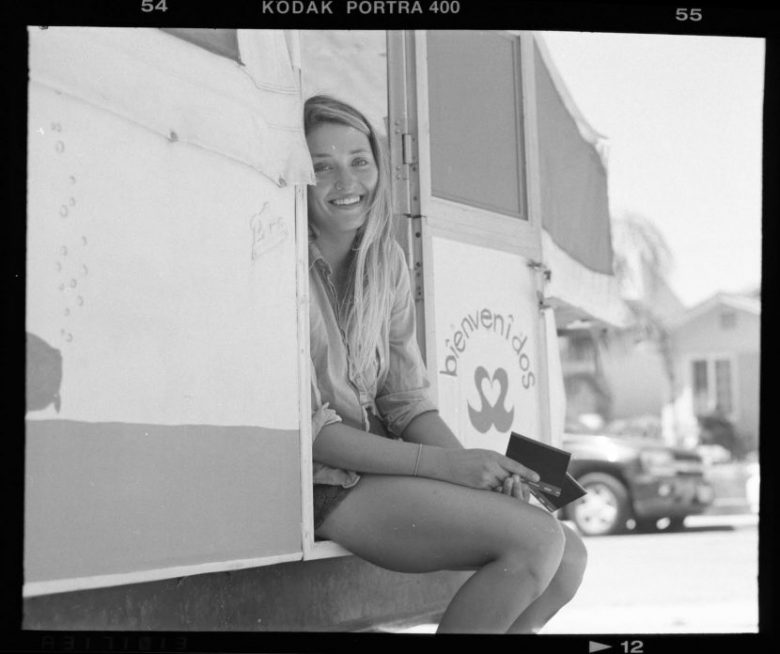 This post was first published on Kiss That World, a blog that helps you simplify your life, save the polar bears, and be a happier version of yourself.

A few years ago, coinciding with some big life changes (job, relationship, etc) I decided to move into a 1970 pop up tent trailer. I bought it from a friend who bought it on craigslist site unseen for $200. She lived there for 3 months with her manpanion and 2 cats before taking off to South Korea.

At this point, I wanted to live on my own. I had never lived without roommates or boyfriends or roommates boyfriends and this was a right of passage. However, living in Southern California with its astronomical rents and making only $13 an hour at my full-time job made that reality difficult. I bought the trailer, made a power point presentation and convinced a friend of a friend to let me live in his front yard.

What it’s Actually Like to Live in a Tiny Home 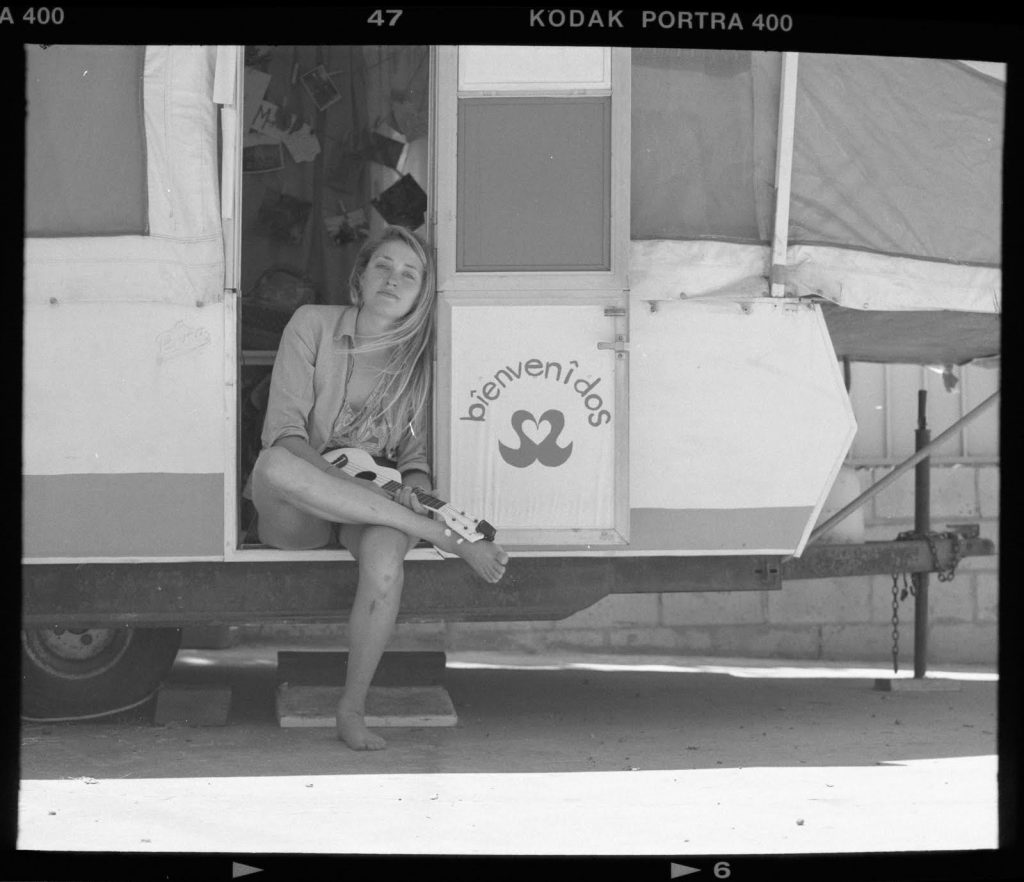 And just like that, I was a home owner! She definitely was not perfect, but she was mine! The standing space was 6 feet long and there were two slides that went out 3 feet in either direction. One was my bed, the other served as my closet. There was a kitchen table that I used as a desk and drawers that I used for socks, undies, and tea. I lived in the yard for just over a year.

There were a propane tank and a stove top but I mostly just went inside the house to cook. I was an indoor outdoor cat- I used the kitchen, and shower indoors and the laundry in the back yard. I would come in mornings and sit with my roommate while we got ready for work.

There was a power cord from the house into my trailer which I used to for a lamp, small radio, phone charger, Italian string lights (ya, it was as dreamy as it sounds), my laptop, an electric kettle for tea and coffee and my oh so important space heater/fan.

I look back so fondly on the time I lived in the trailer. It was loud at night- my neighbors had a habit of blaring mariachi music at all hours. I had to pee outside in the middle of the night (or I chose to, because finding my house key seemed like too many steps). It was cold in the winter nights and hot as hell during the summer days.

During that time I threw a tarp over the top because despite being in the middle of a record-setting drought it still rained. I also didn’t want the neighbors to know that I was living in it. The support beams were less than sturdy so I had wood cut to size and stuffed it between the roof and the top of the wall. The canvas had been redone at some point and shrunk so there was a flap that didn’t snap shut- this served as my cat door.

Once, on Halloween, my roof leaked so badly that it flooded the floors, sagged the ceiling and ruined my mattress. But homeowners do repairs- so after a teeny breakdown I upgraded my foam, concocted a strange patch job for they ceiling and I was back in business.
When you live in such a small space it gets real cluttered real quick.

The kitschy, campy vibe I was aiming for often turned into a tornado after one night of coming home from the bar and throwing my clothes everywhere. For the first time in my life, I wanted to keep my space consistently clean. And it only took an hour to deep clean the whole thing so it wasn’t too hard to do.

Having very little room also means that everything in there better be important.

I loved everything I owned. I used bad ass old suitcases from the thrift store as clothes storage, photos and letters around, a cactus and beautiful curtains.

Since my space was limited I was able to buy higher quality than I was used to. I only needed two curtains so I could buy the ones I loved. I had to look at everything I owned pretty much all of the time so I wanted to make it cool.

Having your bed also be the only spot you can recline in and your kitchen table the only place to sit (other than the small runway of a floor) meant I spent a lot of time outside. I would bike to the beach, walk the path next to my house and paint on the lawn under the orange tree. I spent a lot of time in parks, and I did a lot more surfing too.

Every morning felt like a vacation. Waking up to all of the singing birds, looking around at my mobile home I would imagine that I was anywhere in the world. Then I would stumble out of bed, pulling clothes on as quickly as I could- it was always freezing outside the safety of my mattress. And back to reality…

The evenings were a little less than peaceful even though I was at the last house on a dead-end street. My neighbors were not the early to bed early to rise type like myself. I had to be up and out the door by 6 am so I was in bed early. They all had late night mariachi habits. On weekends there were parties and for some reason living on a dead end, street attracted people to park out front and do strange things. Domestic disputes, late night rap battles to Eminem, throwing up on our curb after a night out… I really got to know the people. 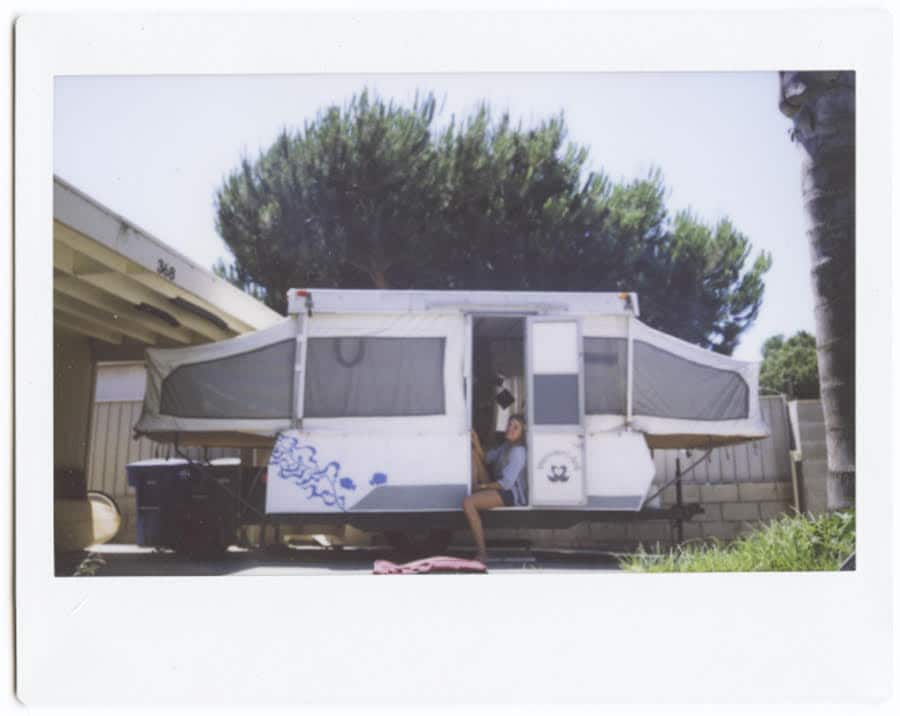 Eventually, my small space became shared with my cat. And after that, a boy.  A cozy, perfect spot for one turned out very cramped for three. Especially since one of us could not stand up at full height… That and someone shot my neighbor in the arm in a gang-related incident, meant it was again time to move.

I was originally scared that living in a trailer/van/mobile home as a single woman would be scary. After conquering it I say that I was no more afraid in my trailer than I am alone anywhere else. My housemates always had my back and the late partying neighbors were actually pretty nice. Today, I have sold the trailer to another single woman in need of a home. I am trying to maintain the things I learned were important when I was a trailer park girl. Go outside. Own what you need. Love where you live. Keep it clean.

This post was first published on Kiss That World, a blog that helps you simplify your life, save the polar bears, and be a happier version of yourself.

6 Tips for Living Sustainably and Harmoniously With Your Partner