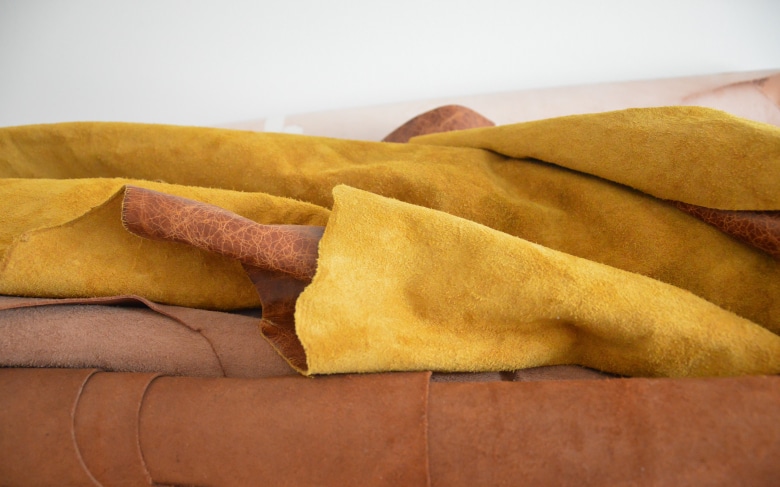 Using leather for clothing originated over 100 thousand years ago when primitive people turned animal hides into a longer-lasting and suppler material using various natural substances, such as oils and animal fats, animal dung and urine, and, later, vegetables and plants, in a process called tanning. They crafted the first biodegradable leather fashions — shoes, headwear, gloves, belts — with this organic process.

Back then, however, ancient folks didn’t worry about how long it took leather to decompose. They just needed items that would last long enough to serve them in their short, brutal lives.

But since then things have changed in three major ways: The tanning process is now mechanized and less artisanal, with lower-paid workers and more toxic effluent. We’re making so much of it that it’s piling up. And our planet is also more fragile and vulnerable than ever to these toxins and waste.

Consumers concerned about the environment want to know: Is leather we buy today biodegradable?

The Impact of Modern Technology on Leather Tanning

In the 19th century, tanning took a modern turn. Leather began to be processed not by skilled workers but by mechanization using unskilled labor, and tanning evolved from using vegetable tannins to minerals, specifically chromium salt. These changes led to a quicker and cheaper tanning process, which was a boon for the leather industry. Instead of the months it took for vegetable tanning, processing animal hides using chromium took less than a day. In addition, the resulting leather was found to be more stretchable and have greater water resistance. It’s estimated that up to 90% of leather today is produced using chromium.

What was gained, however, in terms of less time and better leather qualities, may be outweighed by chromium’s negative impacts. Chromium is a heavy metal that occurs in two forms — trivalent (chromium III) and hexavalent (chromium VI) — and can be toxic both to human health and the environment. In vitro studies have shown that chromium (III), which is the form used in leather tanning, is genotoxic, causing genetic mutations in cells. Chromium (VI), while not used to treat leather, can form as a residue on leather products when chromium (III) oxidizes under specific conditions, and is known to cause lung cancer and other adverse health effects in workers exposed to it in such industries as electroplating and stainless steel production. Left untreated, the chromium-infused water from tanneries can contaminate nearby rivers, causing serious skin and respiratory irritation in people and animals who rely on that water.

There’s also solid waste produced during the chromium-based tanning process, including leather shavings and trimmings. When dumped into landfills, this waste causes huge environmental problems, such as soil and water contamination.

How Fast Leather Breaks Down

Although an enormous number of leather products have been treated with chromium, that’s not to say that they won’t ever decompose.

According to Dr. Ellie Banwell, a freelance consultant with degrees in biomedicine, biochemistry, and innovation design engineering, “Decomposition is not binary. It’s never a case of, materials either decompose completely or they don’t break down at all. Everything is really a question of how long it takes. All decomposition is eating, and all decay of natural materials is digestion, usually by microbes and insects.”

Inge Flowers, Managing Director of Authenticae, an independent laboratory that offers testing services to producers of leather and alternative materials to determine their biodegradability, compostability, and impact on the ecosystem, agrees that all leather is biodegradable — the variable is time.

The goal of tanning, whether by vegetable-based or chromium-based methods, is to preserve the leather. Without tanning, says Banwell, a piece of leather would begin to rot and stink within a half-day. Treated leather clearly takes longer to reach that point, but estimating the time until it biodegrades depends on many variables, such as how it’s tanned, what kind of finish is on the leather (like a thick plastic film, for example), and how it’s being composted, among other things, according to Flowers.

Most leathers can be expected to degrade within 10 to 12 months in industrial composting conditions, says Flowers. The process of biodegradability will quicken, however, with direct exposure to the sun’s ultraviolet light, and even more so if the environment is rich in moisture and warmth, explains Banwell. Decomposition can also be enhanced by erosion from wind or water.

Moreover, depending on the tanning “recipe,” says Flowers, some leather pieces will take longer to biodegrade. Many shoe leathers are treated to be waterproof or water-resistant, but the process of composting relies on water being able to infiltrate the fibers of the leather. And while vegetable-tanned leather can be slow to biodegrade. When it does, it can often make the plants in the surrounding ecosystem healthier, Flowers says.

According to an Organization for Economic Cooperation and Development (OECD) Guideline, a compound is considered to be “readily biodegradable” if more than 70% of it is converted to carbon dioxide, water, and minerals within 10 days of a 28-day composting test. One study out of Italy attempted to determine the biodegradability of leather samples tanned in different ways. It showed that, after about 10 weeks under controlled composting conditions, leather that had been tanned using organic substances was nearly twice as decomposed as leather tanned with chromium. The study concluded, however, that no samples reached the minimum level of biodegradation within the times set by the OECD reference standard to be considered “readily biodegradable.”

While policy makers may consider biodegradability that isn’t complete after 10 weeks to be insufficient, it’s certainly better than plastic, which can take more than 400 years to decompose.

The Future of Leather Biodegradability

Alternative techniques for processing leather, vegan materials that mimic the qualities of leather, and innovative ways to lessen the environmental impact of chromium-based leather tanning are all either currently available or being researched.

One alternative to chromium is zeolite, a natural mineral created when volcanic ash mixes with alkaline water. Launched in 2020 by the tanner Nera under the brand name Zeology, the process is not only chromium-free, but is also touted as producing less pollution and chemical waste, while improving the biodegradability of the tanned leather. Two sneaker manufacturers, Puma and Tophide, are piloting its use in their products.

There’s also a wide variety of vegan leather alternatives, whose source materials range from pineapple trees (Piñatex), to cork, mushrooms, teak leaves, and cacti (Desserto). And more are in the pipeline. While most are not compostable yet because of the synthetic binders, there may be certified compostable purses on the way, if one brand’s press release is to be believed.

Research has also focused on how to mitigate the effects of chromium-tanned leather on the environment. For example, scrap waste produced during the tanning process can be treated with various substances to remove chromium and/or turn the scraps into materials for other industries. Applying alkalis to shavings can create products for fertilizers and agricultural packaging, while acid treatment of shavings can dissolve the chromium. The fibrous nature of waste leather means it can potentially be used as an additive for plastic or rubber composites, or even a heating source.

Flowers says that fungi are now being studied in bioremediation, by pulling the chromium out of leather shavings. Untreated chromium is toxic to the environment and to people, but it’s also a valuable metal and, if it’s drawn out of leather scraps, can be reused in making stainless steel cutlery.

This is all in the future, however. Ultimately, the best leather is that which lasts just long enough. “We need some form of tanning to make hide usable, but we need to develop more nuance around the longevity we’re aiming for,” says Banwell. “Do we need a tanning method that works for thousands of years, or is 100 enough? “

While making leather less toxic while it’s slowly biodegrading is a worthwhile goal, as consumers of this extremely durable material, we would do well to follow a few guidelines: Purchase artisanal, vegetable-tanned leather items whenever possible; have leather items repaired rather than tossing them; and shop secondhand.

Leather has more longevity than biodegradability, so keeping it out of the landfill is the best course of action — for us and the planet.

The Coziest and Most Comfortable Sustainable & Ethical Underwear Brands