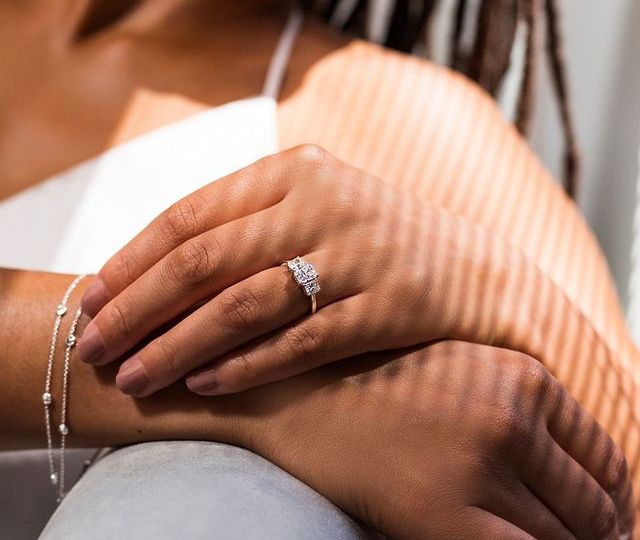 Photo credit: MiaDonna, a certified B Corporation that makes lab grown diamonds in the US.

The diamond industry has been rife with controversy for decades, both humanitarian and environmental. Recently, there has been a growing hype around lab-grown diamonds, which many see as a more ethical and environmentally conscious alternative to traditionally mined diamonds. The brands producing them certainly market them that way.

But is this sparkly solution too good to be true? We did some digging to find out.

First up, what exactly is a lab-grown diamond?

There are two methods used to create diamonds in labs: high-pressure, high-temperature (HPHT) and chemical vapor deposition (CVD). For HPHT, the diamond is engineered from graphite, using machines that generate extreme pressure or heat, replicating conditions in which naturally formed diamonds were created. CVD, on the other hand, is a method of growing a solid diamond from a hydrocarbon gas mixture on a substrate material.

Physically, the resulting synthetic diamond is nearly identical to a mined diamond, and you definitely won’t be able to differentiate it just by looking at it.

When comparing the environmental impact of lab grown versus mined diamonds, both the total amount of energy needed as well as the kind of energy used are important factors to consider. For example, a lab may have a high energy usage to produce a diamond, but if that energy comes from clean, renewable sources, it could still be a better option than a mine that uses oil to power its activities.

“Diamond mining typically requires diesel for the trucks and other equipment. Power is also required for the processing plant,” says industry analyst Paul Zimnisky. “Lab-diamond production can consume very significant amounts of energy, as in some cases the growth chamber has to be heated to the temperature of the sun. The process can also require gases such as methane, nitrogen, and boron.”

Energy and fuel usage varies widely among synthetic diamond labs and mines. According to a 2016 paper by Saleem H. Ali, Professor of Energy and the Environment at the University of Delaware, the Argyle mine in Western Australia has a fuel usage of 4.2 pounds per carat, and the Diavik mine in remote northern Canada uses 11.5 pounds per carat created by diesel generators.

However, Ali cautioned in his paper that we shouldn’t take these numbers at face value. For proprietary reasons, diamond producers don’t always disclose the materials they use to make the synthetic diamonds. And this matters a lot. If relatively abundant metals like iron and copper are used for production, the environmental impact will be significantly lower than if the production process uses rare earth metals.

Similarly, when it comes to chemical usage, there’s no way to really know what exactly is going into those lab-grown diamonds, and how those chemicals are being disposed of, unless the company decides to release that information.

On the other hand, “Chemicals are not typically used in diamond mining and recovery, as the process typically just consists of crushing the rock until the diamonds are liberated. Diamond mining is considered one of the cleanest forms of mining, but it does require water to ‘wash’ debris when liberating the diamonds,” says Zimnisky.

Looking at the whole picture

When discussing sustainability, we can’t stop at facts and figures related to environmental impact. The societal, economic, and humanitarian impacts on local communities are equally important factors to consider, and certain mines (if managed well) provide strong benefits to these communities.

“We work with artisanal diamond mining communities to support their empowerment and diamond mining is an important source of income for these communities and producer nations,” says Zuzia Danielski, Communications Director at IMPACT, a non-profit working to manage the sourcing of natural resources in areas of conflict. “Lab-grown diamonds are diverting important income away from developing communities. Our work is to ensure natural resources, like diamonds, can support sustainable development in producing countries and artisanal mining communities.”

In “The Diamonds of Botswana,” the third part of “Fashionscapes,” a docu-series exploring the fashion supply chains, Livia Firth talked to people working in the diamond mining industry in Botswana and found that the diamond industry provided many opportunities to the locals, whether it was employment, education, or access to technology.

“We were the poorest country in Africa, and diamonds were discovered just after independence. And the structures that were put in place at that time have benefitted Botswana going forward,” Naseem Lahri, the Managing Director of Lucara Botswana, told Firth. “I was born in Botswana, I’ve schooled in Botswana, and I’ve gone to University in Botswana, and it’s all because of the diamonds that have created the schools that I’ve schooled at, and even the employment right.”

“In Botswana, what happens is that all government revenues from minerals are put into a central pool and then it’s used for the development of the country,” says Susanne Swaniker, CFO of Global Sightholder Sales at the De Beers Group. She acknowledges that the diamonds aren’t a renewable resource and some point the mines will run dry. That’s why, according to her, it’s key for the government to use the revenue from the industry smartly, and invest it in development to create other sustainable industries that will continue to sustain the economy even after the diamond mines are tapped out.

“The socio-economic empowerment that’s happening as a result of diamonds in Botswana is a test of what can be done,” says Pat Dambe, vice president of corporate affairs and government relations at the De Beers Group. “I’m a product of the diamond industry. Everybody that you meet in Botswana is a product of it because it’s been our heart and soul. It took us from being the third poorest country in Africa to being probably the most successful medium-sized economies.”

Of course, this isn’t always the case. There have been several instances where diamond mining has been destructive to local communities and people. For example, a study by the Kimberley Process Civil Society Coalition examined the impact of diamond mining on nearby communities in Lesotho in Southern Africa and found shockingly high levels of nitrate in water sources for communities in surrounding villages, as well as a lack of employment opportunities and environmental pollution. Another study by the same coalition found that 133 children under the age of 15 were working across 13 mining cites in Boda, and another 15 each in Berberati and Nola in the Central African Republic.

One of the main responses to the outcry against blood diamonds was the Kimberley Process, which aims to eradicate conflict diamonds from the global supply chain. However, the key here is to understand how it defines conflict diamonds: “rough diamonds used to finance wars against governments.”

“A Kimberly Process certificate (just) means that a diamond was not a source of profit for a rebel group overthrowing a legitimate government,” says Zimnisky.

It doesn’t get into other impacts of diamond production, including worker conditions and environmental impact. So while it’s a good benchmark to avoid diamonds that are used to fund rebel groups, it doesn’t tell us much more beyond that.

It All Comes Down to Transparency

Unfortunately, there is no hard-and-fast rule when it comes to choosing between lab versus mined diamonds. As in most things in fashion, it’s less about the material and more about transparency.

“In my opinion, right now at least, the lab-diamond industry is much less transparent than the natural diamond industry,” says Zimnisky. “There is a lot of “greenwashing” by many lab-diamond companies, which is why, again, this needs to be taken on a case by case basis.”

So theoretically, while a lab-grown diamond could have a lower environmental impact than a mined one if created under optimal conditions, we have to take claims made by brands with a grain of salt.

Additionally, and this is the surprising one, mined diamonds (when mined responsibly), provide significant benefits for the local communities. If stopped, the livelihoods of these communities could be lost.

“Our view is that the industry needs to support the conditions for traceability and due diligence so that consumers can have confidence in the choice they make if they are buying a mined diamond,” says IMPACT’s Danielski.

Bottom line: Do your research. Mined or synthetic, your jeweler should be able to tell you the journey of the diamond all the way from where and how it was mined or created, to how the jewelery was produced and sold.

“I would argue that a recycled (repurposed or second-hand) diamond has the lowest environmental impact of all – and this does not typically come up in this conversation,” concludes Zimnisky.

We tend to agree.

Beyond Organic: Brands That Use Traceable Cotton and Support Regenerative Cotton Farmers