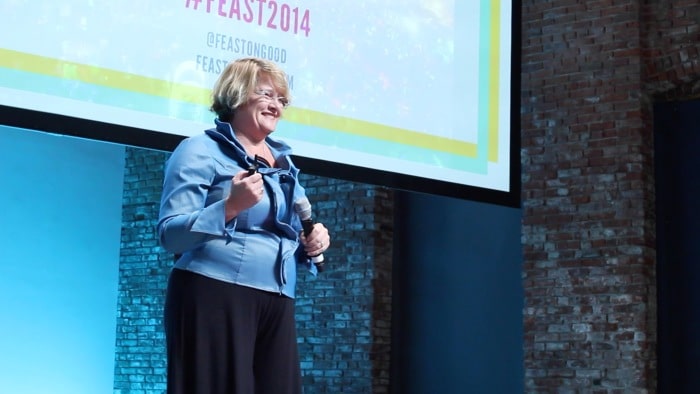 Recently I had the opportunity to hob knob with a diversity of interesting and smart people at a conference–though the word conference makes it sound much fustier than it is–called The Feast. Held at the art collective Pioneer Works in Red Hook, it showcased talk after talk on creative topics and ideas, stitched together with sustainable snacks and food options, organic drinks, and a party at the end called Feast Fest.

I was given the opportunity to interview some of the speakers, and of course chose to have a conversation with Harley Dubois, a cofounder of Burning Man, the largest Leave No Trace event in the world.

Dubois seemed over it when she emerged from the makeshift green room, but when was told by her PR person I wanted to talk about sustainability, visibly perked up. What follows is an almost completely unedited transcript (except for where it eliminates redundancies and serves clarity) of our conversation:

As someone who is very much into sustainability, I was really impressed with walking around what some people consider–at least part of it–a giant music festival, and not seeing trash. And not seeing trash despite there not being an infrastructure with trash cans and everything to collect that trash. What do you think it is about Burning Man that gets people to the idea of cleaning up after themselves, from the large things to the very tiny things?

Lots of hard work. We’ve been talking about leave no trace since 1997. When we were on private land we had to cut a road through sagebrush to get to the property. And we realized when we did that that we had disrupted a very delicate ecosystem. When you’re coming off the playa, there’s nothing that can grow anything. And as you get further away, sparks of growth start to happen. And it takes thousands of years, actually, to be able to sustain it like that. We realized we had blown it. So we went and bought the seed and reseeded it. But you can still see that road, even though that was in 1997. So it heightened our awareness of the kind of impact that we could have.

And then we saw that we had burn scars. So I became a Leave No Trace master trainer with a few other people, and would head out there every weekend–this was actually before GPS had been descrambled, so you couldn’t get exactly to the spots–but we would GPS all the spots on the playa and we tried all these methods of getting rid of them until we finally found the one that works.

And then we became proactive moving forward. The first thing we did was get burn blankets. But those were a lot of money for us at the time, and the burn for the Man was too big and burned through it.  Then we started using degenerated granite and putting that underneath every structure. So it looks like the Playa. Nobody knows it’s there. But we actually sweep it up and take it with us afterward.

Ah, because I remember looking at these burning structures and thinking, I thought you weren’t allowed to burn anything on the Playa …?

All DG. If there’s not DG underneath it, you can’t burn it. So we’ve been working on it for a super, super, super long time. We have a group called the Earth Guardians that they named themselves back in 1997. We would take people on Leave No Trace trainings. In order to be placed there, you have to do two to three things: you have to be interactive on some level–we don’t care how–but you have to show that you’re interactive; you have to fill out your form on time; and you have to show your cleanup plan. If you don’t give us a cleanup plan, we’re not going to place you.

We’ve used public embarrassment. Now we have a moop map, where we rate things from red to green. If you’re red, you might not get placed next year. So we’ve used all the small tools we have to teach and educate, and now people teach each other. But it wasn’t easy.

I was at the Earth Guardian tent and there was a grizzly old Earth Guardian. He was looking at the Playa, and it had been really wrecked by the rain, and people walking around. And he said that 70,000 people is too much. So my question is: Do you think there’s going to be a point where you’re going to have to cap the number of people coming into Burning Man in order to preserve that ethos of Leave No Trace?

No. 70,000 people isn’t too much. We’re already capped. He’s probably just a surly old guy. I probably know who he is.

Actually, that Playa is extremely resilient. We did our research, and it can withstand 500,000 people, because it’s a lake. As long as we pick everything up, nothing is going to grow. It’s going to get petrified, and it turns into a lake in the wintertime, and then when it dries we go and clean it again. It’s really self-generating. Even the deep footsteps, from people walking or people driving on the playa, will go away over time. So unless it stops raining–which is a possibility, we can’t control what is going on with our environment these days–as long is there is water it will regenerate. It’s the stuff we leave behind that matters. As long as we pick it up, it doesn’t really matter how many people are there.

Black Rock City is very contained. There’s a Leave No Trace ethos within the city, but there’s the energy needs to support it that come from outside. For example: generators, which run on gas. And I know that there is Black Rock Solar. But do organizers have a plan to reduce outside energy usage that has to be brought into Black Rock City in order to power it?

We’ve experimented over the years. Particularly in the Green Man year, we tried to run biodiesel, and the technology is not quite there. We would have to raise ticket prices in order to support that kind of thing. So what we do instead is try to educate.

So here you didn’t bring glass, and here you smashed your own cans to be able to give them to the local high schools so they can buy uniforms and computers–

Oh, that’s where the cans went.

Yeah. Here you learn to catch that thing that is blowing away in the wind. So go home and learn to do better. We make it an educational opportunity to do best practices, because here we can’t do best practices. We try wherever we can. Solar power is proliferating out there. But biodiesel isn’t where it needs to be yet. We want to do it. I’m sure the technology will be there someday.

There are certain moop things that are really tenacious, like fake eyelashes, the bellydancing discs, and feathers. But they’re also very closely associated with the fashion of Burning Man. Is that frustrating for you guys?

It is, but it’s life. I was a newbie once too. And I have to remember that. We have to remind our crews that once they weren’t perfect either. And we just continue to try to educate. We really, really push no feathers. And we got so bad that we were kind of militaristic and not nice about it. [Editor’s note: I did hear a rumor that if they found feathers in your RV they would confiscate them …] And we realized you can’t go too far with these things. You have to find a balance. And the community takes care of itself a lot. I’m sure whoever is wearing those feathers heard about it. And may have not come back with them last year.

All my friends wanted me to ask you about turn key or plug-and-play camps. They’re obviously something that exploded in the media this year. I personally didn’t come across them but it’s something the outside world heard about. And a lot of people were talking about at the event, and asking me about it when I got back. Do you guys have a plan, or is it like what you were talking about with the moop, where you can’t be too militaristic?

So we’re in the middle of the dialogue, and it’s gotten to an awkward phase. It could be the thing that destroys us. It could. I’ve seen other things that seemed really bad at the time that we got through because of education. Leave No Trace is one of them, actually–garbage on the Playa. And we’re on the other side of that one. So I hope we’ll be on the other side of this. The interesting thing is about it, is just because you’re in a plug-and-play camp, doesn’t mean you don’t get Burning Man or you’re doing it wrong. A lot of those people are doing it right. And they’re making huge contributions. You hear about the few that aren’t. So you have to suspend your judgment.

So, we’ve been extremely proactive about it. We’ve created new roles, a whole new infrastructure for dealing with vendors. We’re placing them, because we don’t want them going out there and doing it without us knowing about it, we want to keep them close in a community-minded way, so we can educate them, so they can be successful and we can be successful. You can just say, “Oh they’re terrible,” and “Don’t come.” You have to make them part of the community. Radical inclusion.

So that’s our plan right now. Time will tell.

How to Find Local and Organic Flowers in Your Area