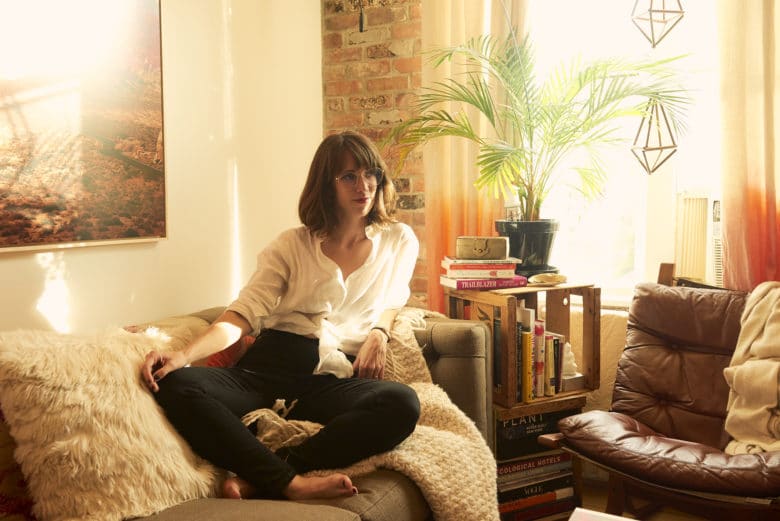 In the above picture (so much gratitude to the talented photographer and dear friend Nano Leon for capturing this dreamy scene), I’m wearing a linen top that was gifted to me by Rough Linen. And the curtains behind me are also linen, handsewn by my mother and dip-dyed by me.

I’ve always just assumed linen was sustainable. It looks sustainable, anyway, with its farmhouse-chic, gently rumpled, off-white vibe. When paired with dappled ceramics, it makes for a humble yet tasteful table setting that begs for a locally-raised roasted chicken and a still life of grapes and bread. It’s also in what seems like every new sustainable and direct-to-consumer fashion brand that creates loose-fitting dresses and pants.

But I hate making assumptions. If I’ve learned anything in this world of sustainable fashion, it’s that what everyone knows to be true is often not the case at all!

So I did the digging. Here’s what you need to know about shopping for and wearing this ancient fiber.

Linen was one of the most common textiles, along with wool, used by the Western world for thousands of years, with remnants discovered in 10,000-year-old prehistoric Swiss lake dwellings.

Along with hemp, it’s classified as a bast fiber, meaning it’s made from the stem of a plant. Linen is woven from the flax plant, which, also like hemp, can be grown in any temperate climate around the world.

“Linen naturally needs virtually no pesticides (its natural enemy is the fieldmouse, not insects) and little in the way of fertilizers or irrigation, so even in the ordinary run of things it is clean to grow,” says Rough Linen founder Tricia Rose. That’s why you rarely see certified organic linen, even from fashion companies with a focus on sustainability. “It can be called ‘organic’ only if it is grown on registered organic land with organic techniques, but the difference isn’t as dramatic as it is with cotton.” According to the 2017 Pulse of the Fashion Industry report, bast fibers are the second most sustainable out of all the natural fabrics, after wool. According to the report, it’s not as sustainable as synthetic fibers when you compare water and land use. But as I’ve pointed out before, their analysis doesn’t include chemical usage (which biases the analysis toward synthetic fibers) or post-consumer disposal. Pure, undyed and unfinished linen can be composted once it’s at the point of falling apart, a huge mark in its favor.

“Flax grows lightly on the earth, but it is labor-intensive to process,” Rose continues. It used to be an important crop in the U.S., before the cotton gin, a machine that mechanized the process of separating cotton from seeds, was invented and cotton became our favorite textile.  Even then, linen continued to be grown and worn by Americans until World War II and the advent of synthetic fibers.  Since then, linen production has been steadily dropping in the U.S. and Europe,  because of the high labor costs involved in processing it into a woven fiber. The top flax growers for textiles are now Russia, France, Belgium, Belarus, Poland, and Lithuania, who export it mainly to China and India — where labor costs are lower and the skills are higher — to be woven into linen. (In the U.S. we grow flax in North Dakota and Minnesota, but just for just the seeds and linseed oil.)

Rough Linen’s Smooth sheeting, for example, is woven in China from European flax. “The Chinese have the best and biggest looms,” Rose says. Indeed, if you haven’t yet heard, China often has the most cutting edge and high-quality fashion manufacturing at this point, and it has some of the most ethical and sustainable factories in the world, and some of the worst, so you can’t paint the country with a broad brush. Rough Linens’ other linens are grown and woven in Northern Europe and Belarus.

The Difference in Quality

Linen now represents less than 1% of global fiber production according to the CFDA (I can’t find the primary source for that number but it jives with what I know about the share of other fibers) and is so rare and costly to make compared to other textiles that it is considered a close-to luxury fabric. That’s despite the fact that the quality of linen has been dropping. Producers in Europe used to employ wet-retting, in which the fibers are softened by soaking them in a body of water. If done right, it yields a clean, high-quality fiber. Unfortunately, that was a laborious and super-stinky process (it’s essentially fermenting the fiber) and so it would really piss off the neighbors. Now producers use dew a.k.a. field retting, which is easier but doesn’t yield quite as clean and high-quality of a fiber. One North American company, Crailar, debuted an enzymatic process in 2014 to soften linen. Crailar linen, according to MadeBy, is the second most sustainable type of linen after organic, but it’s unclear how widespread that process is yet.

Still, there are big differences in the quality of linen from different countries. “All linen is good linen, but some is better than others,” says Rose. “The best has a natural luster and feels heavy in the hand [relative to its size].”

There are also different styles of linen. “Linen varies from ultra-fine handkerchief linens to sacking and tow woven from the very coarsest filaments, but this isn’t measured in thread-count,” Rose says. Rough Linen wanted to achieve a more rustic vibe, so they use Orkney linen, which has exactly the same texture, weave, and heft as homespun. “Even our sheets, ‘Smooth’ white, are heavier than just about any others out there. We wanted to get right back to elementals,” Rose says.

Is Linen Healthier for You?

As a natural fiber, linen will breathe and feel more comfortable on your body. But that doesn’t mean all linen is non-toxic when it gets to you. It depends on how it was washed, scoured, processed, softened, dyed and treated at the factory. Beware of linen products that promise to be wrinkle-free or wrinkle-resistant, as it might be treated with formaldehyde. Also avoid any linen that is billed as stain-resistant, as that is achieved using the chemical PFOA, which has been linked to cancer, developmental problems, and thyroid issues. Linen naturally comes in colors ranging from ivory to taupe, but pure white linen is only achieved through bleaching, which is fine if done in a responsible facility. And of course, other colors are achieved through dyeing. The brighter the color, the more likely it was achieved with non-natural dyes. Look for linen products that have been certified by Oeko-Tex or bluesign as non-toxic. (Rough Linen’s fabrics are certified by Oeko-Tex.)

How to Take Care of Your Linen

Linen is meant to be used and broken in. When you first receive it, it might be a bit stiff, but will soften up with repeated use. That’s why some companies mix it with cotton to soften it up a bit. But whether it’s mixed or pure linen you should treat it the same.

Rose of Rough Linen says: “Wash it with very little, mild detergent and line or tumble dry with wool balls. Be sure to take it from the dryer when it is still just discernibly wet. Shake it out and let it finish drying on its own so it will have texture but not wrinkles. If you see a wrinkle, spray it with water and let it dry.  Of course, you can iron it if you want to, but many prefer that incomparable, natural texture.”

I’ve focused on Rough Linen so far, because they specialize in home and fashion pure linen products. But I wanted to highlight other fashion brands using linen to beautiful effect.

100% linen cross-back apron made in Lithuania. Much of UK cult favorite Toast‘s fashion is linen blended with cotton or wool; 100% linen tunic handmade in Mexico by artisan brand Golindrina; Peplum top made by OhSevenDays from deadstock reclaimed linen in Turkey.

Natural linen overalls dyed and sewn in Los Angeles by MATE; Linen top made to order in Brooklyn by Born Native; Linen jumpsuit handmade in New York by Datura.

Mara Hoffman uses conventional linen in many of her styles. When on-boarding a new supplier, they look for partnerships that are Oeko-Tex® 100 Standard, and test their materials against a Restricted Substances List (RSL) based on the Zero Discharge of Hazardous Chemicals’ list;  these Amur separates are made from a blend of organic linen and organic cotton.

Weekend Reading: Here's the Data on Whether Consumers Care About Fashion's Sustainability