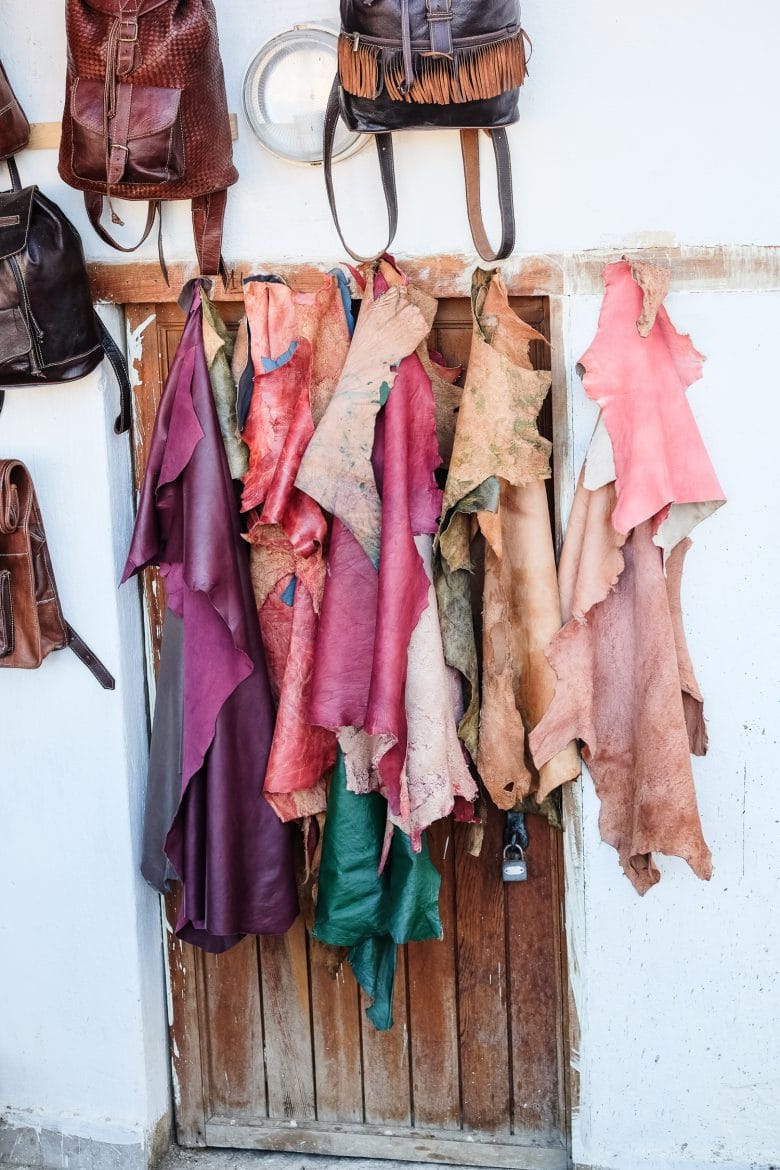 As someone who cares deeply about the subject of sustainable fashion, I’m often fiercely questioned when I wear or promote something made of leather.

I’ll concede that, at first glance, it seems hypocritical that I don’t eat beef but have several well-loved, cow leather shoes and accessories.

Animal agriculture is notoriously polluting and damaging. You know that. It is not in fact responsible for half of the world’s emissions as the documentary Cowspiracy claims — that figure has been debunked. The number is actually at most 18% of worldwide emissions. Still, other research shows that avoiding meat and dairy is the single biggest way to reduce your personal impact, and getting the world to switch from beef to beans could get us almost all the way to meeting our emissions targets. Most notably, livestock is the leading cause of deforestation in the Amazon. And most of the meat produced there does indeed get shipped to North America and Asia for our consumption.

So, it must follow that switching from cow leather to vegan leather would also be the sustainable choice, right? According to Kering’s Environmental Profit and Loss Report, leather does have an outsized impact compared to other materials. But there is one problem with this analysis.

It assumes that if the fashion industry stopped buying leather, that farmers would stop raising animals. In other words, this argument that environmentally, leather is the worst hinges on the idea that leather causes — or is responsible for — animal agriculture.

RELATED: Visiting Peru proved to me that alpaca is the most sustainable and ethical wool.

This is why much of the debate around the sustainability of leather centers on whether leather is a byproduct of the meat industry. If it’s a byproduct, that means animals are raised for meat and the leather is extra. Ranchers will sell it if they can, because they will take any bit of extra income and don’t like to see parts of an animal wasted. If they can’t sell it, however, they will throw it away, or burn it. Obviously, that would be very wasteful and very polluting.

If it’s not a byproduct, then ranchers are raising animals for the main purpose of selling the leather. And then our leather accessories are directly causing animal suffering, greenhouse gas emissions, and deforestation.

So which is it? Is it a profitable and important income source for cattle ranchers? Or is leather a side gig? 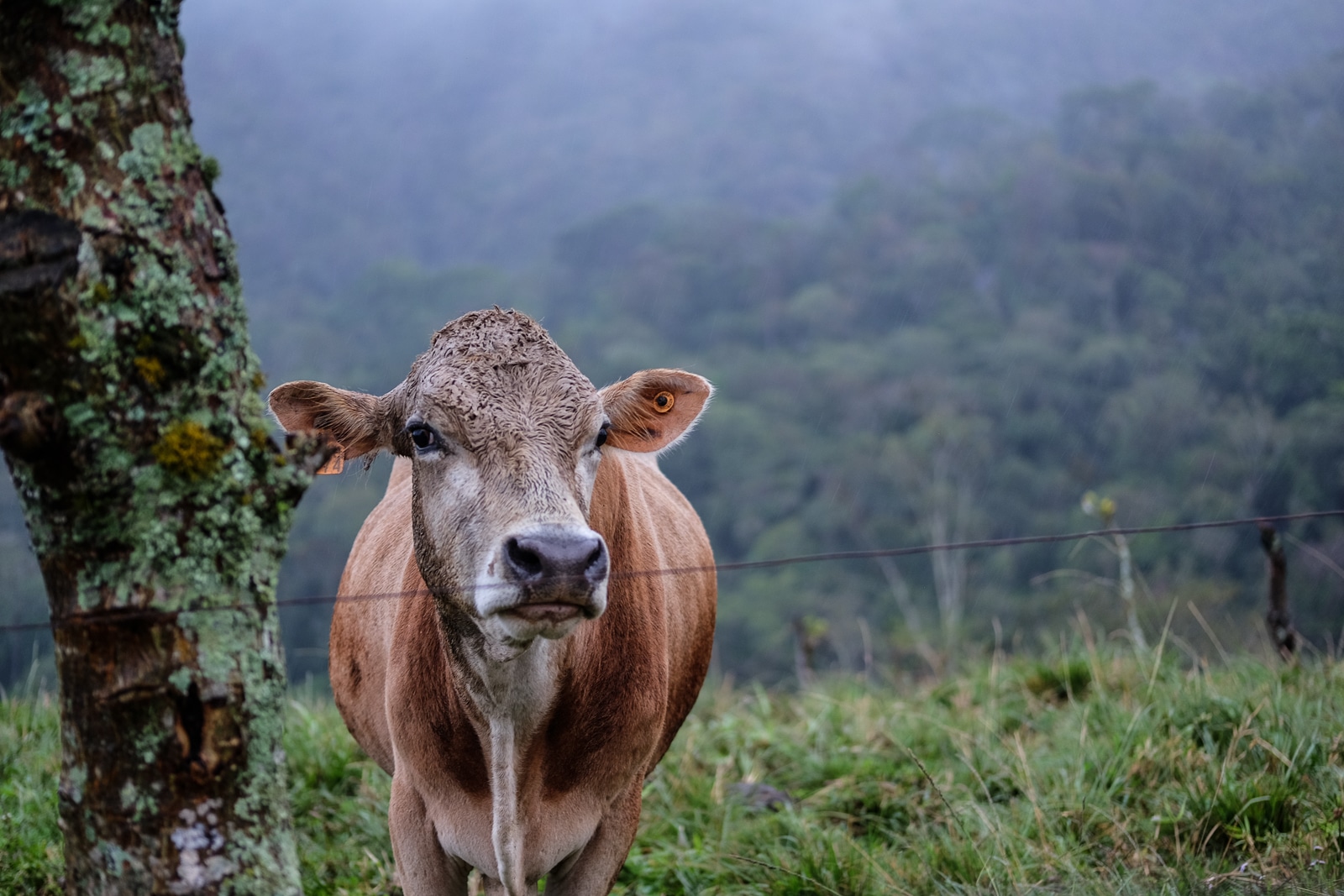 Will a Farmer Raise Cattle Just for Leather?

My great aunt and uncle actually raised beef cattle in North Carolina for many years. They were grass fed — I know, because I was always picking my way around the cow patties in the pasture. They sold them to a local canned chili manufacturer. I don’t remember them ever talking about skins in this equation. But that’s just an anecdote. Let’s talk about facts.

According to this 1992 analysis, cow skins represented 6% to 8% of an American cow’s total cow’s value. When prices for cow hides go up, profit margins improve, and ranchers are incentivized to buy and raise more cattle. OK, great! If we all wear less leather, then there will be fewer cows bought, right? And if we all wear no leather, than the beef industry goes out of business!

Actually, we can see what happens when we all wear less leather, because it’s already happened. Demand for leather has been plummeting in the past decade, as consumers switch from leather shoes to synthetic footwear. Leather prices have also dropped. Unfortunately, global demand for beef has been rising. So, now with high demand for beef, and low demand for the hides, there is a huge glut of cow hides.

In short, not buying leather isn’t going to save any cows from being slaughtered, it will just lead to a hide being wasted. In South America, which supplies China’s growing appetite for steak, an artisan designer told me piles of cow hides are even getting burned for disposal, because of their lack of use.

RELATED: I visited a handmade leather shoe factory in Peru, and now I want all my shoes to be from there!

This doesn’t just apply to South America. Leather comes from all over the world – anywhere you have animal agriculture, and BIPOC (black and indigenous) communities. The artisan brand Raven + Lily sources from an eco-friendly tannery in Ethiopia, a country that, “is actually a bustling hub for the leather industry, and our tannery works specifically with byproduct materials,” the brand director Katie Chaput told me via email. “Not only does the tannery use byproduct leather, but they also have a water recycling system to prevent pollution and use vegetable dyes instead of harmful chemical dyes.”

“It’s a byproduct of the industry,” says O My Bag founder Paulien Wesselink. “It’s stuff that would otherwise be thrown away, literally.” O My Bag sources from the area round Kolkata in India, which has a significant Muslim population. And unlike Hindus, Muslim families will raise a cow or three not just for the milk, but also the meat, which is important for their nutrition, income, and religious celebrations. The leather, which is worth about 5% of the overall value of the cow, is just a bonus.

“The leather industry will never keep the meat industry going,” Wesselink says. “People there live in poverty, so it doesn’t make sense for them to disregard the 95% of the cow. There is always an industry for meat. As long as that is the case, we had better do something with the leather.”

This calculus doesn’t apply to fine calf leather from Europe for luxury brands, however. As veal consumption has dropped in European countries, and demand from China has spiked, there has been a shortage of that particular kind of leather, and luxury brands are buying up leather suppliers to ensure their supply.

So yes, you can buy most cow leather from Asia, North and South America without guilt over the loss of a cow life –– you can  even feel good about using all parts of the animal and preventing waste! But be more careful about luxury purses that use calf and lamb leather. Lamb and veal are definitely two meat industries, but the value of the leather to meat is much higher in these situations, so buying luxury calf and lamb leather items might lead to the suffering of more (adorable) animals. It’s too bad, because luxury  leather tanneries in Europe are the best in terms of social and environment.

Ironically, the argument here is completely flipped on its head for skins like python, crocodile, and other reptiles. These skins are definitely the most valuable part of the animal.

So at first, I was cheered by Chanel’s ban on exotic skins. That is, until a group of conservationists spoke out against it. It turns out that many exotic skins are provided to luxury companies by BIPOC and POC communities all over the world, from South American tribes to Indonesian tribes, Mayan locals in Mexico and locals who live next to the Nile in Africa. They are motivated to conserve and protect habitats and wild populations of these reptiles because of the income luxury skins provides. And when that income goes away, they might be forced through their poverty to take up other common forms of rural income, such as logging, slash-and-burn farming, or gold mining. I’ve actually visited a crocodile farm in Australia run by an aboriginal community. It’s important to them.

So exotic skins: not a byproduct, but very possibly environmentally beneficial. Buy that python purse.

I know, so weird.

Is Wild-Caught Deer and Other Wild Animal Leather Ethical?

Well, native wild-hunted deer are certainly not from factory farms, which is a mark in the favor of deer leather. Deer are overpopulated both in Europe and North America, so there’s no risk of extinction.

Most importantly, if responsible land owners don’t plan for careful hunting of deer on their property, there is the risk of damage to the ecological system and other native species from too many browsing deer. The deer can become overpopulated and end up suffering and dying from starvation. Much of the land tracts are not big enough to support the reintroduction of big cat and wolf predators. For land that is seeing predators move in, the government has to compensate ranchers for the loss of livestock, or else ranchers will advocate for the culling of predators.

In conclusion, Europe hasn’t had real wilderness for a thousand of years or more. (Elizabeth Kolbert’s The Sixth Extinction is a good read for more on that.) Humans are a part of Europe’s ecosystem now, and we have a duty to act responsibly as predators to keep the ecosystem in balance. We cannot abdicate that responsibility because of our squeamishness about the circle of life. Would it be better if we had fewer humans, and less development into former forest areas? Absolutely. That’s why I donate to family planning organizations. But until then, this is the best solution we have for the current situation.

So you can consider deer leather not a meat byproduct (though you can absolutely find veal in many farm-to-table restaurants in Europe) but as a byproduct of ecological management of forest.

Osklen is another brand using animal byproducts that would otherwise go to waste. When they discovered that the skin of Pirarucu fish were being discarded and creating biological pollution, they decided to use the skin to create leather bags and other pieces. Pirarucu fish are one of the largest freshwater fish on the planet, and they are a crucial piece to Brazilian ecosystems and communities, who use the fish as both food and income. Not only are they using a natural, biodegradable material that would otherwise be thrown out, but they’re also creating jobs for locals in Brazil as well.

Or you could make it double eco, and buy something from the Brazilian brand Volta Atelier. This brand makes purses and bags out of leather offcuts from leather goods factories, including pirarucu, and employs Haitian refugees in their atelier.

What Types of Leathers Are Ethical and Sustainable? 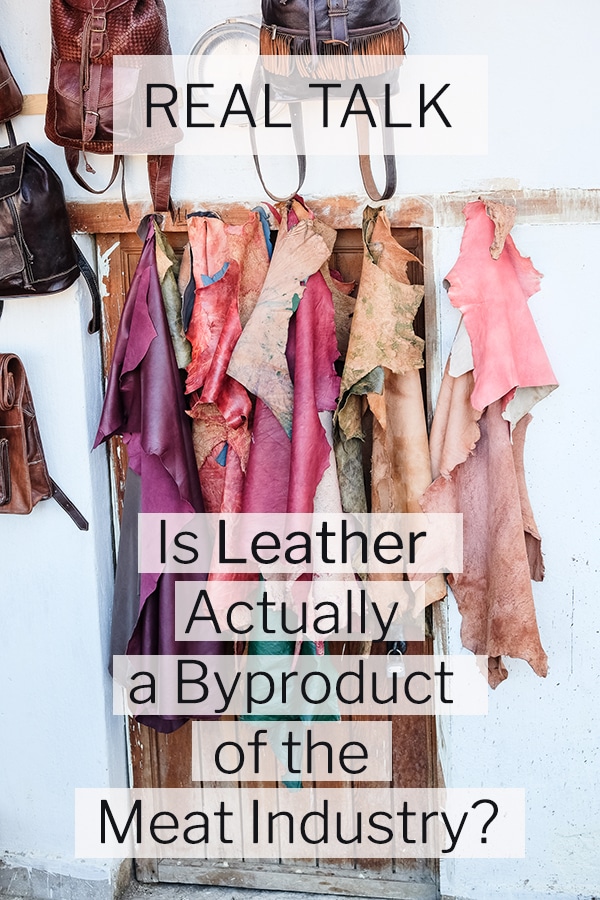 Weekend Reading: This Is How You Should Eat to Save the Planet