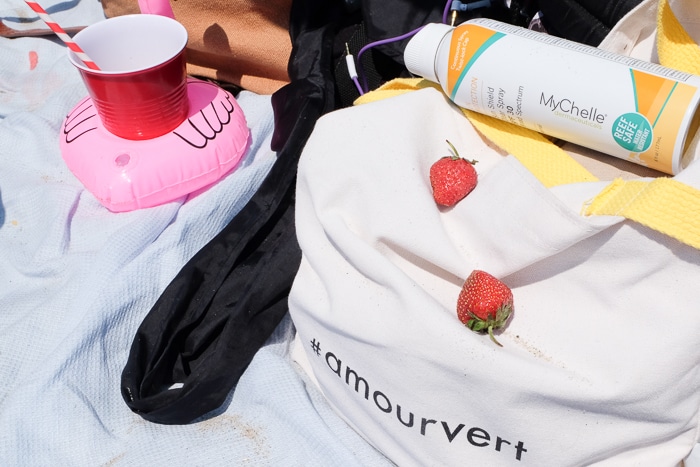 I gave it a fair shot. I’ve been trying to make it work for probably seven years now, but it never really was right for me. Non-toxic sunscreen is like that nice guy who is also so awkward and clingy. You feel guilty ditching him because you want to be a good person, but you finally just have to come to terms with the fact that he’s holding you back from living life to the fullest.

The first time I had an inkling that non-toxic sunscreen sucked was nearly six years ago, when I visited my friend Anna at her lake house. I – well, slathered is the wrong word. It’s more like trying to knead clay into my skin, which goes as well as you would imagine. I worked the thick, white, zinc paste into my skin and asked for help from my friends for my back. They giggled and made fun of my “geisha paint.” I didn’t care. I was protected and proud. But by the time we were driving the boat back in, I had a nasty, all-over sunburn.

I thought maybe it was because I was on the water and hadn’t reapplied it enough. So I kept trying, and failing, to use it the correct way. Not always, though. Sometimes I used whatever conventional sunscreen was made available to me with a twinge of guilt, but that always seemed to work fine.

When I went to India last month, I brought my non-toxic sunscreen with me. I was alone, so I applied it as best I could. I got a huge sunburn. Which makes sense – I couldn’t apply it all over my body, after all. But here’s the kicker: there was literally no difference in sunburn between the places I could reach and the places I couldn’t. There were no fingerprints, blobs, or lines, except for my bathing suit lines. I was one solid red color from the tops of my feet up to my shoulders. It was as if I had never put sunscreen on at all! I came home to NYC, started peeling, and reapplied the clay-like substance for a long bike ride, during which my friends and strangers alike gently asked me WTF was wrong with my skin.

Maybe, it’s not me. Maybe I’m not a bad person. Maybe, just maybe, it’s the sunscreen. According to Consumer Reports, natural sunscreens (a.k.a. mineral sunscreens) that contain titanium dioxide and/or zinc as their active ingredients have consistently performed poorly compared to their conventional counterparts. Honest Company’s sunscreen has been dinged in a lawsuit and on social media for not doing shit.

But, you might wonder, what is the point of protecting your skin from sunburn and eventual melanoma, if you use toxic sunscreen that will give you cancer? 2019 research did show that these chemicals enter the bloodstream, but that is just the first step towards knowing if they are toxic. Well, according to a Whole Foods-shopping dermatologist (that is, a dermatologist who is not hostile to the organic movement), it would take 200 years of regular application of conventional sunscreen’s effective UV blocker oxybenzone to, “reach even questionable levels of exposure” that would cause hormone disruption which might then lead to cancer at some point down the road. (The study that raised the alarm involved feeding rats a massive amount of sunscreen, at which point their uteruses got bigger. I’m not planning on eating my sunscreen, so I’m not sure that applies to me.) Huh. If this ingredient is not so bad, why on earth am I torturing myself? Why am I aging my already sun-damaged skin in a quixotic quest to avoid what looks like a fictional toxin?

But, the plot thickens. (Pun intended.) Some people are allergic to Oxybenzone, and in that case, they have to avoid it. I’m sorry.

And then there is this list of ingredients that harm the marine environment, which basically includes anything that would protect you from UV rays. But…they caveat it by saying more study is needed. They also say that it is entirely replaceable by other ingredients that are less toxic to marine life. But conveniently leave out the fact that the FDA in the U.S. is weirdly hostile to approving these other ingredients. Concerned consumers are left in a lurch by this situation. I certainly don’t want to poison the already beleaguered coral. But I also don’t want to get melanoma.

Oh, the life of a conscious consumer.

The dermatologist goes on to say that the other ingredient in question, retinyl palmitate, does not cause cancer – it is, “an antioxidant that occurs naturally in the skin,” and the study that was freaking everyone out was never published in a peer-reviewed journal. However, there is still vigorous debate about the ingredient. Retinyl palmitate is a form of Vitamin A that is put into sunscreens so that the brand can tout its anti-aging properties. You’ll also find it and its close cousin retinol in your anti-aging skincare products, the ones that you’re supposed to put on at night because you’re not supposed to be in the sun after you’ve put them on your face, because it thins the skin just a bit, which lowers its natural SPF, and more importantly, because Vitamin A degrades quickly when exposed to sunlight, making it less effective when applied during the day. The thing is, out of all the vitamin A ingredients, retinyl palmitate is the least effective in preventing aging, so unlike oxybenzone, there’s not much point in having it in your sunscreen at all. Plus, it’s made from palm oil, an ingredient that is destroying rainforests and contributing to air pollution and climate change. According to the EWG, it’s in 14% of sunscreens, not impossible to avoid.

Wait, is everything I “know” about nontoxic beauty wrong?

I really hoped to get this written up and published in a few hours. But then I fell down a rabbit hole trying to find a credible list of the most toxic personal care ingredients to avoid. I couldn’t find one. I’ve been citing the Environmental Working Group for years as my go-to resource for information on personal care safety. But now I’m reading from multiple sources that the EWG engages in fear mongering and inaccurate ratings, because they make money off of organic product sales, and get more donations each time they do a personal-care-products-are-scary media push. Any organization that pushes anti-vaccine hysteria is not a good resource. There are other, more accurate resources, but they’re completely unusable by lay people.

The European Union, which beauty bloggers cite as the gold standard, has even banned certain parabens from use in cosmetics, but approved others – at certain concentrations, which may be exceeded if you use multiple products with these parabens, some experts contend. Parabens are preservatives, so that’s a drawback for your wallet. Natural skincare products are often more expensive than the alternative, and you need to throw them out after a year or so if you don’t use them up quickly enough.

The best breakdowns of the situation are at The Washington Post (when in doubt, avoid phthalates and fragrance) and Fashionista. The Fashionista author went through what I’m going through now, and came out on the other side advocating for more study of ingredients because right now we just really don’t know what’s good and what’s bad. And more ingredients are being invented all the time without getting any study at all. Scientists agree the system in the U.S. is broken. But that doesn’t mean we should just make stuff up and throw it at consumers. It’s distracting from the real issues (um, hello, shouldn’t we be concentrating on banning clearly toxic substances like PCBs and getting lingering lead and mercury out of our water and homes?), and forces consumers, especially parents, to spend outlandish amounts of “safer” products, when that money could be going to other, more important uses.

I’m more afraid of the sure thing (sun is a known carcinogen) than the speculative thing (conventional sunscreen ingredients may or may not lead to cancer at some point). I want to stave off brown, crepe-y skin as long as possible, and that requires use of sunscreen that works. As I see it (and I may update this later) there are three things to consider for a conscious consumer of sunscreen: