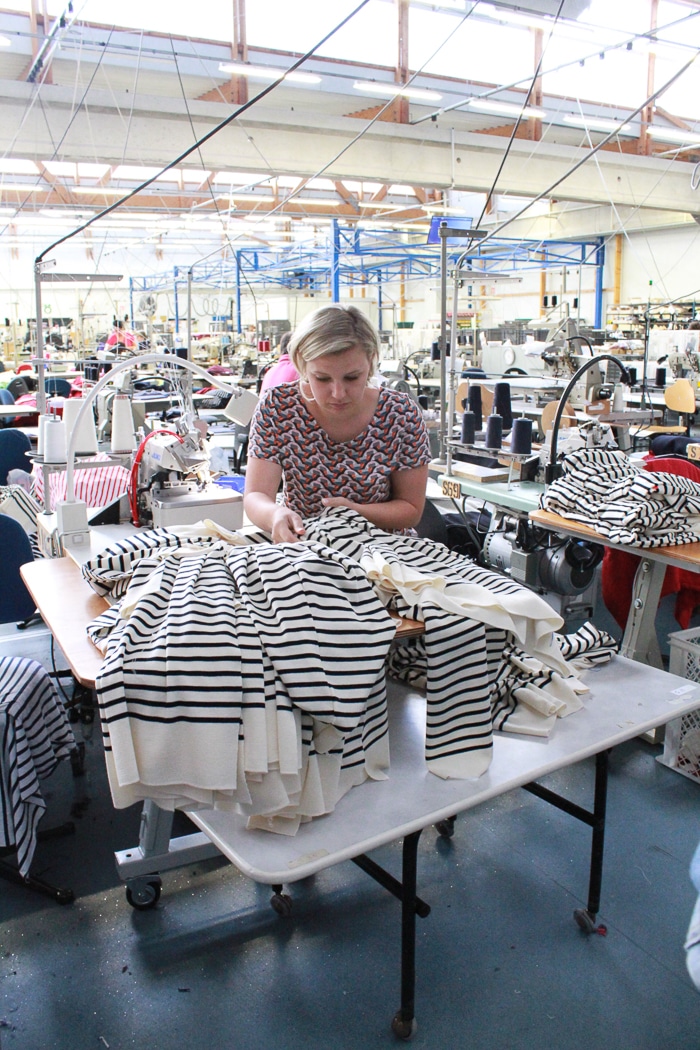 It’s a must-have for any ethical fashion brand. It’s often the first thing I ask of small and large brands both. I know that it’s exceedingly difficult to manufacture in a developed western nation and compete with the low prices and increasingly sharp skills of Asian countries. So I ask the question: “Have you visited the factory?” I want to know if the owners met the women (it’s almost always women) making their clothes and they seem happy; if the factory was clean and well-lit and had unchained fire exits.

But I was recently offered the chance to visit a clothing factory that defies all expectations and conventional wisdom around outsourcing, and shows that there can be a different way when it comes to manufacturing. That was the Saint James factory in Normandy, France.*

Saint James is a heritage French brand, maker of the quintessential nautical striped shirt and sweater. Think of Coco Chanel, who brought it out of the realm of sailors and into chic beachside wear for women, plus Audrey Hepburn, Brigitte Bardot, and my own beautiful grandmother, pictured looking at the camera in the 1930s on the Gulf Coast. (She is not wearing a Saint James sweater here. You can tell because the stripes aren’t in the signature width and spacing – 10 mm to 20 mm. Plus, Saint James was only sold in coastal France at the time, and she wasn’t doing that type of traveling, to my knowledge.) Talk about an “investment piece,” something you’ll pass down to your daughter – this shirt has never gone out of style and has scarcely changed in the past century, with 20 to 21 stripes in blue and white.

But it goes back farther than the 1930s. Much farther. In the 19th century, natives of the seaside village Saint-James started making the Breton Fisherman Sweater, a wool sweater tightly knit from local wool. The wool retained the waxy lanolin of the sheep, making it close to waterproof. In 1858, the striped sweater was officially adopted as part of the French navy’s uniform. (And Saint James still knits the French army’s sweaters!) At the end of the century, Saint James was incorporated as a company independent of the town. In 1917, thanks to Coco, the striped sweater was adopted as the unofficial beachside uniform of the leisure class. The company emerged from the trauma of WWII and the Occupation with just nine employees in 1950, slowly rebuilding. In the 70s, they switched to a low waste knitting method, knitting the pattern of the sweater from the get go, instead of knitting squares and cutting them into the pattern. In the 1980s, Saint James starting working with cotton and other fabrics to make the line all-season.

This is where things get really inspiring – at least for ethical nerds like me. Up until the 90s, the company was still family owned by the Bonte family. But Bernard Bonte found that no one in the family was interested in running the brand. So the employees bought it out, creating an employee-owned company. In 2010, the current owner, Luc Lésénecal, bought a majority stake. But the company is still run according to a committee of employees, with input from everyone. The big controversy going on when I visited? Apparently, the employees are having a hard time deciding what kind of music to play while they work. Quelle horreur! 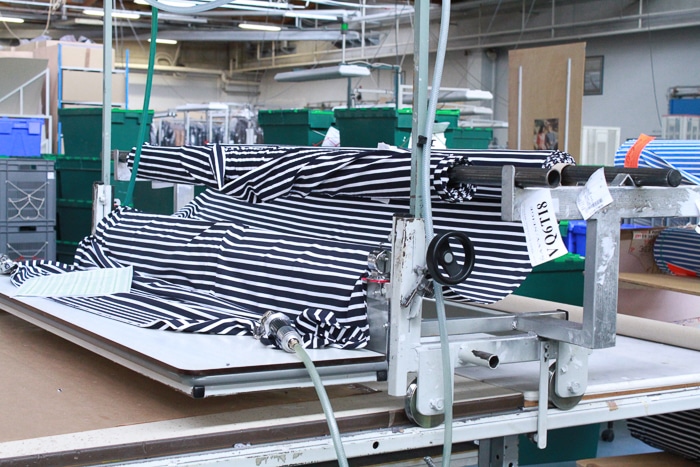 The Saint James factory is still located in Saint-James the town, in Normandy, about three hours drive from Paris. (If you’re in the area, you can ask for a tour yourself!) Everything that is core to Saint James – the knit items – are manufactured there. The newer additions to the collection, like the pants, button downs, scarves, and raincoats, are made elsewhere in countries that excel in these skills, like Portugal, Turkey, and Ukraine. The factories that Saint James contracts with are constantly visited by several Saint James employees, they must sign a charter stating there is no subcontracting, and employees must be treated with the same respect as Saint James treats its French employees.

Though, I asked, and these other factories aren’t run quite in the unique way the Saint James factory is – it would be hard to live up to it! Rather than siloing the 312 employees into certain repetitive tasks, which can be boring and injurious, Saint James puts them into groups of eight employees who have gone through two to five years of training in all aspects of the manufacturing process, and can decide amongst themselves how to divvy up tasks to meet their goals and achieve the quality Saint James is known for. Employees work for 35 hours a week, and get lunch breaks and vacation. Some work longer days, so they can give themselves longer weekends. That’s their choice, as autonomous employees whose work-life balance is respected. 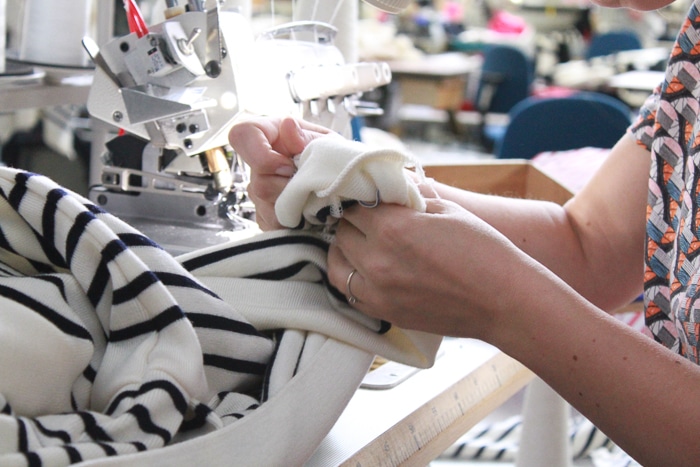 The materials that go into the garments include cotton from Belgium and France, Woolmark certified New Zealand and Australian wool that is knit in Italy and Austria, and an anti-UV viscose. The main challenge that has so far prevented Saint James from moving into more sustainable/ethical fabrics is price and quality. Saint James shirts right now are at an exceedingly price point that reflects their quality without becoming a luxury item ($75 to $159). They tried for a time to work with a supplier in Australia that meticulously certified the well-being of its sheep, but found that it made the wool too expensive.

“Our customers want natural fibers,” the president Luc Lésénecal told me over lunch nearby at a modest restaurant. “Four years ago we had an organic cotton striped tshirt with Two Thirds. I think it was too early.” The organic cotton at that point wasn’t the same staple length and consistent quality as conventional cotton – it tended to shrink too much. Normal cotton shrinks about 7%, and the organic cotton shrunk 15%. But Saint James is not ruling it out. “Now the quality is I think the same,” he says.

During my visit, I came to see that Saint James – with its heritage, employee ownership, and freedom from investors – moves deliberately, considering each move in the context of whether it will keep the company healthy and benefit the workers. But there are other ways they try to be more conscious: they avoid real fur, and they use the waste from cut fabrics to make bracelets they sell. 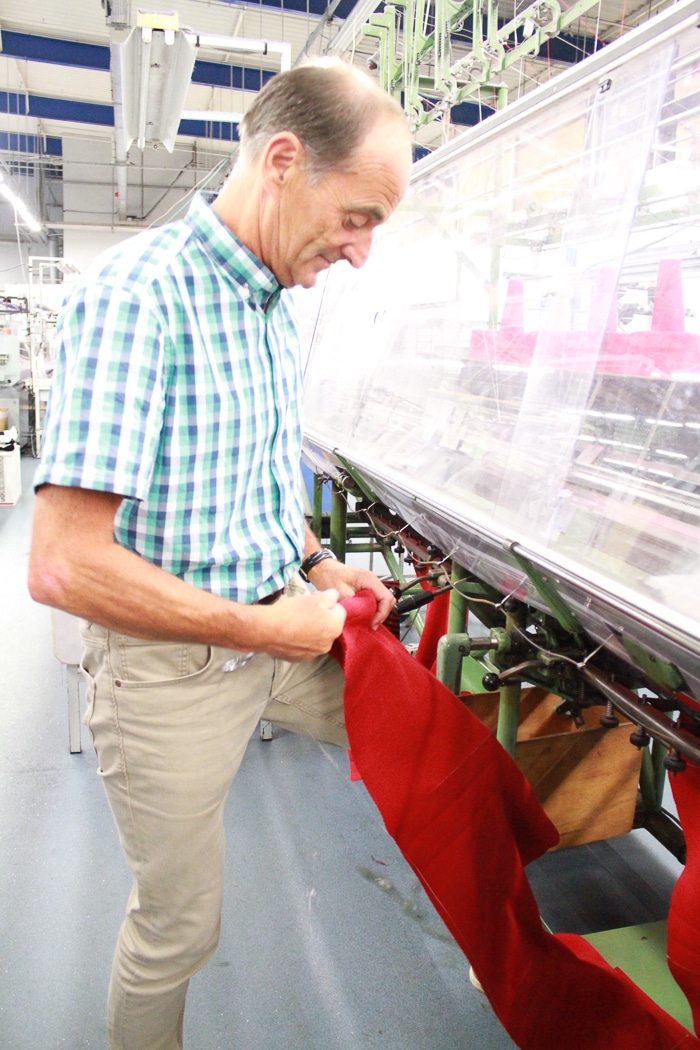 We met Maurice, a knitter who has been with the company for 39 years and was about to retire in two weeks time. He showed us around the factory – one of the largest apparel factories in France – where Swiss and German knitting machines hummed hummed and clacked. On the other side, employees sewed the knit pieces together, and inspected each garment for faults.

Instead of throwing out defects, they perform raccoutrage, a skill that takes five years to learn and garnered Saint James the designation Entreprise du Patrimoine Vivant, a living heritage brand. In a special room, silent and shut off from the distractions of the factory, several women lean over magnifying lights and delicately fix any defects, such as a stray thread in the wrong color woven into a stripe, a bit of hay from the original sheep woven in, or a dropped stitch. They are completely silent, focussed on the task. Every single sweater goes through this room, emerging perfect.

Because of the quality and the tight knit, these sweaters are built to last a lifetime. If your sweater fails or rips, even 15 years after you bought it, you can send it back to Saint James. They know exactly when it was manufactured, will check to make sure there was nothing wrong with that production line, and will carefully fix it for no more than 15 euros.

“When people buy from Saint James they know where it is made, how it is made,” Lésénecal says. “People more and more want authenticity, quality. We want Saint James to be fashionable, but to stay classic. The striped sweaters, you must have one or two in your wardrobe.” 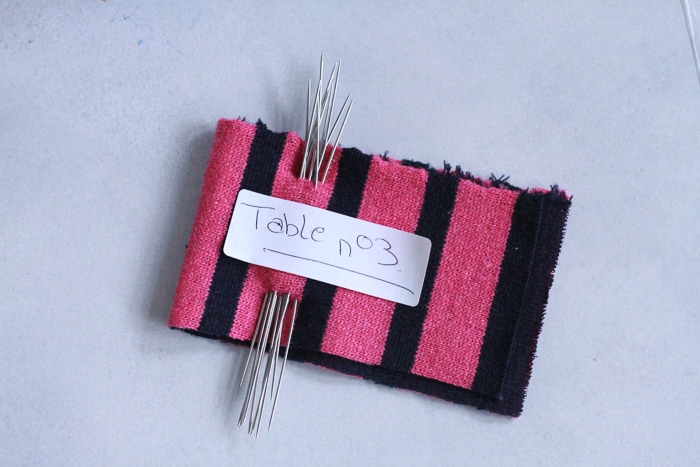 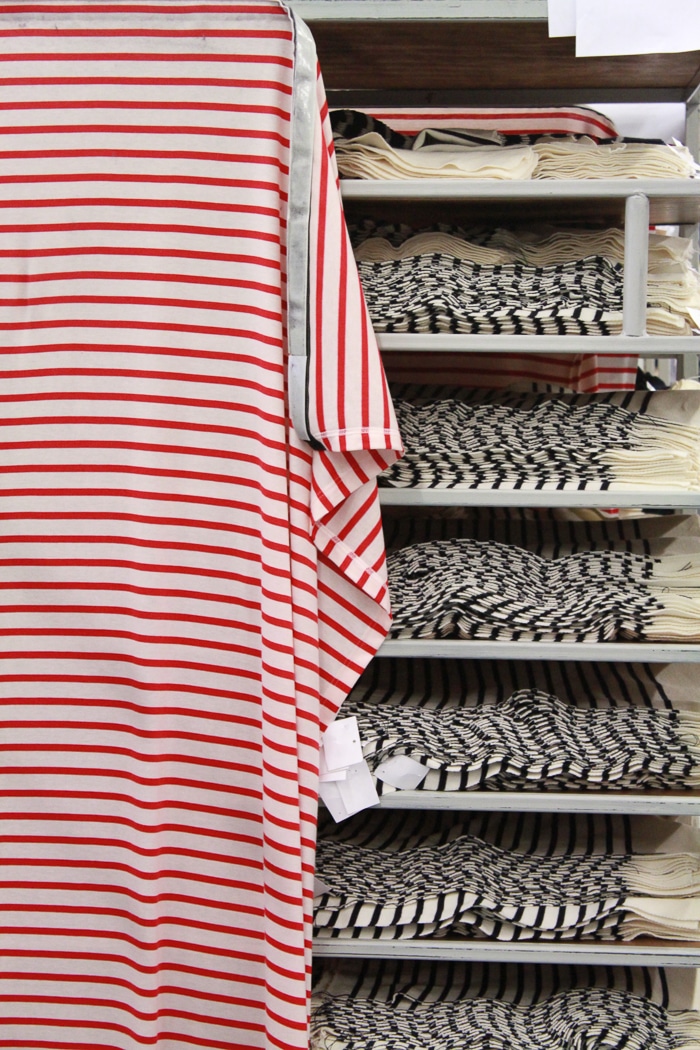 “Every morning I still get goosebumps to see the knitting men walking in the factory. It’s so good to have them right here.” Jacqueline Petipas, Saint James’ Director of Collections, says. “I can throw ideas back and forth with them.”

Petipas is focused now on making subtle updates to the brand that make it wearable, but respect its heritage. And she likes to play around with the capabilities of the knitting machines, while respecting the skill and know how of the employees who design and program the machines.

She’s uniquely suited for the job of working with such a revered heritage brand. Born in the town of Saint-James (population: 3,000), she developed her design skills at H&M before coming to work at Saint James the company. “It’s like an ecosystem here, everybody knows someone who works at Saint James,” she says.

My visit to the Saint James factory gave me hope for ethical fashion, for American manufacturing at large. It demonstrates that when you have an employee-owned model, when you focus on quality and value and heritage, you can weather the winds of globalization. I just wish that more heritage factories followed this model. It shouldn’t be unique, but the norm.

When I told Petipas that I am passionate about ethical and sustainable fashion, she told me that her kids wear her old Saint James sweaters from her childhood. “To me, that is sustainable.”

*Saint James generously financed this trip. We were given complete free reign wander the factory, take pictures of anything, and ask the employees and president any questions we wanted. I only accept trips from brands who are doing good work. Without their generosity, I would have never made it to Normandy to see for myself!

Weekend Reading: It's OK to Be a Sustainable Hypocrite. That's Not the Point

Green Beauty Review: Mullein & Sparrow Is So Different From Other Skincare