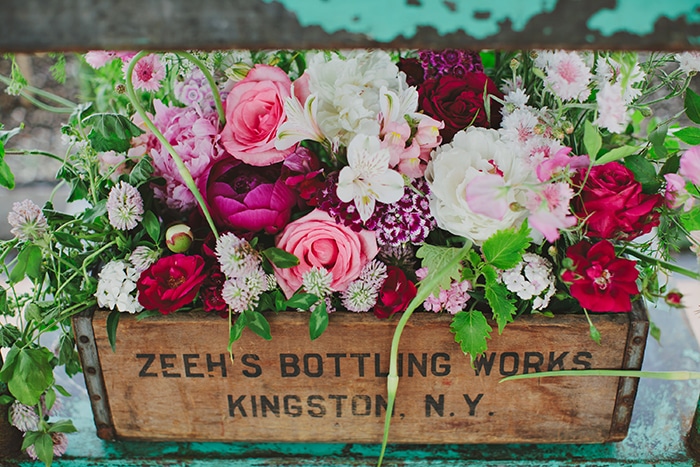 Outside it was cold and rainy, the kind of night that makes you want to snuggle in bed. But I was upstairs at 61 Local, a farm-t0-table restaurant in Cobble Hill, hanging out with florists.

There were six of us in this intimate gathering, nibbling on light bites and drinking beer and wine in the cavernous, exposed-brick room. To my right was Molly Culver from Molly Oliver Flowers, who sources flowers from NYC urban farms, regional growers at NYC farmers markets, wild spaces, and the wholesale flower district. Quill Teal-Sullivan was there from Meadow Burn Farm, a historic garden in New Jersey, and Gloria Collins from GBC Style in Montebello, New York. Jessica Stewart and Justine Lacey from Foxglove Studio sat across from me. They often get farmers to bring flowers down with them from upstate when they’re bringing food down for the Greenmarkets. Commanding the table at the end was floral designer from Celadon and Celery, an event planning service. I asked him, just out of curiosity, how much one of their weddings typically cost. “Oh, they’re not large. Maybe $11,000 to $35,000,” he said.

This small party (it would have been larger, except for the horrendous weather) was convened by Debra Prinzing, founder of SlowFlowers.com, a directory that helps consumers find farms, florists, and flower retailers who source locally and ethically.

This isn’t a topic many people think about–where their flowers come from. There used to be a whole passel of rose farms right in New Jersey, and now there are zero. US flower farmers have dwindled, as cut flowers from Colombia and Ecuador flood the market. (As per the law of unintended consequences, flowers were supposed to be a good economic substitute for cocaine production.) Now 90% of our cut flowers come from Ecuador and Colombia, where oversight of pesticide use, worker conditions and water management are weak. And it takes an incredible amount of refrigeration, and hence energy, to keep those flowers fresh during their long trek up north.

If you like shopping at the farmer’s market, this should bother you. But Slow Flowers offers an elegant solution. Just type in your zip code and it will bring up florists in your area who have committed to sourcing at least some of their flowers seasonally and from local farms.

“It’s a play on slow food,” Debra told me about the Slow Flowers name over the phone a couple weeks before the party. “It’s a metaphor for helping people think about how their flowers are grown, how far they had to travel to get to them, and what practices were used to produce those flowers.”

Obviously, sourcing locally becomes harder to do in the wintertime, but that’s where florists get creative. They can use pine and other evergreen foliage, source from greenhouses in the tri-state area, or buy from California. “There are really great growers in California,” Prinzing says. “The carbon footprint of putting flowers on a truck or plane to New York from California is still going to be much lower transportation footprint than shipping a jumbo jet from Bogota to Miami and then up to New York. Some people are purists and would never do that, and some people are like, ‘I have this crazy bride and she really wants roses, and I can get them out of Oregon or California.'”

(The best bride, as Teal-Sullivan tells me, is one who says what she doesn’t want, what she’s allergic to, and then leaves it up to the florist to surprise her on her wedding day.)

At the party, there’s a show and tell, where everyone passes around Instagram photos of recent weddings and other events, nerding out over boweries and varietals. The florists collectively fret over ordering peonies from Alaska (sustainable? not?), of what to do when winter comes, and bridezillas who don’t understand that weather affects what flowers you can get in October. The event planner tells a story of his planned road trip down to a Virginia farm, where he would spend the night and then bring flowers back up to the wedding. (It fell through because of the weather.) Lacey keeps bringing up her idea of doing a special, local wholesale flower market. I beg her to consider doing a consumer-facing farmers market for flowers, as visions of an entire street flooded with blooms dance through my head.

Prinzing gives a presentation on floral trends: flower CSAs (Molly Oliver does one in Brooklyn for $200 a season), cultivated wildflowers, richer and darker colors, vines trailing from bouquets, uncommon foliage like raspberry leaves or scented geranium, herbs in your arrangement, man bouquets (mostly a same-sex wedding thing) and even floral beards. “That’s probably the most extreme thing I have in this report,” Prinzing concedes as I take in a picture of a man with baby’s breath dotting his beard. She tells us that brides are pre-ordering blooms a year in advance for farmers to plant just for their wedding, and florists are doing micro loans to flower farmers in order to secure a say in what flowers they’ll grow in the coming season. Stewart reveals that Foxglove actually went to a farm and physically  helped plant flowers so they could have first dibs later on.

Prinzing hands out a special alternative to the common green, carcinogenic, floral foam many florists use. It’s a moist block that looks exactly like a brownie, made from coconut husks. As everyone talks, they absentmindedly start making tiny arrangements. I put together a little bouquet, borrowing Culver’s shears to neaten up the stems.

It’s getting late, so I excuse myself, but as I walk down the steps, the florists talk on, comparing notes and strategies. Winter may be coming, but they’ll be ready.

Homecoming in Greenpoint: Go for the Coffee, Leave with a Plant

"It Could Be the Thing That Kills Us:" Interview with Harley Dubois of Burning Man on Leave No Trace and Turnkey Camps