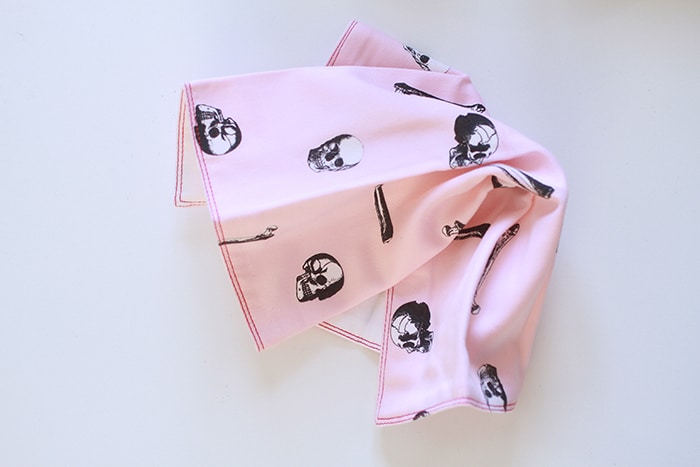 I’m a big proponent of handkerchiefs. When you’re living sustainably(ish), throwing out a pile of paper starts to seem wasteful. Why can’t we do it the way our grandparents did it? In fact, I remember my grandfather having a large collection of cotton handkerchiefs at hand that my grandmother would lovingly launder and fold into little squares.

So it was with interest that I found out about TSHU, a modern handkerchief company. Made in Montreal, TSHU handkerchiefs come in fun patterns for men or women. And for every one you buy, they plant a tree. I chose a two-ply, pink one with skulls and bones on it,* because I’m a badass.

When I got it, I immediately was drawn to how lush and soft it was. I carried it around for a week, rarely using it, but relishing dabbing my nose with such a cute ‘kerchief.

And then I got a sinus infection. Suddenly, it was the best thing ever. It saved me over and over: when I was waiting for the train, on the train, getting off the train, walking to my appointment, at my appointment. It was a soft, pleasant workhorse of a tissue. I only wish I had two so that I could wash one at the end of the day and rotate the other in immediately.

As founder Marion Poirer told Fair for All Guide, handkerchiefs aren’t just for colds. They’re for wiping your hands when you’ve eaten some finger food, wiping your sweaty brow, or cleaning your iPhone screen or sunglasses. I want to get one for my boyfriend, who gets disgustingly sweaty in the summer. The only drawback is that only one style is organic.

But yes, I wholeheartedly endorse TSHU handkerchiefs as a problem solver for the sustainable set.

*I got this free to try.

Talking Sex and Sustainability With Meika of Sustain Condoms

Vanessa Lianne Jewelry Is For Stylish Chicks Who Care