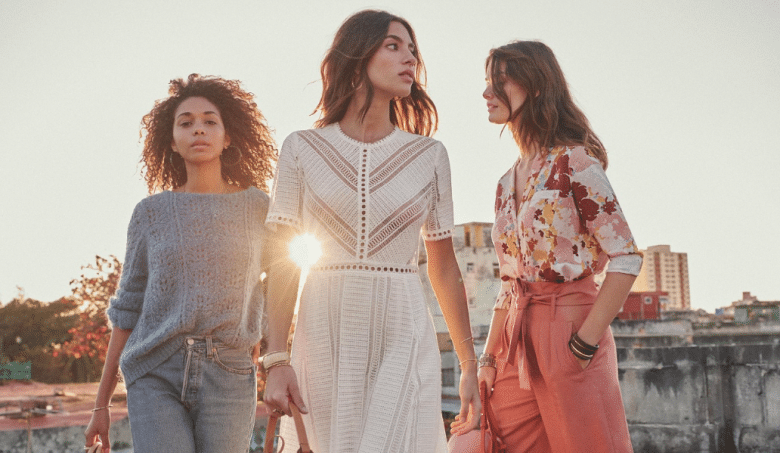 Several years back, I discovered a French brand named Sézane, with minimalist, classic, and ladylike separates, dresses, and shoes. They said somewhere on their website that almost everything was made in Europe (mostly Spain). That was enough for me to put them in my shopping list and include them in a couple of packing lists for Europe. After all, at that time the options for sustainable and ethical style were so predictably crunchy, that I leaped at any brand that seemed to offer an alternative.

Fast forward to May 2017, and I received an email from a French reader named Maëlle (side note: what a pretty name!) saying that she couldn’t find any information on Sézane’s website talking about ethicality or sustainability. I checked, and it was true. There was nothing. Disappointed, I took them out of my packing lists.

It turns out Maëlle was not alone in her curiosity. This question of whether Sézane is ethical has continued to pop up. And with the recent commitment by Paris to become the sustainable fashion capital of the world (they’ll have to catch up with Copenhagen and Stockholm!) I thought it was a good time to revisit the question.

Starting Down the Path Towards Sustainability

Good news, French fashion lovers! Since I last checked, Sézane has created an internal “Green Team” headed by four women dedicated to environmental matters. And they’ve created a remarkably detailed and honest microsite describing their accomplishments, charitable giving, goals, and challenges toward becoming a sustainable and ethical brand. I really suggest you go take a look for yourself, but I’m going to summarize what I see as the most relevant points:

Who Makes Sézane’s Clothes, and Where?

Two-thirds of Sézane’s designs are produced in Europe, and the rest is produced in the most appropriate countries globally. Sézane has a watercolor map on their website where you can click through to read about the owners of some –– but not all –– of their suppliers in Europe, Hong Kong, India, and northern Africa. The interviews are about the people who own the workshops and factories, however, and don’t have any pictures of the factories. So, it humanizes the supplier, but doesn’t offer as much information as one would wish.

Some of Sézane’s knits and all of their silks are produced in China. (China has great and terrible factories –– it depends on the quality of the supplier chosen.) Sézane claims that 86 inspections were performed at their factories in 2018, either by Sézane itself or by third-party agencies, and 84 of these inspections were positive. In the cases where problems were found, the issues were quickly addressed and corrected, “such as when a supplier neglected to mark its emergency exits. In the two cases where the inspections failed, we were forced to end our partnership with the respective suppliers.” All of their shoes are now manufactured in Europe, in Italy, Spain, and Portugal.

This transparency is pretty good for a mid-sized brand, but can Sézane claim that it is ethical? Well, almost any brand that cares at all about its reputation will be able to talk about inspections performed at its factories, so that doesn’t set Sézane apart. As well as they seem to cherry pick which workshops and factories to showcase, instead of listing them out. But that is not so unusual – many brands are not keen to give away the secrets of where they manufacture, which would allow other brands to come in and scoop up those factories that they worked so hard to find. Sézane also doesn’t seem to be showcasing any particular traditional or artisan production in developing countries, but rather more modern outfits.

How Sustainable Are Sézane’s Materials?

Sézane is in the midst of transitioning from conventional materials to more sustainable ones, and gives a lot of detail on this process.

For 2019, they have several goals in the works, such as producing 80% of their sweatshirts and t-shirts from organic cotton, releasing an eco-friendly denim line, and releasing a sustainable version of their Jack sneakers. They don’t currently have any certifications, but say they will win GOTS and Oeko-Tex this year for some of their materials.

Comme ci, comme ça. So, right now their fiber mix is not that impressive (only 1 out of 10 items are made with eco-friendly fabrics?) but it seems like it’s about to get more sustainable in the next few months. It remains to be seen if these will just be capsule collections or the proportion of organic and eco textiles will continue to expand.

Does Sézane Donate Any Money to Charity?

Last year Sézane created DEMAIN (“tomorrow”), a charitable program that benefits three children’s organizations: “Voix de l’Enfant” and “Sport dans la Ville” in France, and “Pencils of Promise” in the USA. To fund DEMAIN, they launch one new item on the 21st of each month and contribute the full amount of the item’s sales –– as well as 10% of all the day’s revenue –– to the project. In 2018, they sent over one million euros to charity. Check out the DEMAIN collection.

Bien! This is way above and beyond the scale of charitable giving that a fashion brand of Sézane’s size usually engages in. I’m impressed.

Does Sézane Take Back or Recycle Its Clothes?

For Sézane pieces in good condition, they encourage you to sell them on a secondhand website such as Vestiaire Collective. If the pieces are a little more shabby, you can always drop them off at the Sézane charity boutique in Paris for their ‘Grand Collect’ program. They’ll donate your old clothes to organizations who either recycle them or sell them in their second-hand store. This store also sells pieces left over from photo shoots and test fittings. All profits from the charity store go to DEMAIN. This year they’re hoping to institute in-store repairs as well.

Bien! This is a really great and forward-thinking program that encourages thoughtful use and reuse of Sézane fashion.

Sézane says that they’ve reduced the amount of plastic packaging they use, and all of their French-made cardboard boxes have been switched to FSC-certified and/or recycled cardboard. Whenever possible, they replace boxes with envelopes that are lighter (and hence less carbon-intensive to ship). They’re in the process of streamlining their boxes by eliminating unnecessary labels and excess wrapping, and adapting the size and shape to best fit the items they are designed to hold. (Here’s why they make no mention of eliminating plastic polybags.)

Bien. I like that they are exploring how they can reduce superfluous packaging, though nothing here is revolutionary.

Sézane does use animal products, such as leather, wool, and silk, but they do not sell anything with fur. Their statement on animal products is this:

“We are also very sensitive to animal welfare and only purchase our materials (wools, hides, silk) from the most highly-regarded suppliers who can provide the best possible traceability. Nevertheless, instances of animal cruelty can arise at any time, regardless of the supply channels. We do our utmost to prevent it, but unfortunately, it’s not yet possible to maintain full traceability along the entire production chain. We add ethical and quality-related clauses to our contracts with partners and suppliers to guard against animal cruelty. We’re also committed to stepping up our inspections and requiring additional guarantees with regard to breeding conditions and the treatment of animals. Finally, we refrain from using materials derived from animals if we are unable to obtain reliable and credible assurances regarding animal welfare.”

C’est ca. This is an honest assessment, and much better than brands who claim ethical superiority because they sell vegan leather and silk, but don’t say what that vegan textile is (plastic) or where it is made. If you’re curious, dive into the pros and cons of leather versus synthetic leather, and what cruelty-free fashion really means.

So, Can Sézane be Considered Ethical?

Ethical is a slippery term in the fashion world, and can mean different things to different people. But if you’re looking for a simple answer to whether you can feel good about buying Sézane products, I would say…. sure?

It’s hard to say if their factories are truly ethical or just doing the minimum. But, they’re certainly not a fast fashion brand. I like the path they are going down, and I love their transparency and charitable giving. Plus, their stuff is by all accounts very high quality and long lasting.

So buy something from Sézane if you love it and will wear it to death for many years, and you haven’t found what you want at any of the other brands I have gathered for you. They seem like good people who want to do the right thing. In fact, I might head over to the NYC store myself to browse!

What do you think about Sézane? Let me know in the comments!