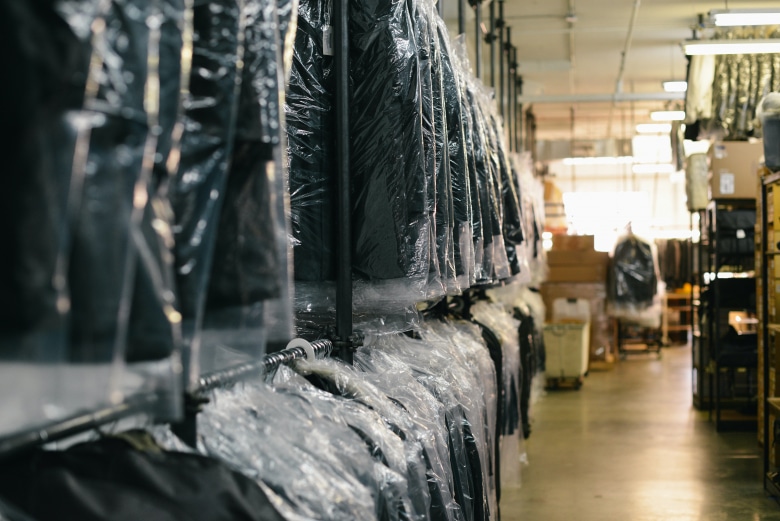 Hailed as a fun, accessible, and guilt-free way of experiencing fashion, fashion rental has been on the rise in the last few years in our increasingly sustainability-conscious world. Pioneered by platforms like Rent the Runway, there’s an ever-expanding list of new rental services appearing to offer us the coolest brands for a fraction of the retail price, such as HURR, Rotaro, By Rotation, Hire Street and OnLoan in the UK, as well as StyleLend, Nuuly, and Nova Octo in the U.S.

In May, The New York Times announced: Rental is Back, cementing the sector as an exciting solution to combat our cultural obsession with buying clothes. It was all looking up for the world of rental.

That was, until Finnish scholars compared and ranked five different clothing ownership models in Environmental Research Letters (ERL) which threw it all into question. It found that renting clothing had a higher global warming potential than resale, recycling, owning for an extended period (referred to as “reuse” in the report), or owning and then throwing the clothing away. The report prompted headlines like: Renting clothes is ‘less green than throwing them away’ and opened questions about rental platforms and their business models.

Let’s Look at the Assumptions

So what’s the deal, is rental sustainable or unsustainable? Well, as always, it’s not that simple. “Nuance is so important, especially in this space,” explains Maxine Bédat, the founder and director of the New Standard Institute, a sustainable fashion think tank that focuses on the importance of data and science to combat greenwashing in the industry. “Obviously the idea of rental sounds good, but we need to have more transparent information about the instances that it really is better, and when it may not be as good as we think.”

In the ERL report, the embedded assumptions used to conclude that rental was the least sustainable option are out of sync with how most consumers actually use rental platforms. The study looked at a pair of jeans: a garment that is fairly standard and so has an easily quantified impact, but is not typically the most sought-after rental category. It assumes the consumer rents a pair of jeans for a few weeks, and after ten uses returns the jeans to the clothes rental company and gets a new pair. In recent years, jeans have become subject to faster trends, such as block patches, over-the-top distressing, and a vast range of shapes, but for most people, they are a staple that are kept for at least a year. The International Fair Claims Guide for Consumer Textile Products gives jeans a life expectancy of two years, yet a good pair can last decades. Considering Rent the Runway has 115 pages of dresses to rent compared to seven pages of jeans (at the time of writing) it might have been more accurate to look at the impact of renting and returning trendy seasonal items such as dresses, sweaters, or vacation clothes.

The study also factored in 2 kilometers of driving to and from the rental company’s brick and mortar location, another assumption that could call into question the legitimacy of the report’s findings, given that most new-age rental platforms are digital-only and rental items are shipped to customers along with other delivery items, like public transportation for packages.

Deciding that renting is inherently unsustainable based on this report’s executive summary doesn’t give the whole story. Luckily, it goes into more detail in a way that lets us draw some more nuanced conclusions.

The researchers tweaked the report assumptions to create three different rental scenarios, which dramatically changed the findings. In the original scenario, it was assumed that the jeans would be worn 200 times in their lifetime. When increasing this to 400 times, and assuming the jeans were transported by low-carbon means like a bike or electric vehicle, they found that rental “can reach approximately the same level of GWP as the REUSE scenario” as long as the rental services were located close to consumers, and high-quality, long-lasting jeans were being rented. So, the sustainability of rental platforms is heavily dependent on transport emissions and sharing frequency.

Most fashion rental platforms have a noble ambition: to reduce overproduction and to combat throwaway fashion culture. By keeping pieces in circulation for longer than the average consumer would keep a garment, rental platforms aim to reduce the quick churn from factory to checkout basket to bin. In fact, a report by McKinsey and the Global Fashion Agenda found that renting extended the life of a garment by 80%, based on the average number of times it could be rented in its lifetime.

For many, being stuck at home during the pandemic with a stuffed wardrobe of unworn clothes led to a shift in perspective about what we own and how much we consume. The rise of the clothes sharing economy has coincided with the easing of pandemic restrictions, making rental an attractive alternative for post-lockdown celebrations. Rent the Runway reported a 92% increase of active users between May 2020 and May 2021, and is set to surpass pre-pandemic customer numbers by the end of the year. Unsurprisingly, bold prints, crop tops, neon hues and mini dresses are in high demand. In a survey of their members, the platform’s founder claims that 89% of members buy fewer clothes, particularly fast fashion, since joining Rent the Runway.

The fact remains, there is too little research done about the sustainability credentials of fashion rental, which means that the claims many platforms make could simply be considered greenwashing. “In the minds of most people, renting is sustainable. And that’s the fault of the brands that are pushing those messages,” Bédat says.

This is especially true for platforms that rent trendy clothing because it begs the question: What happens to that “It” dress in five years time when it’s not cool anymore? “I think those types of rentals are encouraging that type of [trend-driven] lifestyle, and that’s deeply problematic,” she says.

Let’s not forget the environmental impact of rental logistics. Transportation is a factor, because unlike a purchased garment, a rented one has to be returned, which increases the carbon emissions involved – even if the company uses carbon-neutral methods. It’s the same for packaging. A rented item is packed and repacked many more times than a purchased garment, increasing the amount of plastic wrapping and cardboard waste.

Another factor is dry cleaning, an energy- and chemical-intensive process. In the U.S., most dry cleaners use a toxic chemical called perchloroethylene (PERC) as a primary cleaning solvent. PERC is known to pollute the air, soil, drinking and groundwater, leading to a variety of health impacts, including cancer, reproductive issues and aggravated asthma for those working in the dry cleaning industry as well as the surrounding communities.

Not everyone uses rental platforms in the same way; for some people, it might actually encourage a higher rate of overconsumption. While some may rent a sparkly party dress for an event every now and then, other consumers may be simply increasing their rotation of new clothes.

“For my book Unraveled: The Life and Death of a Garment I interviewed a woman who was on Rent the Runway’s (now-defunct) unlimited plan, who said that she was so hyper trend-driven that it was the model for her,” says Bédat. “She lived in a small New York apartment and she didn’t have the capacity in her closet, so she was outsourcing her closet and getting new things to wear all the time.” Comparing this extreme end of the rental use spectrum with a shopper who invests in pieces that they plan to keep and rewear for years and “it’s hard to imagine that the research would demonstrate that the rental model is better than someone who is going to continue to wear it, not dry clean it every time it’s worn, and not have the transportation or logistics between each wear.”

The Future of Rental

Despite the question marks over rental’s sustainability credentials, consumer demand is only growing. What is needed is greater and more detailed research — rather than broad assumptions — to understand how people are actually using rental platforms in practice. “We need more data to know in which way the industry should evolve, what part of it should expand and what shouldn’t,” says Bédat. “We have to know the impact of dry cleaning, we have to understand how much of an impact the logistics part has, and the relationship to logistics and the use case of the garment.”

When it comes to research, she stresses that reports must be peer-reviewed and unambiguous. “At a minimum, be transparent about the assumptions that are being baked into these things before making grand claims,” says Bédat. As for the media’s clickbait headlines reacting to the ERL study earlier this year, she says “I think it’s fair to say: hey, rental may not be as sustainable as we think it is, but any black or white [statement] that doesn’t get into the nuance of it is problematic on the part of the media.”

So how can we rent our clothes in a more conscious way? By being aware that renting is not impact-free, and not all rental platforms are made equal.

There are plenty of players in the rental game who offer eco-friendly cleaning methods, carbon-neutral or negative delivery, reusable or recyclable packaging, and emissions offsets. In the UK, the rental platform HURR has partnered with RePack on reusable packaging, while competitor Rotaro uses carbon-neutral transport with logistics company DPD. Rent the Runway claims to have recycled 408 tons of plastic into a wood alternative, through its partnership with Trex. Many of these young companies also partner with social enterprises like Ecologi to offset a proportion of their emissions through tree plant initiatives.

More importantly, renting should replace only worse options, such as buying a new cocktail dress that you know you’ll only wear once or twice before it goes out of style. “We should think of renting like second-hand shopping,” sustainable fashion journalist and author Dana Thomas told the Guardian in July. “[It’s] not something we do all the time, instead of buying our clothes and swapping out outfits nonstop, but on occasion, when the need arises, like proms [or] weddings.” 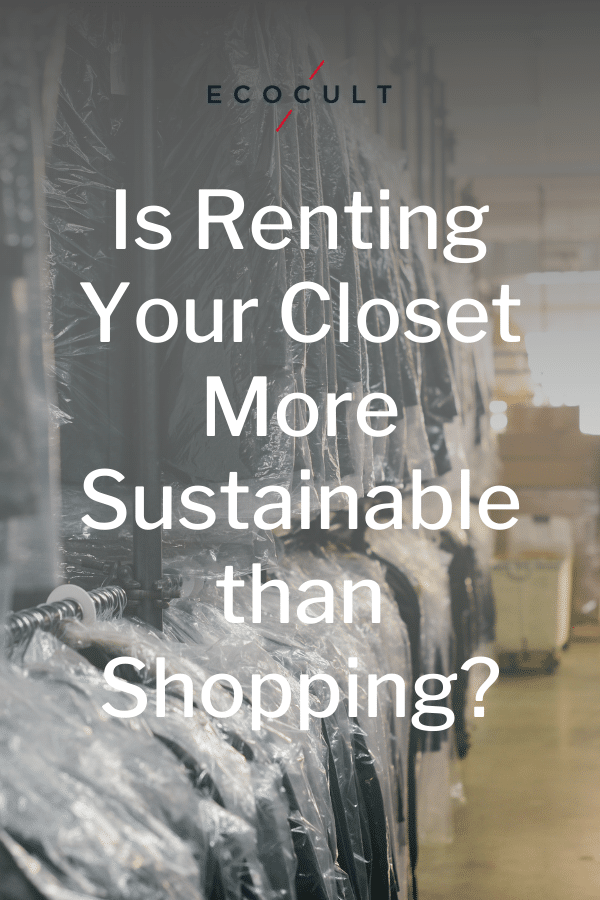 Our Top Picks for Ethical and Eco-Friendly Slippers

Our Favorite Ethical and Sustainable Wedding Invitations, Cards and Stationery