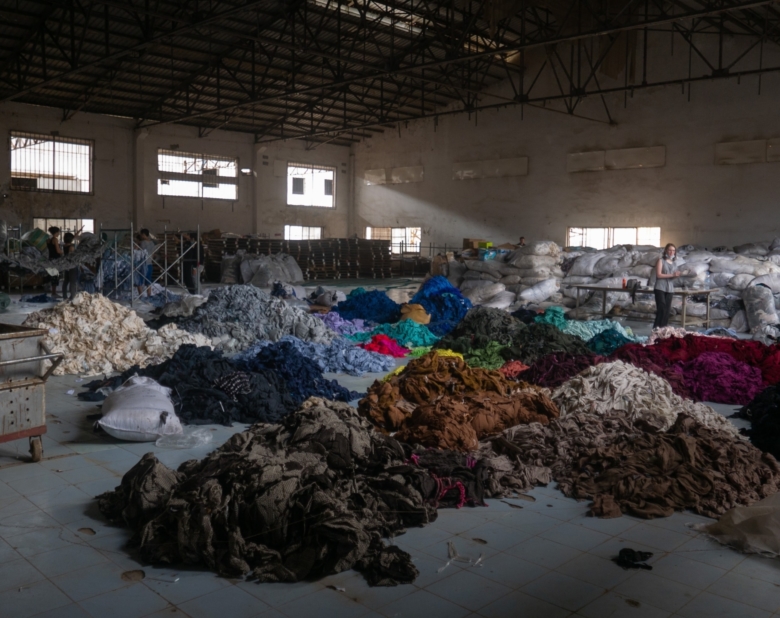 Conversations on sustainability in fashion tend to revolve around innovative new materials, zero-waste design, or the myth that we can consciously consume our way out of the climate crisis. But as the conversation evolves, more and more people are asking: Why don’t brands just make less stuff?

While it’s impossible to get accurate statistics, somewhere between 80 billion and 150 billion garments are produced and sold every year. Fast fashion is the biggest culprit. At the extreme end of the spectrum, you can often find thousands of items under ultra-fast fashion retailer Shein’s Daily New tab.

The fact is, fashion has to cut out rampant overproduction — and by extension, overconsumption — in order to pull back greenhouse gas emissions, reduce clothing waste and mitigate environmental degradation. There’s just no other way to do it, as shiny and exciting all these sustainability innovations and initiatives are.

Why does fashion overproduce?

To answer this question, we have to understand the bigger cultural and economic structures that enable fashion’s overproduction. “The driver is people with capital that are trying to make their capital grow by exploiting whatever opportunities come along,” explains Susan Paulson, professor at the Center for Latin American Studies at the University of Florida and co-author of “The Case for Degrowth.”

By “capital,” Paulson is referring to the richest people who use their wealth (capital) to invest in fashion brands. These shareholders (who are majority wealthy white men) demand sales growth from the businesses they help fund no matter the cost to society and the environment. “It’s driving designers, consumers, farmers, and everyone else to dance to this tune,” says Paulson.

Technology has slashed the cost of fashion production, as well as allowed consumers to peruse the internet for bargains, so brands are competing to have the speediest, cheapest, and most convenient offering. The only way to make this business model profitable for a fashion corporation is to make and sell millions of items. “It’s a race to the bottom,” says Natascha Radclyffe-Thomas, professor of marketing and sustainable business at the British School of Fashion. “We need to redress the balance,” she explains, so that people working in fashion aren’t “forced into that mentality where they’re flying around the world to save one penny, or blackmailing their factories.”

Offering added bonuses like free delivery and returns have only made things worse, she says. “The efficiencies of digital and delivery,” says Radclyffe-Thomas, “are the worst things that we could have done in this space because it’s causing people to buy, buy, buy.” So here we are, with consumers blithely buying and throwing away cheaper and cheaper clothing every year.

Pivoting away from this economic model would require a monumental rethink in how we define success, growth, and wellbeing.

Under a capitalist growth-driven economy, the most widely recognized measure of these criteria is GDP: Gross Domestic Product. The theory is that a higher GDP equals a more equal, happy and prosperous society. “That was never the purpose for the people that invented the GDP,” says Paulson. “They only said: Here’s the way we’re going to measure the number of goods and services that circulate in our economy. And some politicians, decades later, began to tell the story that the rising GDP meant rising happiness, wellbeing, and health.”

Radclyffe-Thomas adds, “GDP doesn’t talk about how the wealth is distributed, or how the wealth is created. So if you just say your measure of success is that GDP has grown or shrunk, that usually does not mean what you hope it does.”

It’s worth remembering that the fashion industry thrives off our insecurities in order to sell us more products. Fashion isn’t honing in on “people’s joy, but focusing on people’s fears, insecurities, doubts and self-hate,” says Paulson. “They make you feel out of date, dowdy, fat, ugly, not with the cool kids and feeling bad about yourself and that drives you to search on the web or go out and try new clothes. You’re perpetually insecure and feeling bad, that’s basically what makes you a good consumer.”

Essentially, brands release a salvo of perceptions onto workers, low-income people, and women in particular and force them into “feeling the need to buy new clothes to be acceptable.” She calls this phenomenon a “treadmill” where purchases are a means to convince oneself that they are “contributing to a happier nation.”

But in reality, it’s doing the opposite of making us happy.

How to Apply Degrowth to the Fashion Industry

Degrowth is an economic model centered around lowering consumption and production. It would reduce the energy and quantity of materials we use, and redirect our resources toward creating an equitable and healthy society. It may not sound like fashion can exist within this kind of system, but in fact, Paulson believes our relationship to fashion would actually improve without the pressure put on us by the fashion industry.

“I imagine a degrowth world where we get more happiness and joy out of clothing,” says Paulson. “Fashion can exist fine without constantly expanding growth.” She points to Amazonian societies that do not have money markets, yet, “Bodily adornment is a central, beautiful part of life that people put a lot of creative, intellectual and emotional energy into. That’s certainly not unique to capitalism or to an endlessly growing society.”

It will take consumers, governments, and industry cooperation to make a meaningful shift away from a consumption-driven to a degrowth economy. But it can be done — just look at the tobacco industry to see how education, taxes, and legislation can impact consumption rates. Among Americans, cigarette smoking hit an all-time low in 2018. “We had degrowth in tobacco in the U.S after long and hard campaigns to raise awareness of its harms,” says Sucharita Kodali, vice president and principal analyst at Forrester, a research and advisory firm.

There’s no single solution to replace the current consumption model. Our experts mention clothing rental, mending and making, fashion detox challenges like Remake’s No New Clothes pledge, buying secondhand and vintage, fashion made from textile waste, reselling, tailoring and swapping as more positive pathways for our relationship with fashion consumption. “I would say one is to widen the scope of possibilities, and I think that’s already happening,” says Paulson.

What About the Garment Workers?

But what about the people who make our clothes? After all, 84% of Bangladesh’s exports come from the country’s garment manufacturing sector. To shrink this would surely cause job losses and devastation for millions of garment workers.

“The garment industry,” says Radclyffe-Thomas, “has been an enabler for economies like China, Bangladesh, Vietnam, to industrialize.” In that sense, “there’s obviously a positive there.” But the jobs fashion creates in these countries don’t offer enough to live on, while poisoning local communities. Is $95 a month really worth the devastating health effects of toxic effluent and 14-hour workdays?

Paulson says that a degrowth economy could put the power back in the hands of countries that are dependent on the international fashion industry, so they can sustain their economy in a way that benefits their citizens. “The fashion industry depends on exploiting their land, their labor, their people, and vacuuming up all that value for the profit,” says Paulson. “There are all kinds of pathways, like using their own material and their own energy to pursue the path to well-being as their population chooses.”

A two-day drive north of Bangladesh by way of India is the landlocked country of Bhutan. It’s here that the degrowth theory has been put into practice with the implementation of Gross National Happiness or GNH. “It focuses on inner-contentment, peace, and non-attachment, rather than material comfort and fleeting pleasures alone,” writes Ritu Verma from the Royal University of Bhutan. “Collective happiness, concern and service towards others, and harmony with nature and all sentient beings, distinctly sets GNH apart from GDP and mainstream notions of development normally concerned with an individualistic and material sense of happiness, a hollow pursuit of perpetual growth, and narrowly defined notions of material progress.” In other words, Bhutan defines economic development more widely than just how much stuff its citizens consume.

Bhutan is the only carbon-negative country in the world, with environmental protection enshrined in its constitution. Similarly in Bolivia and Ecuador, the rights of nature have been protected by legislation since 2011 and 2008 respectively. In Latin America, degrowth’s counterpart is called buen vivir, or sumaq kawsay (meaning “good living”), both of which are rooted in Indigenous perspectives. Granted, these are countries with a smaller population than Bangladesh or India, but they prove that a degrowth economy is more than just aspirational or theoretical – it’s attainable, too.

Crucial to any meaningful systemic change is legislative action. “I think it will be very hard without government action in fashion – there are just too many cheap alternatives,” says Kodali. Indeed, if governments continue to offer tax breaks and subsidies to fashion brands, they will continue to be profitable. “We need more government intervention in both a positive and a punitive way,” agrees Radclyffe-Thomas. “If you think about Shein, they’re taking massive advantage of the fact that they’re not paying export duties and they’re not paying the import duties either, so we’re basically subsidizing bad business practices.”

Government cooperation is easier said than done, as campaigners have discovered in recent years. In 2019, the UK’s Environmental Audit Committee published an inquiry called “Fixing Fashion,” which was accompanied by 19 recommended actions the UK government could take to mitigate the industry’s impact. This included reforming taxation to reward companies that make clothing with a lower environmental impact, a proposed virgin plastic tax that would include polyester, taxing brands a penny per garment produced, which would be invested into sorting and recycling infrastructure, as well as banning the incineration and landfilling of unsold stock that could be reused or recycled. Sadly all of the committee’s recommendations were rejected in 2019.

Across the Channel, the French government has been steadily introducing laws like an anti-waste law that prohibits the destruction of unsold goods, and more recently, mandatory carbon labeling to help consumers make better purchasing decisions. Widely applied, these laws could make a huge impact on the industry and force fashion giants to produce less.

What Can You Do?

For the average consumer, these solutions can feel abstract and beyond our control. “I think it’s easier to apply it to yourself individually than it is to think about it as a nation,” Radclyffe-Thomas says.

But Paulson disagrees. She asserts it is “dangerous to convince consumers that we exercise politics by buying, and that’s it. Consumers also need to organize to demand that our government stop subsidizing [and] giving away free water, oil, and pollution,” says Paulson. “Please vote, advocate and protest that your tax money shouldn’t be subsidizing these companies.”

One thing is for sure, fashion can’t keep producing clothing at the current levels. Degrowth offers a framework to transition away from our growth-obsessed economy, but its success hinges on international collaboration, individual action, government and business accountability, and a sense of urgency. Can it really be done?

“We’ve been modern humans talking, walking around, and organizing ourselves for 200,000 years. This sort of capitalist exploitation and growth has only been around for a few hundred years,” says Paulson. “With a slightly larger historical vision, there are all kinds of alternatives. We have tangible reasons to say: let’s allow a different system to evolve, let’s stop propping up the old laws, and defending them so vigorously. If we allow new pathways to emerge, they will.” 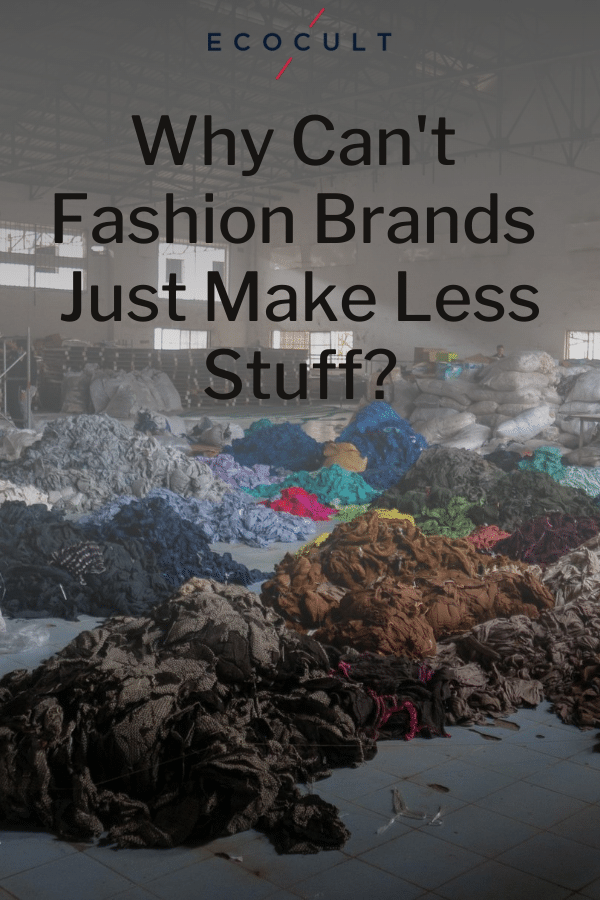 The Best Ethical and Eco-Friendly Brands for Activewear and Athleisure

Here Are Our Favorite Trendy and Eco-friendly Clothes for Teens