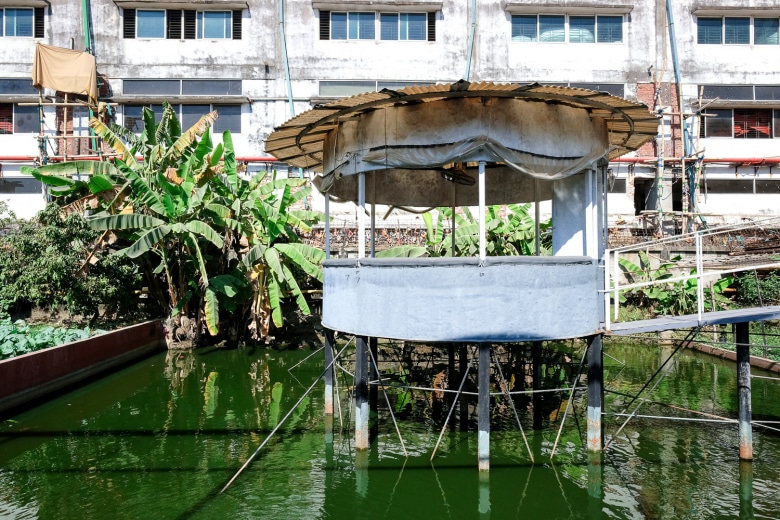 Image: A wastewater collection pond outside a factory in Chittagong, Bangladesh.

You know what, I’m just going to get right to the point here. Not going to bury the lede. Fashion, despite what is often reported by organizations such as the Ellen MacArthur Foundation, is not responsible for one-fifth of global water pollution.

The most accurate thing I can say on this subject, as far as I can tell, is that in 2011, the textile industry was responsible for a rough estimate of one-fifth of industrial water pollution in China, as measured through chemical oxygen demand.

It doesn’t have quite the same ring to it, does it?

Where Does the 20% Figure Come From?

Many years ago I looked into this statistic, and could only get as far as a 2012 paper in a journal I had never heard of, which attributed it to the World Bank. When EcoTextile News asked the World Bank in 2019 about it, the international organization denied it had come up with that fact. So where did it come from? Some have surmised that it was made up by a small company promoting its dyeing technology. But I think I actually might know where it came from.

According to a 2015 report by the NRDC (PDF), textile manufacturing was responsible for 20% of the industrial discharge of the total organic chemical load in China’s waterways. This report in turn relied on 2011 data from the Chinese government.

What is “total organic chemical load”? Simply put, it’s the amount of organic chemical pollution in a waterway. It’s often measured by looking at the total “chemical oxygen demand” or COD of a waterway, because decomposition of organic compounds requires oxygen. In heavily polluted areas, a high COD depletes the water column of dissolved oxygen, smothering and killing fish and other aquatic life in the process. (While water pollution can also be measured through ammonium, also known as NH4, all mentions of water pollution from here on out will be based on COD.) The report estimated that the fashion industry ranked third among all industries in China, after chemicals and paper manufacturing, for its 3 billion tons of annual wastewater discharge.

Another report by China Water Risk from around the same time said that agriculture contributed about half of China’s pollution, household waste came after. All industries together took up the rest of the pie, at 14% of COD water pollution.

That means, at best, the textile sector appeared to be responsible for a few percentage points of China’s total water pollution, despite China being the world’s largest producer of fashion. Fashion is 7% of the country’s GDP as of 2022.

But the whole world isn’t as fashion-focused as China. It’s fair to assume that countries that make a smaller volume of textiles will have a smaller portion of their pollution coming from fashion.

We could look at this another way. According to a report by the Global Fashion Agenda, in 2015, the global fashion industry consumed 79 billion cubic meters of water. But that represents only .87% of the world’s 9,000 billion cubic meters of water used per year. Seventy percent of global freshwater usage goes toward agriculture, which includes cotton, leather, and wool, but mainly food production. (Meat consumption accounts for 30% of the average American’s water footprint.)

That’s not to say it isn’t important to look at fashion’s contribution to global water pollution! Agriculture is incredibly hard to manage, because of all the smallholder farmers. (The ultimate cat herding task.) Household sewage, too, is very hard to get under control unless a government makes a huge effort to invest in treatment and infrastructure. But if you look at industrial pollution, even though it makes up just a portion of global water pollution, it would be much easier to pull a few levers and make a huge difference in the lives of millions of people.

“If you want to worry about industrial pollution, which I strongly think you do, then we do want to know textiles versus paper versus furniture making,” says Linda Greer, a Global Fellow at the Institute of Environmental and Public Affairs. She worked at the NRDC at the time of the report and is now fashion’s “go-to sustainability scientist.” “We actually really want to know this in order to properly focus priorities.”

But so far, I want to note that we’ve only been talking about textiles. When you think about how many sectors supply fashion, it gets way more complicated.

“It is very difficult to measure as you say,” Scott Echols, Senior Director at ZDHC, wrote in an email. “It’s also hard to say where to draw the line between sectors. Does shipment of textiles count as transport or against the textiles? Does the polymer and basic chemical production water use get counted against those industries or against the end product? Does leather water use fall under beef—or at least get double counted? All not well defined, I think, and subject to twisting the data to support the points one might try to make.”

So maybe, for now, all we could say with confidence is this:

Fashion, as measured through textile manufacturing, is an important contributor to global industrial water pollution, on par with paper and chemical production.

(Side note: Did you know paper production was that bad? I didn’t.)

How Would One Measure Global Water Pollution?

I just needed to ask what to me seems like an obvious question: How on earth would we accurately measure fashion’s global share of wastewater?

At the time of the 2015 NRDC report, China had a nascent regulatory system that could provide a very rough estimate. “But their environmental regulatory system was and in some ways is quite immature. The granularity of the information that they had was not really very good,” says Greer. “Nowadays, they know much, much more about what kind of factories they have, where they’re located, what their permits are.”

For places like Dhaka and Chittagong in Bangladesh, Ahmedabad and Tirupur in India, Ethiopia and Uganda, and Indonesia, how exactly would we measure fashion’s contribution to water pollution? According to Greer, their permitting systems are scattershot and difficult to access. In my research, I’ve found that water pollution is usually hidden. The pipes are buried underground and dump into the river in hidden locations under the cover of night. Or the chemicals are invisible and can only be identified with frequent testing. Boreholes are dug and dye sludge is dumped into them. The point source of water pollution would be hard to identify.

Do you think if a researcher went door-to-door in an industrial park with a clipboard, the managers would say, “Oh yes, we output so many thousands of gallons of untreated effluent a day. We in fact keep a record. Let me show you our books on this. Oh, and let me call my friend at the paper factory down the road; he can give you his numbers, too.” LOL, no, they wouldn’t.

But, actually, Greer says we could have at least a rough estimate.

“It’s not like you and I could do this over a weekend. But there is a way to do a reasonable estimate here, if somebody really wants to know,” she says. Let’s say you’re a graduate department or graduate student—you could have a pretty good estimate by looking at the various types of factories, what their discharge volumes are, which is usually in the permits, and then what the concentrations are that are allowed for discharge. [You would] have both how much pollution is coming out of this sector, and how many how much contaminants are coming out of the sector.”

“For a place like, let’s say, Cambodia, you would have to do an estimate,” she continues. “Like, we think X percent of this industry is sourcing there. Let’s just make some assumptions and come up with something. I think you could do it. It wouldn’t be great. But it would be better than citing a 10-year-old statistic over and over and over again.”

But, she says, “I’m not aware of anybody that’s done that work.”

So, fashion is not responsible for 20% of global industrial water pollution. Without doing the work that Greer suggests, a ballpark estimate puts it in the low single digits of industrial pollution, which excludes agriculture and sewage.

But there are so many caveats to these calculations that really, we just can’t know.

A Bad Statistic and No Silver Lining

Like the claim that we and The New York Times both debunked: “Fashion is the second most polluting industry after oil,” this figure seems to have made people sit up and pay attention. But to what end?

“I don’t know whether the number helps or hurts,” Echols writes. ZDHC, the global industry group devoted to reducing the fashion industry’s hazardous effluent discharge, has also searched for the genesis of this statistic and came up against the same dead ends. “It certainly puts textiles in the spotlight and helps move folks there. But if that is at the expense of the real problem then as a global community we’re probably not better off.”

In fact, it might actually be hindering progress. “People don’t feel like they actually need to know the answer, as long as they can keep falling back on an old statistic…then there isn’t a big drive to figure out a different answer,” Greer says.

Just take the ZDHC. According to a dozen different interviews I’ve conducted over the past year, the organization has done an excellent job of cleaning up the industry since its founding in 2011. It created a manufacturer restricted substance list (MRSL) and instituted an effluent testing program.

This bogus global figure had nothing to do with ZDHC’s founding. ZDHC was created because Greenpeace dropped a bombshell report focused on the pollution found in two rivers in China and flowing from the pipes of two factories. The reports were super specific, with transparent testing methodology and data.

The specificity and local nature of the data made them impossible to refute, and powerful enough to push us to where we are today, with the largest 200-some global fashion brands, several chemical companies, and dozens of factories all over the world testing and verifying that the effluent coming out of a large portion of textile mills and dye houses is pure and safe for people at the environment. While ZDHC certainly doesn’t cover the entire industry, its work has been lauded for starting this necessary process toward mitigating water pollution.

“Perhaps the better question to ask is whether we understand the local impacts of each industry,” Echols writes. “The average—even if it is 20%—is just that. Seems to me with all the focus on biodiversity, the real issue is watershed-scale impact, not what the industry as a whole does.”

Measure local, act local. I like the sound of that.

Waste Not, Want Not: Why We Love These 12 Eco-Friendly Made-to-Order Brands