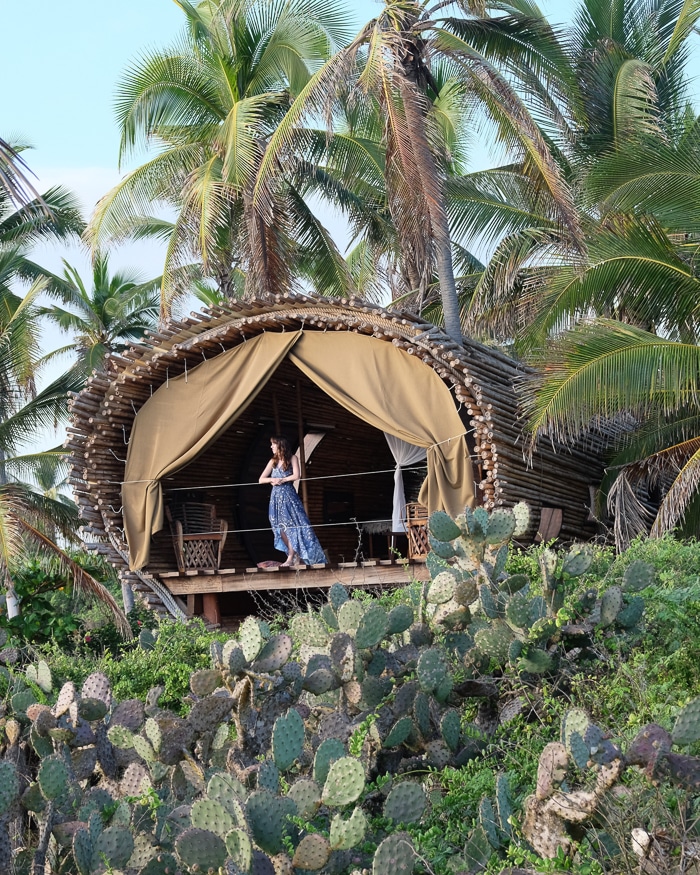 A friend messaged me a few months ago saying he wanted to propose to his girlfriend. Did I have recommendations for Tulum?

“Noooooooooooooooo,” I wrote back. Tulum is fun for a party or to see some friends, but it can also be crowded, overpriced, and frustrating. Plus, there is a stunning amount of greenwashing going on. Knowing that his girlfriend is an ocean lover and cares deeply about the environment, I told him he should instead bring her to a small eco resort near Zihuatanejo, Mexico called Playa Viva.

He took my advice! And, well, I’ve been seeing both their Instagram pictures, and I think he appreciated my suggestion, because she was overwhelmed with emotion (in a good way) as soon as they arrived. And he hadn’t even popped the question yet. He messaged me his thanks after she posted a picture of her ring in front of the ocean, and then emailed a longer thank you note when they got back to Brooklyn. Mission accomplished.

That’s because Playa Viva is so tranquil, romantic, luxurious, yet conscious, that I knew that it would be the perfect setting for his secret plans. 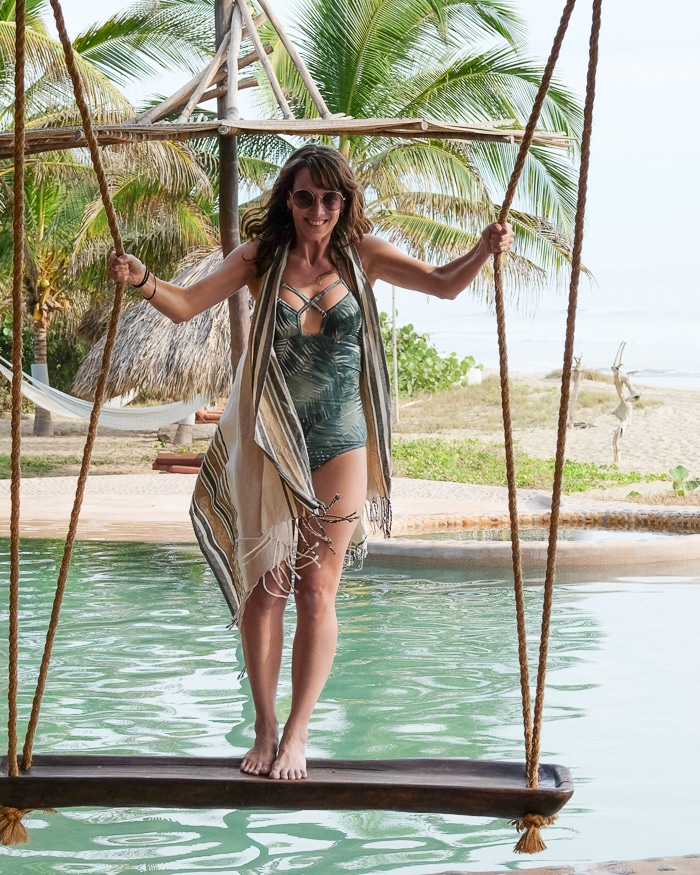 How We Discovered Playa Viva

We were happily hanging around Mexico City in December, enjoying the cuisine and architecture, when I fell down a rabbit hole on Instagram of baby sea turtle pictures. That led me to the account of a small eco resort near Zihuatanejo on the Pacific Coast of Mexico called Playa Viva. Then, I saw pictures of the resort itself. Within the week, I had booked us a 1-hour 20-minute flight to the coast.*

Playa Viva sent over a welcome kit, which including a packig list and supplies we could bring to donate to the local school kids. A taxi was waiting to pick us up at the airport for the 45-minute drive to the resort. After watching nothing but trees and tiny towns flash by, we turned down a gravel road as migrating ducks flew overhead. It took another ten minutes, past a small farm and tropical trees, before we pulled into a clearing. A fluffy dog name Perro Viva met us, and as we got a tour of the resort, she followed along, and decided to hang out with us as we unpacked and marveled at our beautiful eco casita. As far as we could see, there was no one on the white sand beach that stretched out on either side of the small resort. The sun was dropping down to the water, previewing what would become a luscious sunset that we could watch right from our bed.

We had arrived to the most romantic and sustainable resort on the Mexican Pacific coast. 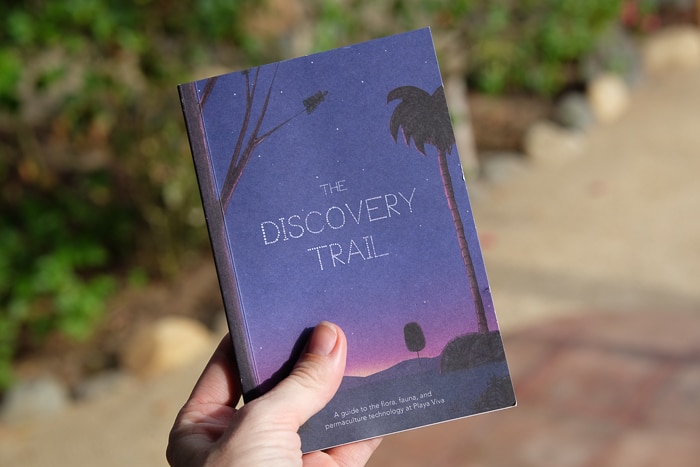 Beyond Eco-Friendly to Restorative

The area around the Mexico resort Playa Viva looks to the eyes of a tourist to be untouched and idyllic–a white-sand beach lined with palm trees where you could walk for an hour and not see another soul–but it’s a far cry from the lush native greenery that used to be there. In the 1920’s, the government encouraged a slash-and-burn policy to turn the land into plantations of non-native coconut palms. The formerly rich rainforest land deteriorated, lagoons dried up, and mangroves disappeared. The native badger population, relieved of big cat predators and feasting on the coconuts, exploded, and then turned to ravaging sea turtle nests.

When Sandra Kahn and David Leventhal bought the land in 2005 that would become Playa Viva, they set into motion a long-term plan to bring the land back to its forgotten biodiverse glory. They’ve planted 10,000 native trees on the property, installed an organic permaculture farm, set up an organic farmer’s market in the community, replanted mangroves, re-dredged the lagoon, and even provide financial support to a sea turtle sanctuary a few steps down the beach.

And this was all while building and running a luxurious, all-inclusive resort. It’s 100% solar-powered, with the greywater going to the garden and the the blackwater being responsibly treated before going through the final round of natural filtering in the mangroves. The soap in our shower was handmade at the resort, as was the coconut oil for cooking and massage. And amber lights ensure that sea turtles aren’t confused if they haul up on the beach to lay eggs.

Far from roughing it, we spent our days practicing morning yoga, then sipping basil margaritas and eating healthy Mexican fare by the saltwater pool. In our room was a richly illustrated mini guidebook that we could bring with us on a self-guided biology walk from the resort to its organic farm. 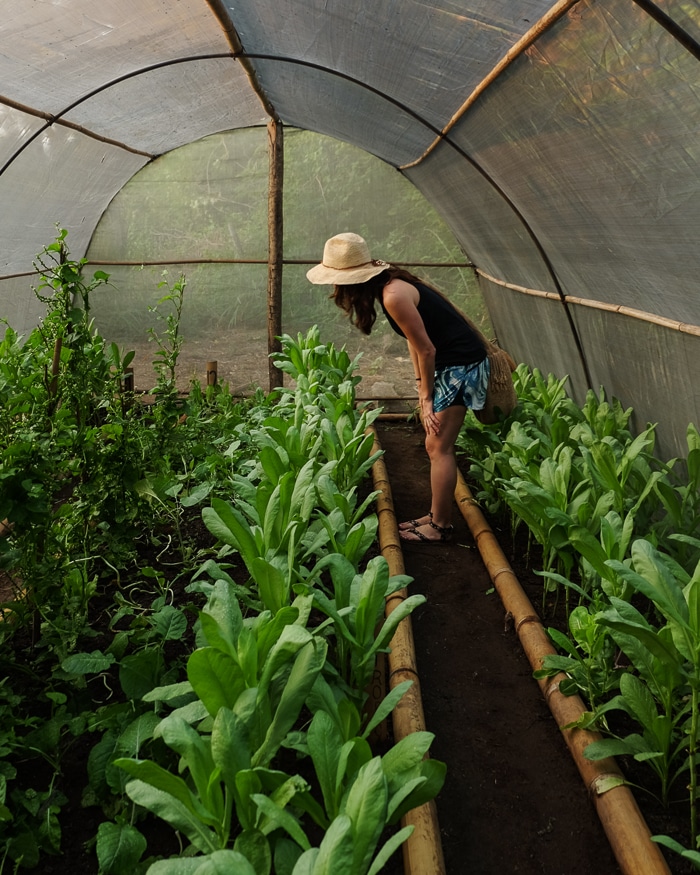 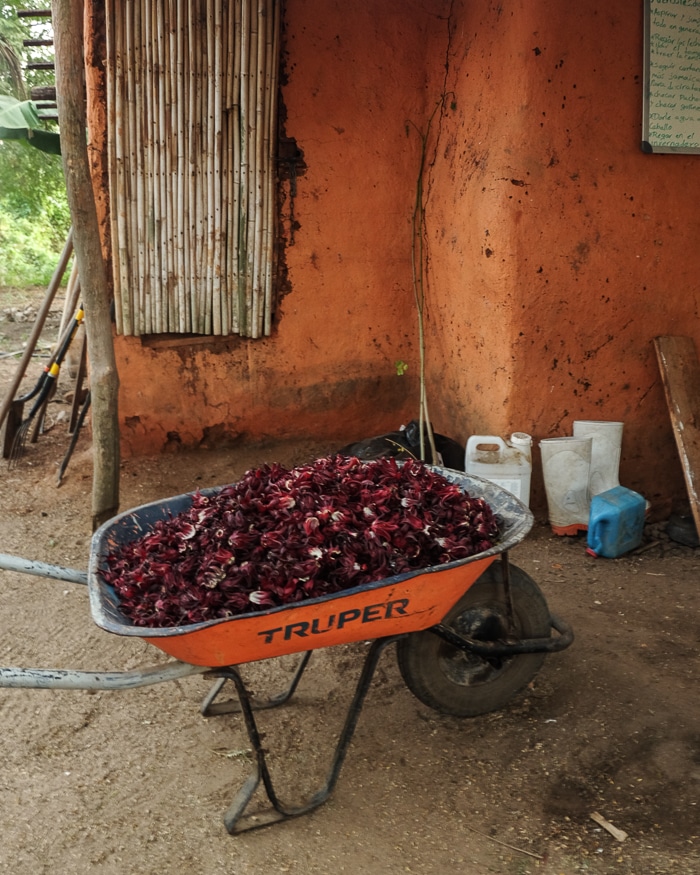 One afternoon, a farm intern, Kiera, brought us out to meet the farmers, and check out the hibiscus harvest and the greenhouse. Playa Viva’s farm includes basil, kale, beans, clover cover crop for salads, cabbage, arugula, cactus, lettuce, arugula, cacao, papaya, moringa and neem (both good for hair and skin), and chickens for their eggs. All this is sold at their farmer’s market and used in meals (and cocktails) at Playa Viva. 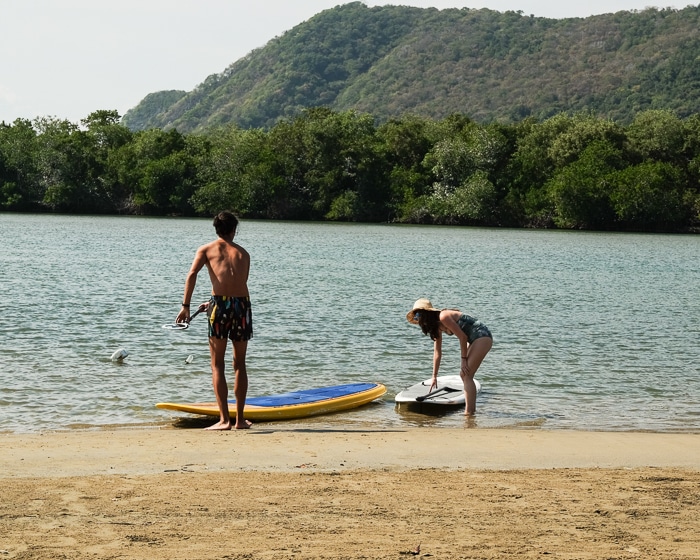 There was also a long list of potential activities we could partake in: visiting a tiny self-sufficient family chocolate farm in the mountains and having lunch with the family, a traditional Mexican temazcal aromatic spa ceremony, paddleboarding, scuba diving and snorkeling, visiting an archeological site, surfing, and more. One day we went paddleboarding for an hour through the mangroves, and had them completely to ourselves, except for one man spearing fish to sell to local restaurants. Another day, we tore ourselves away from the resort to visit the local coconut candy factory and 300-person pueblo with an employee who grew up in the area. The coconut candy was tasty, but what was more interesting was to hear about the employee’s story of trying to immigrate to the U.S. twice, and the hardships he had endured, before returning to his hometown to work at the resort. He even swung by his son’s birthday party with us, and we each got some birthday jello.

But let’s be honest, we were there for the sea turtles. 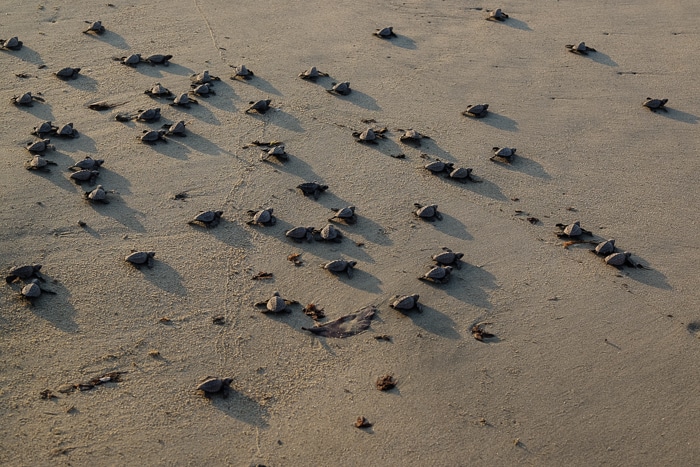 One night, the sea turtle biologist from the sanctuary arranged for us to go out with the local volunteers looking for fresh turtle nests. The locals have traditionally eaten sea turtle eggs, but now they are paid a stipend in food baskets to scour the beach for fresh nests every night. When they find a nest, they carefully dig it up and transfer the eggs to the sanctuary, where when they hatch, they will be protected from dogs, birds, badgers, and people until they can be shephered out to sea. We didn’t find any that night, and we were getting worried. Sea turtles come in year round, though it was low season. But four weeks earlier, one of the ATVs had been broken, so no sea turtles nests had been rescued. It takes about four weeks for a nest to hatch, usually before dawn. Would a nest hatch while we were there? We told the staff to wake us up at dawn if there was a hatched nest.

On our final morning, we woke up at eight am and looked at each other. No turtles. Then, we heard the sound of an ATV, and the yoga instructor Angela shouted for us from the path outside our casita. We rushed to the beach, and found a volunteer with a bucket full of baby sea turtles!

We received instructions, which were: 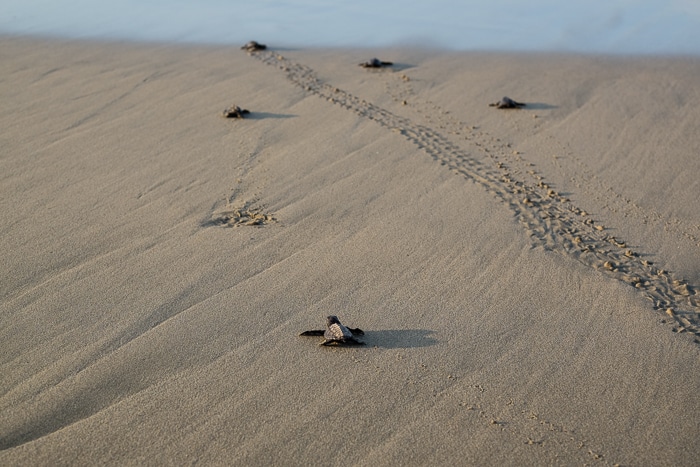 They tipped the bucket onto the sand, and dozens of turtles bravely made their way to the ocean. Only one out of 1,000 to 10,000 baby sea turtles will survive long enough to mate. So they could use all the help they could get. 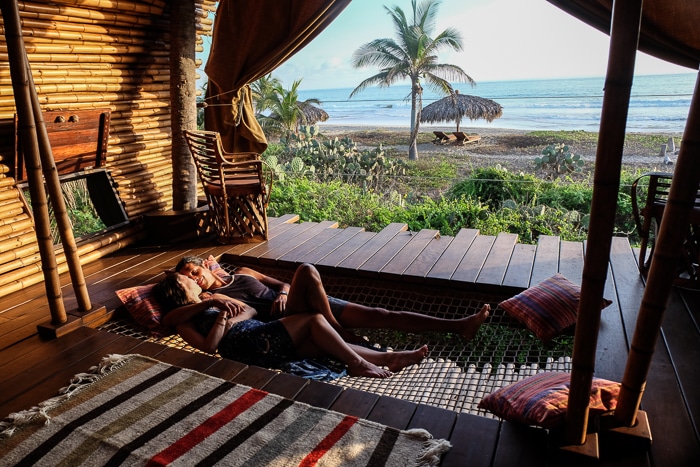 If you’re coming from the U.S. to Playa Viva, you might want to do what our friends did, which was have one night in Mexico City eating at some of the amazing farm-to-table restaurants there, and then fly out the next morning to Zihuatanejo. Or maybe you don’t want to go to Mexico at all?

Playa Viva’s owner, David, has founded a collective of eco-friendly boutique resorts in Central America that share a goal of going beyond sustainability to being regenerative, called Regenerative Resorts. When my husband and I were looking for a thoughtful but luxurious place to stay in Granada, Nicaragua, I found a tiny eco resort occupying its own isleta, or tiny island, in Nicaragua’s lake, called Isleta el Espino (my review). And what a coincidence, it’s also a Regenerative Resort! 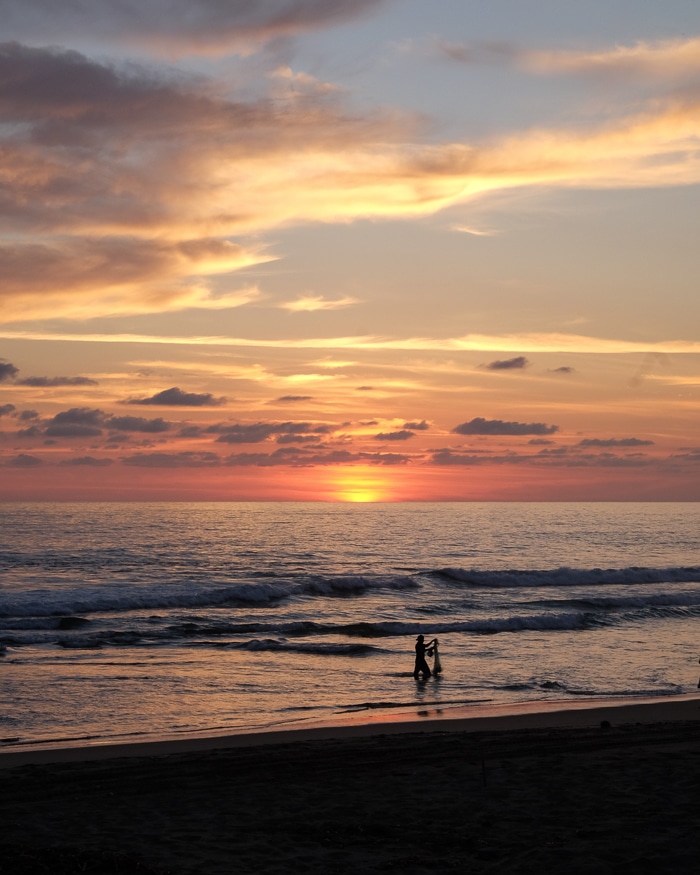 Then, I was researching farm-to-table restaurants in Playa Maderas, the upscale neighbor to San Juan del Sur in Nicaragua, because we are meeting friends there next week, and I found Morgan’s Rock, with it’s own organic farm. You guessed it: also a Regenerative Resort. There are more in Guatemala, Belize, Jamaica, and even north of San Francisco.

It seems that we conscious but discerning travelers–a growing demographic–could spend a lifetime only going to Regenerative Resorts and be quite happy.

*Playa Viva offered us a free stay. Regardless, everything I write here is the truth (yes, all the gushing is real), and I really did recommend Playa Viva to my friend, knowing he and his now-fiance would love it!

Where to Get Authentic Huaraches That Are Ethical, Low-Waste, and Sustainable-Sourced