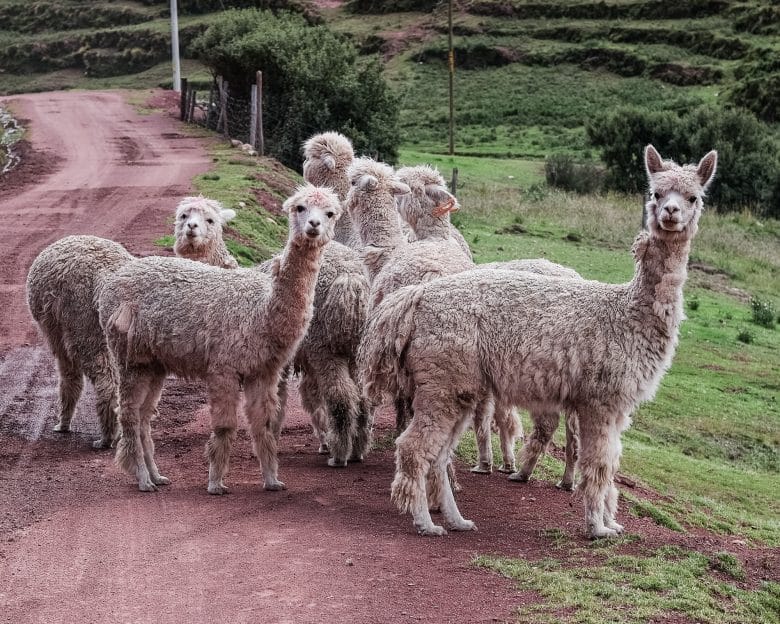 When we set out for the Rainbow Mountains outside of Cusco one chilly morning in March, our tour guide told us that we could ask our driver to stop whenever we wanted.

I took him seriously. ‘Stop! Stop stop stop,” I yelped an hour into our drive as we drove down a lonely road in a green valley flanked by low mountains. I had seen an alpaca.

A baby alpaca, to be more precise. We pulled over, and I jumped out of the car to take pictures of a mama and baby alpaca. A farmer came out of his house, and invited us to pick up and hold the baby alpaca, while the mother made Marge Simpson-like concerned noises. Eventually, I put the baby alpaca back down unharmed and we got back in our car and drove on.

We turned off onto a gravel road, passing an Andina woman pushing a baby in a wheelbarrow, and a man driving an alarmingly stubborn bull ahead of him. I spied several alpacas climbing a steep alpine slope, so I made the driver stop the car so I could take more pictures. We came around a switchback and found ourselves face to face with a whole herd of alpacas wandering across the road. And then vicuñas, the alpaca’s luxury cousin. What luck! I popped out of the car to take more pictures. Almost every single alpaca we saw, except for the first mother alpaca and her baby, was wandering completely free through the wilderness, munching on whatever caught their fancy, free of boundaries or fences. 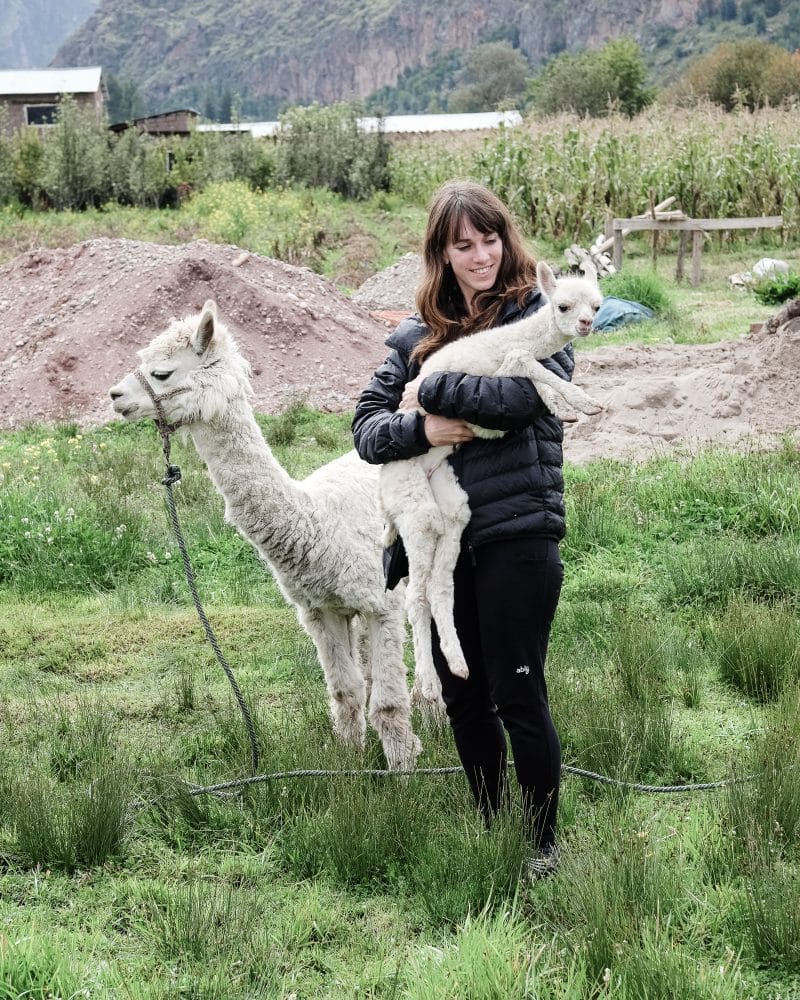 We were running behind because of my alpaca enthusiasm and our guide was starting to get a little nervous. We turned another corner, and in front of us was a v-shaped valley stretching off miles into the distance. There were hundreds of alpacas and llamas and vicuñas scattered across it, as if a giant hand had spilled them carelessly across a shaggy green carpet.

So. Many. Alpacas. I stood with my mouth agape and my camera by my side. And I laughed. Our guide must think I’m ridiculous! I’m basically doing the equivalent of asking him to stop every time I saw a cow in Texas. But I couldn’t help it. I had read so much about alpacas as a conscious fashion consumer. And now here they were in front of me, in all their fuzzy, hooved, gentle glory.

Why I Love Alpacas

Alpacas are part of a family of four South American camelids. (Yes, they are cousins to the camel.) The most well-known one is the llama, which produces a somewhat coarse fiber. There’s the vicuña, which almost went extinct in the 1960s, but has staged a comeback and now produces a luxurious fiber that is finer and way more expensive than cashmere — think a $20,000 coat! The guanaco is mostly in Argentina, and his hardly known at all. But the alpaca is by far my favorite.

Obviously, they are incredibly photogenic and friendly animals. Just look at that face! But they are also my favorite in terms of fashion. Not only is baby alpaca (the softest part of a full-grown alpaca’s coat) just as soft as cashmere, an alpaca sweater is more durable than a cashmere one and is less likely to pill, while comparable in price. .

And cashmere just isn’t what it used to be. It’s been well-known for almost a decade that the Chinese are flooding the market with cheap and low-quality cashmere . Cashmere goats, who are not native to Mongolia, are overgrazing the land, leading to desertification, and threatening other species such as wild horses, snow leopards and antelope. 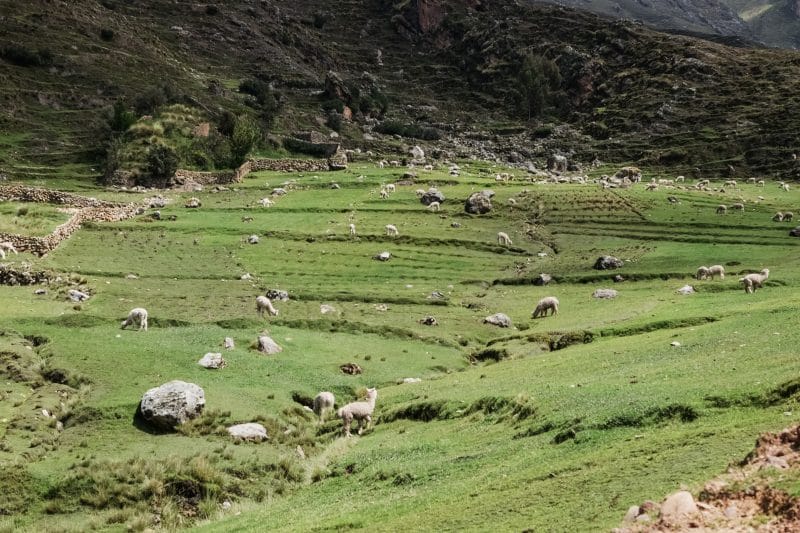 But alpaca wool doesn’t come with any of those concerns. They spend their entire lives roaming freely in their native habitat, the Andes mountains, where they fit right into the ecology. And they’re not killed for their wool, either. They’re caught by the farmers and gently sheared. It’s similar to when you bring your pet to the vet.  They might be nervous and dig their heels in and have to be restrained, but they’re not harmed. Afterward, they are released back into the wild. Because they regrow their wool, which can come in 20 different colors, from white to coffee brown and even orange, it’s in a farmer’s best interest to let them live as long as possible. It’s also healthy for them to be sheared, because if their wool grows too much, it can impact their quality of life.

Some farmers put tracking collars on their alpacas, and go to collect them when they’ve died a natural death so that they can be used for food for locals, and their fur can be sold to artisan brands and made into fluffy ethical and sustainable pillows and shoes. I actually ate alpaca twice in Peru, once at a healthy and delicious farm-to-table restaurant in Cusco, and once at the home of an indigenous family in the community of Chari.

In 2020, PETA released what they deemed an exposé of alpaca abuse. It was filmed at the largest alpaca farm in Peru, which is owned by a European family. And what it shows is nervous and scared alpacas being roughly sheared. If you don’t like the video, then let’s talk about shifting production to indigenous farmers and giving them a better price so production can be slowed down. The answer is not replacing alpaca with acrylic.

Alpacas are incredibly important to the indigenous descendants of the Incas, culturally and economically. Peruvian alpaca fiber exports reached $68.3 million between January and November of 2017, double the year before. With 80% of alpaca fiber worldwide being produced in Peru — and 85% of the alpacas in Peru raised by smallholder (indigenous) farmers —  when you buy something made with alpaca wool, you’re probably supporting a Peruvian alpaca farmer, and you are definitely wearing an eco-friendly and beautiful material, even if it’s from an alpaca farm somewhere else in the world.

When I came across Arms of Andes, I got so excited. This is the only activewear brand I’ve found so far that uses alpaca, and I am so here for it because of the potential that alpaca wool has in terms of high performance. Because of the way alpacas have evolved to live in such high altitudes, their wool easily adapts to changes in temperatures, which means it’s great for hiking and other outdoor adventures. It’s also naturally odor-resistant, moisture-wicking, wind-resistant, and more.

Arms of Andes was started by a brother and a sister who were brought up in the US in a Peruvian household. As children, their parents would take them to Peru and teach them about Peruvian history and their ancestors’ sustainable lifestyles, which eventually inspired them to start a sustainable apparel brand using alpaca wool.

The wool Arms of Andes uses isn’t just any wool though—it’s Royal Wool. Compared to Baby (which doesn’t actually come from a baby alpaca) and Superfine wool, Royal is the finest and most luxurious—and only about 1% of exported Alpaca wool is royal. This is why Arms of Andes clothing feels so much softer than other wool clothing you might have tried.

Where To Find Alpaca Fashion

Wondering where else to get your hands on this wonderous fiber? Well, once you start looking, you’ll see alpaca made by BIPOC communities is everywhere! Check out these alpaca sweaters, ponchos, hats, mittens, socks, slippers, and even a beautiful and fluffy toy. 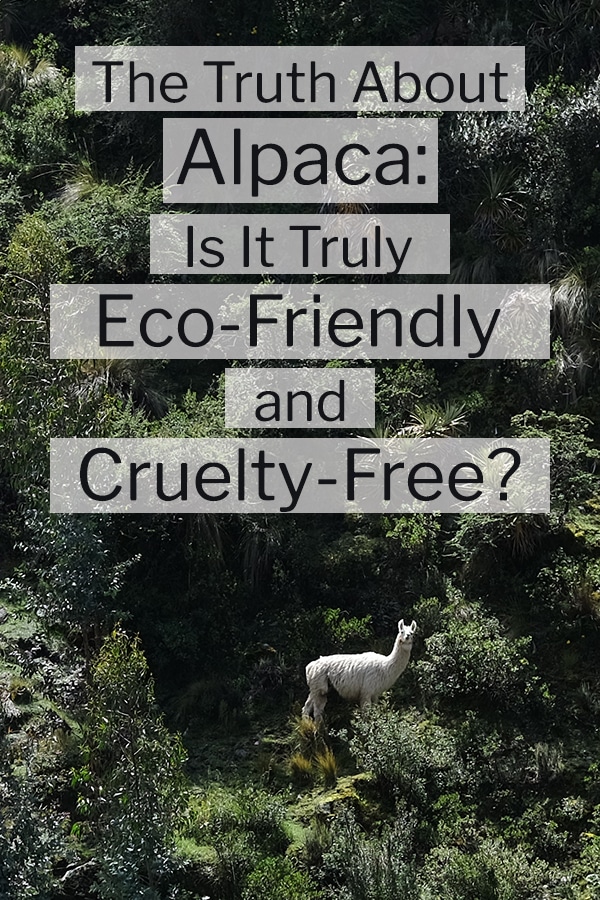