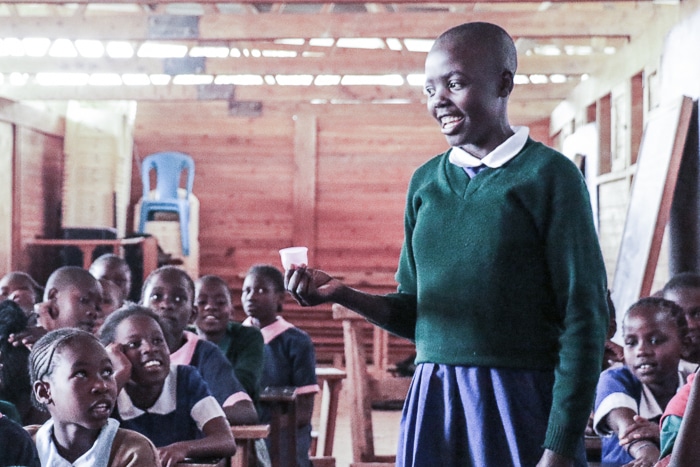 Have you ever thought to yourself, “Man, this menstrual cup is amazing. All women should be able to use this!” Well, there’s a company trying to make that a reality.

Ruby Cup, founded in 2011 by three friends who met while studying social entrepreneurship at their University, aims to provide menstrual cups and health education to girls in developing and impoverished nations. Utilizing the One for One model, made famous by TOMS, they are not only empowering women, they are doing so in a sustainable way.

As a healthcare provider myself, I understand that education is imperative to the empowerment of your own health. Ruby Cup also shares in this mentality, as you will see from my conversation with Julie Weigaard Kjær, one of the three founders, who chatted with me via Skype from Kenya earlier this month where she was distributing and providing education about the menstrual cups.

Julie (Ecocult): What made you interested in menstrual cups? It’s a unique niche – as opposed to fashion or general healthcare.

Julie (Ruby Cup): My co-founder was already using a menstrual cup when we were studying at University, and she had to create a social business plan for class and she made the link. After myself and our other co-founder used it for two months, we thought, “Oh my Gosh, why have I never used this before?” Once we delved further into the research we realized what an immense problem it is in the world, and we simply weren’t aware of it. That is a big task too, creating the awareness. It isn’t that people don’t want to help the issue they just simply aren’t aware it exists and don’t think about it regularly.

What spurred the name Ruby Cup?

Menstruation is often seen as shameful and there are a lot of taboos surrounding it. Despite it being an extremely natural and important process, it’s not something women like to talk about [in Kenya], and in the Western world. We came up with “Ruby” to portray it as something to treasure, like the gemstone.

I like that analogy! How did you decide on a One to One business model?

It actually stemmed from the failure of a previous business plan. We had intended on a sales model where local women would be educated on the product and sell to other women in their community, thus they would be able to make an income. After 6 months, and recognizing our intent of Ruby Cup was to be a sustainable product, it simply wouldn’t work. Once that woman sells to a customer, because of the sustainability factor, she loses that customer. We also came across much resistance with older women in the communities that had been using rags and cloths their entire life and did not want to change. They expressed that it was their daughters who did not have an income being young still, that really needed our help. So, we adopted the One for One model, where we sell Ruby Cups to women in Europe and the U.S. that could finance the women in countries that cannot afford it.

The women must have access to clean water, correct?

Yes, it was a major concern of ours from the beginning. It is actually the most reusable product, in comparison to rags and reusable pads, that uses the least water. It requires access and education of handwashing and 0.5 liters of water per month where you boil the cup in water to disinfect it.

I’m surprised you can boil it! What is it comprised of that makes it not break down from boiling?

It’s 100% medical-grade silicone. The silicone is actually extracted from sand, so it is quite abundant, and even when you dispose of it after much use, it doesn’t create an environmental burden.

Where do the girls dispose of menstrual waste, if you will?

Normally, if it’s not an actual toilet, it’s a hole in the ground. As long as the women take it out after washing their hands, dispose of the matter, then reinsert it, it is OK, because it is only coming into contact with their already clean hands. Of course after, they must wash their hands again.

How did you start in Kenya?

We came across a study in Nairobi, Kenya, regarding menstrual cups, probably one of the first studies conducted using these products. It studied 50 women followed over 2 years, and although it contained a small sample size, 97% of the women said they would buy and use menstrual cups, so we saw the need in this country and decided to go there.

What education is necessary for Ruby Cup to continue when you aren’t there?

That’s the most important thing, that our efforts are sustained and there is someone there to take on the lead after we leave. The education and distribution of Ruby Cup is a big part of the whole process, but the questions arise when the girls start to use the cups for the first time, and we need to ensure a long term focus and that there is support staff, whether it be teachers in a school, or organizations on the ground. We also have our trainers that are based here in Nairobi to go and follow up with the girls. In boarding schools with communal kitchens, for instance, we work with the teachers to figure out a space that the girls could boil their cups, or in the urban slums, there is often a barrel of water for handwashing available. There isn’t a one stop solution, it’s something we look at each time we are introducing this to a new community. Truthfully, if they don’t have access to clean water, the first thing they need is not a Ruby Cup – it’s the access to clean water!

How is Ruby Cup looking to improve the environmental impacts humans have had on our planet?

We haven’t measured our own environmental impacts yet, but we have learned from other studies that a woman uses about 12,000 tampons or pads in her lifetime, so if you calculate that with every menstruating woman in the world, the waste disposables creates is unimaginable. A Ruby Cup is one product and lasts 10 years. It’s free of chemicals, there are no perfumes or absorbency gels that tampons and pads typically have that aren’t healthy for the environment; it is simply 100% silicone.

Wow! 12,000 tampons and pads in a lifetime. So, at what age group do you start introducing Ruby Cup?

From about 12 to 13 years old, which wasn’t based on a rigorous study, it’s just an age we picked based on our conscious. We couldn’t go to a nine year old and tell her to use this device that she has to insert. They have to be a little older and more mature to grasp the concepts.

Do some of the girls have older sisters that have taught them before they were formally educated on Ruby Cup?

I don’t know specifics about sister to sister, but a few of the girls have told us they have introduced it to their mothers. At that time, we were selling it in the markets in Kenya for a standard retail price of $20, and one of the mothers went out and bought one. For that woman and family, $20 is a significant amount to spend, so it shows the mother really saw it as a need.

Have you seen the impact you are making yet in terms of empowering the women you are educating?

Yes, we have seen it in many different ways. One way is simply by educating them on the female anatomy, how and why they menstruate, and personal hygiene. I met one girl who had been menstruating for 2 years, and she thought she was sick and going to die, so the knowledge is really empowering. There has also been this trickledown effect where the group of girls we originally educated are now educating and helping the girls younger than them.

It really is remarkable, it only takes one person to create this cascade and snowball effect.

It has been such a positive effect! One of our partners, here in Kenya, has reported that several more girls have graduated primary school and are continuing on to secondary school. I don’t want Ruby Cup to take all the credit for that, these girls have many, many other issues and hardships thrown at them, but it is definitely a part of it. We help build self-esteem, control over your body, and have helped increase school attendance.

Have you expanded the education to men?

Not in the actual education sessions. We want to create a safe space for these girls, where they can ask their questions comfortably. When we have been in rural areas, it is important to include the chiefs in our efforts, who are often males. A question men are asking us is if their daughters will now become sexually aroused when they use it. To you and I, the answer is clearly no, but they truly don’t know and are worried and the value of our education is evident there.

How does the distribution process function?

We’ve been fortunate to have three selected donation partners in East Africa that receive the free cups and we have capacity to choose a fourth one, which is great, because it means there is more demand for the cups. We also sell wholesale to NGO’s (non-governmental organizations) that go through a screening process to ensure they have the means to distribute the cups.

Learn more about Ruby Cup, here and help ensure females worldwide, view their body as something to treasure.