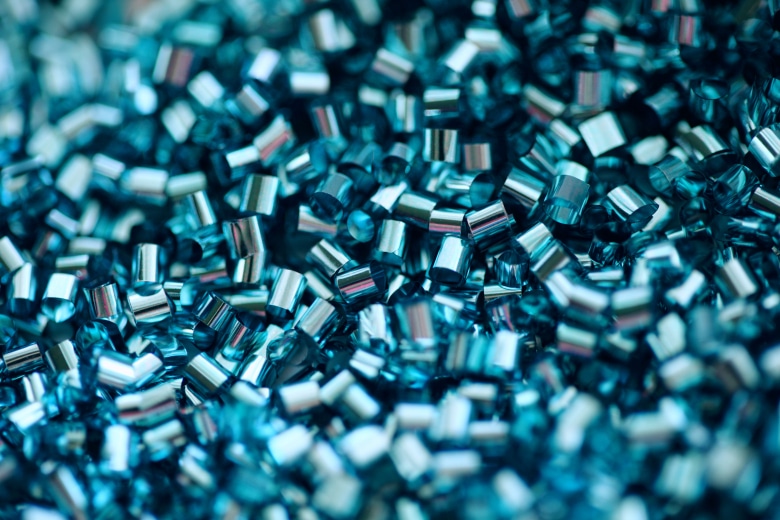 In recent years, the fashion industry has been keenly experimenting with bioplastics: a small but rapidly growing market that is aiming to make fossil-fuel fashion a thing of the past. You may already have sneakers with bioplastic soles or sunglasses made from bio-acetate. In the not too distant future, you may be sporting a bio-based sequined dress or a faux fur coat.

Currently, bioplastics represent only around one percent of the 791 million pounds of plastic produced in 2019. But by 2024, the bioplastics market is expected to increase by 36%, fueled by an urgent need to divest from fossil fuels, the most common feedstock for plastics.

According to BP’s Statistical Review of World Energy 2016, there’s just under 50 years’ worth of oil left on earth. In order to keep global heating below 1.5 degrees, by 2050, 60% of oil and fossil methane gas and 90% of coal has to stay where it is: in the ground.

“In the last few months since COP26, there’s been a climate fervor that has just grown and grown,” says Paul Foulkes-Arellano, founder of the circular design consultancy Circuthon. “People don’t want to use fossil fuels anymore, which means that they’re turning to bioplastics.”

As the appetite for bioplastics grows, it’s worth asking whether this “green” alternative to petroleum-based plastics really is as good as it sounds. Are bioplastics the answer to fashion’s plastic problem?

Bioplastics are made by swapping petroleum for a natural, renewable feedstock. The most common feedstocks on the market include corn, sugarcane (which are fermented to produce polylactic acid or PLA), sugar beets, and castor beans, which are known as first-generation feedstocks. Second-generation feedstocks come from waste materials, and the third generation comes from non-food sources like algae and bacteria. One example of the third generation type is Bloom by the Mississippi-based company Algix, an algae-blended EVA, or synthetic rubber.

Bioplastics fall into two camps: drop-in or new materials. Drop-in bioplastics are essentially a direct replacement for petroleum-based plastic and can be incorporated into existing manufacturing systems, while new materials have to be made and recycled in purpose-built factories. The latter is more expensive and difficult to use, for obvious reasons.

“There are many conventional plastics that can be made as bio-based versions, and they’d have exactly the same application,” says Dr. Ashley Holding, a chemist and the founder and principal consultant of Circuvate. “You can use a bio-based EVA,” ethylene vinyl acetate, “foam to replace petroleum-based EVA foam. “It’s the same material, but it’s coming from bio-based feedstocks.”

Who is using bioplastics in fashion?

While many types of bioplastics are in their early stages of production, there are a few notable uses on the market. In 2018, Brazilian petrochemical company Braskem partnered with footwear brand Allbirds to produce SweetFoam, a biobased EVA that now makes up all of the U.S. brand’s shoe soles. The wider footwear industry has enthusiastically adopted this oft-called “green EVA” after Allbirds made the recipe open source, and it can now be found in the shoes of brands like TOMS, Timberland, Puma and others. Foulkes-Arellano predicts that the entire footwear industry will have transitioned to bio-based soles within the next 10 years.

Glasses are another category where bioplastics have been widely embraced, with brands like Stella McCartney, Monc London, Randolph among the companies working with a wood-pulp-derived bio-acetate that is also biodegradable. (For more on that, read our acetate explainer.)

There are also some exciting innovations happening in the world of third-generation bioplastics, like American designer Phillip Lim’s collaboration with researcher Charlotte McCurdy on bioplastic sequins made from algae, created with textile R&D company Pyrates.

Are bioplastics recyclable, biodegradable or compostable?

It’s impossible to make any general statements about bioplastics, as the sustainability credentials change depending on the feedstock, the type of plastic it’s turned into, where it’s produced, and what it’s replacing. “Just because it’s bio-based doesn’t mean it’s biodegradable, and just because it’s biodegradable doesn’t mean it’s bio-based,” explains Holding. “There are many fossil fuel-based plastics that are biodegradable. In fact, the ones that are mainly used in biodegradable packaging are fossil-fuel based. It’s down to the chemical structure of the polymer itself and not the feedstock it comes from.”

This only adds to the confusion for brands and customers. “It’s something that manufacturers of materials will pitch to brands, then they might include it in their marketing materials, without quite understanding the distinction between these things,” says Holding. “This is a common misunderstanding and the public can get quite confused if something is marketed as biodegradable, and they think it’s bio-based, or the other way around.”

Commercially available bioplastics act just like any other plastic. When it comes to recycling, that means that drop-in bioplastics can be recycled, so long as the recycling facilities already exist to do so. It’s a different story if the bioplastic is a new material, however. “There’s a difference between it being theoretically recyclable, and whether it makes economic sense to collect and recycle it,” Holding says. “In many cases when you have such a small volume of something, even biopolymers like PLA which are growing and growing, but still it’s only a fraction of the market. Why would you set up a recycling plant just for this one very small stream of polymers?”

One of the biggest issues with the proliferation of plastics is the tiny microfibers that are shed when we wash and wear plastic fashion. Last year, a report by researchers from the University of California, Santa Barbara estimated that 5.6 million metric tons of synthetic microfibers were emitted from apparel washing between 1950 and 2016, with half of this amount emitted during the last decade. “Every time you tread a pair of Nikes or Adidas, you’re sending thousands of microplastics into the atmosphere,” says Foulkes-Arellano.

Holding agrees, pointing out that just because something is compostable, it doesn’t mean it’s certified to degrade in the ocean. “There’s an assumption that if something is biobased, then it’s going to be a solution to microfiber pollution,” he says. But a biobased fiber can still be eaten by — and cause problems for — tiny shrimp and baby sea turtles.

Can bioplastics be mixed with other materials?

Say you come across a pair of trainers partially made from bioplastic, is that better or worse than no bioplastics at all? “If everything is bio, it does mean less pollution and a lower carbon footprint,” Foulkes-Arellano says. Turns out, mixing your feedstocks could lower the carbon impact of a product, but it comes at a cost, leading to potential complications down the line.

“I’m concerned about the proliferation of materials without any focus on the end-of-life implications,” Holding says. Already, mixing polyester with wool and acrylic makes it impossible to recycle. We don’t yet know how mixing fossil-fuel plastics with bioplastic could affect fashion’s ambition for a circular economy.

Where will all this feedstock come from?

One concern about pivoting to bioplastics revolves around the reliance on agriculture to produce our plastic instead of fossil fuels. “The issue is we don’t want deforestation happening instead of fossil fuel extraction,” says Foulkes-Arellano. “Instead of it being a fossil-fuel plastic crisis, you end up having no trees and an overdemand for timber.”

So we can’t rely on one type of feedstock. “We have to be careful to use bits of everything, we can’t just go 100% into trees or 100% into castor beans,” Foulkes-Arellano says. That would be truly imitating nature, to have a diverse and varied eco-system of bioplastic production sources.

While research shows that the land share needed for the bioplastics industry will only make up 0.021% of the global agricultural area by 2024, it’s important that it grows sustainably. “Even though the land use share for biosynthetics is very low, solutions to reduce land-use needs and responsible land management are critical as the sector grows in popularity,”  a representative for Textile Exchange, a responsible textile non-profit that has a dedicated biosynthetic initiative, said by email. “Overall, there is no “best” feedstock — it depends on the specific local context, production practices, and application.”

The verdict on Bioplastics in Fashion and Sustainability

If you’re in the market for more sustainable sneakers or sunglasses, bioplastics can be a better alternative to petroleum-based ones. But as the popularity and availability of bioplastics grows, it’s likely that the greenwashing will too. Holding stresses that any growth should be driven by data, rather than green marketing initiatives.

“This rush to replace things with biobased needs to be tempered by evidence-based analysis, solid data, facts, and a consideration of the whole life cycle analysis,” he says. “I hope we’re moving away from fossil-fuel polymers, but it doesn’t necessarily mean we have to branch out into new things. I want to see feedstocks into a mixture of biobased and recycled, so we can in theory completely cut petroleum out of the equation.”

Our experts agree that this won’t work unless the industry invests in developing a truly circular economy that feeds bioplastics back into the system indefinitely. “Ultimately, bioplastics are a precious resource and the brands have to be responsible for getting it back,” says Foulkes-Arellano. And we’re quite a ways away from that kind of system.

At the end of the day, bioplastics are not going to solve fashion’s plastic crisis, but they could be part of a suite of solutions, coupled with reducing production and shifting away from plastic production altogether. 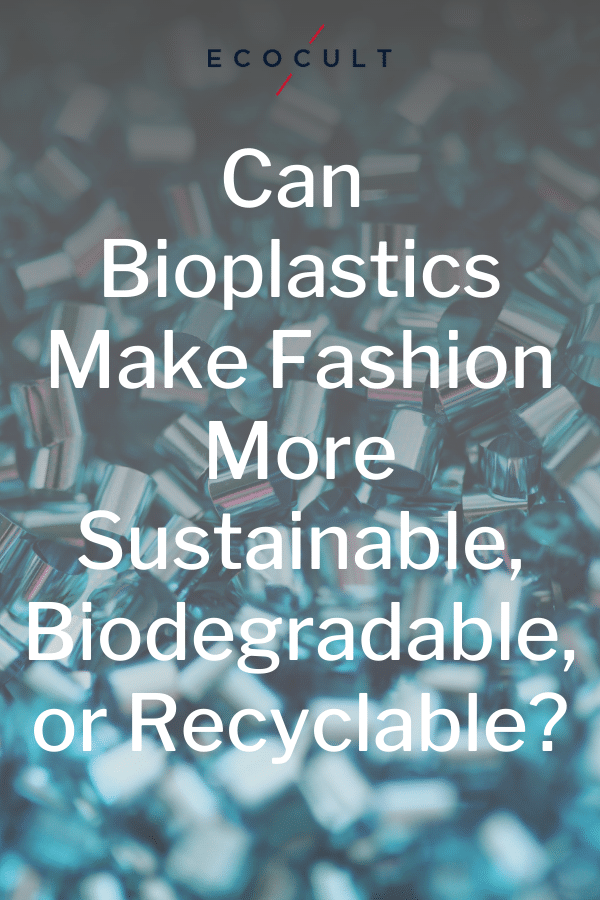 Our Guide to Natural and Non-Toxic Period Products