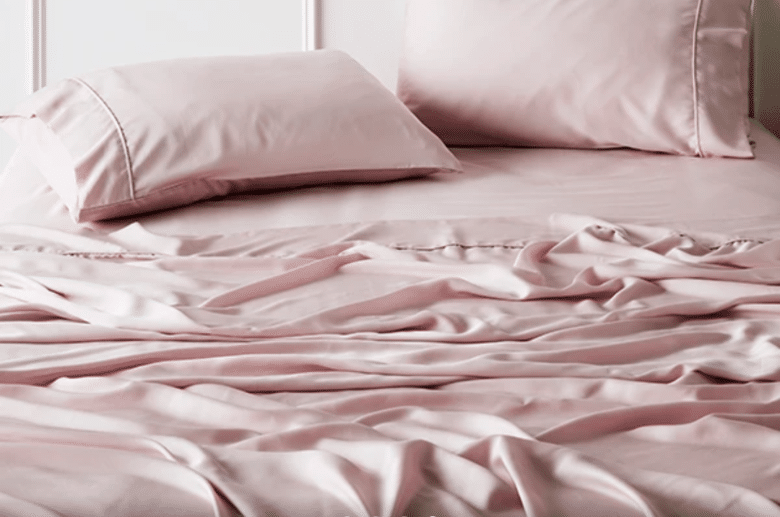 Image credit: Ettitude‘s bamboo sheets are actually lyocell made from bamboo, and are OEKO-TEX-certified.

The way ethical fashion brands promote bamboo fabric, you’d think that it’s a sustainable wonder material that’s revolutionizing the industry. Since becoming commercially widespread in the early 2000s, there have been countless claims about the benefits of bamboo fabric — from its purported antibacterial and temperature-controlling properties to its environmental credentials.

The truth is, bamboo has been so wildly misrepresented that a few years ago, the Federal Trade Commission cracked down on the greenwashing and fined brands like Amazon, Sears, Macy’s, Leon Max, JCPenney, and Bed, Bath & Beyond for misleading customers with their “bamboo” products.

Because of its supposed benefits, bamboo fabric is commonly used in sportswear, socks, underwear and basics, as well as towels and sheets. It has a good reputation as an eco-friendly fiber, but is it a sustainable silver bullet? Short answer, no. But, as with most things in the world of textiles, it’s complicated. Before we can dive into the complex answer to this question, let’s start with the basics.

Is bamboo an eco-friendly crop?

The vast majority of the bamboo on the market (70% according to this 2017 report) comes from China, where it’s been grown for centuries. However, countries like Indonesia and Vietnam are also major exporters too. It’s unique in that it doesn’t require pesticides or chemicals, and it’s the fastest growing plant on the planet — bamboo can grow up to three-feet in a day and can even be used to remove pollutants from soil, air and water through a process known as phytoremediation.

However, the ever-growing demand for bamboo, which has more than doubled since the year 2000, has led to the destruction of natural forests for bamboo crops. From a biodiversity standpoint that is incredibly worrying.

Bamboo is a big business in China. It was predicted in 2018 that the industry was worth $60 billion. Because it’s primarily grown in a country where supply chains are difficult to trace and human rights abuse in the textile sector has been a major issue in the last few years, it’s impossible to definitively say that this bamboo is grown and harvested ethically or sustainably.

“If we look at the risk involved [with bamboo], it’s not only from a social and human rights perspective, but also from an environmental perspective,” says Megan Stoneburner, Director of Materials at Textile Exchange. “We don’t have visibility and transparency down to the farmer level. That’s a huge concern… We don’t have exact data, nor do we have the certifications to steer best practices of growing bamboo.”

So while bamboo can be grown without pesticides and is typically a rain-fed crop, most of the safeguards or audits in place to guarantee this aren’t directly linked to bamboo for textiles — the FSC has a certification for bamboo, but it’s mostly concerned with flooring. There is also no way to prove that its harvest isn’t done using exploited or forced labor.

How do you turn bamboo into fabric?

There are two ways of turning bamboo from a plant to a textile. The first is mechanical, where bamboo is crushed into fibers, which are then spun into yarn. The result is known as bamboo linen, and it’s the far less common variety of bamboo fabric on the market, as the process is time-consuming and expensive (like linen or hemp). This is considered the only genuine bamboo fabric you can get.

“Most of what you’d run into in commercial applications is not really a bamboo fiber,” explains Ben Mead, Managing Director of the Hohenstein Institute America, which provides testing and, through OEKO-TEX, certifications for the textile industry. “It’s been processed as a man-made cellulosic fiber. It’s essentially rayon.”

Rayon is a family of fabrics that are derived from plants, with the most common types on the market being viscose and modal. Most rayon or viscose is made from trees. And how do you turn a hard, fibrous plant or tree into fabric? Chemicals, and lots of them. Caustic soda (also known as sodium hydroxide) and carbon disulfide are added to bamboo chips, creating a pulp solution that’s pushed through a spinneret and spun into yarn.

Despite not making it to the end garment wearer, both caustic soda and carbon disulfide are incredibly harmful to the environment and workers exposed to these chemicals. Carbon disulfide is a chemical that’s been linked to kidney disease, symptoms similar to Parkinson’s, heart attacks and strokes, according to the World Health Organisation. This Atlantic story from 2016 details the chemical’s early observed link to causing “acute insanity” in the late 1800s as well as causing birth defects and “menstrual disturbances.” Likewise, if inhaled or ingested, caustic soda can cause burns, corrosion and eye damage. If they’re not properly disposed of, these chemicals are dumped into riverways and can have disastrous effects on surrounding communities and wildlife. “This severely impacts wildlife as well as local communities’ ability to access clean drinking water and earn a living from activities such as fishing or aquaculture,” explains the Dirty Fashion report.

“It’s about chemicals management, and that’s key to all of this,” says Stoneburner. “How do we start to transform the fiber supply chain so that it is closed-loop and you’re managing the chemicals in a responsible way? We have to ensure that we’re not emitting those chemicals into the air, which affects workers, as well as making sure that water is being properly treated before it’s discarded.”

There is a less environmentally harmful way of making rayon – the lyocell method. Made in the same way that Lenzing’s Tencel fabric is made — without the highly toxic carbon disulfide — in a closed-loop production method. This means the chemicals needed to create the yarn are reused again and again, and water waste is kept to a minimum. Lyocell bamboo is considered a safer alternative to viscose bamboo rayon.

Currently, lyocell only makes up 4.3% of global cellulosic fibers (in comparison, viscose has a 79% market share), but according to Fashion For Good, it’s set to grow by 15% in the coming years.

What about the supposed technical benefits of bamboo fabric?

Super-soft, absorbent, antimicrobial, hypoallergenic, temperature-controlling, UV blocking — is there anything bamboo fabric can’t do? As a cellulosic fiber, we can’t deny that bamboo fabric does have some temperature regulating properties. And any tightly woven fabric will provide some level of UV blocking. But bamboo’s performance qualities above and beyond, say, cotton, aren’t backed up by science. “To be frank, a lot of that is misleading,” says Stoneburner. “Because finishes are typically applied that make those things, they’ve added in performance benefits.”

While it’s true that bamboo plants themselves have antimicrobial effects, this is stripped away when it’s turned into a fabric. “It’s normally associated with the oils within the plant,” says Mead. “So the more processing and the more you remove those oils, you end up with essentially cellulose, and cellulose doesn’t have that antimicrobial activity.”

Should you spend your money on bamboo clothing?

While bamboo seems to be a darling of small brands, the large ones aren’t very interested in it. “Based on my brand connections and insights, those that have a sustainability strategy in place, they’re not identifying bamboo as a solution,” says Stoneburner.

So what should we be using to make rayon if bamboo (or trees) isn’t the answer? Waste, Stoneburner says, like used cotton products, or agricultural byproducts. “You can chemically recycle waste streams into a man-made cellulosic fiber,” she says. “There are a lot of interesting concepts out there.”

Like with all materials, there are sustainable and unsustainable options on the market, so it pays to dig deeper and find out exactly what type of bamboo fabric a brand is using, from where it sources the material, and what certifications it has. Look for lyocell bamboo or bamboo linen over bamboo rayon, and when in doubt you can always ask the brand which one it uses. You can often find bamboo-specific brands (like BAM, based in the UK) breaking down the production and sourcing of their fabrics to help guide your decision-making.

Bamboo clothing isn’t going anywhere, so it’s important to push for transparency from all parties — from brands to the farms — to ensure bamboo is held to the same standards as other fabrics.  “The industry looks at bamboo as a way to diversify away from wood, but if that’s the case we need to have certifications and standards, traceability and visibility,” says Stoneburner. “It’s about building the same rigor and thinking about innovative, renewable, regenerative solutions.”

No matter what draws you to buying “bamboo” clothing — whether it’s the technical or environmental credentials — it pays to look beyond the marketing and vague claims to understand exactly what you’re getting.

We can say for sure, though, that it’s probably not all you were hoping for. 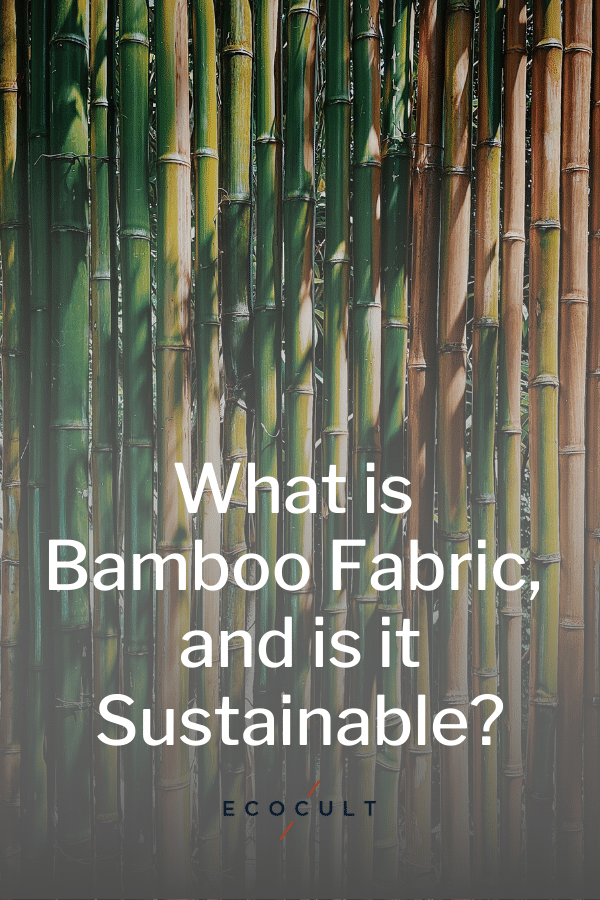 Going to a Baby Shower? Here Are Our Favorite Sustainable and Non-Toxic Baby Gifts