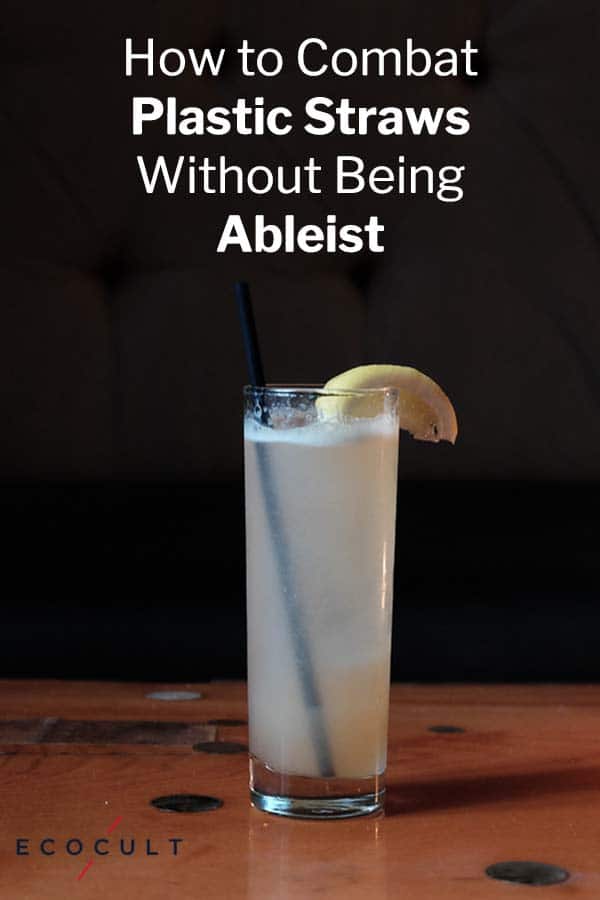 I would estimate that 95% of plastic straws are completely superfluous.

You don’t need them for iced coffee, most cocktails, juice, or water – and yet we get straws in all of these things as a matter of course.

Hurricane glasses, like the ones that resorts and restaurants like TGIFridays serve sugary piña coladas in, do need straws: they are impossible to elegantly drink out of without the straw – I’ve tried.  Stop using them, bars. And bartenders and baristas use straws to stir up cocktails and iced coffee. Come on, use a metal stirrer.

Straws are in fact the seventh most commonly collected type of plastic during beach cleanups. They’re the first on resort-heavy beaches, as I heard from an eco-friendly resort in the Dominican Republic.

This is why environmental advocates are focusing on straws. They’re a problem for the ocean, with a very compelling mascot, the sea turtle. Unlike a lot of plastic, it seems easy to get rid of them. And it’s a consumer-facing issue that can act as a gateway for people into broader anti-plastic and environmental activism.

There are situations, though, in which you do need a straw: mojitos and mint juleps (the sugar sinks to the bottom and you get a face full of mint and tasteless soda water if you try to sip from the top of the glass), smoothies (too easy to dump smoothie liquid on your face), and if you have a disability that limits your range of motion.

And this is where a war is brewing between two different camps of progressives: the anti-plastic, zero-waste, ocean-loving activists; and the disability advocates. While the former are cheering the quick spread of plastic straw bans around the world, disability advocates are saying, “Hey, wait a minute. I need a straw.”

I’ve recently noticed that whenever someone admits on social media that they’ve produced any waste for a legitimate reason, such as taking medicine or being a human being who has a complex and messy life, environmentalists and zero-waste enthusiasts (not the leaders of the movement that I’m friends with, more like their followers) do this thing I call the, “You Can/I Just” cliché.

“I just eat strawberries for anti-inflammation.” “You can send the packaging back to the company.”

No, eating strawberries does not help with IUD insertion or a sore throat. And sending packaging back to manufactures does diddly-squat except steal your precious time. (Those are real examples, by the way.)

In the case of people with disabilities saying they need straws, they hear, “You can use a metal straw.” “I just carry a reusable straw.”

This cliché drives me up the wall, and I’m a privileged, ably-bodied person of means with a flexible schedule. It takes the very real challenges that face anyone who wants to produce less waste or use less plastic, and instead of acknowledging that challenge and wondering what we can do as a society to address it, it twists it to make it about the person’s lack of willpower, effort, or imagination.

“You can/I just.” For people with disabilities, this righteous advice gets them really in a huff, because honestly, stop telling them about things they’ve probably already tried and that entail more work and time that they don’t have.

Half of the disability life experience is having non-disabled ppl give suggestions like they innovative/creative when we’ve spent hours of our lives explaining to EVERYONE and their mother why their ‘helpful’ suggestions don’t work. #SuckItAbleism

But still. We find ourselves in a situation where straws aren’t used just for mint juleps, smoothies, and situations in which someone with a disability wants to enjoy a hot green tea. They’re used for everything. And it’s an exhausting, lonely battle to try to remember to say “No straw!” before you order literally any beverage ever, because you just never know. Orange juice? Pisco Sour? A glass of tap water? A soda can? All places in which establishments shove a straw without asking. And even if you do remember to say, “No straw,” the bartender forgets and puts a straw in anyway.

Clearly, our current opt-out system is not working.

But, there’s still a lot of debate about the best way to go about this task without putting an additional burden on our most vulnerable members of society. So let’s run through and consider each of our options for vanquishing straws:

Ideally, we would test out some combination of #4, #5, and #6 in various cities, and see what gets rid of the most straw waste in the least stigmatizing way for people with disabilities. We’re at the beginning of this movement, so we’ll have to learn and adjust as we go.

So, What Can You Do Now?

An Easy Way to Find Sustainable Hotels in Brussels, Belgium