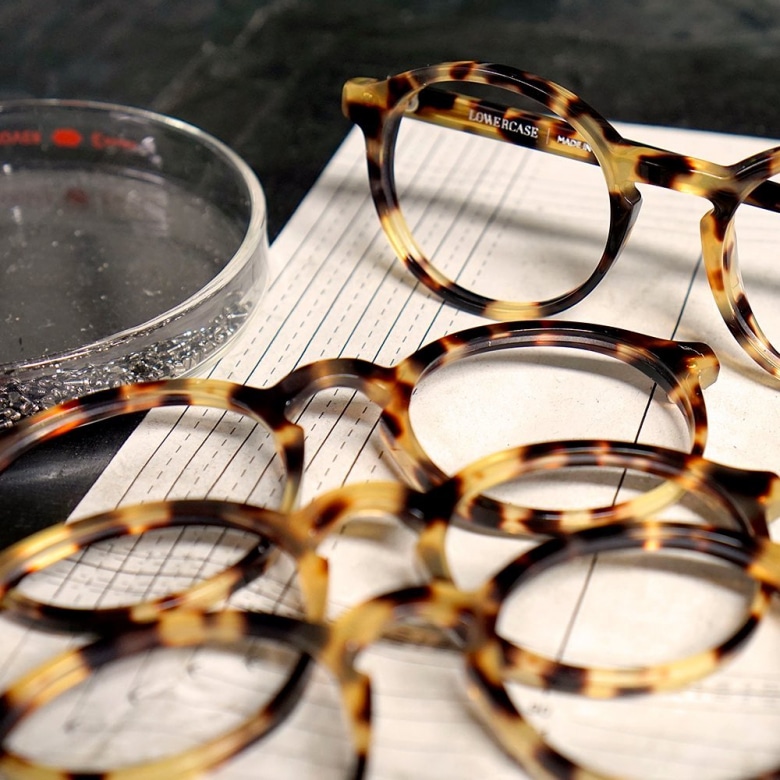 It was arguably a sea turtle that launched the plastic-free movement. A 2015 YouTube video of marine biologists pulling a bloody straw out of the nose of a terrified sea turtle led to calls for plastic straw bans, which morphed into proposed bans of all disposable plastic in countries ranging from India and France to Peru and Canada.

But few people know that it was a special type of plastic that helped save the hawksbill sea turtle from extinction.

Hawksbill sea turtles are graced with a stunning striated shell that, unfortunately, makes for luxurious jewelry, hairpieces, and glasses. Nine million hawksbill sea turtles were scooped out of shallow tropical waters around the world between 1844 and 1992. This might have continued if European scientists hadn’t invented a plant-based plastic called acetate at the turn of the last century. By the 1950s, manufacturers were churning out a tortoiseshell dupe possessing a depth and richness of color that, along with an international treaty in the late 1970s banning the hunting and sale of hawksbills, gave the critically endangered sea turtle a chance at survival.

Now you can get acetate earrings and sunglasses not just in classic tortoiseshell, but in an infinite number of colors and patterns, ranging from black to Caribbean turquoise to clear with a hint of pink.

But as global citizens are confronted with images of plastic spilling out of the guts of whales and, yes, sea turtles strangled by plastic, conscious consumers are taking a second look at their plastic sunglasses. Some brands like Proof Eyewear have tried switching to sustainably harvested wood. The South African brand Ballo adds in offcuts of African print fabric sealed with a bio-resin, for a stylish twist. Others like MONC London and Just Human replace plastic lenses with glass lenses, which have the added benefit of being scratch-resistant.

In fact, a lot of “sustainable” sunglass companies spend a lot of time crowing about their bamboo and then gloss right over the acetate part. Nothing to see here! Look over there! Trees! A charity program!

So, what is this mysterious acetate? How is it made? And will it biodegrade if it falls off your head into the ocean while you’re sailing? I myself had actually been confused about these questions for years, but I dug in to finally get some answers. What I found shocked and then fascinated me.

What Is Acetate and How Is It Made?

Acetate is a cellulosic material, which makes it a close cousin to rayon viscose (which I’ve also done an explainer on. You should consider reading it if you haven’t yet and then come back to this). That means that it’s a semi-synthetic material: plants have been turned into a man-made material.

Eyewear brands like acetate so much because unlike injection-molded poly-plastics (used for sport and cheap promo glasses) acetate is hypoallergenic. More importantly, it’s thermoplastic, which means your optician can heat the frames and bend them to perfectly fit your face. “The glasses actually get better with age,” says Brian Vallario, co-founder of the boutique sunglasses brand Lowercase, one of the few plucky brands — along with State Optical Co. in Chicago and Kala in California — who’ve made a go of manufacturing acetate frames stateside.

Vallario had invited me to see the sunglasses-making process at Lowercase’s one-room Brooklyn factory, where employees work alongside machines that carve, heat, stamp, inject, embellish and polish their high-end frames to perfection. “They can be readjusted, repolished, reworked,” he says. “The colors and patterns that you can achieve with acetate from a pure design perspective are way nicer than injection molding.”

Lowercase glasses likely started their life in Tennessee, where the chemical company Eastman takes FSC and PEFC-certified sustainably sourced wood pulp and dissolves it into an acid called acetyl in a closed-loop process, producing a fluffy white acetate flake. Some of that powder is shipped to Italy to the famous family-owned Mazzucchelli factory, where it’s turned into a clear goop, dyed, and chopped into pellets, which are hand-mixed to create a pattern and baked into acetate blocks, which are bought by high-end eyewear companies.

Acetate is chemically intensive to make. There are three acids needed for this process: acetic acid, acetic anhydride, and sulfuric acid. Acetic acid (vinegar) and acetic anhydride are reportedly quite mild and commonly found around the home.  Sulfuric acid can be dangerous at high concentrations and when heated. Yes, a typical sheet of acetate is plant-based, but the other 40-ish% is petroleum-derived chemical UV stabilizers and plasticizers, including the dreaded toxic phthalates, hormone disrupting chemicals which have been linked to breast cancer, asthma, and neurodevelopmental issues.

In 2010, in response to these concerns, Mazzucchelli introduced what they call M49 or bio-plastic, a more sustainable acetate sheet made with 68% plant-based ingredients. It’s also biodegradable. It’s still a tiny percentage of the overall market, but you’ll find it in eco-friendly sunglasses by Stella McCartney.

If the acetate is expressly bio-acetate or manufactured in a regulated environment (for example, Italy, under the European Union’s strict REACH chemical guidelines), then you can be fairly confident that the workers are protected from harm.

But according to Lowercase’s Vallario, many cheap eyewear factories in China will cut costs by polishing and gluing with acetone, the main ingredient of nail polish remover, which can cause eye irritation, vomiting, cardiovascular failure, and even death at high and long enough exposure. Eastman and Mazzucchelli both say they extend the health and safety standards of their home countries to their factories in China. But whether all Chinese workers at other factories receive adequate ventilation and protective gear, nobody could tell me. Not a good sign.

There’s also not a lot of information out there on this topic either. This article is incredibly dense, but seems to be the best scientific review available. I’ll save you the headache and summarize. It says that acetate films and fibers (very thin and tiny pieces of acetate) will biodegrade eventually, though how long it takes them to degrade depends on where they are discarded: in the soil, in water, in an anaerobic environment (a landfill), in sunshine, amongst the right microbes or not. Oh, and adding plasticizers can help it degrade faster. There’s that environmental trade-off issue again.

A cigarette butt filter made of acetate can apparently take anywhere from 18 months to 10 years to biodegrade. This report says that acetate will degrade, but too slowly to be officially certified or called “biodegradable.”

If you drop your sunglasses in the ocean, when they do eventually biodegrade, they will leech fossil-fuel based toxic chemicals into the environment. When I ran my hands through a small bucket of colorful acetate waste pellets in the sunglasses factory and mad a joke about a side business selling them to aquarium stores, Vallario said, “I don’t know if I would want my fish swimming around in this stuff. All the oils from the material pull out of it and then you get these really nasty films in the water.”

Bio-acetate, which is created without use of petrochemicals, could be better than plastic, which can take hundreds of years to dissolve into the soil or water. But in the meantime, the acetate bits absolutely can get eaten or choked on by a marine mammal. So they’re not a perfect solution. Just a less-bad one.

Can You Recycle Acetate Sunglasses?

One of the biggest environmental issues for eyewear is waste. Up to 75% of acetate is typically wasted by an eyewear manufacturer, according to the UK fashion network Common Objective. Mazzucchelli has started scooping up cut pieces and recycling them into black sheets of acetate, and Lowercase gives some of its waste to local artists. But most of the industry’s waste acetate goes right to the landfill.

Technically, recycling acetate is possible. When I was in Brussels at the Paradise City festival, a small local nonprofit showed me a block of acetate that had been created from recycling old cigarette butts — it looked a lot like the material in tortoiseshell glasses, actually. However, right now there is no service in the U.S. that will take your old frames for recycling.

The Swedish sustainable eyewear brand EOE has figured out how to take old acetate frames, chop them up into tiny pieces, and press them into funky patterned blocks of acetate, all in their factory in the north of Sweden. Sorry zero-wasters, the only way to get them your old frames is to drop them in a box at a Synsam optometry store in Scandinavia. But you can sign up to be notified when you can pre-order a pair of recycled Regrind glasses.

Otherwise, the best thing to do with your old acetate glasses frames is to use them for as long as possible. If the lenses are scratched, you can get them replaced through Boomerang. Or if you really can’t stand them anymore, donate them.

The most surprising thing I learned during my journey through the eyewear world is that a pair of well-made acetate glasses are a type of slow fashion. Here’s what to look for:

At the Lowercase factory in Brooklyn, Vallario showed me some vintage 80s acetate blocks in a striped grey pattern. As a tiny company, Lowercase likes to buy deadstock acetate blocks from Mazzucchelli that were sitting around unloved. I watched a robotic arm pluck a rectangle of acetate from a tray, place it inside a lit metal box, and slide closed the door. Another arm deftly carved the block into the rough shape of an eyewear frame. Vallario next showed me the large, old-school wooden barrels filled with wood chips, where they tumble the glasses frames for a day to polish them.

“They’re beautiful,” said Lowercase’s Vallario, pausing to introduce me to a craftsman who was hand polishing a pair that sell for $350 on the site. “They might cost a little more, but the cost per use over time is much lower. If you’re buying a pair of glasses and you love them and can live with them for two or three years, then you’re reducing your consumption, and reducing wasted plastic.”

The sea turtles would approve.

Sustainable Banking: Why Your Money Might Be Furthering the Climate Crisis