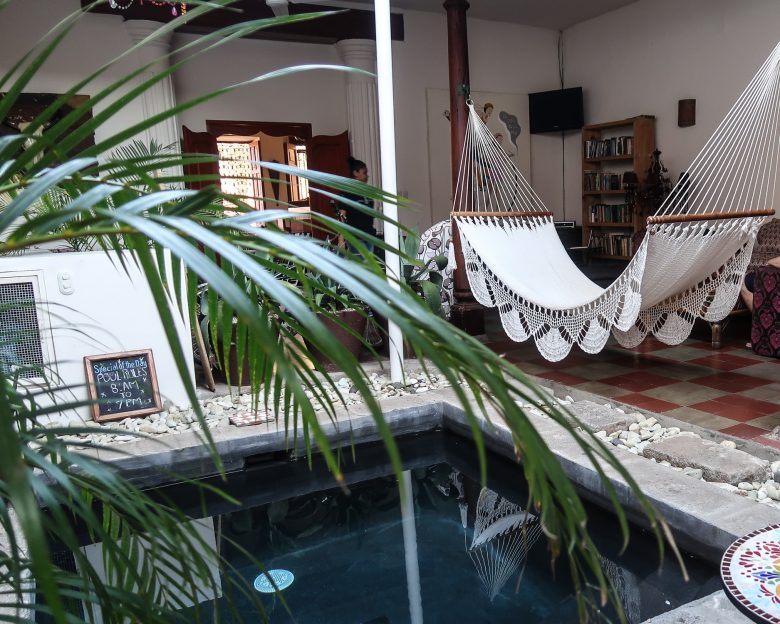 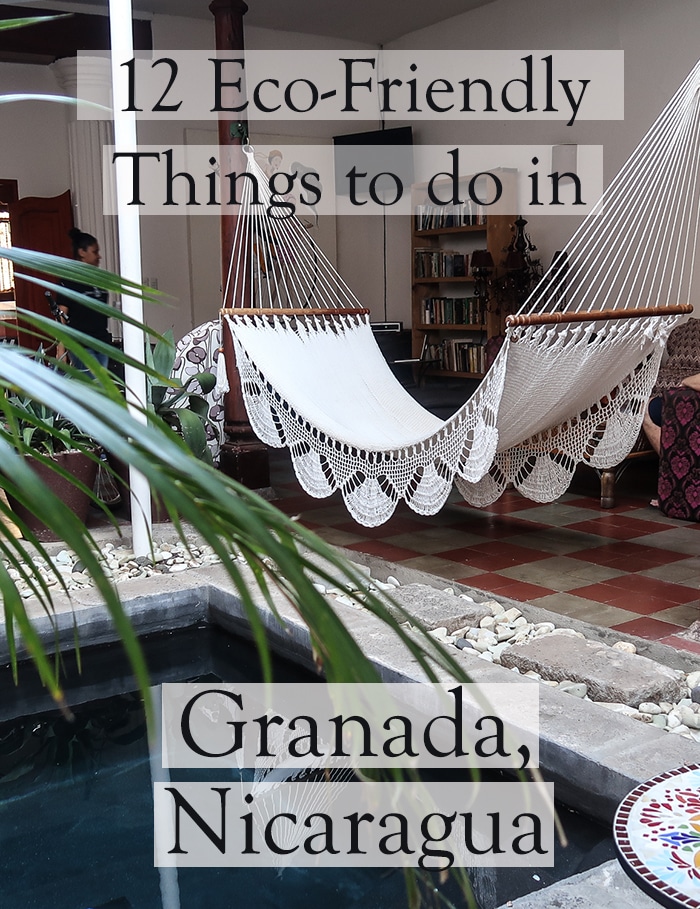 Granada, Nicaragua may not be the first place you think of when it comes to sustainable travel. But in actuality, the Central American country is filled with eco-friendly hotels, restaurants, and excursions for the conscious traveler or nomad. I recently lived in Granada for a month and absolutely loved its beauty and character. The colonial charm of the small city combined with the lush greenery and fresh water surrounding is hard not to fall in love with!

There are a few things you should expect when visiting Granada. First, tourism is the #1 industry there, so locals rely heavily on people like you spending money. Tour guides will constantly try to get your attention on the street, vendors with baskets filled with little trinkets or plantain chips will offer you their goods while you’re eating dinner at a restaurant, and taxi drivers will try to charge you more than they should because you’re a tourist. Just smile and say no thank you and most of the time they will smile back and move right along!

A couple of the good things about tourism being such a big part of the city’s economy: you can get by without being able to speak Spanish, and there are a lot of easily accessible (and inexpensive!) excursions you can go on (and the tour guides are extremely helpful and friendly).

(PS. You might also be interested in the best artisan shops in Granada, where to get sustainable and healthy food, and where to get good coffee in Granada.)

Secondly, one of my favorite parts of Nicaragua is the slow pace of life. The local people work really hard, but they know how to relax too. (There are hammocks everywhere for your afternoon siesta.) The locals seem to be less obsessed with stuff, and more content with what they have, prioritizing things like family, community, and rest. Things are simpler in some ways: I never felt the need to wear makeup or do my hair (well, it was too humid to anyway!), and you can also get a lot more bang for your buck if you do things right.

Third, if you really want to make your stay in Granada more sustainable, I would suggest bringing your own water filter. It’s not safe to drink the water there, so if you don’t bring your own filter, you might end up going through a lot of plastic water bottles. I used my GO Berkey, which gets rid of everything nasty in the water and fits in your suitcase!

Here are some of my favorite eco-friendly places to stay, foods to eat, and things to do in Granada:

Walk: The central part of Granada City is pretty compact. The ability to walk everywhere, whether we were going to the grocery store, the gym, out to eat, or to the pharmacy to pick up some much-needed bug spray, was one of my favorite parts about staying in Granada. As long as your hotel or Airbnb isn’t on a remote island, the only time you will have to use a vehicle is for excursions. 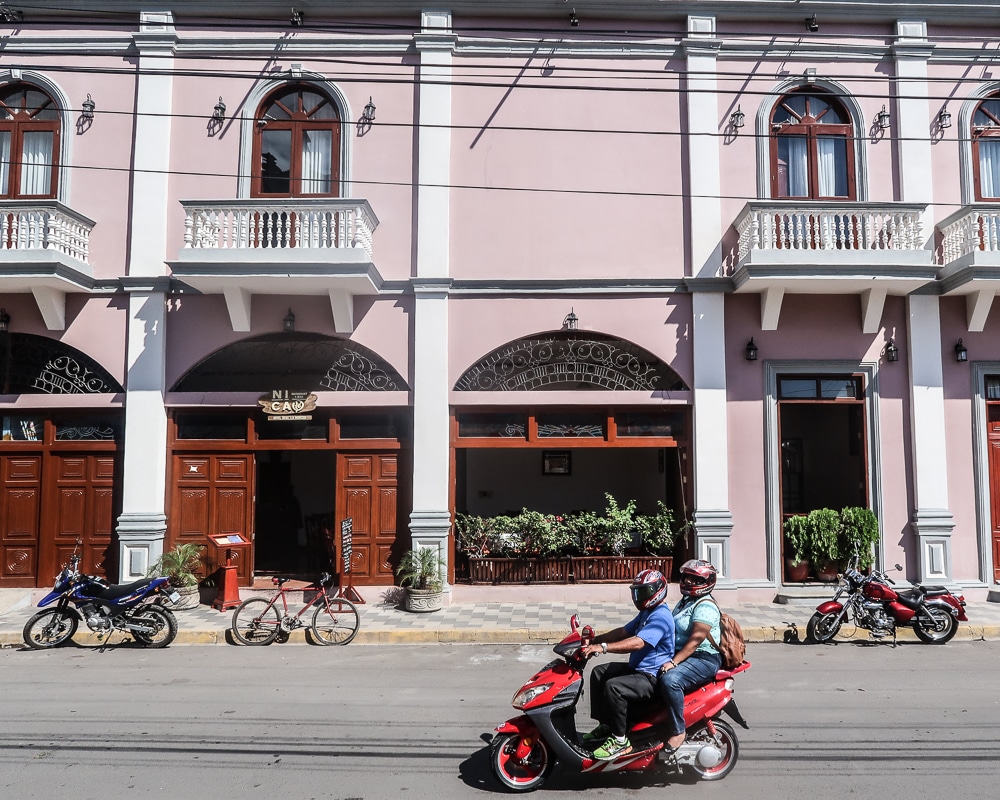 Bike: Bicycles are everywhere in Granada, and I was continually impressed by how talented the locals were at riding bikes with two or three people on them or while carrying a large load of goods. Bikes are readily available to rent if you want or need a faster way to get around the city.

Motorcycle / Moped: Motorbikes are also very commonly used by the locals and you can easily find a place to rent one.

Taxi: When you have to get somewhere further away, there are plenty of taxis available. You can get from one side of the city to the other for 10-20 cordobas ($0.32 – $0.65 USD). Using taxis is a cheap and easy way to support the locals!

Eco-Friendly Things to Do in Granada 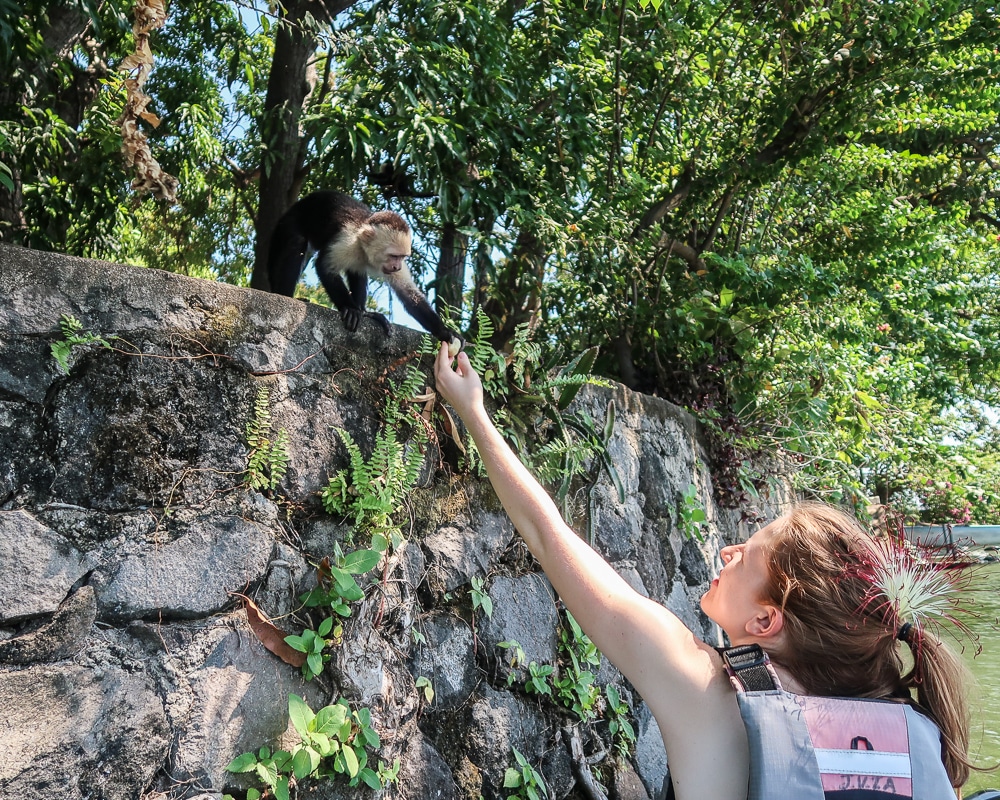 Kayak Las Isletas: This was one of our favorite activities. Las Isletas de Granada are 365 absolutely beautiful tiny islands right outside of the city that were formed about 25,000 years ago when the nearby Mombacho Volcano had a violent eruption and spewed huge rocks from its core into the lake. We went with a tour company and had our own private tour guide who took us around the islands and taught us all about the history, the animal life and vegetation, and what the islands are used for nowadays. (Most of them are either owned by rich families who keep their vacation homes there or by local fishermen who have passed down the islands from one generation to the next.) At the recommendation of our Airbnb host, we booked our adventure through Buena Tour, and had an amazing experience. The lake and the islands were breathtaking, and we even got to feed the CUTEST monkeys who live on one of the islands! 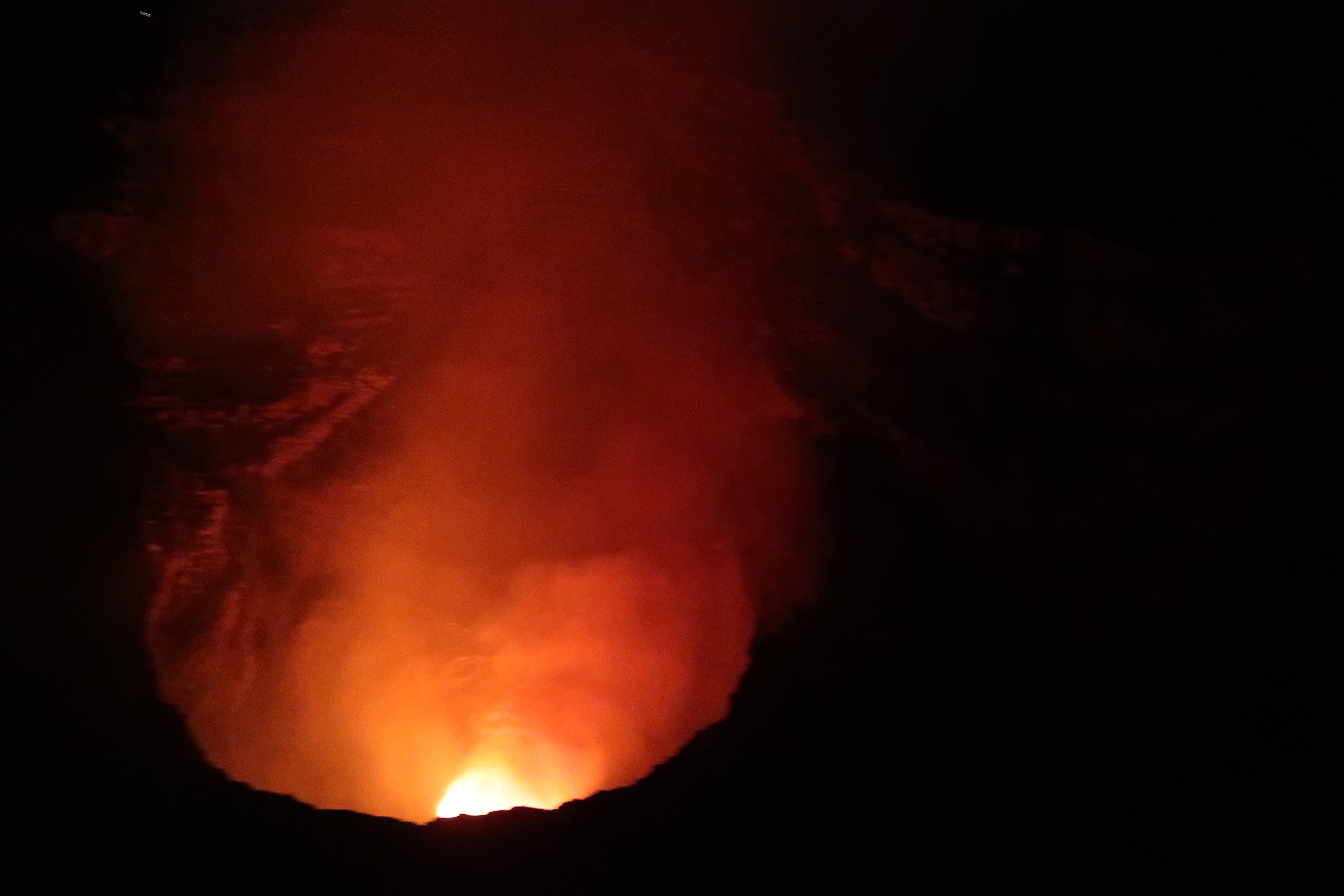 Nighttime lava tour at Volcán Masaya: It’s not very often you can look down into the inside an active volcano, watching the lava bubble and the steam rise up toward you! But, set your expectations for this one: you might end up sitting in a long line of cars to get up to the volcano, and then once you’re up there, you’re only allowed to stay for ten minutes before heading back down. Still, it was an experience I would recommend doing at least once! 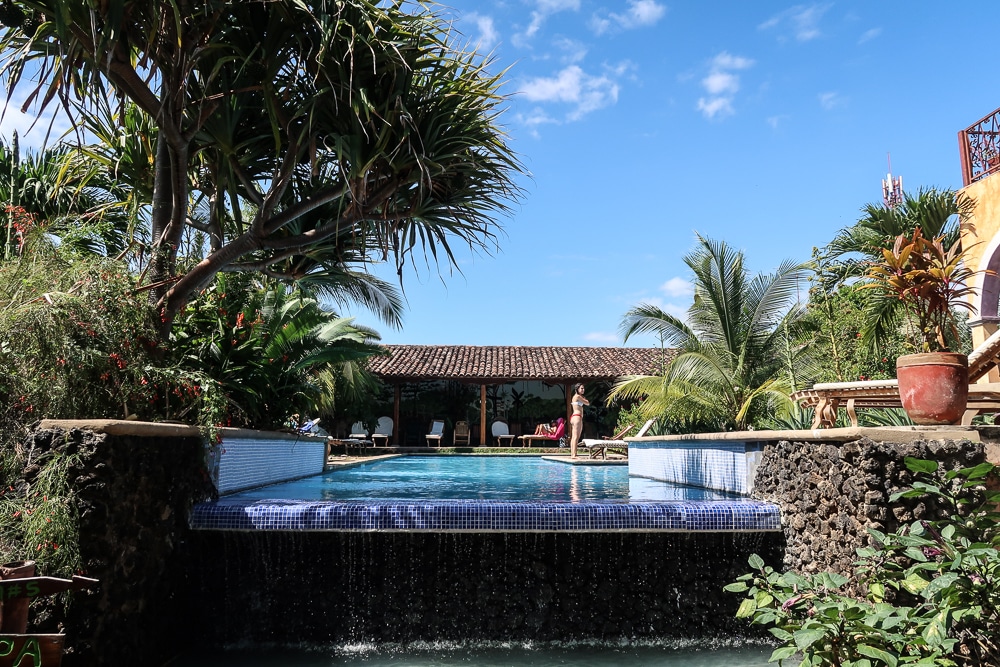 Visit the Chocolate Museum: The ChocoMuseo offers free tours, all-you-can-eat brunch, and bean-to-bar chocolate making workshops. I personally can’t recommend the brunch (except for their giant-vegan-coconut-chocolate-iced drink), but the free tour was fun! I’m a chocolate fiend, so I enjoyed learning about the history of chocolate, the process of making chocolate in a sustainable way in Nicaragua, and eating a lot of samples. The tour is definitely meant to get you to buy something, and I was happy to buy their amazing chocolate tea, which is made from the husks of the cocoa bean. They also have a hotel, a ChocoSpa where you can get a chocolate massage (yep!), and an amazing pool and bar where you can hang out and soak up the sun (even if you’re not staying at the hotel). Be careful though… you will eat a lot of samples and then have a brutal sugar crash a few hours later! 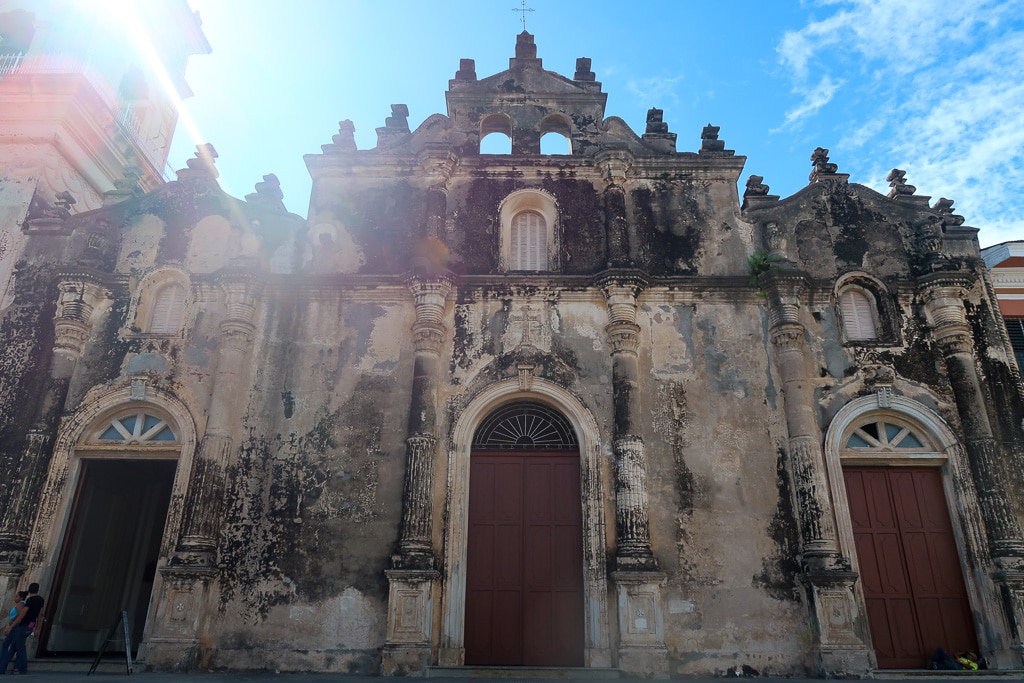 Tour the Churches: There are several really gorgeous churches within the center of Granada, and it’s worth going in and witnessing the beauty of their architecture, stained glass, and painted ceilings. Some of their exteriors have been restored, while others display the leftover burns from when American William Walker forcibly took over the Nicaraguan presidency in the 1850s. Most of the churches are open to the public during the day, and you can pay a dollar to go up into the bell towers and get a gorgeous 360 degree view of the city.

Workout at PURE: There are several gyms in Granada, but we went to PURE for our workouts for a few reasons: They have a weight room and cardio equipment, but also yoga classes–some of which were taught by residents from around the world–and other types of cardio and acro classes as well. They also have spa services, a vegetarian cafe, and a sweet mascot named Snoopi who is a giant tortoise! 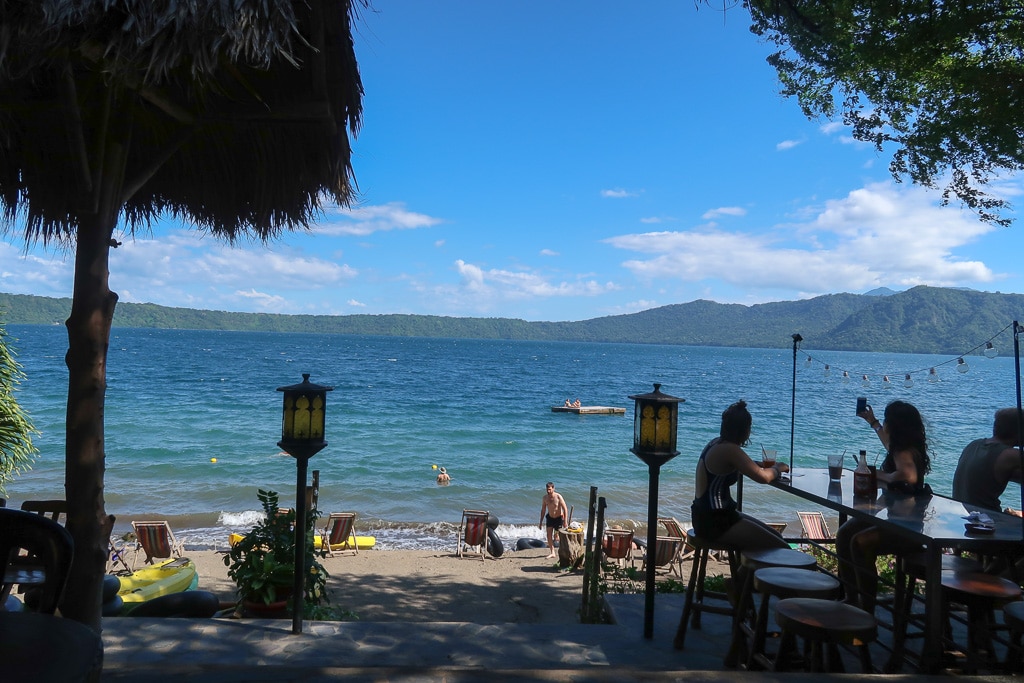 Laguna de Apoyo: I highly recommend you take a day trip to Laguna de Apoyo. It is in the crater of an extinct volcano and it is the warmest and cleanest lake in Central America (and it really is!). We purchased a day pass at Hotel Paradiso where we went kayaking around the lake, laid on the dock, floated on intertubes, and enjoyed some excellent food and drinks at their restaurant.

Coco Berry Spa: Get a massage, organic facial, or mani/pedi!

Make your own chocolate on a sustainable farm: We didn’t actually get a chance to do this, but I really wanted to!

The Best Healthy and Sustainable Restaurants in Granada, Nicaragua